Last week, a friend showed up on our doorstep. He was there to go to a birthday dinner with us, the sort of thing that was commonplace two years ago but slipped into the realm of impossibility over the last 14 months, and now, somehow, is possible again. The dinner was on a restaurant patio, the tabletops adorned with dispensers of foul-smelling hand sanitizer, the servers wearing masks. I threw up from motion sickness on the drive there, because my body has forgotten how to be in cars. But other than that: normalcy, or something resembling it.

When our friend arrived at our door, Rand looked at him and said, “Hey, guess what? We’re all fully vaccinated.” They’d gotten their second shots on the same day, and the CDC recommended waiting time for antibodies to build up had elapsed. They hugged on my porch, and I stared like I was watching a documentary, something beautiful I was removed from, before I realized I didn’t have to be simply an observer. I threw myself into the hug as well. We stood there on the porch, and another friend who is staying with us (another once-commonplace event made impossible, etc., etc.) saw the exchange and said, casually, “Oh, are we group hugging?” throwing her arms around us all. 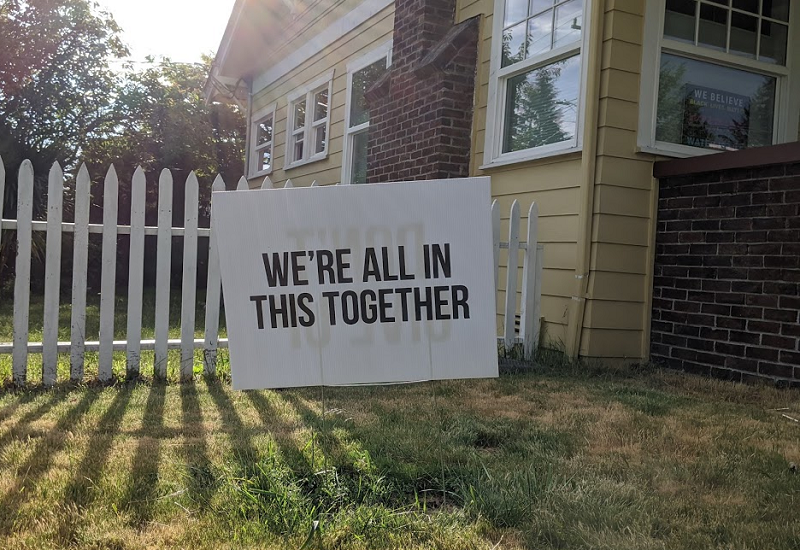 My local grocery store had signs saying that fully vaccinated customers didn’t need to wear masks, based on the recommendation of the CDC. We all still wore them anyway. A few days later, they took down those signs, and replaced them with ones saying, basically, “Nevermind, keep wearing the masks, please, the CDC has no idea what’s going on.” For me, nothing had changed. I even had a dream about it, the old cliché about going to school naked, updated for the pandemic age: I was indoors, in public, without a mask. I kept apologizing to everyone, woke up relieved it wasn’t real. A few days later a maskless woman at the Goodwill berated me for wearing plastic gloves to pick through the shelves (something I do whenever I shop there, not because of Covid, but because I once found what I hope was cat poop on a sweater). The CDC ping-pongs back and forth. No one seems to exactly know what to do. Are we wearing masks? Are we hugging? Is it safe to eat indoors? Is this the end or just a lull? Why didn’t I tell that woman to shut her stupid face?

Later in the week, we went out to dinner again, this time eating indoors for the first time since February of last year. Our friends met us outside, and the hug we fell into was effortless, so that I didn’t even realize it at first. For a second, I’d forgotten to be amazed by this foreign thing, of stepping into the sacred six feet of space around one another. 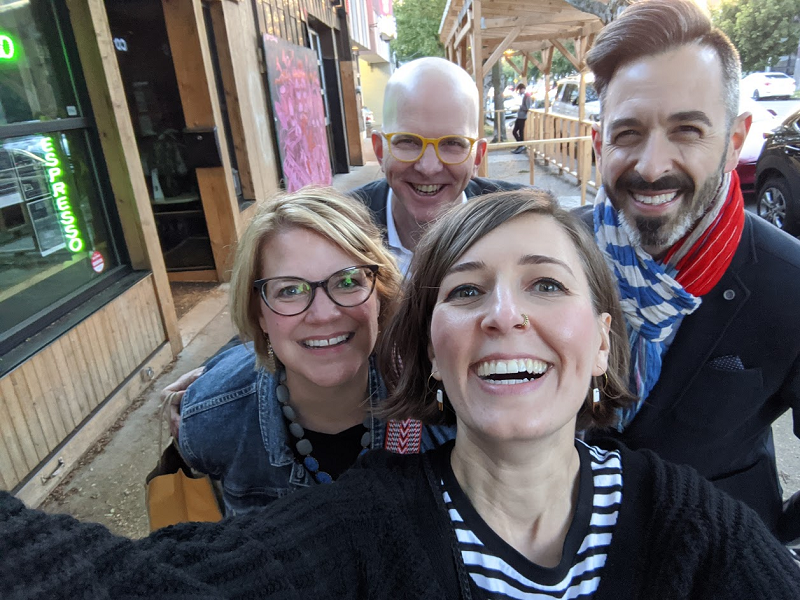 Someone asked how I was doing, and in the aftermath of my second shot, I told them I could not stop crying. “Just openly weeping at everything,” I said. “I don’t really understand it.”

“Oh, me too,” they replied. “I read something that said it’s not PTSD we’re dealing with, because PTSD is for things that have passed. And this is something that we’re still in.”

There is the truth of it. The world is opening up, or parts of it are, at least – slowly, cracking open like a window left shut too long. The wind rushes in, that flash of fresh air, but I’m still hesitant to take a breath. I’m told this feeling is “social re-entry anxiety.” (We already have a name for it, for this nervousness about stepping back into the world.) More people are set to die globally from the pandemic in 2021 than 2020. Things are far from over, and trauma, as Ed Yong notes in The Atlantic, is lingering and unpredictable. Experts (in my mind’s eye, a group people in lab coats, against a dark and infinite background, holding clipboards) say that this wasn’t it. That the real big one is coming. I try to stop my imagination from going to dark places. I’ve read Station Eleven too many times.

“These next three weeks of summer are going to be great, until the variant hits,” a friend teases, and we all laugh and wince simultaneously. It hits too close to the fear that stops us from enjoying these moments thoroughly: we’re afraid of everything being snatched away again.

I try to be in the moment, but it’s hard to know exactly what this moment is. Seeing the light at the end of the tunnel doesn’t take away the fact that there was a tunnel to begin with. When you’re in it, your only focus is on getting through to the other side, more or less intact. It’s only afterwards, blinking in the light, that you have a second to turn around and think, well … that was awful. That’s where I am now: looking back at the dark we’ve just stepped out of, trying to acclimate to the brightness, and wondering if – and how long- it will last.