I got my first vaccine shot on Easter Sunday, prompting all sorts of blasphemous jokes about being resurrected from lockdown, though it’ll be another five weeks (three to my next shot, and another two after that) before all those little antibodies build up. I felt fine in the aftermath, and still do now, though this to be expected after your first shot. It’s like tequila. The first one is fine, and makes you feel invincible, and you feel an inexplicable but intense love for everyone around you, especially those who gave you the shot or took one with you. It’s really the second shot that takes you down.

Vaccines are rolling out – slow at first, and now a steady trickle. My friends and I keep checking in on one another as we have for the last year, though the topic has switched from “You hanging in there?” to “Any side-effects?” We’ve become a little bit like science experiments, marigolds clipped to electrodes. I have many hypotheses about what the effects of the world opening up again will be like after more than a year of trauma and death and lockdowns and the politicization of basic science. In the words of Jessie Spano, I’m so excited, and I’m so scared. 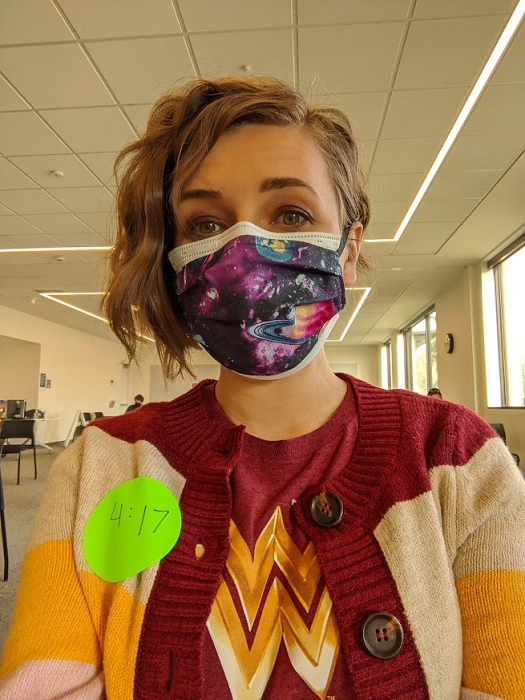 “Do you have your superpowers?” a man asked me as I left.

I remind myself of the luck and the privilege that allowed for this, with having internet and a governor who wasn’t corrupt, with having access and the ability to book my shot.

All wanted to get vaccinated but didn’t know how to navigate appointments, transportation. Might sound easy, but for many, it’s not.

Rand was giddy about it when I came home – “I can’t believe it,” he said. I couldn’t either. When we went into lockdown last March he told me we’d be through by August.

“Six months, tops,” he said. By my birthday at the latest.

The time came and went. I turned 40 in lockdown, argued that it didn’t count while the skin under my neck flappingly disagreed. His grandmother died. My nephew started to walk and talk. My friends had babies. Time passed at the same time that it stood still, and I watched a lot of TV. When talk of the vaccine started, Rand said we’d probably not be able to get it until the end of summer, and he was wrong again, but this time in the best way. When that needle went in my arm I almost cried, not from the pain but because I realized I had been carrying all those damn tears around, everywhere I didn’t go.

“I need you to know,” I told him, “about some of the side-effects of the vaccine.”

“I might get cranky if I don’t snack regularly.”

“That one seems to be unfortunately permanent.”

“And we’re going to attribute that to the vaccine, are we?”

Other things that, in the last two days, I have claimed were side-effects to the vaccine:

So, that’s where I am. Normalcy still feels elusive and I miss everyone and everything. If I think too hard about it and the last year, my eyesight gets all watery, and it makes it hard to see, but still – there it is, that stupid light at the end of that stupid tunnel, forever too late for some of us.

“It’s a side-effect,” I say into his shoulder as we sit on the couch.

“Okay,” he replies, and puts on a show. It makes me cry, but what did I expect?