Six months into an interminable lockdown, I find myself missing the long dead. The throughline feels like a logical one – it’s a pandemic. Of course I’m thinking about death.

A few people have told me that those of us defending the United States Postal Service don’t care about the institution, but I have always regarded it with a level of fondness that one does not normally attribute to governmental institutions. It’s like finding yourself waxing poetic about the passport office or the IRS. They shouldn’t elicit an emotion other than a bit of ennui, perhaps a cold feeling of dread.

But the United States Post Office is the reason I knew my father.

To understand the role it played in our relationship, you’d have to understand a few things about my father, and me. We never lived together. I never once shared an address with him, or even a home continent. My father lived in Germany for my entire life, and I lived in America. He never had an email address, even after they became popular. He was not a huge fan of phone conversations, either.

The main way in which my father and I communicated was through letters. He would write me, regularly, beginning when I was so young that my mother had to read them to me, until a few years before his death. Thick envelopes would arrive, and he’d number the pages in order to keep them straight.

My father did not alter his message for his audience. As a very small child, I received sheet after sheet written in cursive that I could not yet decipher. Complaints about his work, detailed accounts of the weather in Munich, mentions of friends of his that he’d known for decades who I had never met. He signed every letter the same way.

He was generally annoyed with everyone, mostly wanting to be left alone. Letters were the only way anyone could really be with him without having to actually spend time with him – which is how he preferred things.

I tried to test the waters, calling him “Daddy” once or twice, as I’d seen my peers do with their own fathers, but when I said it, it read as sarcastic. My father was not a sentimental person. He was not warm. He did not enjoy children. When I was young, I resented his coldness, and seldom wrote. He was not happy about this. (He let me know via letter.)

I saw my father once between the ages of ten and fifteen. Again when I was 16, once more when I was 19. But his letters arrived monthly. He was retired military, but maintained a post office box at the base, which meant I didn’t need to pay international postage rates. It cost as much to reach my father as it did to reach someone in the next county. This always baffled me as a child. It took me a long time to realize it was a service for U.S. military personnel, but also, that the post office was a governmental institution, not a business. It existed not to make money. It existed because we needed it to exist.

He rarely sent photos, though I occasionally did, especially as I entered my high school years. I’d splurge for double-prints, and send a few to him.

Years passed. The pile of letters from my father grew larger. I sorted them into neat boxes, arranged by date. I understood that he would not change. He would not be warmer. He would not kiss me or hug me. He would not sign his missives “Love, Dad.” But there was an immutable consistency in his letters. They arrived like clockwork, describing the weather in Munich in 1989, in 1995, in 2002. He sent my mother child support, sent me checks to cover tuition. He was as reliable as the mail.

Sometimes, my father would send me stamps, and I would marvel at the tiny little images from far off places. It was strangely recursive, self-referential, stamps inside a letter. I wasn’t even sure if I liked collecting them; they were so brittle, best left alone. Now, four years after his death, I have a box of them. I can’t look at them without breaking down.

I could not go to my father’s funeral. It was the week of Christmas in rural Bavaria. My stepmother gave us five days notice. By then he had already been cremated. I didn’t have the chance to say goodbye, because that sort of ceremony is reserved for people who do not live on separate continents from their fathers. Those are the sorts of things that you cannot say in letters.

A return trip ticket with less than a weeks notice would cost me ten thousand dollars. I asked my stepmother if it was possible to move the funeral. She doesn’t speak English, so her daughter yelled at me on her behalf via Facebook Messenger. The date would not be moved.

By the time I was able to make it out to Germany, after the holidays, my stepmother had cleaned out my father’s possessions. His workshop was empty, his model planes were gone. She gave me a box of old photos. I left cradling them to my chest. None of the pictures I’d sent him over the years were inside. I don’t know what happened to the letters I wrote him.

This is the part where, as a good essayist, I tell you that it is okay. That I have every letter that my father ever wrote me. That I look at them and trace our relationship back to before I can remember.

Instead I will tell you the truth: that I tried retrieving those letters from my mother’s house, but she told me that she had moved them and didn’t know where they were. Two weeks later, a kitchen fire tore through my mother’s home. No one was hurt, but my letters were gone. My father was again reduced to ashes. 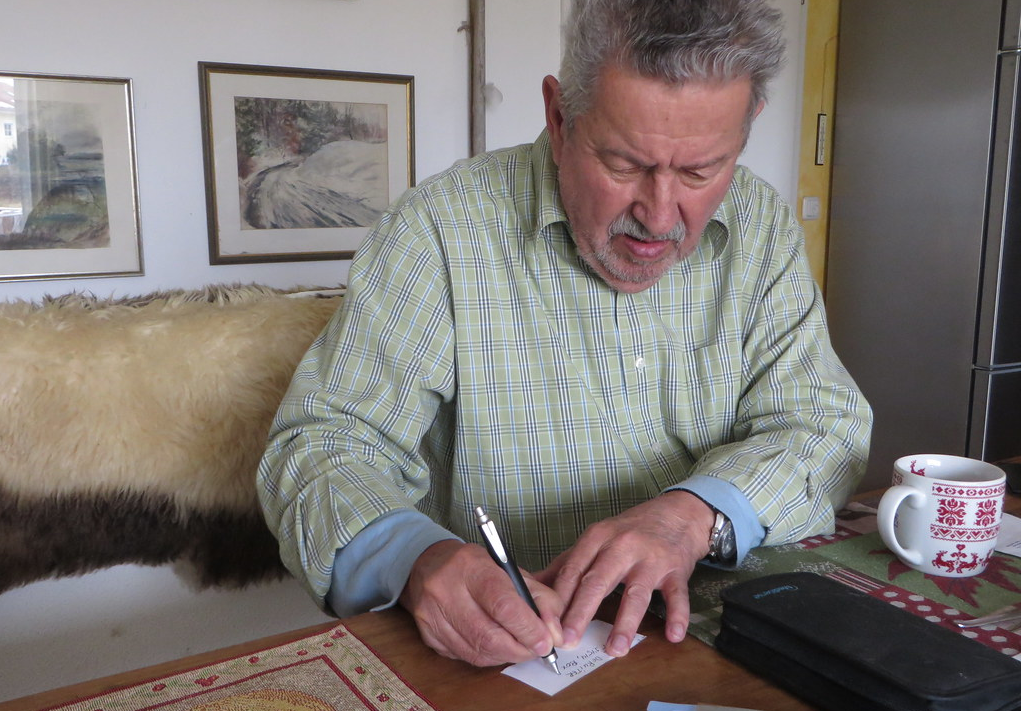 Losing someone, especially someone you could never quite get a grasp on in the first place, is a strange thing. You find yourself crying at the oddest moments, over the strangest things. I hold on to a scrap of paper with my father’s handwriting on it. I cradle a toy car, pilfered from his house, on days when I need to feel something concrete. Not something warm or affectionate, because that is not who he was, but something meticulous and precise, a tiny little metal Mercedes that feels heavy in my hand.

When I told my father I loved him, he would always respond “Fine,” his annoyance stretching out the syllables.

I still send letters when I can. I write thank you notes on occasion. I mail bills that could just as easily have been paid online, because I like placing the stamp in the corner of the envelope. I like doing things that remind me of my father.

I didn’t think I’d have to work so hard to remember him. I had so much documentation of our relationship, tucked into envelope after envelope. I try to remember the loops of his handwriting, how he wrote his name. I wonder what the weather is like in Munich. I think of the Post Office, and I find myself crying, because it is one more thing that I didn’t think I would lose.