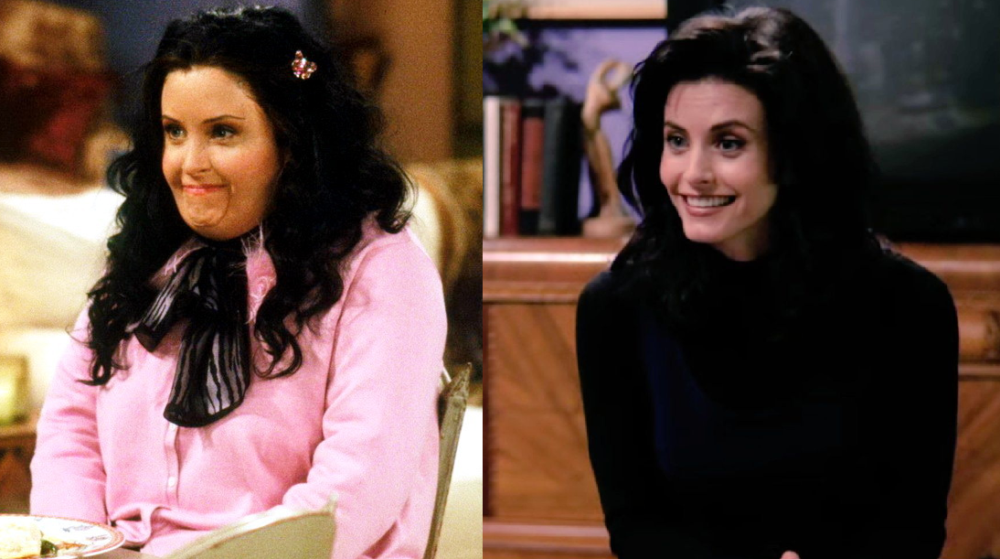 I graduated high school in 1998, either (depending on which arbitrary marker you choose) the last of Gen-Xers or the first of the Millennials. Like so many of us who came of age in the 90s, Friends was a delightful, aspirational glimpse of the future. (I had no perspective to realize that my friends of color weren’t represented. A TV show featuring six friends in one of the most diverse cities in America, and not a hint of melanin among them. But hey, Joey just said something funny and Ross is stressed out! Pass the Jamocha Almond Fudge ice cream, because I am 18 and impervious to calories and my own privilege.) One day, I was going to live in New York and drink coffee constantly and have a huge apartment.

I’m now nearly 40, and none of those things came to fruition (not even the coffee), but I still quote Friends more often than I would like to admit. I know that the TV guide is addressed to Miss Chanandler Bong. I know all the words to “Smelly Cat.” (And I’m not alone – 25 years after its premiere, Friends is still the most watched show on Netflix.)

Ask which character I am, and the answer is swift. Despite having had nearly every iteration of the Rachel haircut one could imagine (the chunky layered cut, the sweeping mane with the face framing wisps, even the shocking sleek bob that followed), I was and am a Monica. Neurotic, loyal, responsible, fastidiously cleaning everything. Oh, and I make a good chocolate chip cookie.

Monica Geller was never marketed as “the sexy one” – that role went to Jennifer Aniston’s Rachel. Though Courtney Cox was and has always been beautiful, Monica was too set in her ways, too Type-A, too determined and ambitious and too demanding of a partner to be the desirable one. Where Phoebe and Rachel’s romantic relationships were often brought down by their own insecurities or incompatibility, Monica just couldn’t find a guy who would commit to her. Pete was too childish, Richard was too flaky. Or maybe she was just too much.

The fat suit first appeared in the second season – revealing that Monica in her younger years was pudgy. She was dubbed Fat Monica, even though the suit was a lightly padded thing, such that if we take it out of the realm of 90s Hollywood bodies, it is exceedingly average (my hips and thighs have always been closer to Fat Monica’s than Monica’s). To describe her as “Fat Monica” feels sort of absurd, until you compare it to the silhouette of the skinny-but-not-quite-to-the-point-of-intervention-skinny Cox. In one episode, the gang is watching an old home movie in which Fat Monica stands, eating a sandwich in a high-collar, late-80s prairie style prom dress, waiting for her date. She’s delightfully unselfconscious. She seems happy.

But the audience laughs, because a fat girl eating a sandwich is somehow funny.

Joey, who is only familiar with the current iteration of Monica, all lean-muscle and sharp cheekbones, is shocked, pointing to the TV screen and shouting, “SOME GIRL ATE MONICA.”

In another episode Fat Monica yells that no one had better have sat on her KitKat, and the audience cracks up, because now a character’s well-known neuroses have been channeled into a fat woman possessive about food.

Monica’s weight was a punchline – made possible not only because the fatness was part of her past, but because it was a fiction for even the actress who played her. Cox has been skinny ever since she entered the public eye. Her first touch of fame was being pulled on stage by Springsteen in his Dancing in the Dark video, where’s she dressed just like him, short hair and tight jeans and sleeveless shirt. She has the unattainable beauty of an 80s ingenue: twinkly eyed, slightly boyish, completely off-tempo.

In season four, when Rachel’s old high school boyfriend calls to ask Monica out, Rachel is slightly bothered by the idea but softens when Monica tells her how much it means to her.

“The fat girl inside of me really wants to go,” Monica says. “I owe her this. I never let her eat.”

The audience laughs, but it is a singularly heartbreaking sentiment. Monica is a chef, constantly surrounded by food she will never touch. It’s a modern-day Greek tragedy. The idea is never said explicitly, but it is there: that no matter how kind and loyal and giving you are you are, fatness will make you an outsider, fatness will make you weird and flawed. And even if you lose the weight, you can’t get rid of that. It’s not even really about being thin – it never is. It’s just about telling women that their bodies are wrong, and need to be controlled. In endeavoring to fit in to those size two jeans and to society at large, Monica suppressed a part of herself that was never problematic to begin with. And she genuinely seemed less joyous as a result.

She’s dating a kind but boring doctor, and at the age of 30, unwillingly still a virgin. Because in the world of Friends, fat women might be lovable but apparently they can’t actually be fuckable.

She is still fundamentally the same person – still fastidious, still passionate about things that other people aren’t invested in (though in Fat Monica’s case, the hill she is willing to die on is that low-fat mayonnaise is not real mayonnaise). And by the end of the two-parter, she ends up in bed with Chandler, who is clearly smitten with her in both realities. (Truthfully, I always loved their storyline – it  carries with it a sort of “meant to be” romantic fatalism. Schmaltzy? Yes. But I’ve always been partial to schmaltz.)

The real problem with these episodes isn’t Fat Monica – she is, in so many ways, wonderful. She knows who she is. She knows she’s fat and knows that she deserves love. She never body-shames or slut-shames herself for a fleeting second.

The real problem is how Fat Monica is treated. It’s that for some reason, we were told that her joy, and self-confidence, that her mere existence was something to be laughed at. That the idea of a fat woman happy with herself and wanting to fuck people was somehow ridiculous enough to be funny.

And perhaps there is the saddest thing about Fat Monica – that in the world of Friends, she was simply a part of the past, never more than a joke.

Imagine if Fat Monica had simply been Monica – not Courtney Cox in a fat suit, but an actress with – to paraphrase episode 2 of Shrill – a fat ass and big titties, someone who got to make the rules. Someone whose fatness wasn’t reduced to a punchline. Imagine if that girl had been let out. Imagine if she got to dance and fuck and play in the damn fountain and drink coffee at Central Perk.

Imagine if she got to eat, and no one, not a fucking soul, laughed at her. It would have been a gorgeous thing.