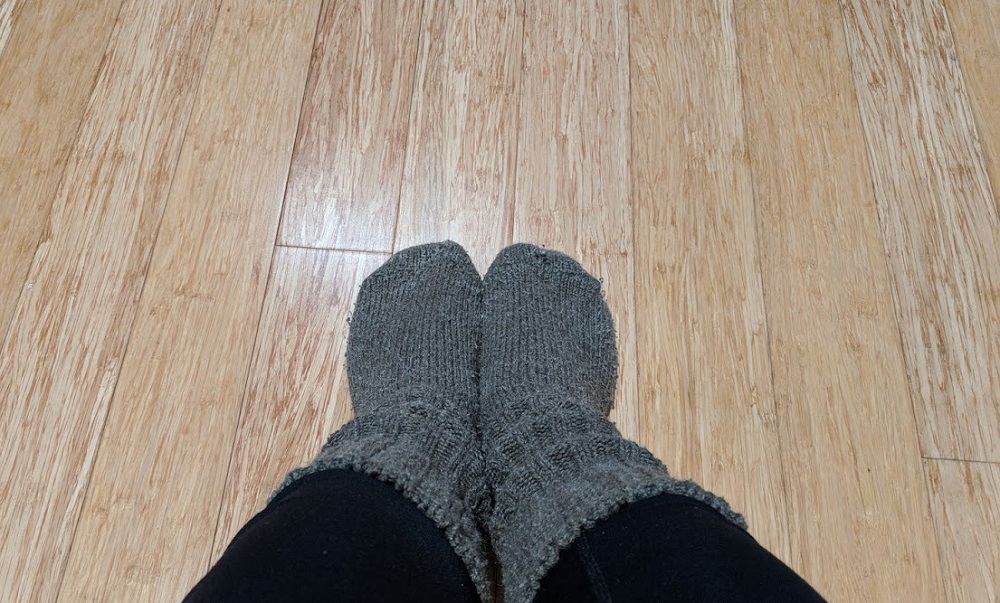 I had not worn the socks in years when I fished them out of the back of the drawer. They had survived the journey to college and six subsequent moves. They were one of the few relics of my past that had not been destroyed in the recent fire that consumed my mother’s home.

They are now so threadbare that I can see the entire pink pad of my heel, cracked with dry fissures, when I put them on. I gasp as I walk across the cold floor of our kitchen. Socks are simple things; they are designed to meet a basic need. These ones no longer do.

We are presently in the midst of a massive national decluttering. Thrift stores across the country have reported a huge surge in donations, which many attribute directly to the release of Netflix’s new show Tidying Up with Marie Kondo. Kondo, the titular host, has become an international star and organizational pedagogue. She exudes peace and stability, which it feels safe to assume comes from the immaculate order of her home. Her entire ethos is that decluttering will bring happiness – that the source of our anxiety and stress and troubles is that we simply have too much stuff. There is a problem with this hypothesis that is never discussed, because it is simply easier to clean out our closets: clutter may indeed be correlated with unhappiness, but that doesn’t mean it causes unhappiness. It may simply be a symptom.

According to Kondo, the litmus test for what we should keep and what we should throw out is an easy one: if something does not spark joy, get rid of it.

And perhaps that works for things that have been with us for six months, or twelve months, or even 18.

That is precisely how long ago the socks were given to me, by the first boy I ever loved, a boy who never really loved me back. He would break my heart and I would carefully put a few pieces of it back together before letting him do it all over again. He would dump me for another girl but show up on my doorstep in the middle of the night, eyes bright, and tell me that he loved me.

I remember distinctly what he said when he gave the socks to me, shortly after we started dating in the fall of 1995. They were thick wool and green-grey in color. 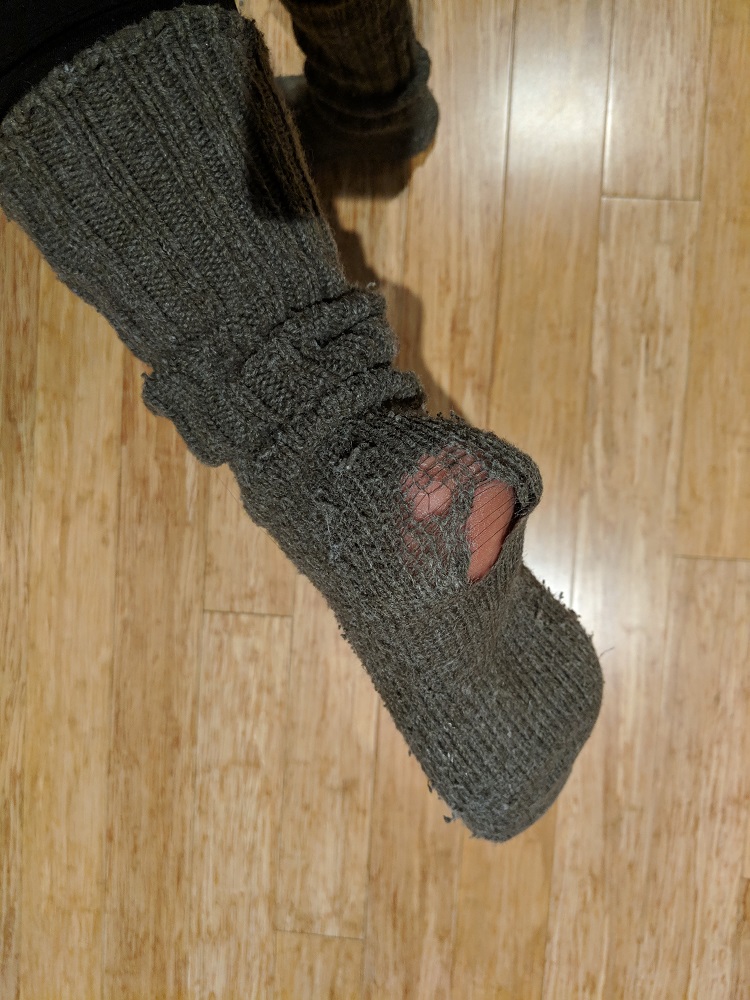 “I’m giving you these for three reasons,” he told me. The first, he explained, was pragmatic: “You are always cold.” When I first met him, we’d just moved back to Seattle from Florida, and I was, at any given time, freezing. Weighing a scant 110 pounds, there was scarcely enough meat on my bones to keep me warm through the Pacific northwest winters.

The second reason was symbolic: he didn’t want me to have cold feet about us. He’d known I’d been unsure about dating him. Even then, with absolutely no experience to draw from, I knew to be wary.

And the last reason, he explained, was poetic: the socks matched the color of my eyes. Maybe it was dumb luck on his part, but I always marveled at how close he was able to get.

I wore them to school and around the house, would lounge in them on weekends, would carefully hang them to dry so they wouldn’t lose their shape. I am fairly sure I wore them as I sobbed when he broke my heart the first time, and the second time, and the fifth time.

“I left you because you were immature, sarcastic, and fickle,” he told me once. He had a talent for carefully carving away my self-esteem so that when he would inevitably show up again, I’d take him back, convinced no one else would want me.

Years later, I would repeated his criticisms of me to my husband, who chuckled quietly to himself upon hearing them.

“Those are your best qualities,” he said, kissing me on top of my head.

I have heard that you never forget your first love, but my problem was that I never could stop forgetting him. The machinations of what he did, the scheming, the lies – whenever he stepped back into my life, all memories of that vanished. I was simply happy that he’d returned. The one thing I couldn’t hold onto was the memory of the terrible things he did to me.

And inevitably, he would do them all over again. Through every cycle I’d destroy whatever mementos of him I’d gathered – letters, photos, gifts. It was an easy thing to do – they sparked only resentment and heartache. He was left with a clean palette. It’s easy to woo someone with selective amnesia. They only remember your good qualities.

The socks, somehow, survived all of this. They became one of the few ties to our collective past, a reminder of everything terrible thing that he’d done. I hoped they would protect me when my faulty memory wouldn’t, that they’d stoke enough rage and hurt that I could finally purge him from my life.

The concept of moving on is always impossible in the moment, but it happens. I would eventually give other boys a chance at breaking my heart, and a few bravely took up the mantle. I cried over new faces and new names as he faded into the recesses of my memory. I finally forgot about him.

The last time I saw the boy who gave me the socks was nearly two years ago, when he showed up at a reading for my memoir in Portland, a two-hour drive from his home. He positioned himself as last in line to have his book signed.

“Well, this is awkward,” he said when he reached my table.

No, it wasn’t, I told him. And I meant it. The years dull everything – love, pain, discomfort. He didn’t glimmer like before nor did he fill me with a sense of dread. The feelings, like everything else, had become worn and threadbare.

I had become a writer, just like I’d always hoped. I had traveled the world. I had married a dark-eyed man whom I adored; I learned what it meant to love someone who loved me back.

We made idle chit-chat for a few moments, and I found myself almost wistful about how we can move on from the past. Perhaps he sensed this. I can’t think of another reason for why he – in an abrupt non sequitur – began discussing sex acts that I had supposedly bestowed on partners I had after him.

I stared blankly, my mouth falling slack, his copy of my book still in my hands. He’d driven two hours to my reading to slut-shame me. In the intervening years, I’d managed to forget who he was. He was all too eager to remind me.

I have a drawer overflowing with socks. Most serve a utilitarian purpose. A few genuinely do delight me (Kondo would be proud). And tucked in the back are the wool socks I’ve kept for 23 years. There are things that we keep not because they bring us happiness but because they serve as some sort of record of the bullshit we’ve been through. They are the merit badges of our lives. 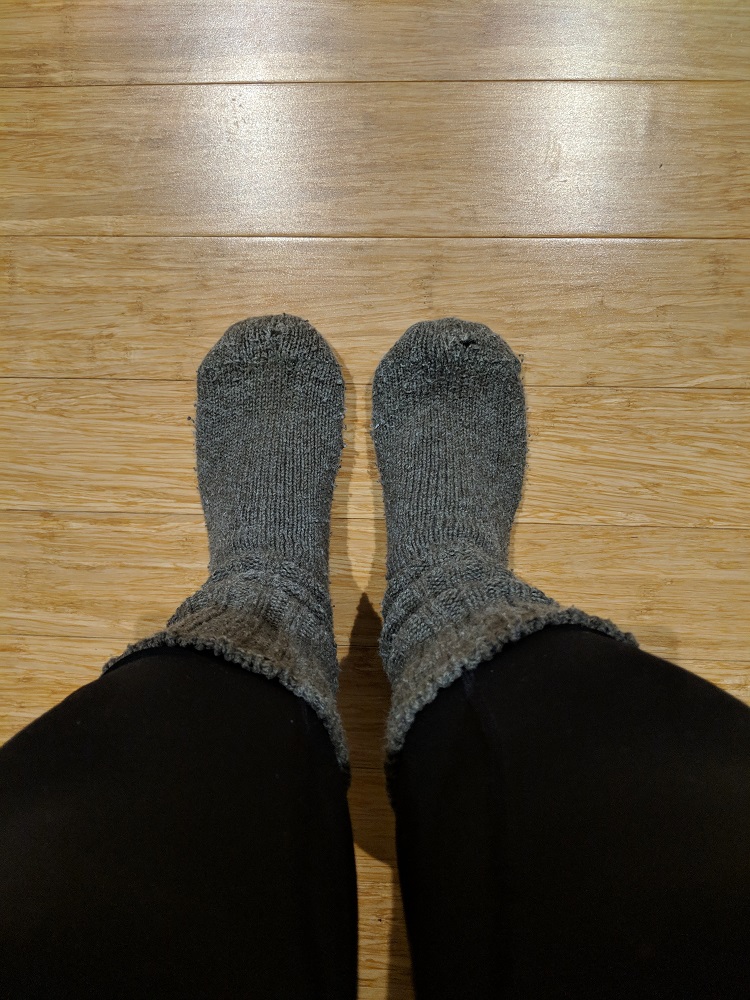 The socks do not spark joy; instead they remind me to not take the joy in my life for granted. I once loved a terrible human being. It’s a mistake I won’t repeat.

After two and a half decades in the chilly Pacific Northwest, and with slightly more weight on my frame, I am no longer consistently cold, though my feet still have the warmth of a cadaver. My husband recoils from their iciness in our bed, and then, sighing heavily, places them between his slender calves to warm them.

“Your toes are popsicles,” he whispers drowsily to me. I laugh.