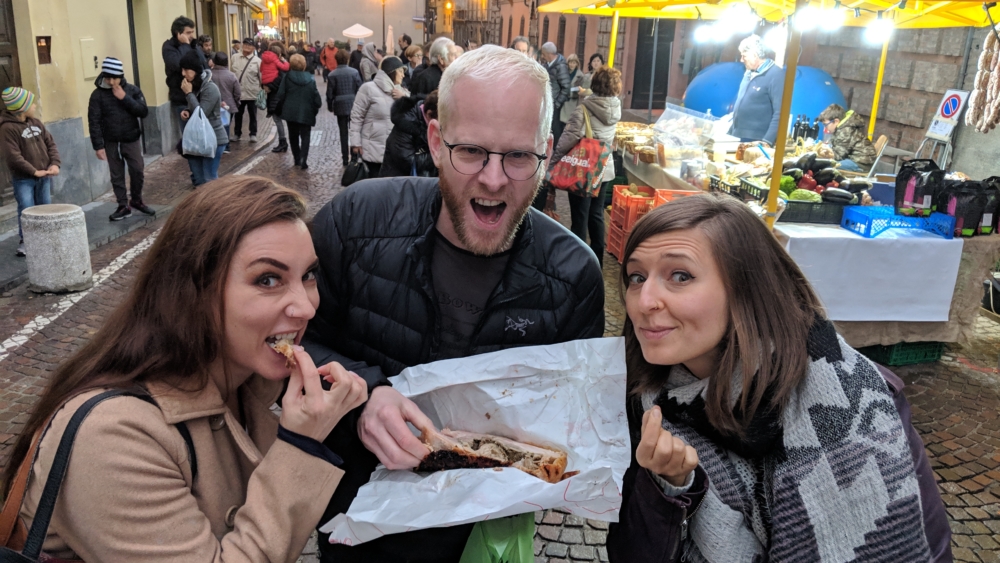 The emergency porchetta was my favorite part of the trip.

That is a strange thing to say for a lot of reasons. For one, I don’t know if the concept of emergency porchetta is widely known. A Google search for the term reveals four results, the most salient of which is someone looking for cooking advice. “Emergency porchetta question” they write. But the urgency seems to come from the nature of the query itself, and not the hunk of roast pork it pertains to.

For another, we had a great trip. Despite the endless rain and the grey skies and the hotel mishaps and the projectile vomiting on the side of the road in Genoa (my apologies to all who witnessed it), we had a wonderful week in the north of Italy. So many things happened that reminded me of why I love to travel.

But damn it, that porchetta was everything.

It could have ended differently – all travel stories can. That’s what travel is supposed to do – to open up a door to a thousand possibilities. And when I look back on the scene – the four of us wandering through a market in Canelli, the air chilly and damp, the sky that deep blue-grey that it always is in the early evenings of late fall, when the sun has never bothered coming out – it could have gone terribly awry. It was crowded and we were tired and Oli was hungry – that urgent hunger that comes on quick and catches you off guard.

And damn it, Oli is a picky eater. I mean picky. We passed bar after bar, but they only served pasta (which he doesn’t eat because he’s an alien), or no food at all, or weren’t open yet. And then we came across a stall where a man was selling all manner of salumi. A vegeterian nightmare of every sort of cured meat you could imagine. And there, at the center, a roast of pork, a giant thing the size of a not-insubstantial child.

“They have porchetta.” I offered. It seemed like a long shot.

“Yup,” Oli said, with zero hesitation. “That works.” Because Oli is picky, except when he isn’t at all.

I told the man behind the table that we wanted some, and he indicated with his knife the thickness of a cut. 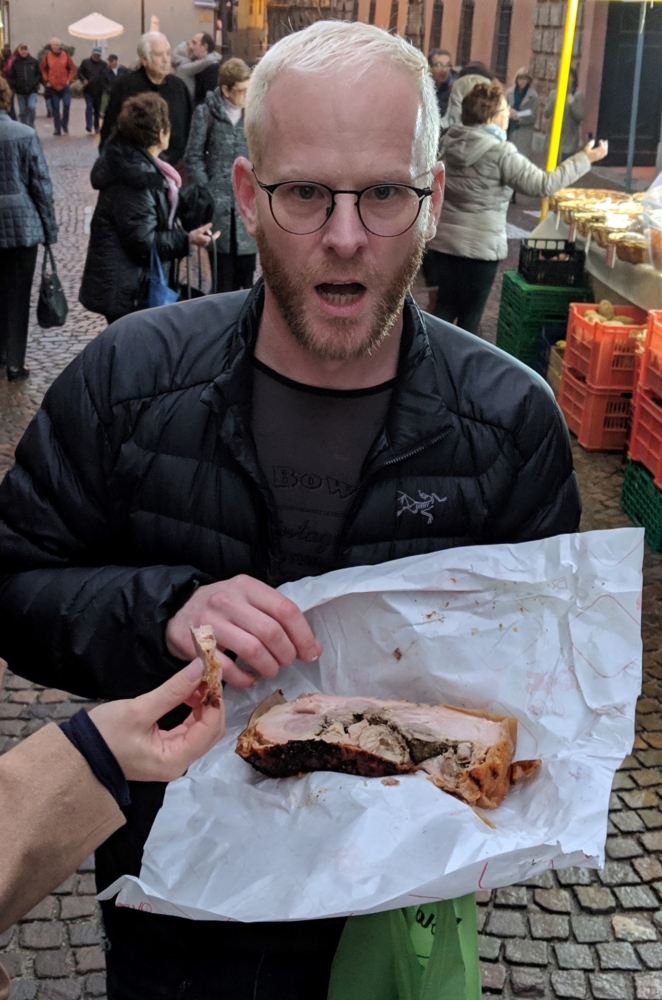 The face of man who has just purchased a pound of roast pork.

Oli stood in the middle of the crowd, and pulled off a chunk.

And we all stood with him, picking at it with our fingers in the twilight, dubbing it “emergency porchetta.” We returned to the phrase again and again – the accidental purchasing of a pound of roasted pork on a chilly night. The sort of thing that turns your evening from potentially disastrous to absurdly memorable. That sort of unpredictable, unrepeatable moment that will forever be grander than the sum of its parts.