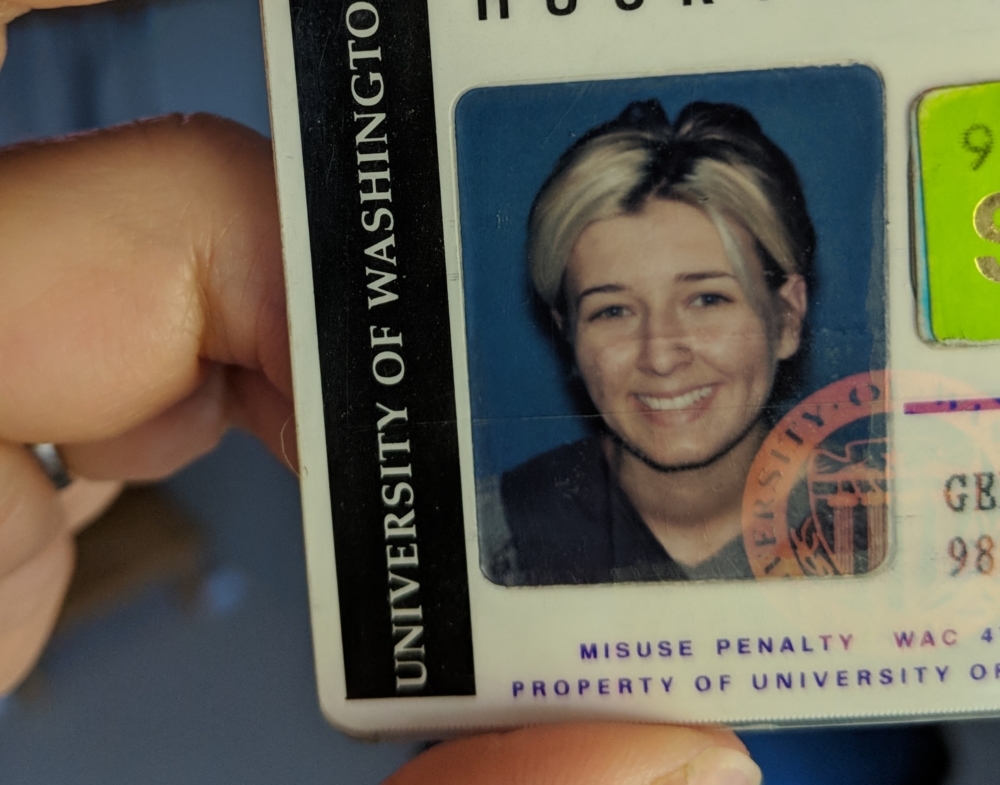 (Above: my student ID in 1999. Let’s just keep our comments to ourselves.)

There’s this pattern I keep seeing. It goes like this:

Man’s PR team then releases numerous letters from women saying that he’s not a sexual harasser because, you know, he didn’t harass them.

It’s happened most recently with Judge Brett Kavanaugh, Trump’s Supreme Court nominee, after Dr. Christine Blasey Ford accused him of sexually assaulting her in the early 80s. But it’s happened with Al Franken, and Tom Brokaw and countless others, resulting in a mental puzzle that becomes increasing difficult to parse: a woman who accuses a man of sexual assault is immediately under suspect – but one who defends that same man often has her word heralded as gospel.

Whenever these letters come out, I cringe. I become enraged. I want to scream about how it’s very easy for people to be kind and awesome to one person and awful to someone else. How a lot of the time, that sort of cognitive dissonance is actually what enables people to do horrible things.

Look, I’m obviously not a bad person. I have lots of women who support me! I can’t be a misogynist/rapist/abuser because misogynists/rapists/abusers do not have female friends who come to their defense.

And a part of me wants to scream at the women who write letters defending men who’ve been accused of hurting women. I want to yell at them, and ask them what the hell they’re thinking. But part of me already knows. Because when I was 19, I wrote one of those letters.

My sophomore year of college, I had a summer job at a youth drug rehabilitation intake center. I was a house manager, which meant that I mostly kept an eye on the residents (they needed to be supervised at all times, unless they were in their rooms), who were scarcely younger than me. I was new, and young, and low on the whole pecking order – I deferred to the therapists (one of whom happened to be my mom, though our hours rarely overlapped), to the clinical supervisors, to the other house managers.

I lied and told the residents that I was 20, since I very nearly was, and I thought it might lend me a little more of the authority which I so sorely needed. Most everyone – coworkers and residents alike – saw me as one of the kids, and it was problematic to say the least. One patient developed what a coworker described as a “weird, hostile crush” on me, and it became impossible for me to work the halls alone. When I told his counselor about it, he said, “You kids are going to have your disagreements” and then made us shake hands. I still cringe at the memory.

I broke up fights, I was physically intimidated, I had horrible things said to me by the residents – and I accepted it all as part of the job because, well, they were kids. On one occasion, I retreated into our communal office because I was almost on the verge of tears and I’d been told that if they saw you cry, it was all over.

One day one of my fellow house managers – Kelly (yes, that is a fake name), a woman who had helped train me and who I looked to whenever I had questions, came to me with a request. One of the former female residents, a teenage girl, had made a sexual harassment complaint against a male therapist. Kelly wanted me to write a letter defending him and admonishing the resident.

“You know how she was,” Kelly said, referring to the resident. She explained that the patient was just saying these things to avoid further consequences – and possibly time in juvenile hall.

“I don’t,” I said. “I’ve never actually met her.” She’d left the facility long before I started working there.

Kelly explained to me that this was sort of thing the resident did – she was a liar. And then she told me that if I couldn’t write a letter condemning her, I needed to write one in support of the therapist.

I stammered, trying to get out of it. This all felt uncomfortable in a way I couldn’t quite pinpoint. Kelly ignored me, placed a pad of paper in front of me, and started dictating things I could say. She told me she’d be back later to pick up my letter.

I stared at the paper, unsure exactly what had happened. Kelly and I worked together almost daily and she had far more seniority than me. I wasn’t sure how I was supposed to say no. I decided that I would simply write about the therapist, who had been pretty nice to me. I mean, there was nothing wrong with that, right? I was just writing about him, and keeping the peace, and making Kelly – with whom I worked very closely – happy. This logic somehow worked for me, and I started writing.

When Kelly came back, I handed her the letter, and she read it over and told me how great it was, and thanked me.

The next day, Kelly came back with a typed version of my letter, and told me to sign it. I figured my obligations to her were over, so this caught me off guard, and something about the letter being typed – and more than just a note I’d jotted down – panicked me. It would have been my last chance to object, and I tried to, feebly, but when Kelly ignored my protestations and simply held out a pen to me, I signed the letter. I winced as I glanced up and saw a typo, and wondered what other changes had been made. But Kelly was near frantic to get my letter out, and snatched it from me quickly. That, nearly 20 years later, is what I remember: the urgency with which everything needed to be done.

My mother was upset when she found out, but she was clear that blame rested on me and no one else.

“Why on earth would you would do that?” she asked me.

“I thought I had to,” I said quietly. I told her that the statement of a 19-year-old wouldn’t make a difference, and my mother warned me about underestimating my own role in the situation.

But I genuinely didn’t think I’d had a choice.

We obviously shouldn’t blindly believe any allegation without investigating it – but we should know that a group of women writing letters to admonish a man doesn’t prove his innocence, either. They’re irrelevant, even if those letters are written under the best of circumstances. And a lot of times, they aren’t written under the best of circumstances.

I don’t mean to broadly excuse every woman who writes a treatise defending a male harasser. It’s done for myriad of reasons. Some women simply can’t reconcile the cognitive dissonance between someone being kind to them and being awful to someone else. Some women need to embrace some sort of just-world phenomenon in order to make themselves feel safe, and that means turning a blind eye to the suffering of other women and pretending that everything is just fine. Some women just want to help out a friend who’s been accused of something awful. Some women are assholes.

And I don’t want to remove agency or accountability from women in positions of privilege who do that willingly. But we also need to acknowledge that a culture that allows women to be harassed or assaulted can also easily allow women to be intimidated and coerced (yes, even by other women). After Tom Brokaw was accused of inappropriate behavior, a large number of women staffers have noted that they felt pressured to sign the letter defending him. Many felt that if they didn’t, there would be repercussions down the line.

When someone in a position of authority tells you to do something, a lot of times you just do as you’re told. Even if ends up haunting you for decades. People who resist are often the ones who have the privilege of resisting. Or maybe they just have an amazing strength of character and empowerment – something that I certainly did not have when I was a teenager.

I’m not 19 anymore. I’m self-employed, and have been for a decade. I work in my PJs, I take breaks to do laundry, free of any sort of office dynamic that makes me feel forced to vouch for the character of someone who may or may not deserve it. Every time I read a letter from a woman defending a colleague who’s been accused of harassment, I remember that her experience can be entirely true and it still doesn’t change anything. And then I wonder what role pressure and fear might have played in writing that letter. Because for me, at 19, it was a big one.

Feminism, Nothing to Do With Travel, Personal Essay