Posted in: "Lifestyle", Nothing to Do With Travel, Personal Essay

This should not sound like a profound thing, but for someone for whom the social media platform was essentially an extension of my psyche, the act has felt monumental. I have said, again and again (usually when talking of internet abuse and responding to people who tell me that if I don’t like I “can just leave”) that for me, and many writers like me, social media, and Twitter, its enfant terrible, are not optional. If you are trying to sell a book, the first thing a publisher wants to know is “What is your social media following?” Because more important than the book you are writing is the audience of people you can market it to. This is not cynicism and I say it without judgement. It’s simply how it works. If you want to write, you need an audience. And unless you are a literary luminary – like Ta-Nehisi Coates or Lindy West, both of whom have quit the platform – you need to be on Twitter.

The month off came in the wake of an exhausting summer – the sort of summer designed to break your heart in a thousand ways. I watched the impervious fall into grief, saw women made of iron cry so much I wondered if they’d rust, witnessed men I thought were carved from stone start to crack. The circumstances of the last few months have left the skies filled with smoke, and people I love filled with sadness, and in all of this there was no room for anything else, certainly not for the hoards of faceless strangers lining up to call me a cunt on a micro-blogging platform.

I’d promised this hiatus a while ago – when I was working on my presentation for World Domination Summit, and wading further into the cesspool of my hateful replies, I vowed that I would take a break when it was all over, throw my phone into the proverbial ocean and just breathe for a while. I spent the remainder of that month still fused to my phone, still clicking onto a new window to open Twitter every time I sat down at my computer, instead of blogging or working on that new book proposal I owed – and still owe – my agent.

Any time my mind started to wander, I’d click over to my feed (a perfect word to describe the endless stream of information that poured from the social media sites I visited. I felt like a chicken, pecking repeatedly at things that offered sustenance but no joy). Sometimes I’d diversify – I’d manage to stop checking Twitter for a few minutes only to hop over to Instagram or Facebook for a while, before returning to work. No, that’s a lie. I didn’t return to work. I went right back to Twitter. I don’t know when things because untenable for me, when my attention span became so terrible that only a few minutes (if that) could pass before my mind would wander to a place where I could find easily digestible bites of information delivered in chunks of 240 characters – or less – at a time. I’d stopped reading articles and instead only consumed headlines, I’d stopped being able to follow conversations with friends. My body would be having dinner somewhere but my brain would still be scrolling through my feed, wondering when I could get back to it.

And for what? For the occasional thrill of knowing that a tweet had gotten a few hundred (or perhaps even – gasp – thousand) retweets? For the constant stream of abuse and name-calling that accompanied any such attention? Because praise and success don’t exist in the online world – at least not for a woman – without hostility and abuse and threats. And the model of not knowing what tweets would succeed and which would fail followed the same model of unpredictable rewards that I knew kept gamblers addicted. You never knew when you were going to strike it big, so you kept going in hopes of getting that little rush and maybe having an editor reach out to you offering you a column where you could string a whole bunch of pithy thoughts together and get paid for it.

August 1st became day 1, and I told no one, convinced that I would fail. The first few days I found myself checking Twitter – not as a willful digression but completely out of muscle memory.

“What the hell am I doing?” I’d say when I caught myself, immediately closing the window.

Three days in, I found myself reading Rand’s Twitter feed over his shoulder, so starved for it that it didn’t matter that I was reading about tech and marketing news. Six days in, I realize that I had no idea where to get news from. Do I just … go to the news sites? Can you do that? That first week it felt like the power had just gone out and I was wandering around in the dark, trying to figure out what the hell to do next. I found myself drifting over to Facebook and realized that I could easily swap one platform for another, so I decided that I wouldn’t check any social media for the entire month (though I occasionally scrolled through Instagram while waiting at the doctor’s office).

I had so much time.

(Don’t worry, I didn’t accomplish anything with that time.)

Ten days in, I met Dana Schwartz, patron saint of saying clever things on the internet, and it felt like a cruel joke that I couldn’t tweet about it. But around that time the ties that bound also started to loosen. I stopped walking with my head down into my phone. I was able to follow conversations better. I started responding to email in a timely manner.

I finally told Rand about the project almost two weeks in, worried that his excessive encouragement might actually have the opposite effect. Perhaps he sensed this too, because he simply smiled and said, “I think that’s a great idea,” but his eyes betrayed him. They were bright and shiny and so, so relieved. A few days later he told me that friends had started emailing him, concerned about me.

“Geraldine hasn’t tweeted in a while,” they wrote, “Is everything okay?”

Eventually people started reaching out to me as well, inquiring about my well-being. 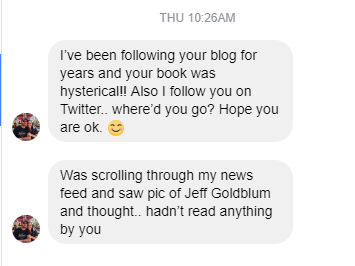 One friend told me that he’d seen me in the middle of all of this and so he knew that I was okay – otherwise he’d have been concerned.

Some postulated that the abusers had gotten to me, and so my hiatus was understandable, and I was left wondering if that was the case. Yes, there were days that I didn’t want to deal with Twitter’s endless stream of abuse and vitriol … but the scope of what I dealt with didn’t seem that big a deal in relation to what other women I knew put up with to have their voices heard. I hadn’t been abused off of Twitter … had I been annoyed off of it?

I paid my bills, I cleaned my desk, I did the sewing and the laundry, I visited news sites (that part’s still weird to me), I worked out, I made eye contact and smiled at people when I encountered them in elevators and on the street. I kept my head up. After nearly four weeks, my attention span became something it hadn’t been in ages, something iron and concrete and unlike the fluttering moth that it had been in recent years. And that was when I started doing something I hadn’t done in ages: I started writing again.

I missed a lot, too. I didn’t realize that John McCain had died until my beloved told me, because I hadn’t read the news that day. I missed the announcement of the birth of several of my friends’ babies. I missed notification after notification. My brain felt like a new and limber thing, but I also felt strangely disconnected, and I wondered if the two things were inherently related.

On Saturday, the social media-free month complete, I went back to Twitter with trepidation.

“I’m afraid of going back to exactly where I was,” I told my husband. Back to being unproductive and unable to write and the moth-like-attention-span. He suggested I set a timer and give myself ten minutes on the site. I did so, but made it through only a few days’ worth of my replies, amazed at how the time sped by. 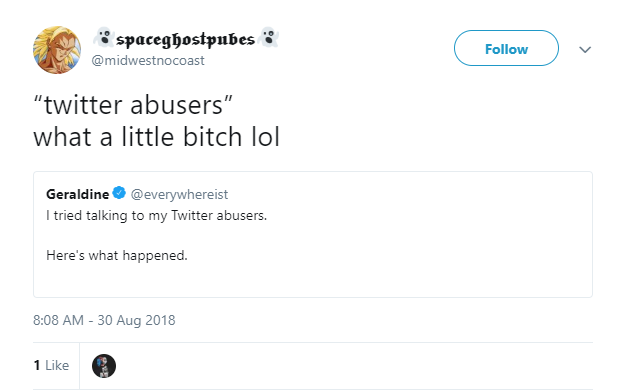 Nice to see that things hadn’t changed while I was away.

After some deliberation, I kept going for another 15 minutes, caught up with all my replies, and sent a few tweets out.

I left the site. But then I felt the tug again, wondering who’d replied, wondering who’d retweeted me. That’s the problem – the nature of social media is a call and response, one that never offers a last word. Today, just 24 hours after my hiatus has ended, I found myself ready to pen a series of tweets about how online abuse is real abuse to someone who told me that I had never experienced the real thing. I stopped. Instead, I wrote it all down in a document that I’ll send to my agent.