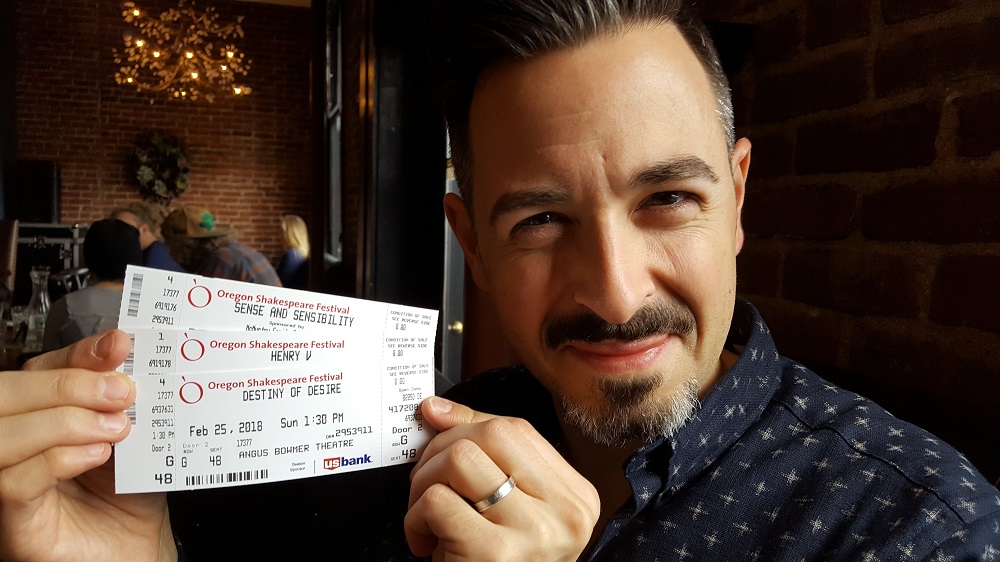 A strange thing happens when you become a theater nerd of the highest order – you develop a relationship not just with the characters within a play, or even the play itself, but – if circumstances allow – with the theater company as a whole. Every season takes on its own personality, and you find yourself wistfully remembering all the shows that made it what it was – the actors, the plays, the characters, the sets, the costumes, even the weather, and the way that the sky looked.

This is how I mark my visits to Ashland – by the shows that weave themselves into that chapter of my life. And so now I cannot think of Medea/MacBeth/Cinderella without thinking of my brain surgery, and I cannot read Hamlet without feeling rain on my face, and Shakespeare will forever be Bill DeMeritt. Don’t @ me.

It is too early to say what this season will mean to me. I know the shows will be stellar – they always are (and if you wish for an objective review, go elsewhere, because this is my favorite place in the world) – but how will they tie into the narrative that I am constantly writing with this twinkly eyed fool who hasn’t seemed to realize that he’s far, far too good for me? 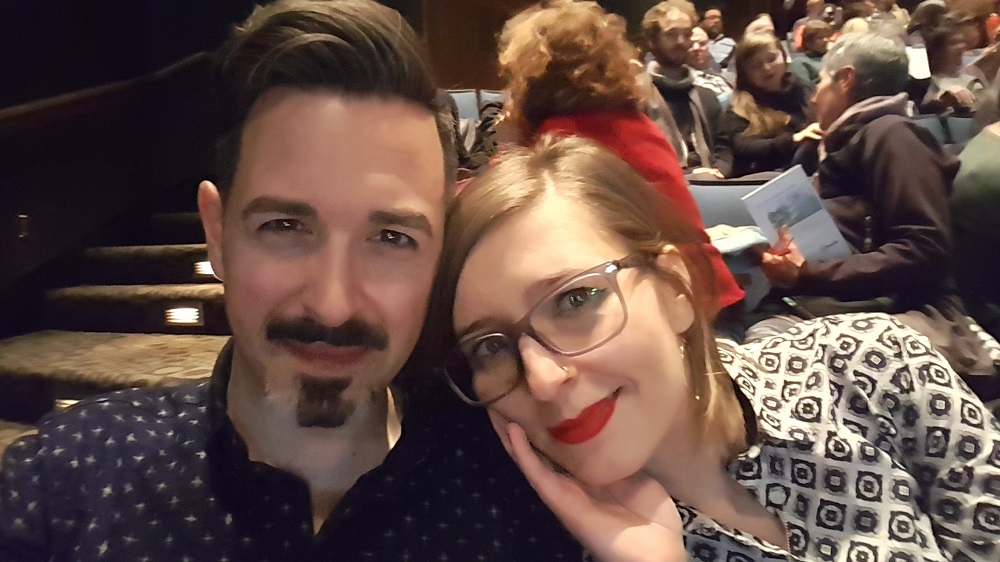 We went down for opening weekend. The air was full of nervous energy and falling snow. Four plays opened the start of season, of which we saw three – Destiny of Desire, Sense and Sensibility, and Henry V (we skipped Othello, since we have tickets for it later in the season, and we long ago learned that four plays in two days doth break my brain.)

I have seen the film version of Sense and Sensibility countless times. I know the story by heart. Because of this, and the fact that we’d just seen another Austen play a few months ago, Rand suggested we skip it.

In response, I politely threatened to burn all his underwear. He was able to read nuance; we went to see Sense.

In between acts I would list an actor’s entire resume for him. This time it was Amy Newman, flitting across the stage as Fanny Dashwood, every line that left her lips a mix of acid and sugar.

“She was in the Odyssey,” I told Rand, “and Merry Wives of Windsor. And Roe.”

The shows do not exist in a vacuum for me anymore. Actors I recognized now carried with them the histories of characters from seasons past. When Nancy Rodriguez and Armando McClain – as Eleanor Dashwood and Edward Ferrars – finally kissed, I cried, because I had not been waiting two hours for it – I had been waiting years. 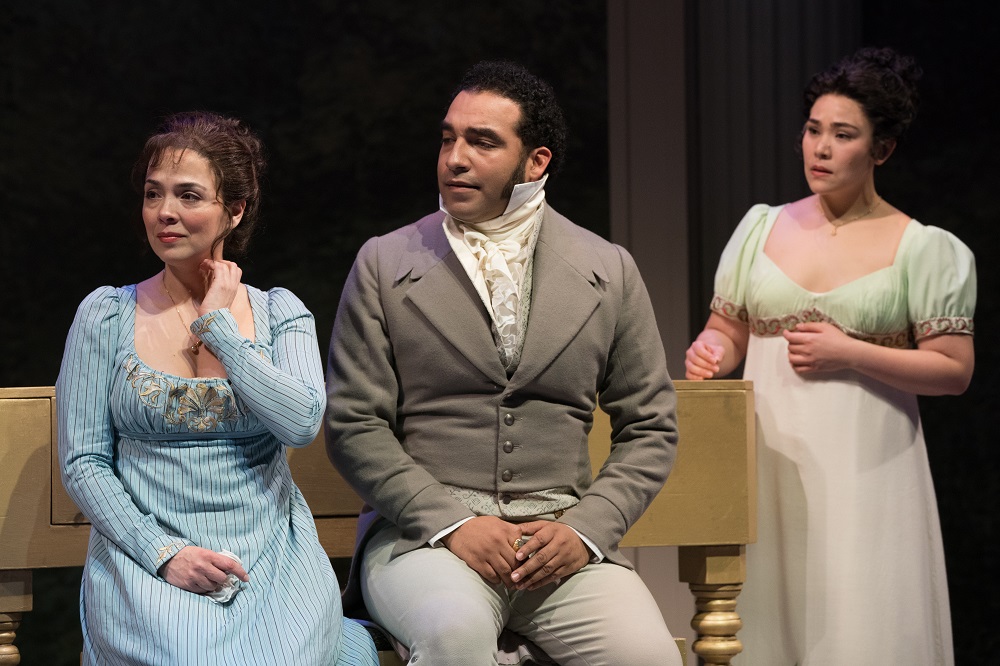 “I find myself … wondering why the fuck things can’t just go right (FOR JUST ONE DAMN SEASON) for Nancy Rodriguez.” – me in 2016

Also, a small complaint: Marianne’s dismissal of Colonel Brandon is a lot more believable when Colonel Brandon isn’t incredibly debonair and has a voice that sounds like you somehow made a souffle out of velvet and sex. 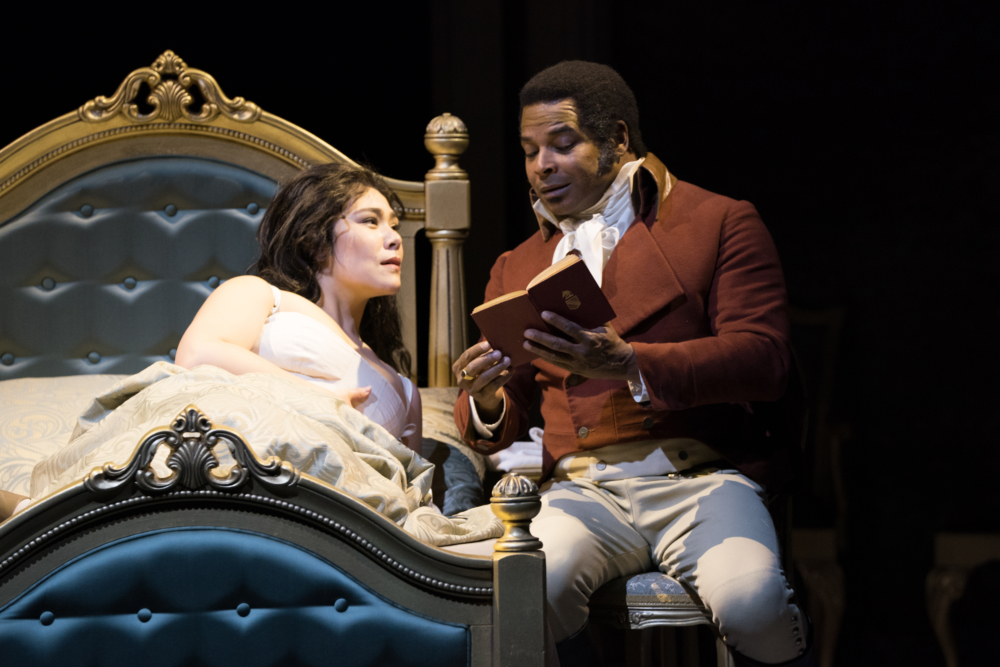 Marianne (Emily Ota) listens to Colonel Brandon (Kevin Kenerly) and my husband had to stop me from screaming “GET IT GIRL.” Photo: Jenny Graham.

I flipped through the program, squealing like a kid discovering a long sought-after trading card whenever I saw an actor had returned to the company after years away at other theaters.

“ARE YOU KIDDING ME? HE WAS THE LEAD IN PIRATES OF PENZANCE.”

“That was seven years ago.”

I saw past the mustache and recognized Eddie Lopez immediately when he walked out onto the stage in this year’s telenovela-inspired Destiny of Desire. The play was delightfully self-aware; the audience and the actors seemed to share a knowing wink about how over the top it all was. And just when I was ready to dismiss it as a ridiculous, farcical comedy, an actor would emerge from offstage and deliver a line about the sociopolitical realities of life as a Latino in the United States.

It is absurd for a nun to reveal a sequined evening gown beneath her habit. It is absurd that every day, a person dies of thirst trying to cross the border between Mexico and the United States. We just don’t usually see that absurdity side-by-side. 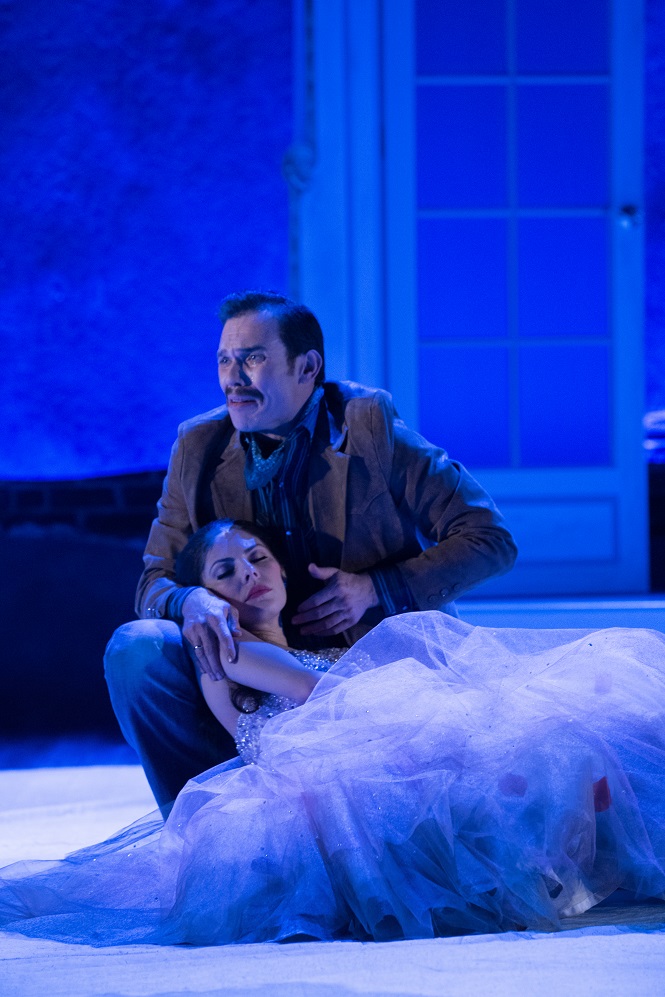 Ernesto (Eddie Lopez) cradles the body of his daughter, Victoria Maria (Ella Saldana North) in what I swear is a comedy. Photo: Jenny Graham. 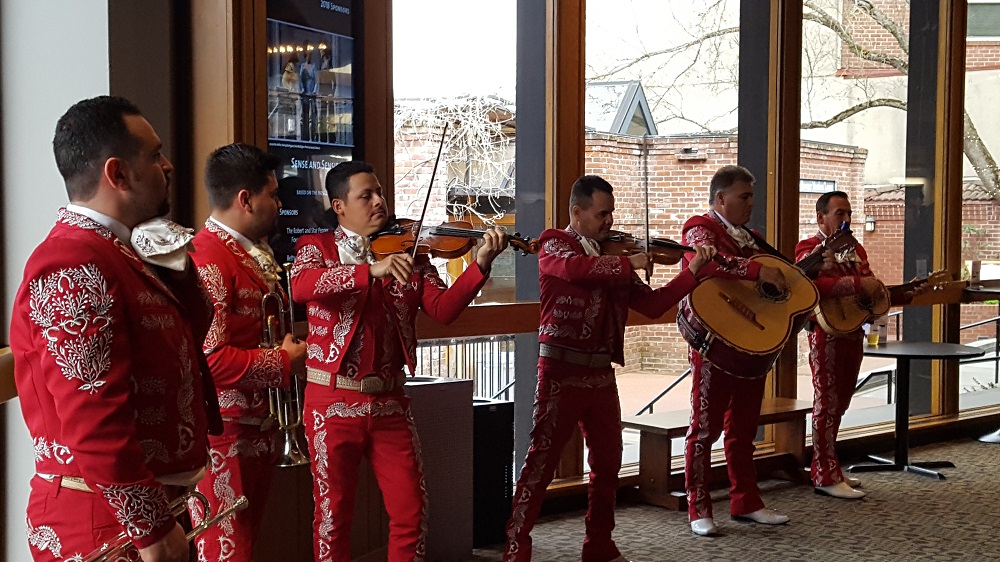 And at the end of the show, a mariachi band played.

Age cannot wither my love for this place, nor custom stale it.

Still – I won’t lie – I walked into Henry V with a dose of trepidation – we’d not seen Henry IV Part 1 or 2, and histories are not generally my or Rand’s favorite. But the OSF was able to breathe life even into the Bard’s old words, and thanks to a talented cast and a Henry who was young in face but already weary of the world, it felt new again. Even as the battle dragged on, the play did not.

And even in a story about war, I found myself delighting in a brief but achingly romantic scene between Henry and Katherine. 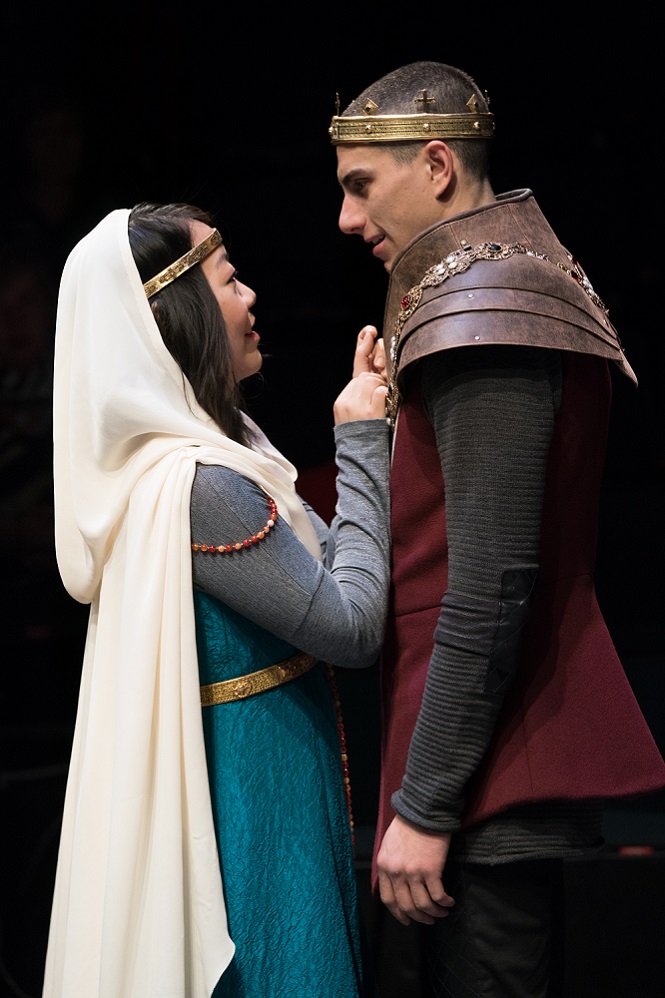 This could have gone on for an hour and it still would have felt too short. (Jessica Ko as Katherine and Daniel José Molina as Henry. Photo: Jenny Graham.)

I don’t quite know how this season will feel when it’s through. Perhaps I will remember this year as the one where things fell into place. Where the two leads I’d been hoping would get together finally did. I think of the moment when the couples in all of these radically different shows finally kissed, and everything was, for a little while, absolutely wonderful. 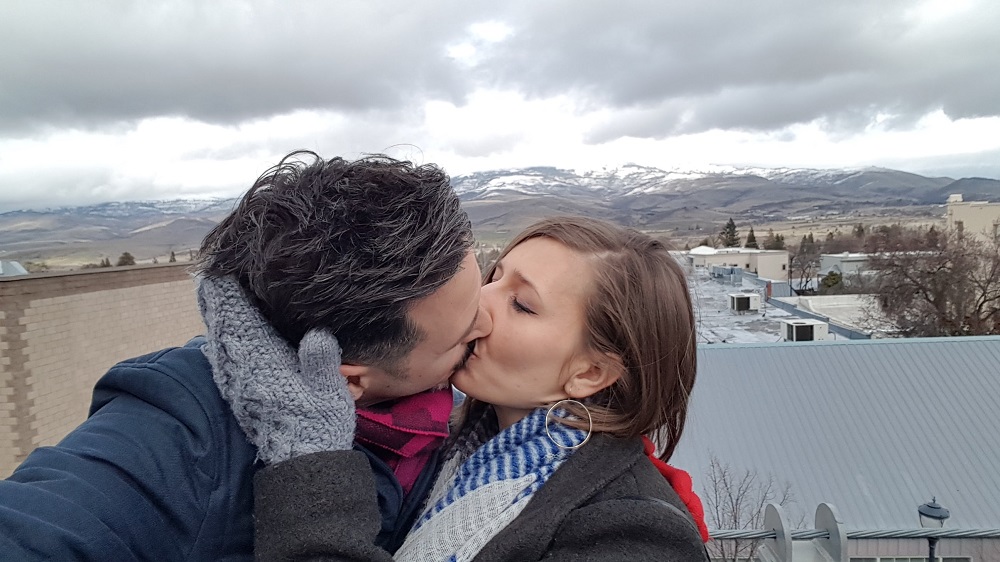 Maybe when I look back on this year – one that marks the tenth anniversary of being married to the love of my life – I’ll find that those romantic moments, some unexpected, some long-awaited, are what have stayed with me. We’ll just have to wait and see.