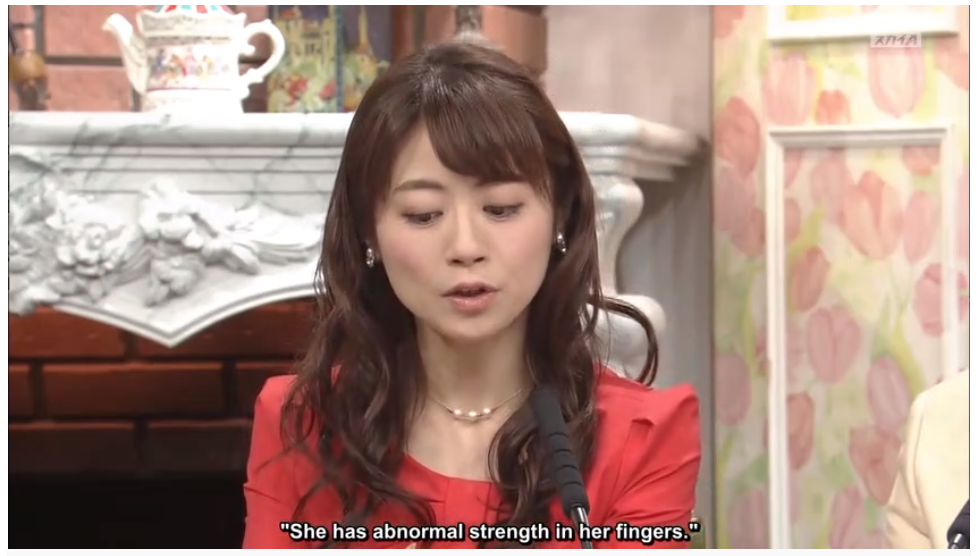 Posted in: Life in the Rest of The World

It is a strange statement of fact to say that I was on Japanese television long before I ever watched it. The circumstances of our engagement (which, for the uninitiated, was a very public proclamation involving the purchase of a local television commercial and, on my part at least, a great deal of screaming) meant that we were featured on no less than three television programs in Japan, and after repeated viewings I can safely say that I have no idea why they decided to feature us or what those programs were about.

I cannot attempt to write broadly about another country’s television programming any more than I could write about American television as a whole. In many countries, television is a massive behemoth, spanning genres and decades, and while no one would argue that there is one program that can encapsulate an entire country’s zeitgeist, it remains true that there is something uniquely delightful about arriving in a new place and trying to get a feel for it simply by turning on the television. This is not to say that you will succeed. But often times, you will be entertained.

And while scripted television programs are often all the same (indeed, a lot of times you will simply be watching the exact shows you see at home dubbed into another language), unscripted television – the world of reality TV programming and game shows – often plugs into a cultural in a way that other shows do not.

“Your game shows have a lot of screaming,” a friend of mine from Northern England tells me, and I nod, because, well, she’s right. “They’re very noisy.”

“And yours are … god, they’re just so calm,” I say. The prizes seem, by American standards, to be downright paltry. (I don’t mean to disparage – there is a sort of delightful purity to a baking competition wherein the grand prize is a ceramic cake stand. People are far less stabby when there’s not half a million dollars at stake.)

I’ve seen Dancing With the Stars in New Zealand – a country of 4.5 million people, and the locals we were watching it with were elated because one of the dancers was also their dental hygienist. And in Italy, I found a game show that sort of resembled Wheel of Fortune, with the addition of a bunch of women in cocktail dressers who were … backup dancers? For the host? And at some point they just kept doing these dance breaks?

So when Rand asked me if I wanted to watch a Japanese reality show wherein a panel of “experts” solves mysteries and problems that are submitted to them by viewers, I answered yes immediately, before I even understood what Knight Scoop was about. Watching the show, I instantly understood the premise, but now, as I try to explain it, I find myself struggling. The world is a big place, I suppose. It can be strange and lonely, and isolating, so sometimes it’s nice to have a total stranger come into your life and try to figure out why your father hasn’t spoken to your mother in 25 years, despite still being married and living in the same small apartment. Or have them bake a giant loaf of french bread for you – a loaf the size of a person – because you’ve always dreamed of carrying it through town. Or to have a puzzle expert help you figure out the ring puzzle in the waiting room of your doctor’s office that’s been taunting you for 15 years.

This is the premise of Knight Scoop. Viewers write to the show’s “detectives” (a panel of comedians and entertainers) with a problem or mystery – no matter how humble or small or obscure or seemingly impossible. Solving the mysteries is the sole focus of the show – there is no prize to be won beyond that. Sometimes it’s nice when reality TV is closer to the reality we live in. The mysteries that we truly want to solve are small and strange and hardly ever come with a cash prize. But when the pieces fall into place, you want to laugh and spin around and hug someone.

These were modest requests, but the resolutions felt grand. Yes, it was television. But it left me feeling better about the world, and that is a rare thing.

We watched as many clips as we could find on YouTube. The quality fluctuated wildly, and whenever we found a video where the images and subtitles were reasonably clear, we rejoiced. But slowly they began to disappear from the site, and now, as an American, Knight Scoop is near impossible to watch due to copyright and distribution issues.

“I can’t find it anywhere,” Rand told me sadly. I mentioned it to a Japanese friend of mine, and she shook her head, explaining that she had no idea where I’d find it here in America, and with subtitles. Then we spent far too long summarizing for one another different episodes we’d seen.

What had quickly become one of my favorite shows was now virtually gone. I sift through Google search results, trying to find some snippet of an episode, but I keep coming up short. It’s just one more small mystery, in a world that is full of them.

Update: I found some episodes online, and they’re subtitled. I’m basically screaming right now (no telling how long they will remain up).

This one is of a little girl who never loses a thumb wrestling match.

And this one is about eggs exploding in the microwave.