I have written about my love for Philadelphia before, and it seems only right that today, the day after the Eagles won the Super Bowl, that I would write about that town once again. I mean no disrespect to Boston – a city that is near and dear to my heart, but I do mean a ton of disrespect to Tom Brady, whose gilded perfection I find wholly intolerable.

Give me humanity. Give me flaws. Give me an enormous bell with a massive crack in the front of it. One that I still hadn’t seen, despite all my trips to Philadelphia. On my last visit back east, I remedied this. I went to see the Liberty Bell.

If you go in the off-season, this is a very easy thing to do. There will be virtually no line, and you can walk straight to it. You can even get a photo of yourself standing in front of the Liberty Bell, with someone else crouching awkwardly in the background. 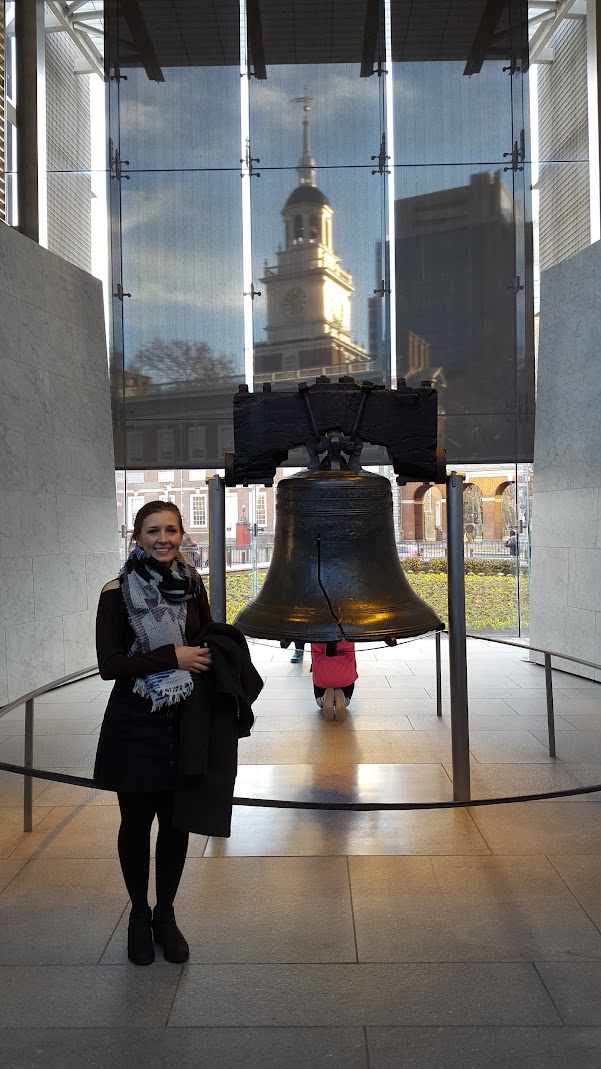 These are not perfect tourist photos. Philly is not about being perfect. It is not about having a chiseled jaw and a supermodel wife or five Super Bowl rings. No. Philly is about having photos that sometimes look like iconic pieces of American history are pooping out humans and that is fine.

The Liberty Bell was originally commissioned in 1751 by the Philadelphia Assembly to mark the 50th anniversary of the state’s constitution, and would arrive from London the following year. It was so brittle, it cracked almost immediately after being rung. This wasn’t the famous crack that we now see today on the bell – that would happen later (though it’s unclear when). The bell was recast twice more by two local metal workers (Pass and Stow, whose last names appear on it) in an effort to make it stronger and to make its ringing more pleasant to the ear. Success was middling. 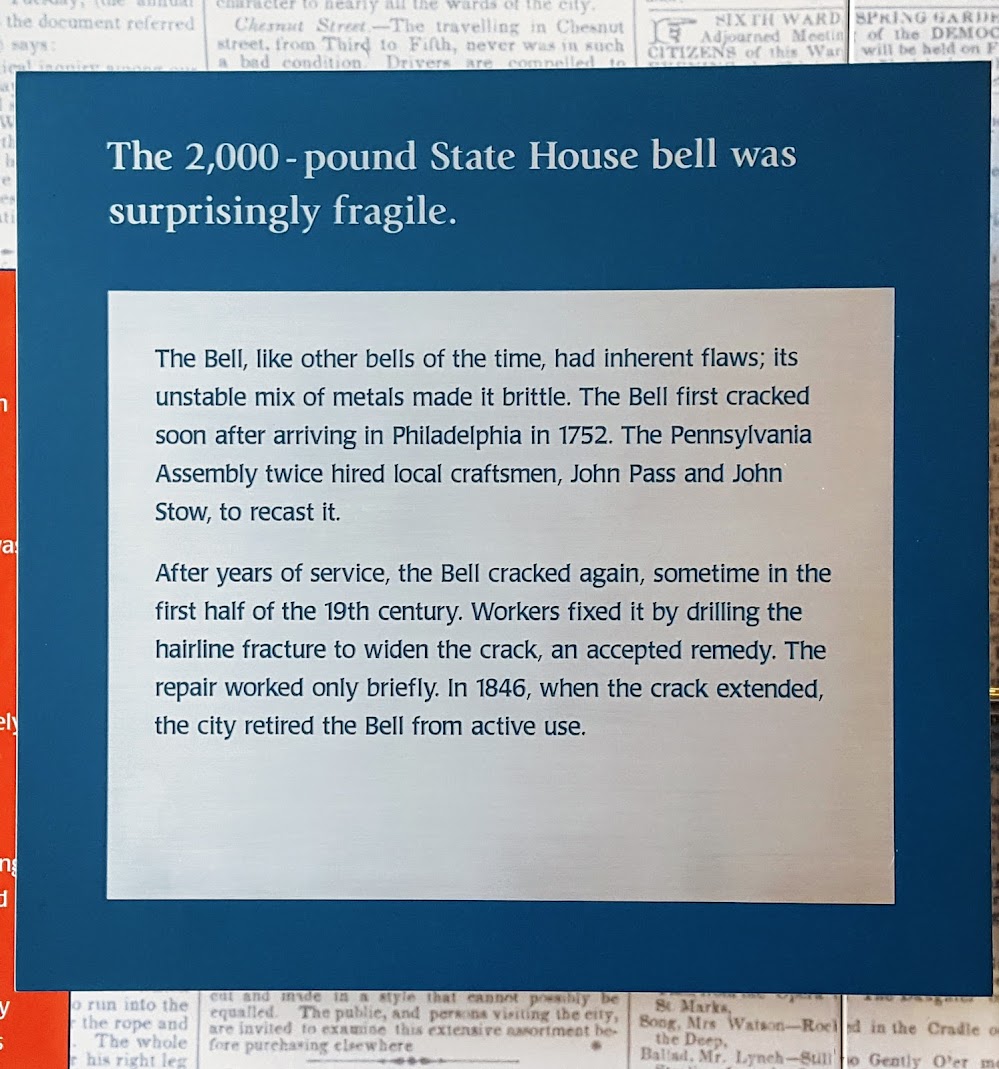 Look, we’re all sort of fragile sometimes, okay, placard? No need to get judgy about it.

While virtually everyone is familiar with the bell, I realize that its significance was lost on me. When my niece asked about it a few weeks later, I fumbled for an answer.

“Did they ring it when we declared our independence from the British?”

“That sounds entirely plausible, so let’s say yes, but please do not ask follow-up questions.”

The truth is a little murkier than that. The legend is that on July 8, 1776, the bell was rung to announce the first public reading of the Declaration of Independence – an account that, while heartwarmingly patriotic, is pretty unlikely. By 1776 the State House steeple was crumbling – there’s no way that the bell could have been rung without bringing the whole damn thing down. But it likely rang in the years before then, to call people together for special announcements or important news, and oftentimes stuff that might have pertained to the revolution. 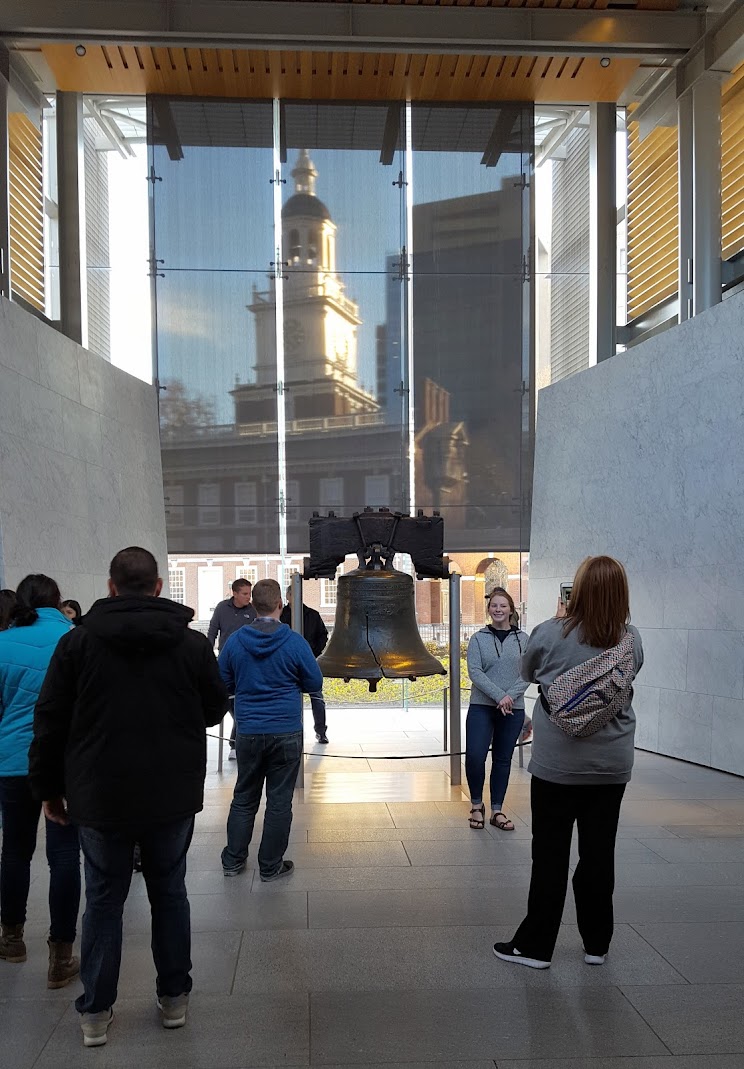 After independence, it fell into obscurity until it graced the cover of Liberty, an abolitionist publication, in 1837. It soon became a widely known as a symbol of the anti-slavery movement, and took on the name The Liberty Bell (before then it was simply known as The State House bell). It’s hard to say when it got its signature crack – but it was most definitely there in February of 1846, when attempts to ring the bell in honor of George Washington’s birthday failed because of the zig-zag shaped fracture.

The bell was not recast again. Measures were taken to make sure the fracture didn’t spread further. And now it hangs, silent and broken, with Independence Hall watching over it in the distant. And this is a good home for it, because imperfect things and wonderful things are not out of place in a town like Philly.