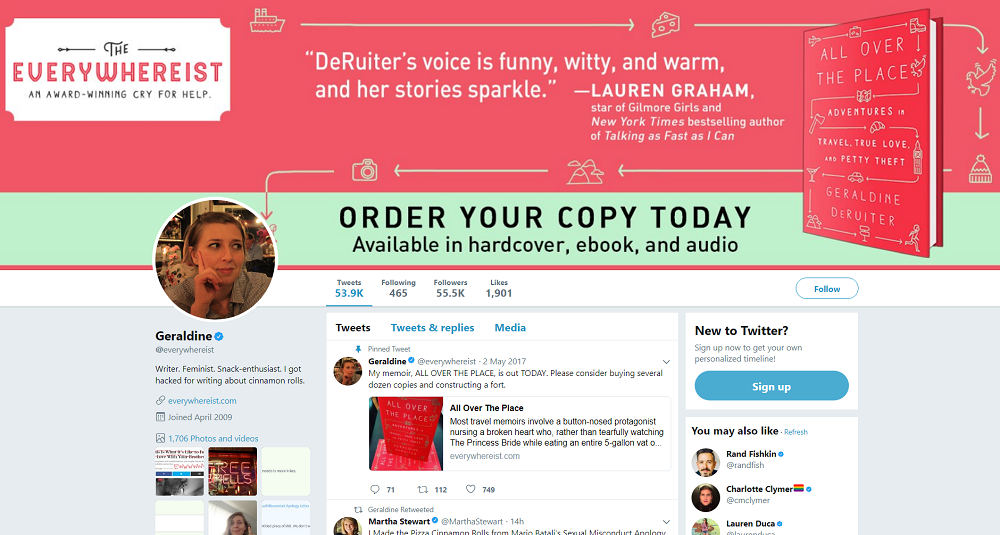 Posted in: Nothing to Do With Travel, Site News, Uncategorized

Last week, I wrote about what happened when I tried making the cinnamon roll recipe from Mario Batali’s sexual misconduct apology letter. The inclusion of the recipe – in a letter apologizing for sexual harassment – was so ill-advised that it made the time my uncle brought a camcorder to a funeral seem like a good idea. But the fact that it was also a shitty recipe … well … (insert guttural growling sound). By the end of the night, I was a being made of pure rage, held together with icing, and it was in that mindset that I ended up writing about the recipe, and about all the bullshit that surrounded it.

(Oh, also, I am using Leslie Knope GIFs throughout this post because she’s my patronus right now.)

A lot of people ended up sharing the post. I suspect because these days, most of us are made up of pure rage. Most of us are tired of shitty things happening to us, and annoyed by the shitty apologies that follow, and the shitty recipes that accompany those apologies do nothing to temper our anger.

Most of the responses I received were positive, and in such a quantity to be overwhelming. The restaurant critic for The New York Times said this, which resulted in me lying down on the ground, staring up at the ceiling and mumbling incoherently for a good five minutes:

When I mentioned Mario’s cinnamon roll recipe recently I was haunted by the sense that I hadn’t fully conveyed its absurdity. I was right, I hadn’t. This piece does. https://t.co/Kw05u4prqn

A few of the responses were awful, but I’ve found that having your own site means that you can edit hate comments. I often change them to what I think the author’s true intent was (before deleting them altogether).

I’ve had posts go viral before, and even the ones that aren’t about inherently controversial topics have resulted in abuse and threats and insults, because I dared insult the Paleo diet, or I dyed our milk pink, or I didn’t like Soylent and the man-children couldn’t handle it.

And I’m used to all that. Or I’m getting used to it. It still amazes me when people say hateful things to me because, you know, it’s a fucking personal blog and seriously I barely have time to shower so how do you possibly have time to write me a treatise on why sexual harassment doesn’t exist, Larry?

You get used to insults being hurled at you on every forum imaginable. You’ll find that people will create accounts just so they can tell you how reprehensible of a human you are because you made cinnamon rolls. But somehow, these assholes still manage to surprise you.

Those of you who follow me may have noticed that my profile picture – a snapshot of me taken in Belfast by my husband – was briefly replaced with a starry night sky. My name – previously just “Geraldine” (I don’t tend to use my last name because seriously who besides your great aunt is named Geraldine) was replaced with something that suggested sea life, misspelled to include two fucking umlauts.

Then on Monday, a few more tweets went out, including a pinned tweet taking credit for having hacked my account. While it was up only briefly, it included a racial slur. On MLK Day, no less.

Then, slowly, all of my tweets began disappearing as the hacker “wiped” my account – deleting all my old content – while I could do nothing.

The account was briefly locked. Then it wouldn’t load.

Why? Because I wrote about cinnamon rolls?

Frantic, I filed ticket after ticket with Twitter, but was told that the email address I was writing from was never associated with my Twitter account (it was). The hacker had changed my contact info, my profile picture, my name, and had deleted every single tweet I’d ever written, and Twitter was telling me that because I wasn’t emailing them from the right address, there wasn’t anything they could do.

I watched as an account that I’d had for nearly a decade was systematically dismantled in front of me as I hit the refresh button.

Twitter is by far my largest social network – it’s where I’m most active and have the most followers. For writers, it serves a very specific purpose: it is directly tied to our livelihoods. When I was shopping my first book around, every single publisher I met with wanted to know what my Twitter following was. This isn’t simply vanity or a trivial marker of fame – this is my goddamn career. Twitter is how I let people know when I’ve written something new; it’s how I promote speaking events, book readings, and how I yell at airlines.

It is extremely important.

Unable to scream on that website, I screamed on Facebook, forgetting how amazing and connected and wonderful my friends are.

They jumped in from every corner of the internet, expressing their outrage. I received messages of support via every single medium I still had access to. I had people who rarely use Twitter logging in just to report that my account had been hacked. I had friends reaching out to their contacts at Twitter, trying to rectify the situation. I am still absolutely overwhelmed by the people who spent time and energy helping me.

I can’t begin to name all of the people who spent time on rectifying this. But a partial list: Sara, Kara, Courtney, Naomi, Shauna, Peter, Charlotte, Shauna, Marika, Chrissy, Zac, Pam, Jen, Andrea, Will, and basically everyone I know: thank you.

And of course Rand, who assured me that everything would turn out okay in the end.

Late Monday night, thanks to their (and your) efforts, I regained access to my account. Twitter has retrieved my lost tweets. My friend Marc used a piece of software he built to find everyone who I’d previously followed and then wrote a script that re-followed them again. And yes, the tweet that Lin-Manuel Miranda sent me is still there. I still don’t have all of my favorites, but I’ve been told that Twitter will get those back, eventually.

I went and looked the in DMs the hacker sent while he had control of my account. Here’s a screenshot that was included in one of the DMs – it’s from a forum in which they sell off Twitter accounts (as well as Instagram accounts). I’ve omitted their names because I don’t know if giving them credit is a good thing or not. 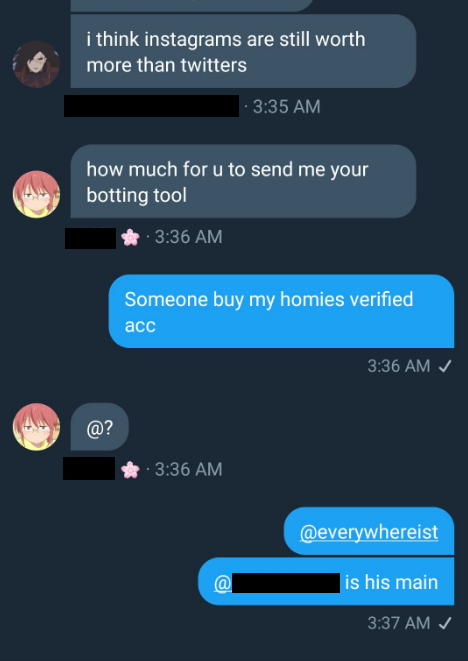 He was asking a friend of his – who is still active on Twitter – how to change the handle, and trying to sell off the account. This made me think that all of this was tangentially related to the post – my account got hacked not because of what I’d written but because it was getting a lot of attention.

But then I received this message from the hacker, who has since been kicked off Twitter: 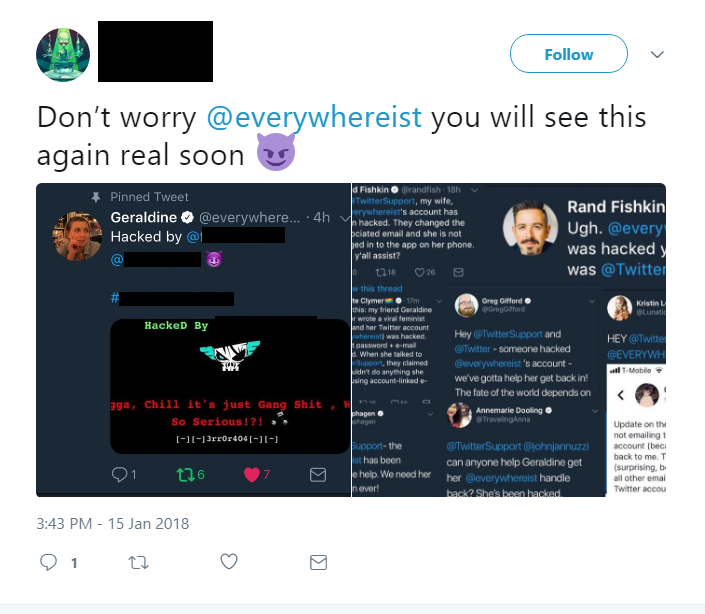 Since the Twitter hacking, numerous hacking attempts have been made on the blog. It’s been relentless, and as a result, the blog is running slower than normal. It no longer seems like these are just opportunists trying to sell an account. It seems like a concerted attack.

This morning, my site was down again, and I panicked. But it wasn’t because of hackers. It was because of this:

I Made the Pizza Cinnamon Rolls from Mario Batali’s Sexual Misconduct Apology Letter https://t.co/BMCTFmrgeY. Sent to me by my daughter,Alexis. I read it this morning. Amazingly a pro pos ! Enjoy!

MARTHA STEWART READ MY ARTICLE AND TWEETED ABOUT IT AND GAVE MY BLOG THE HUG OF DEATH.

I’m starting to realize that’s just how it is. Lows follow highs which follow lows. As a woman, your work can’t garner positive attention – particularly about an issue that matters – without garnering negative attention. For every thousand people who tell you how much they relate to what you’ve said, someone will scream something terrible and hateful at you.

You just have to have faith that the good drowns out the bad. And if the good voices aren’t loud enough? Then you just say it to yourself.

Over and over again.

P.S. – My friend Zac wrote a great piece about how to protect yourself from hacks, identity theft, and the like. You should read it.

P.P.S. – Blog traffic is crazy high, and we’re putting in some security measures, so load time is slower than normal right now. We’re working on it.