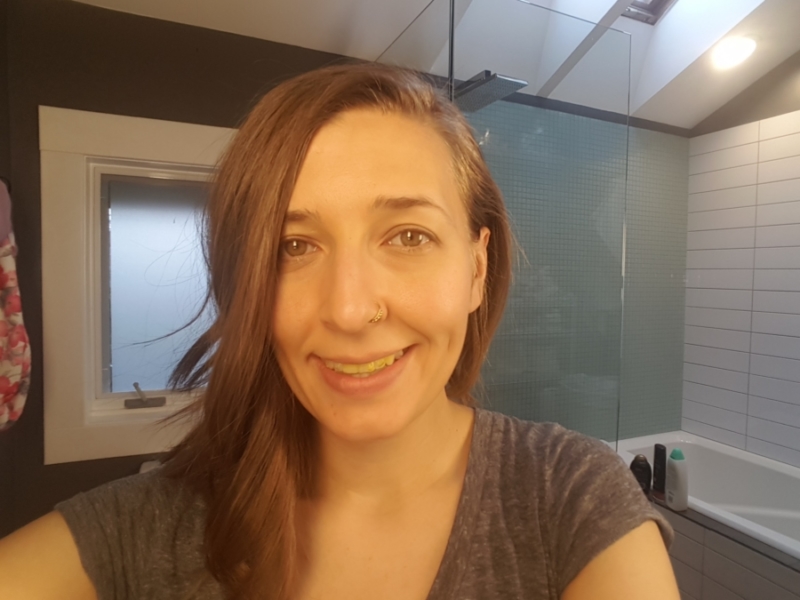 After 7 years of living in the same quirky little corner of Seattle, Rand and I moved across town to a bigger place in a smaller neighborhood. One would think, after literally years spent at careers that requires us to constantly move from one place to another, we would be pretty good at it.

At one point, Rand found a Tupperware of cooked chicken in a cabinet. Because that is where I had put it. But the cabinet is right next to the fridge, so I think I get points for proximity. Rand disagrees.

Yesterday, I’d decided to organize the kitchen. I bought adorable plastic containers to display my baking ingredients, and poured a bunch of M&Ms into one. I’d put the lid on top, but I’d apparently failed to dry it properly, because a few drops of water leaked onto the M&Ms. Panicked, I isolated the wet M&Ms, and found another container to pour the dry ones into. But because the entire process was noisy and Rand was on a call, so I went outside to transfer the M&Ms and a bunch fell on the deck. But the deck is pretty clean, so I started picking them up and eating them without realizing it.

It was 9am. I was in my pjs. I’m pretty sure the neighbors saw.

And while my offenses resulted in me having to throw out chicken and eat floor M&Ms, I feel like his crime – which involved him taking my alphabetized books and re-organizing them by color – was grounds for divorce. I came home to this. 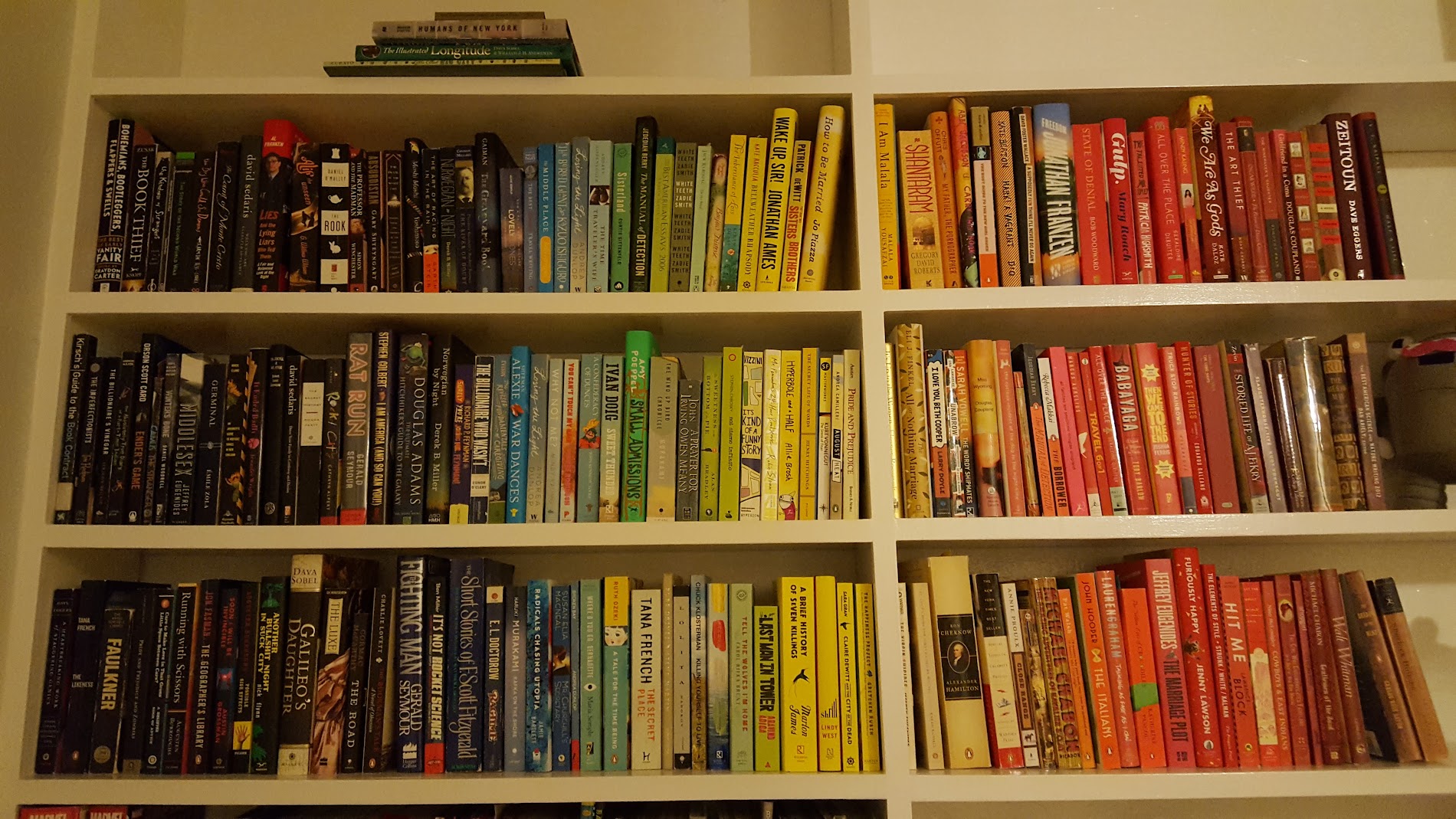 WHERE DO THE BOOKS WITH WHITE SPINES, GO, HUH, RAND?

This is so many levels of bullshit I don’t even know where to begin. I stared at it, mouth agape, before finally whispering, “Why would you do this? Why would anyone do this?” And Rand said, “Oh, I’m not done yet” and I screamed “NO YOU ARE SO DONE.”

It’s been a week. The books are still arranged by color. I now avoid that room. And speaking of color, I somehow dyed the inside of my purse neon yellow.

I don’t know how this happened. Over the last few days, I’d noticed that my hands would occasionally be stained yellow, but I’m the sort of person who puts chicken in the cabinet, so I just sort of rolled with the yellow hands thing.

And then the yellow started to spread, and I couldn’t find the source, and it was everywhere, and I started to panic, because what if it was jaundice? Which I know doesn’t work like that, but it is hard to be reasonable when your husband organizes your fucking home library by color.

So then I reached into my purse to pull out my Invisalign tray and the whole goddamn thing was highlighter yellow. It’s my last tray, which means that instead of getting a new one in a few days, I have to wear it for a month. 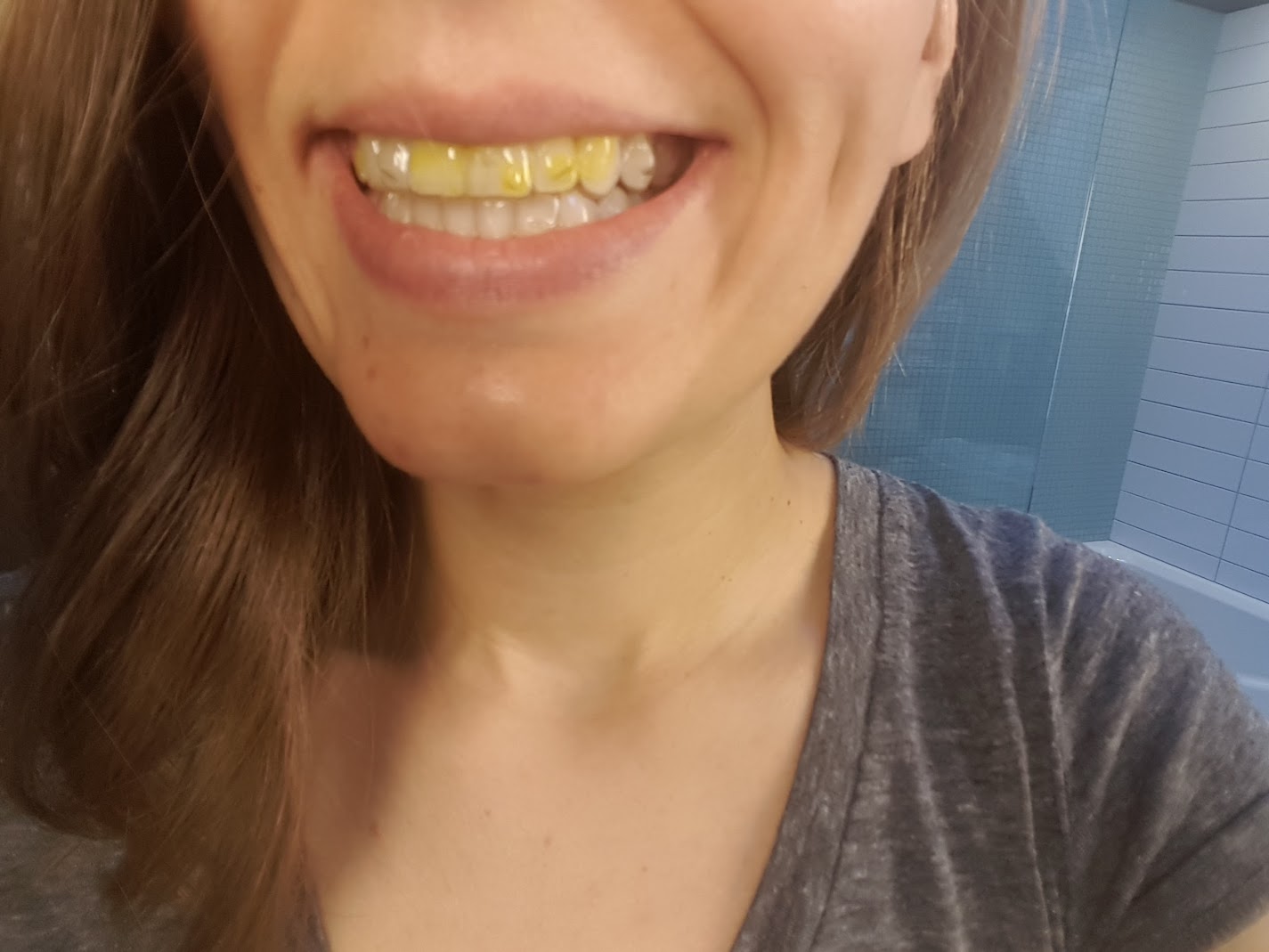 Everything I do is terrible.

This, combined with the fact that we’re using cardboard to cover our bedroom windows until our blinds come in, and the whole eating M&Ms off the back deck mean that the neighbors have stopped talking to us entirely. Rand is delighted about this development. 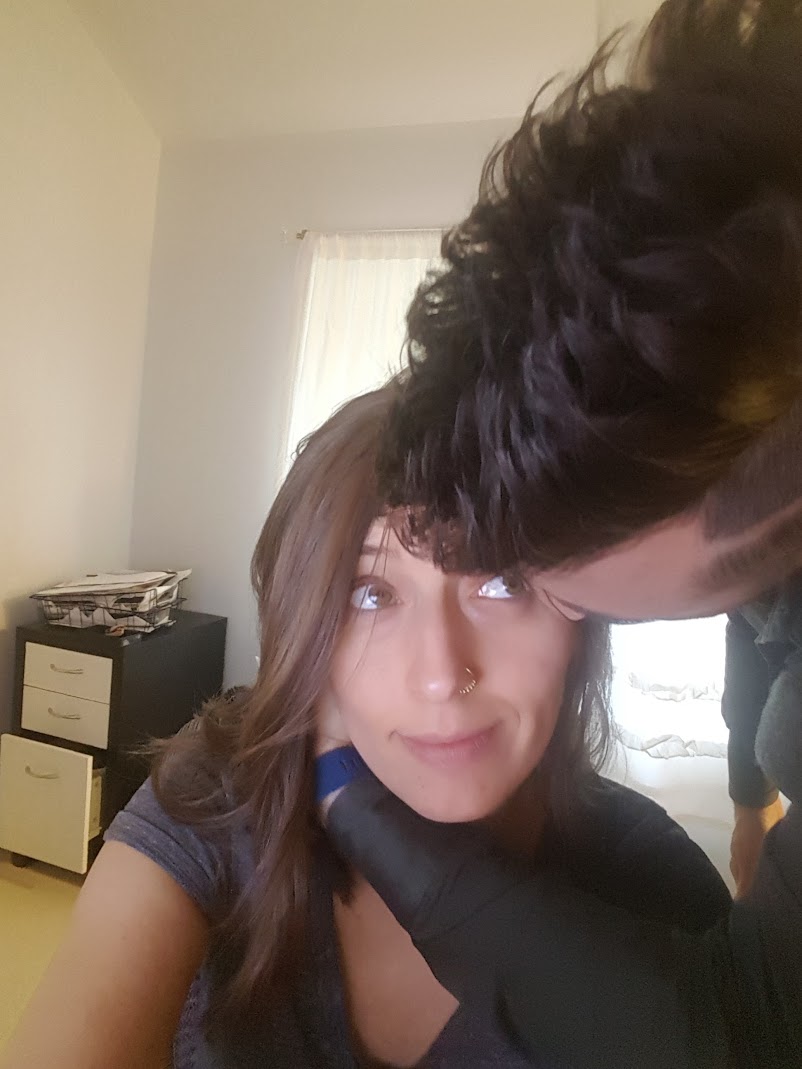 Here he is thanking me for alienating the neighbors. The pile of papers behind me is my inbox or something. 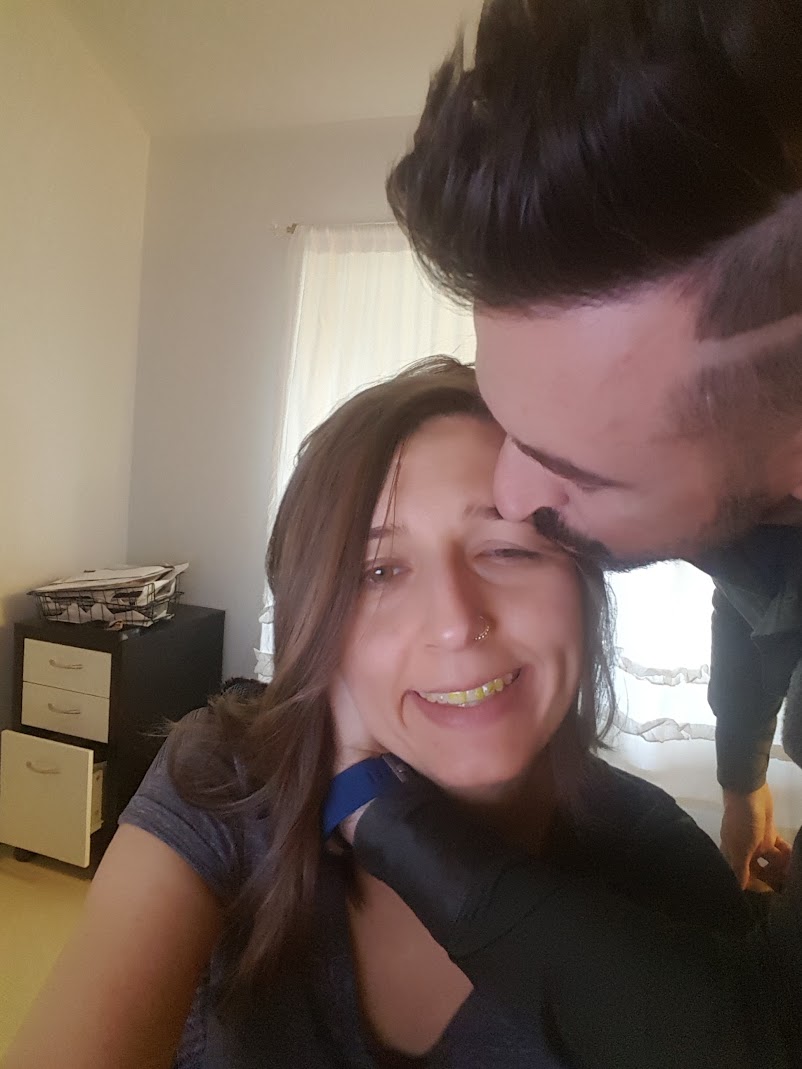 This photo becomes decidedly less cute when you see my teeth.

Anyway, I called my orthodontist and they can’t stop laughing. I look deranged. 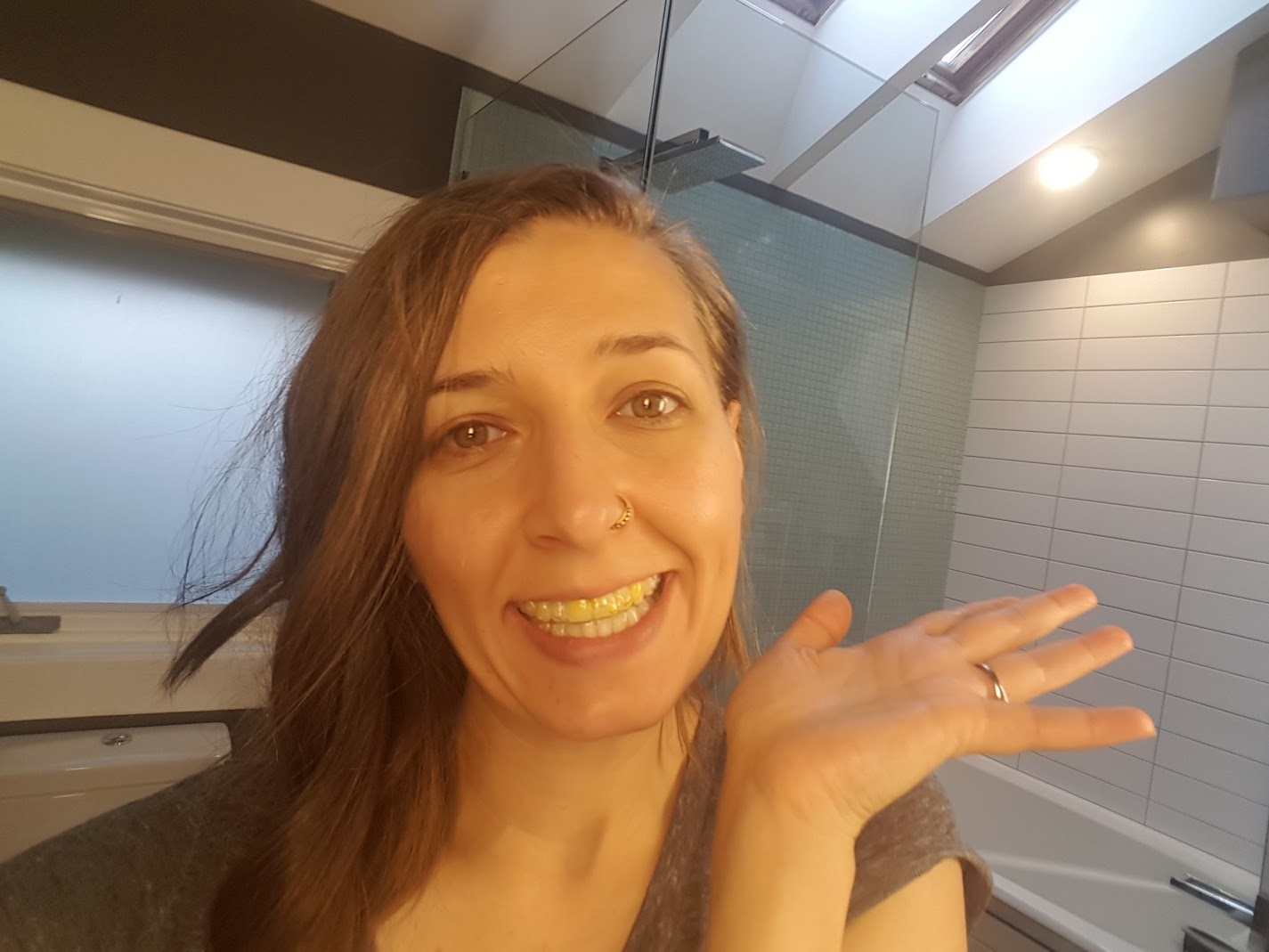 The moral of the story: don’t dye your invisalign yellow and don’t put chicken in the cabinet and don’t organize your books by color and never move.