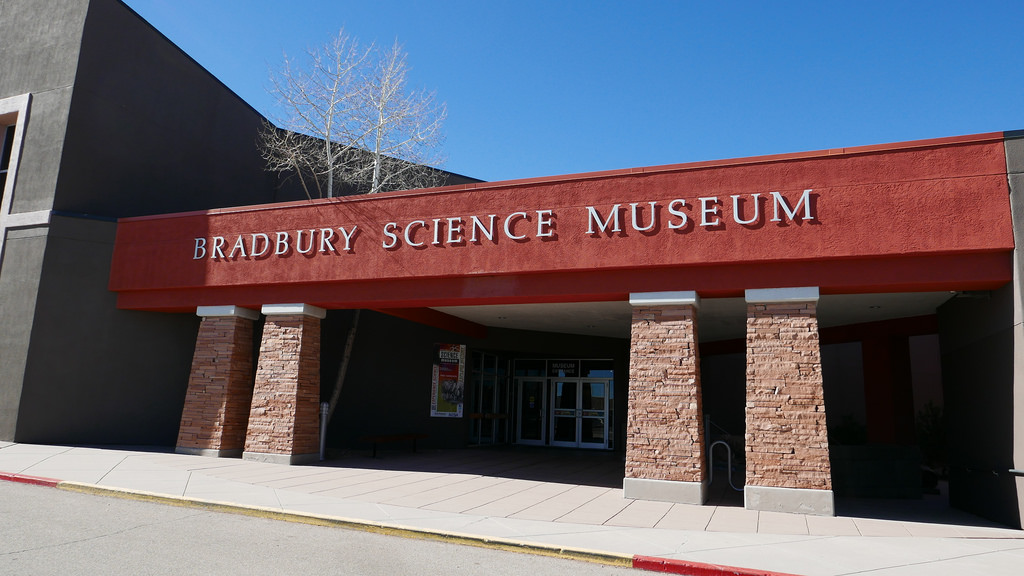 Rand’s work had brought us to New Mexico for the very first time, and in a few weeks, we’d be in Japan. The timing was unintentional but it felt like my path was already set. If I was going to walk through Hiroshima, now long rebuilt, I couldn’t do so without considering the consequences of the bomb we dropped. And I couldn’t do that without visiting Los Alamos.

Los Alamos sits on a mesa, surrounded by the burnt umber of the Jemez mountains, under blazing blue skies. The drive up is lonely, and as the elevation rises the air grows cooler while the sun seems to grow more intense. 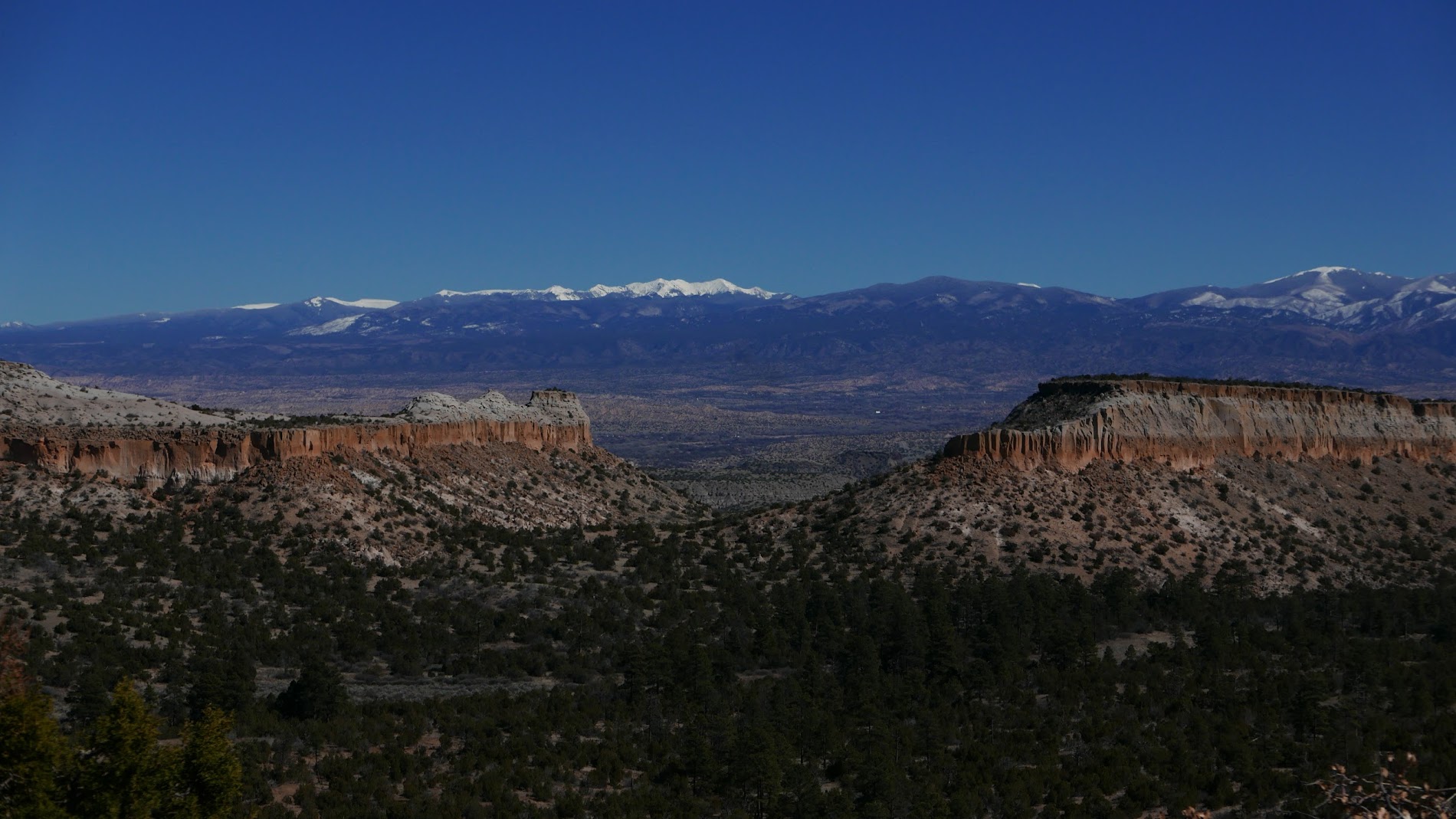 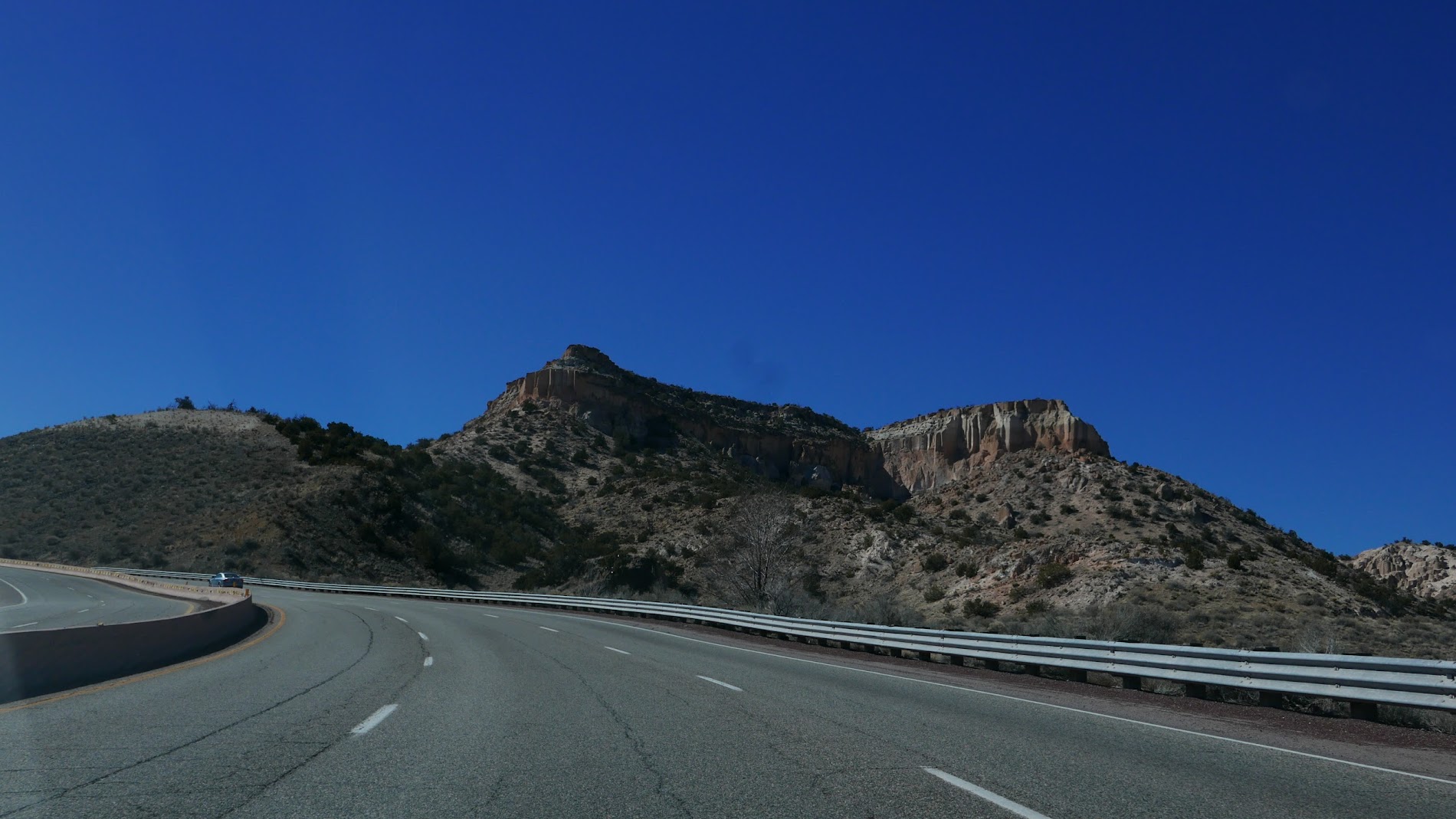 There is a single road that runs through town, and on either side there are a few sparse strip malls that house cafes and shops with names that suggest Los Alamos’ past: Bathtub Row Brewing C0-op, The Manhattan Project Restaurant (recently shuttered), and a half dozen others with the word “atomic” in their name. 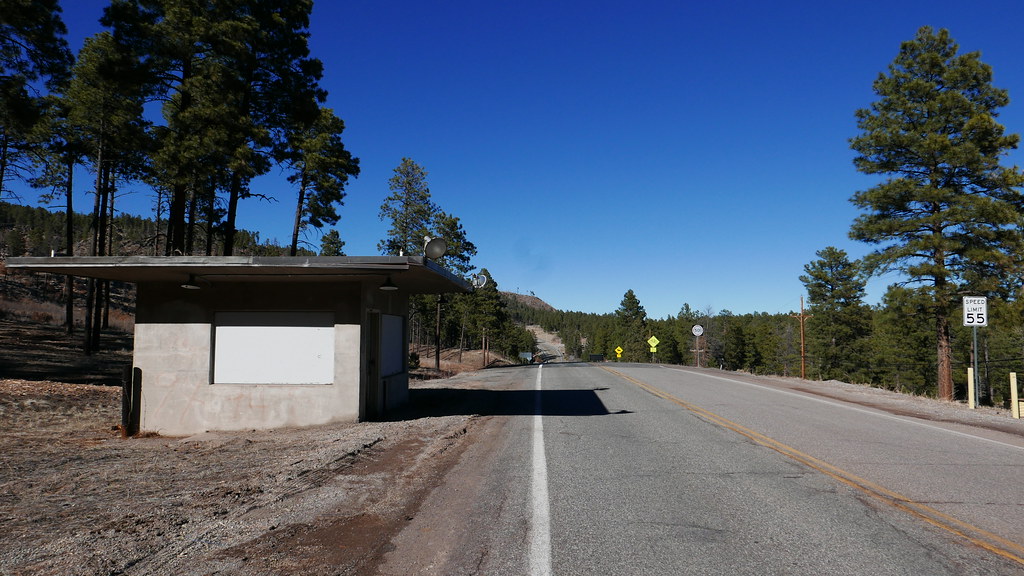 In the early 1900s, the only thing here was a well-regarded ranch school for boys, which boasted graduates like William S. Burroughs and Gore Vidal. At a time when illnesses were treated with exposure to fresh air and sunshine, wealthy parents sent their sickly young heirs to the New Mexican mountains to enjoy a rigorous curriculum of study and outdoor activities. In 1942 the government took over the site, purchasing it from owners who had little say in the matter (who had, in turn, taken the land from indigenous people who had little say in the matter), and rushing a final graduating class of students out the door.

The U.S. government had been scouting for a site for The Manhattan Project, and Los Alamos met their exacting specifications – it needed to be 200 miles from an international boundary, isolated from the general population, with easy access to water and plenty of sunshine (this latter point wasn’t simply an indulgence – researchers needed clear skies so they could see the bomb’s detonation). The school’s location would prove an ideal site – high on a mesa, all entrances to the facility could be secured, and the dormitories could be repurposed as shelters for scientists and staff (though others would be built to accommodate Los Alamos’s growing population). The more well-appointed dorms had bathtubs and became known as Bathtub Row.

As physicists and military personnel poured into Los Alamos, the town began to grow. People who were assigned there brought their families. A school was built. Because there were so many single men working at the facility, young women were hired to perform clerical work in order to build a better social dynamic while people were working on the atom bomb.

That’s the thing about Los Alamos – there is this strange mix of the mundane and the extraordinarily terrifying. The deaths of more than 200,000 people resulted from this place. And they also held dance parties.

The Los Alamos National Laboratory now functions as a museum (The Bradbury Science Museum), one that largely skirts around the implications of the dropping the bomb. In their attempts to offend no one, the placards are shockingly dissatisfying. 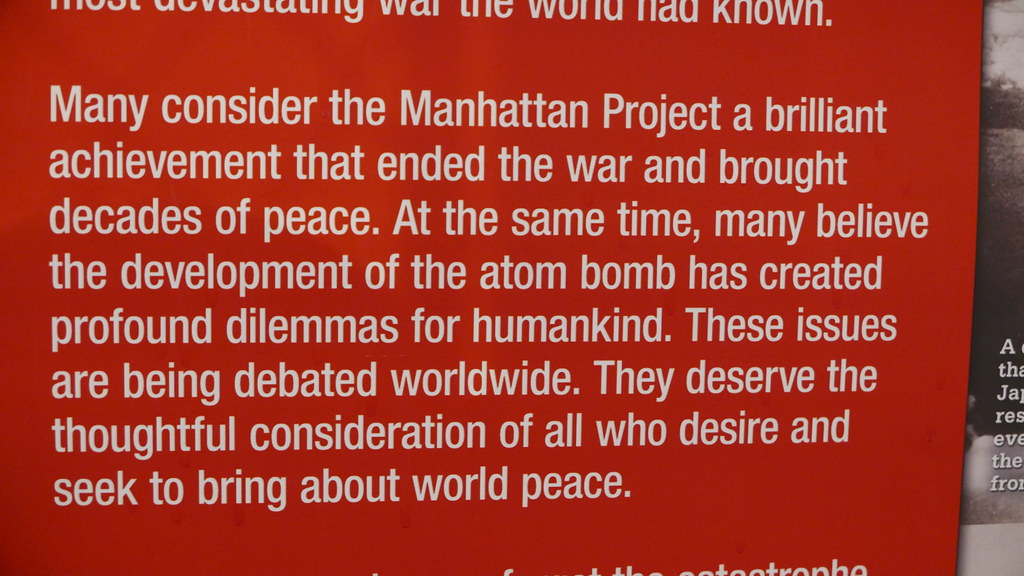 There are questions that remain unanswered – like how Truman’s directives that the bomb not be dropped on civilians, and that the Japanese be warned of the impending bombs – were ultimately cast aside. 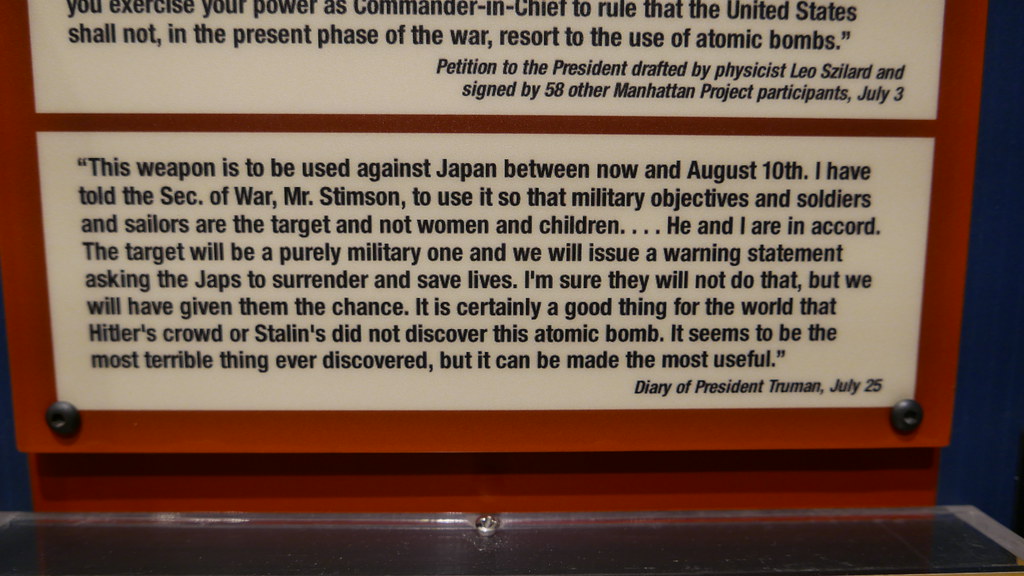 Hiroshima and Nagasaki had some military importance – but as I noted in a previous post, they were largely chosen due to the fact that they hadn’t been bombed yet – and so they could showcase the weapon’s destructive capabilities more clearly. The result was heavy civilian casualties. 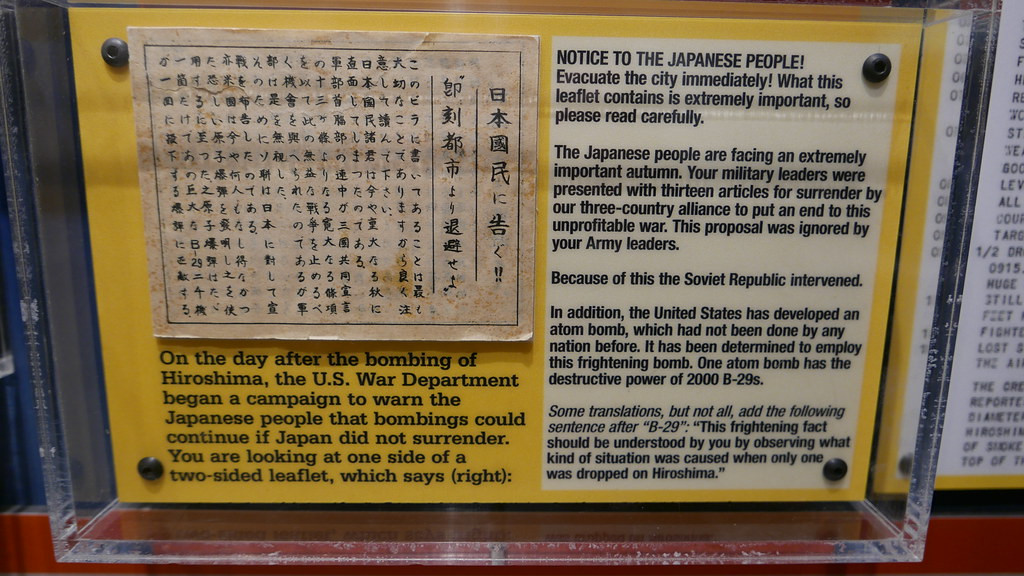 Some flyers were dropped on Japan, warning of additional bombs *after* Hiroshima had already been destroyed.

I found the flight log from the bomb drop on Hiroshima to be particularly startling in how clinical it is. 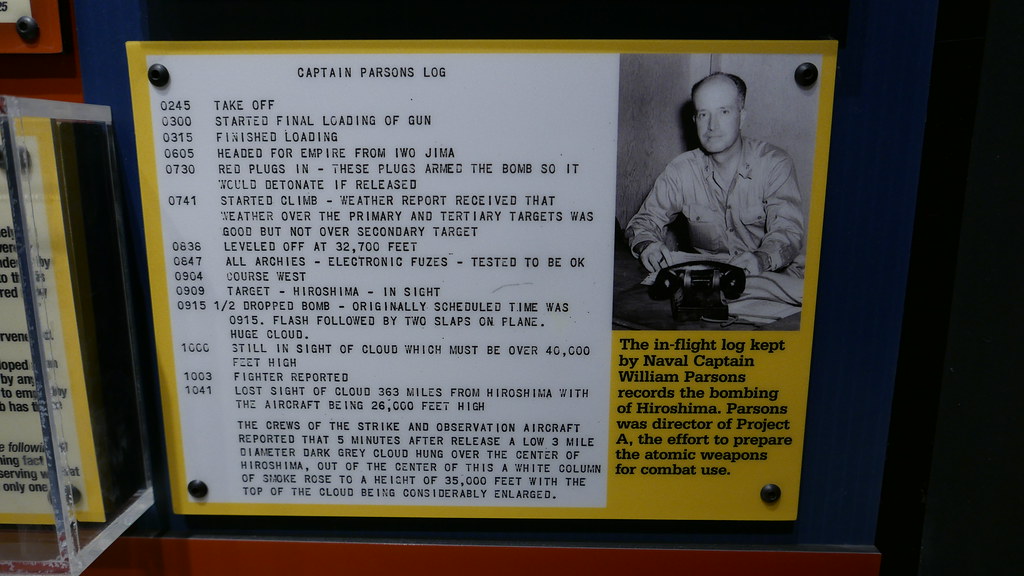 The museum itself doesn’t shy away from taking a distinct position about the bombs – it describes the women and men who worked on The Manhattan Project as heroes. 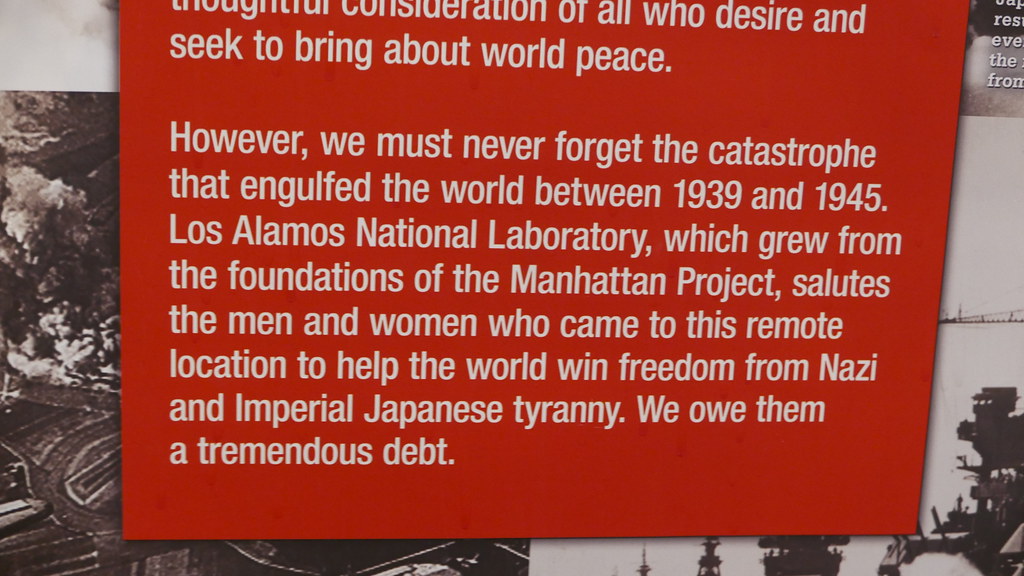 Most were oblivious to what they were building. They understood it was some sort of government project as part of the war effort, and when they were asked by outsiders what kind of work was “going on up there” their answers were vague or flippant. One woman who was only 16 when she worked at the post office of Los Alamos told people that they were installing windshield wipers on submarines.

As for the physicists, few, if any, considered their work heroic – for most, it was simply necessary, a request from the government to which they could not say no. Einstein said that if he’d known the Germans would fail in their endeavor to build the bomb, he’d never have advised the President to start building one. Oppenheimer, who was the lead on the Manhattan Project, claimed that “I carry no weight on my conscience”, but seemed to go through his remaining years a haunted man. While witnessing the explosion of the Trinity Test, which preceded the bombings, he quoted the Hindu scripture of the Bhagavad Gita, saying, “I am become Death, the destroyer of worlds.”

Of the many physicists mentioned in the museum, it was Richard Feynman who stood out to me more than the others, perhaps because of his age. Feynman was 27 in 1945; during his time working on the Manhattan Project, his wife suffered from tuberculosis (she would die a few weeks before Japan was bombed). He wrote about his time in Los Alamos with a sort of light-hearted detachment, and his later years would be characterized by an over-the-top personality. Many suggest that this was a facade – his contributions to the creation of the atomic bomb and his regrets surrounding it were profound. They claim his quirky persona was an affectation born from a man mired in grief, one who could not handle what he’d done. 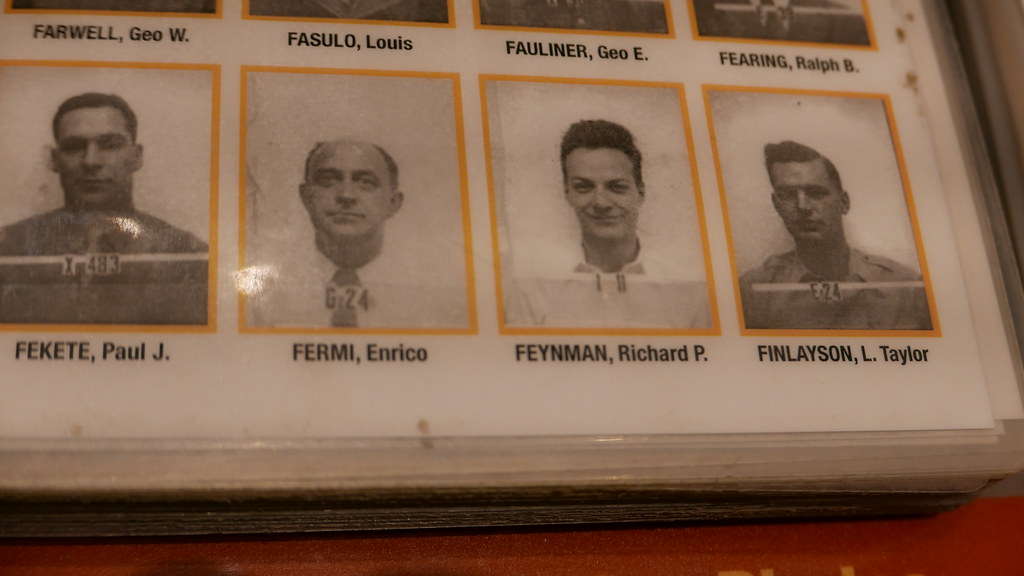 He was charming; he had been madly in love with his wife. He was a chauvinistic asshole and a misogynist. Remember: People are not simply all good or all bad. They are murky and strange and complicated.

It’s not that I think the museum at Los Alamos is willfully misleading visitors – I simply think they have a particular narrative that they wish to tell, and it is one among very, very many. To this day, the ground underneath Los Alamos’ vivid blue sky remains toxic from nuclear waste. Like everything else here, the truth is far more complicated that what we can see. It’s a much harder to story to tell.