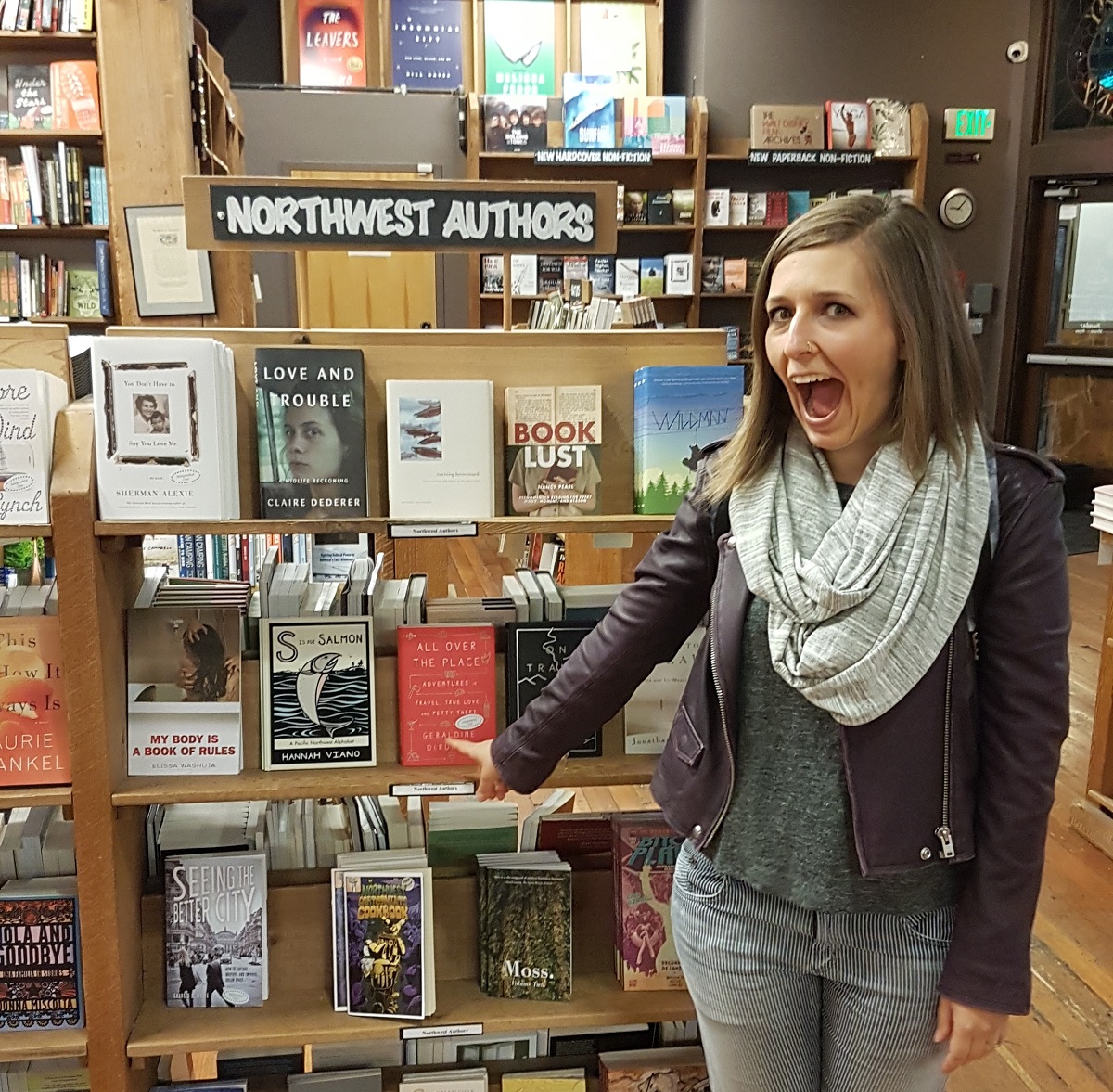 Being a writer means that you’ll never have a shortage of criticism, whether it is offered up to you in heaping scoops of vitriol from faceless masses on the internet, or you gather it yourself from your never ending well of neurotic self-doubt. Hooray.

Add “being a woman” into the equation and your cup overfloweth.

Fortunately, we writers are rational beings and so we give as much credence to positive comments as we do negative ones. JUST KIDDING. We focus on the terrible stuff that is said to us like we’re being paid by the hour. 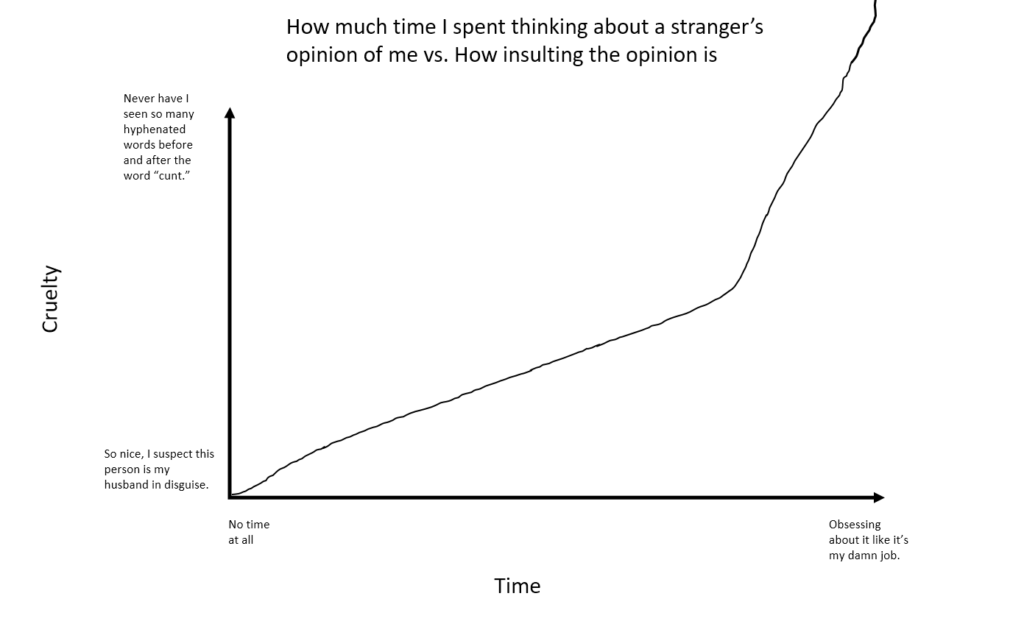 My book came out two months ago. The reviews have been … well, glowing.

.@everywhereist a women on my plane saw me reading your book & said she’d been hearing about it & wanted to know if it was good (yes!) ☺️

@everywhereist you made my dating profile. That’s when you know you’re successful, right? pic.twitter.com/vYOYFAhSuM

If only it was the kind things that people said about us that kept us up at night. Alas. The negative reviews are few and far between, and I focus on them far more than I should.

Some of the critiques are legitimate: My language is too vulgar (you bet your mom’s clitoris it is); I think I’m funnier than I am (how on earth could they possibly evaluate this?); I pee on things out of rage (guilty).

But then, embedded in a grammatically  creative Amazon review, I came across this line:

And like all things that strike a nerve, it did so because it hit close to home. For years, I’ve dismissed the writing that I’ve done on this blog. I’ve shrugged when people asked me what I did. I somehow convinced myself that writing a blog for a decade somehow means that I’m not actually writing, even as the awards and the accolades and the positive press began to accumulate.

Nearly every single blogger I know has done this same thing. And this mentality is so incredibly, utterly, profoundly wrong.

Let me be clear, before the pedants emerge from the ether, pushing their glasses up their noses as they whisper, “Well, actually“: not everyone who blogs is a good writer.

But not everyone who publishes a book is a good writer, either.

The criticism that we bloggers endure emerges often not from our work itself, but from the medium that we’ve chosen. The poet is never accused of not really being a writer, nor is the columnist, nor the essayist. But the blogger often is. We are accused of being literary dabblers, amateurs, hacks.

The transition from writing this blog to writing a book was not a seamless one. But that’s not because I’m a blogger – it’s because writing a book is difficult. No one, absolutely no one, knows how to write one until they’ve actually done it. It’s like having brain surgery or enduring the loss of a parent: you learn how to do it only by doing it.

My editor told me that the last few chapters of my book needed far less editing than the first few.

“That always happens with first-time authors,” she said. “By the end, you’ve figured out how to write a book.”

But to say that my years of blogging didn’t contribute to that is insane. Blogging taught me to write on schedule (and not just the self-indulgent time frame of “when inspiration strikes”). It taught me how to work through writer’s block, how to experiment with style and storytelling. It helped me figure out my voice.

Writing a blog taught me how to write.

And if I’m painfully honest, writing a book was, at times, far easier than blogging. Those early years of The Everywhereist were brutal. I wrote for a non-existent audience, I wrote through the headaches of a yet-to-be-diagnosed brain tumor, I wrote through threats and hate mail. I wrote each and every day, and I wrote alone, without an editor to gently guide me through the bramble.

But so many of us dismiss the legitimacy of blogs, even though having a strong online following is critical to getting a book deal. Literally every single publisher I spoke to wanted to see my blog’s stats. One told me that my manuscript was excellent, but was worried that my traffic just wasn’t enough.

Can emerging writers get published without a strong platform or social media following? According to my editor, yes, but you shouldn’t count on it.

That’s so important, I need to state in again in all caps. BEING A BLOGGER IS A KEY COMPONENT TO GETTING A BOOK DEAL, BUT WE’VE MANAGED TO CONVINCE OURSELVES THAT IT IS THE PRECISE REASON WHY WE CAN’T WRITE A BOOK.

When we critique bloggers for simply being bloggers (and not say, because of the quality of their writing), we risk losing a profound volume of literary and non-fiction work. And that’s a big problem, because there are already so many things that keep writers down. We don’t need to do it to ourselves.

There’s another important reason why we need to not dismiss blogging: it offers a platform to writers in underrepresented demographics and a means for them to promote their own work. (In the past, I’ve noted my own problems with being self-promotional as a woman.) 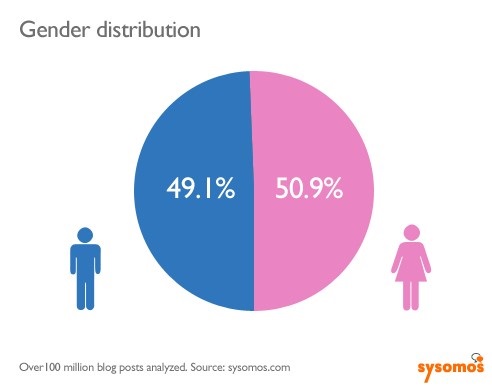 Women, PoC, People with disabilities and chronic health issues, LGBTQ and all of the overlaps in those Venn diagrams – blogging makes it easier for all of us to be heard. (Sadly, it’s not entirely income agnostic. Blogs themselves can be set up entirely for free, but other socioeconomic factors, such as free time, and safe, easy access to a computer, Wi-Fi, or a library can easily get in a writer’s way).

But these stats don’t hold when we look at works that are published in major publications, books that are getting the most press and awards, or the deals that publishers are handing out. According to VIDA, an organization that tracks gender bias in literary coverage, The New Yorker published 459 pieces by men and only 159 by women in 2011. The New York Times Book Review covered 520 authors who were men – almost twice the number of women authors they reviewed. From March 2012 to April 2013, an analysis of the Guardian Review’s poetry pages revealed that they’d reviewed three times as many poetry books by men as they did by women. And though women publish more novels than men (60 vs 40%) the vast number of literary awards go to men, often writing about male protagonists.

Publishing itself may be an industry predominantly made up of women but that doesn’t mean that women are the ones getting visibility for their books. When a Cleveland bookstore turned all the books written by men backwards (showing just the white pages instead of the spine), the results were shocking – a sea of white shelves.

I suspect it’s due to a myriad of factors – institutionalized racism, sexism, ableism, homo- and transphobia, and inherent problems with the publishing industry itself. The point is, as bloggers, we have enough shit against us. And for those of us who aren’t white, cis-gendered men, we field a disproportionate number of rape and death threats. We don’t need the additional disparagement of being told we aren’t writers. Especially when, for many of us, blogging is what is going to get us our book deals, and may be one of the only avenues in which we can actually sell our books.

If you want to critique me on my shitting writing, I’ve an ample volume of work for you to peruse. Tear apart my memoir, if you are so inclined (though I will ask you to buy it first. And maybe a few copies for your friends, too. You could have a book club wherein you discuss how awful it is!) But don’t tell me that because I’m a blogger, I’m somehow not a writer.

Because I assure you: it’s the exact same damn thing.

All Over The Place, Book, Essays