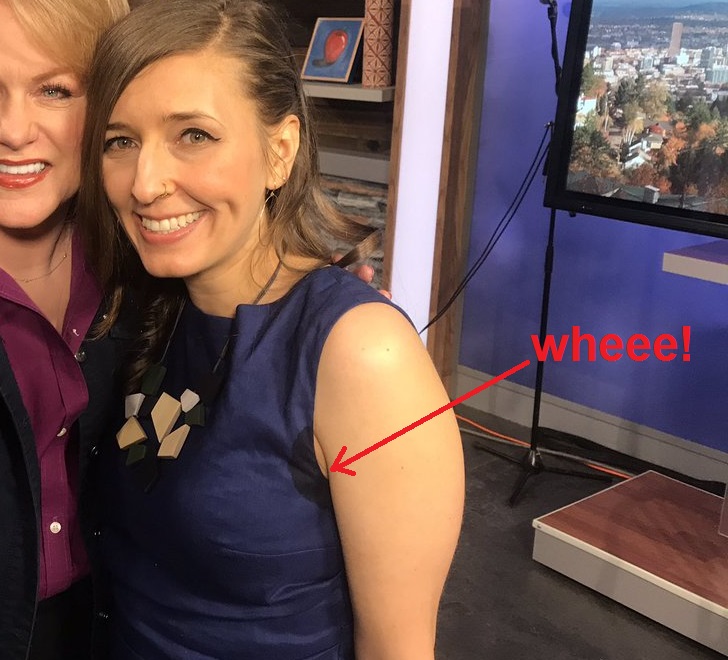 I’ve heard that writers are never really done with the books they’ve written. That there are sentences they’d wished they could change, long after the book goes to print. That even after it hits the shelves and the reviews are in, it haunts them like the memory of an old love they can’t seem to forget. Sometimes it becomes tortuous and sometimes they become cliches: the writer who is tormented by their own work, the narcissist who can’t get out of their own head.

I figured I’d be the exception to the rule, because that’s how everyone always sees themselves. We are different, we are unique, we are not the ones who will beat their heads against their laptops or frantically pace the room, trying to figure out the magic combination of letters and punctuation that will appease our self-doubt. By the time my book was sent to print, I was ready to be done with it. I’d exorcised my demons, and I’d crossed the finish line.

I didn’t realize there was another race to run.

I spent last week doing TV interviews in Seattle and Portland. This entailed me nervously doing up my hair (in the middle of a wet June, it resolutely did the opposite of whatever I asked. I straightened it, and it curled. I curled it, and it straightened. I asked it to be hair, and it turned into a coiling mass of snakes upon my head. Alas, the usual.) I applied more make-up than I did on my wedding day and realized as I do not know how to put on make-up.

And though I felt relatively calm, I found myself sweating so profusely that it left stains on my dress (the same one I wore all three times. I am not one with an extensive wardrobe). 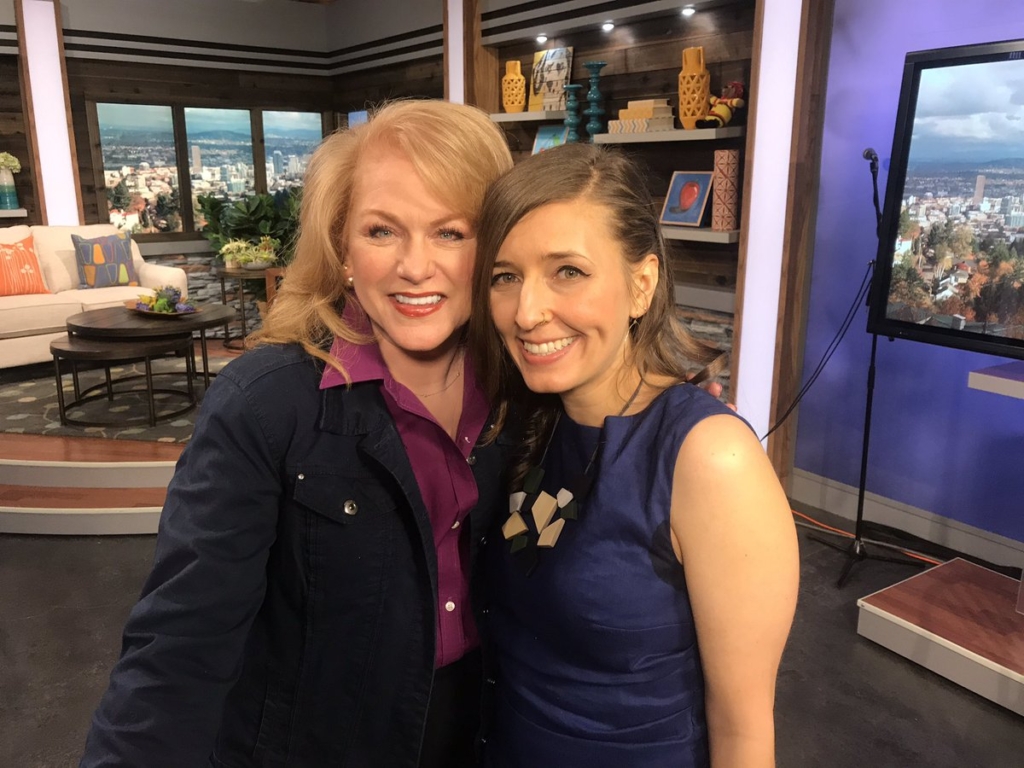 Also, I hadn’t quite figured out what to do with my hands and my sartorial decisions left me looking like I was wearing a sea cucumber. 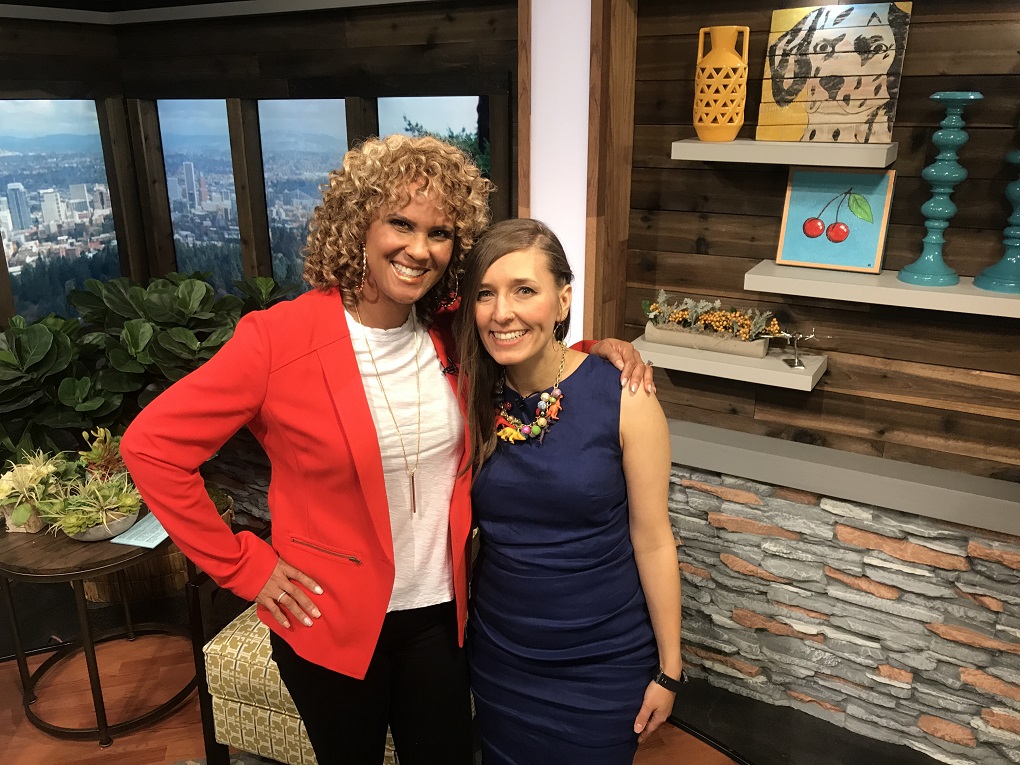 Also, can we talk about how effortlessly beautiful Tra’Renee is? That’s fine. I’ll just stand next to her and look like a Hobbit.

Portland’s KATU was kind enough to have me on both their morning and afternoon shows, and somehow I managed not to incur FCC fines during either live taping (fun fact: when I made that joke via Twitter, the executive producer came in and said, gravely, “We do not have a time delay so please do not cuss.” Aside to Steve: I am very sorry to have caused your blood pressure to spike.)

We recorded two segments, and I did my best to be funny. If you want to see how many weird facial expressions I make when being interviewed, here you go:

Earlier in the week I was on KING5’s New Day Northwest, which was rather remarkable as it took place at the same station where I was an intern when Rand and I started dating, back in 2001. The producer stared at me for a beat before saying, “I know you.” And in the span of a few minutes, we covered 16 years.

It felt like a miraculous sort of bookend, the sort of thing that you would find in, well, a memoir. It was when I was an intern at KING5 that I first called Rand my boyfriend. The crew was interviewing Apolo Ohno for the Salt Lake Olympics, and I flippantly mentioned that I thought the speed skater was cute. One of the producers was keen to play matchmaker, and it was only as she was literally dragging me by the arm into the studio to meet him that I screamed, “I HAVE A BOYFRIEND.”

(In the years since, Rand and I have referred to the Olympian jokingly as “the other man” and “the one who got away.” Ohno has yet to be reached for comment, but let’s assume that he disagrees vehemently with all of that.)

And while I loved being on TV (it is the hallmark of any attention fiend), there was something utterly terrifying about it. I felt like everything was riding on it, and that the future of my book and my life depended on how charming I could be in the six minutes and thirty seconds that the camera was on me. Sometimes my brain leaves me during those moments, and when it returns, I wonder if I’ve been picking my nose.

I always thought I’d be better at this. That’s been the hardest realization: writing a book is not enough. Even if you are happy with the final product, even if it doesn’t quite haunt you, you still aren’t done. You have to sell it. And it is only as you sit, trying not to stare directly into the camera, that you realize you have no idea how to do that.

I was prepared for the marathon of finishing a book. What I wasn’t ready for was having someone approach me just as I crossed the finish line, and whisper, “Okay, now the real work begins.”

Anne Helen Petersen recently wrote an essay about the struggles of selling the books we’ve worked so hard to create (she describes it, brilliantly, as “the stress of the bourgeois”). How we must straddle a line between the self-promotional and monomaniacal. Every word resonated with me, but even as I saw that other writers found themselves grappling with the same self-indulgent frustrations and self-doubt I felt, I scrutinized their press appearances, I enviously eyed their book tour schedules. How does she know Gillian Anderson? I whispered. There was no answer.

I suppose I thought that realizing my dreams would make the insecurities vanish, and I’d walk onto the set as relaxed and luminous as Gwyneth after a cleanse (which, based on my understanding of Gwyneth’s habits, is a state she is perpetually in). The truth is that they stay with you. Even if you are happy with your book, you will still walk the earth a haunted woman. Because you are a writer. The neurosis comes with the territory.

So I smile and toss my hair. I hold my arms so you can’t see the sweat stains. I trudge along, clutching the stitch in my side, and I pray that you don’t notice that in this neverending race, I’m not much of a runner.

All Over The Place, Book, Book Publishing