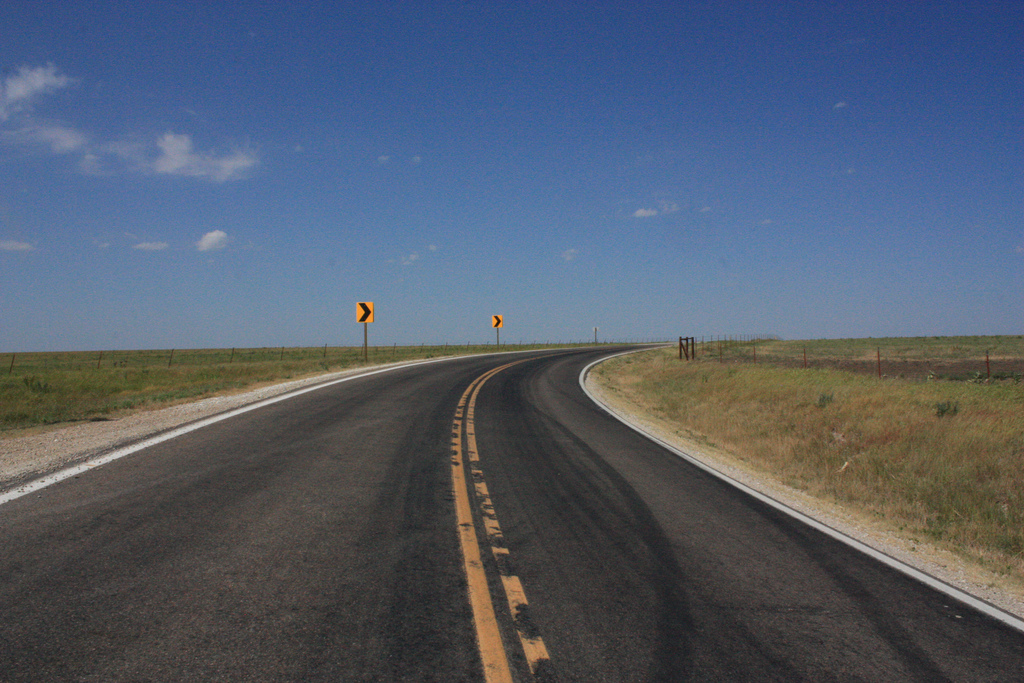 I was doing a radio spot a few weeks ago and the interviewer noted that my blog and my Twitter feed had become increasingly political in recent months. I laughed and noted that the same was true for nearly everyone I knew. Over the course of a year, I went from tweeting things like this:

THIS IS A PHOTO OF A LEMUR WITH A CUPCAKE.

I AM GOING TO BE SCREAMING IN ALL CAPS FOR THE REST OF MY LIFE NOW. https://t.co/5Kc4OTI1hl

Has anyone tried convincing the Republican party that the earth is an unborn fetus?

After November, I watched as comedians and travel writers and marketers and people with no professional ties to the political world began to make their views known. Instead of using Twitter to make customer service complaints, we now wrote about the demise of the republic, the curtailing of women’s rights, the death of the ACA.

I decided long ago that I would not keep my radical world views (which can be succinctly summed up as “cupcakes and healthcare for all”) a secret. When people tell me that they want to keep their online personas apolitical to avoid attracting haters, I nod sympathetically and tell them that the haters will find their way to their site, regardless. Even in the early days of The Everywhereist I got detailed, graphic threats, a rather remarkable response to a blog about travel and pastries. It does not matter what you write about. There will always be dipshits.

Add to this the inevitable comments from people who demanded, in no uncertain terms, that I “stay in my lane.”

Stay in my lane? https://t.co/cvzCTp79XQ

(Yashar Ali is, for the record, a political writer. Politics is actually his lane.)

This is the go-to response for people who don’t want to debate you on ideas they disagree with (and believe me, they do disagree – no one in the history of time has ever agreed with someone’s viewpoint and then gotten angry because it was off-topic), but want to silence you nonetheless. The result is condescending and commanding. It cuts swiftly.

There is so much implied in these few short words: an implication that they are doing you a favor listening to you in the first place, and you are somehow indebted to them. And the pervasive notion that as a travel blogger (or an actress, or musician, or a woman) we should only write about those narrow topics. Our opinions and our thoughts beyond that realm – especially those opinions or thoughts that are unseemly or disagreeable – will not be tolerated. 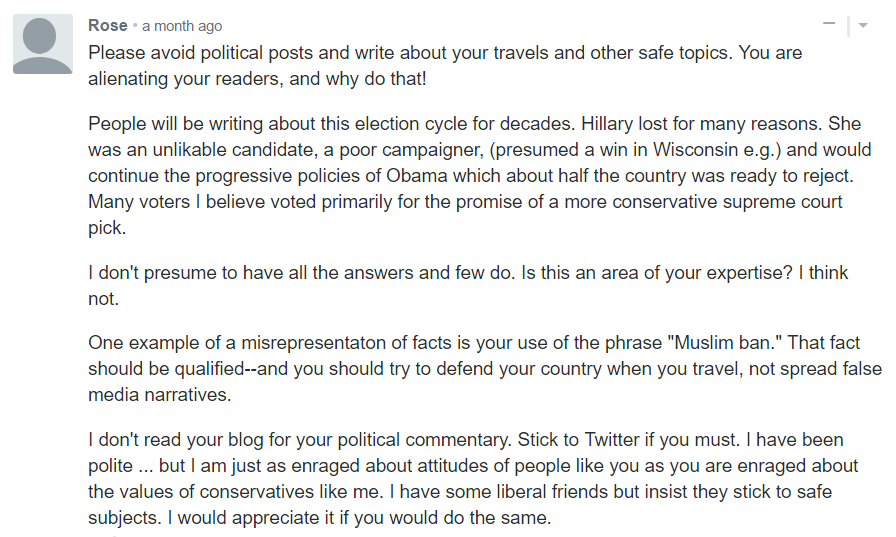 For those whose livelihoods are tied to their likability (and many fall into this category) this is a terrifying threat. For me, it’s a rather useless one. My blog and my tweets are utterly free. And yes, I’ve heard from people who have told me that they will not buy my book because of my political views. I have trouble imagining they’d have bought my book anyway.

The margins on books are pretty small if you go the traditional publishing route – “There goes that pack of gum,” I said, and Rand and I had a jaded laugh about it all, one born of the privilege of being able to not give a fuck. As a friend told me after the election, “You can express your rage. I can’t. My job is on the line if I do.”

But regardless of the efficacy of the threat, those that make it neglect one crucial truth: politics does not exist in a vacuum. How do we turn a blind eye when children we love are accused of being terrorists on the playground because they aren’t white? Or when loved ones are attacked when walking down the street? As David Brooks noted, ignoring politics is a luxury of the well-governed. And that is not the world in which we presently. 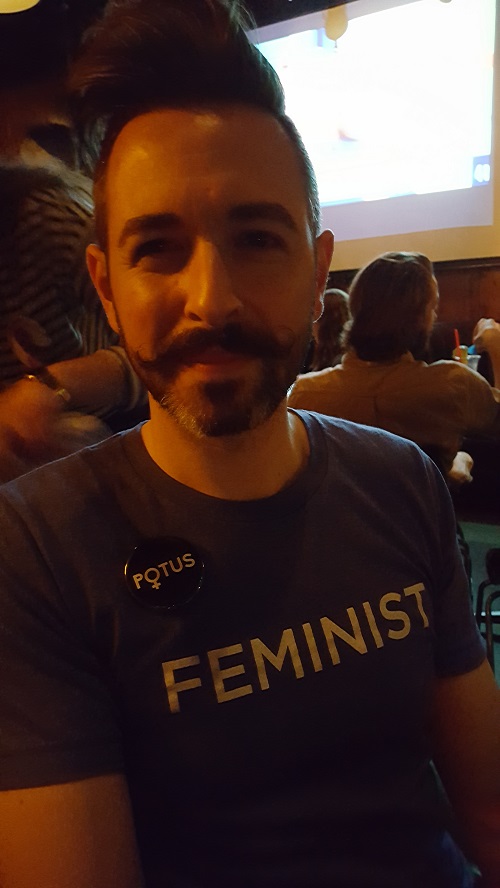 My beloved, on Election night, after someone spat on him. Later, a Trump supporter told him to get ready for the gas chamber.

The President is a former reality TV star. He has appointed unqualified and inexperienced people to head departments they barely understand. To say that we must stay in our lanes in defense of people who have refused to stay in theirs (with terrifying consequences) is myopic and hypocritical. To dismiss someone’s views as illegitimate or unwanted because they are an actress or a musician or a travel writer is to tell them that they have no voice in matters that impact their own lives.

Some people want a reprieve from political talk. I’m sympathetic to that. I’ve vowed to take some time off Twitter every week for the sake of my own sanity.

I’m going to start making Tues/Thurs Twitter free days. If I miss it I’ll just scream “DRINK BLEACH YOU C#NT” into a mirror.

We have the right to limit our own exposure to these issues when it becomes overwhelming. But to demand that people refrain from discussing it because it upsets us is to demand that someone else not eat cake because we’re on a diet. I would like my Twitter feed to resume its usual course of centering around cake and Jeff Goldblum.

Found a piece of cupcake on the floor. Picked it up. Ate it without hesitation.

Tweeting so I can now feel the shame that eluded me before.

And maybe one day it will. But I’ll be perfectly honest: this blog will never occupy one lane. It never really did, even before the election. You can’t write about travel without writing about history and politics. I’ve discussed the Khmer Rouge, the Troubles in Ireland, the revisionist retelling of slavery I’ve encountered in the American South. I was recently scolded for “being political” on this post about New Mexico. The only thing obliquely political in the entire post is when I noted that it is one of the poorest states in American. THIS IS A FACTUAL STATEMENT ABOUT NEW MEXICO and I was told not to make it on A POST ABOUT NEW MEXICO.

But even outside of travel, there are few facets of human existence that aren’t being influenced by the current regime. In the past, I’ve written about my brain tumor – which, for those of you who are paying attention to healthcare debate in this country, is a hell of a pre-existing condition. If the GOP repeals Obamacare protections, it is entirely likely that my husband and I will go bankrupt if my tumor returns (brain surgeries cost about a quarter of a million dollars, not including follow-up care, MRIs, or prescriptions). I get text messages from friends who are rushing to get IUDs because they’re worried that they won’t be able to get birth control after a repeal. Rand tells me that he’s getting emails from colleagues who fear that they won’t be able to get into the country because they were born in the Middle East.

Believe me, I’d like to forget about all of that for a while. But that’s not a possibility.

Politics does not stick to one lane. It veers across the highway, crashing into ambulances and school buses and running over the occasional bunny. Sometimes it jumps the railing and comes careening into our homes. So don’t ask me to stay in my lane. Because there are no lanes anymore.