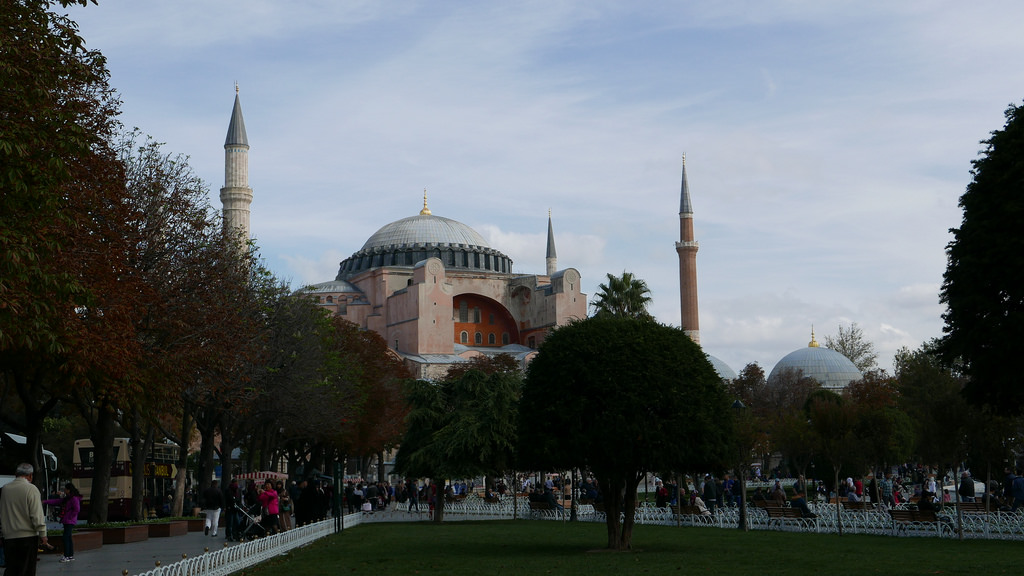 Islamophobia has, understandably, been on my mind a lot lately. I’ve been watching as it slowly spreads across America – perhaps it’s always been around, just under the surface, but in recent months, with the election of our new President, it’s come to a rolling boil. He has villified Americans and foreigners alike, accused the Muslim community of sheltering radicalized terrorists, and signed an arbitrary Muslim ban on immigrants and visitors to America. (Now in its second iteration, after the first one was struck down on grounds it was unconstitutional).

The executive order is the manifestation of a multitude of shitty ideas. That all Muslims are terrorists. That denying refugees (many of them fleeing those exact terrorist groups we fear) into the United States will somehow make us safer. That Islam itself is the problem. And that somehow becoming isolationist will protect us.

It tries to draw a line of demarcation between “us” and “them.” 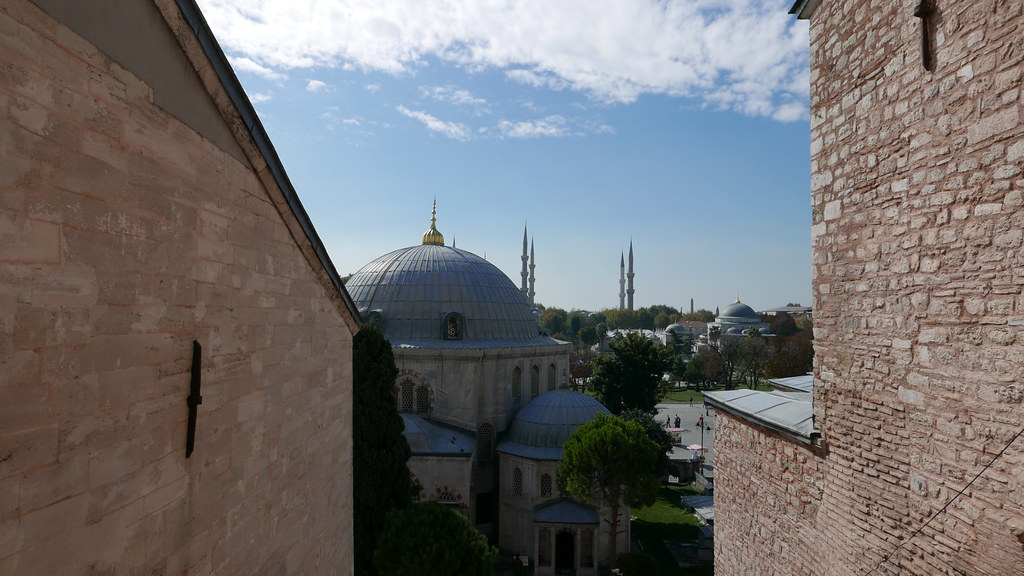 Turkey was my first and only trip to a Muslim country. And I wondered if this line of demarcation – albeit a slightly different version – existed there as well. I particularly wondered if we would notice it more markedly as Americans, and, in Rand’s case, as a Jew.

Somewhat surprisingly, it did not, despite the fact that people rather instantly identified us as Jews (which I found jarring – a very, very small percentage of my ancestry is Jewish). Without preamble, the owner of a sweet shop walked up and offered me candies noting that they were Kosher; a tour guide looked at me for a moment, asked where my family was from, and the said, “You’re Ashkenazi, yes?”

I was dumbfounded. He explained that a large percentage of the population in Turkey had Jewish ancestry. New research suggests that Ashkenazi Jews descended from here. And while many Jews are leaving the country for Israel or America, it soon became apparent to me that the lines between “us” and “them” are greatly blurred in Turkey.

No where was this better captured than the Hagia Sophia. 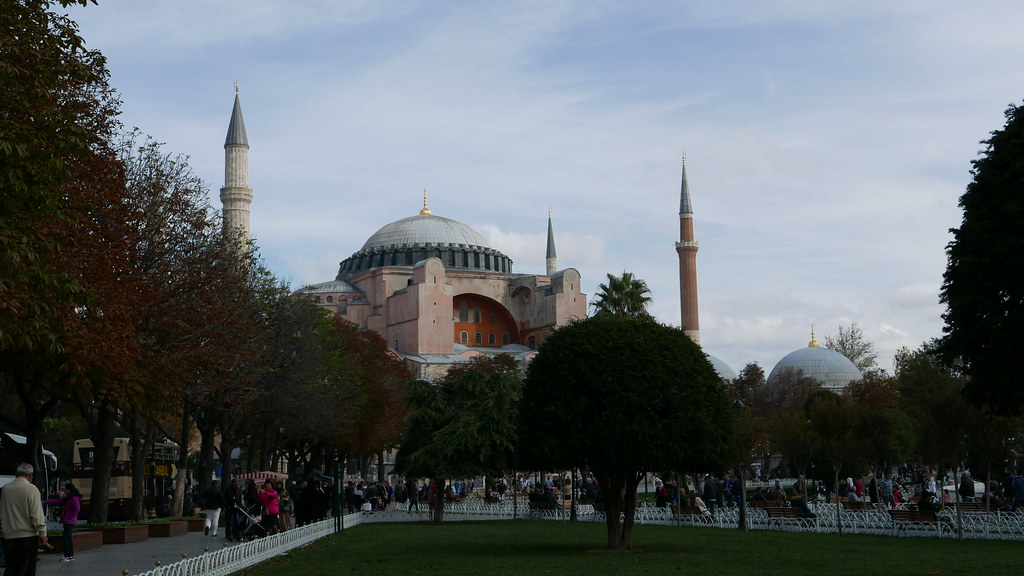 No single religion can lay claim to it. It was originally built in 537 AD as a Greek Orthodox Cathedral, and remained so for nearly 900 years, despite a brief 50-year stint in the 13th century during which is was converted to a Roman Catholic church. It became a mosque until 1453 (after Constantinople fell at the hands of Sultan Mehmet II) and remained as such until the 1930s, after which is was turned into a museum. (In Turkish, the name is Ayasofya, a far more phonetic spelling of its name.)

Over the centuries it has been decimated by earthquakes, desecrated by Crusaders, pillaged by invaders, looted by the Ottomans. The copper roof cracked. The interior fell into disrepair and was damaged by moisture and decades of neglect. It was engulfed by fire and rebuilt, twice. Today it is in a state of restoration, one with an indeterminable end date. The building, majestic and massive, has been through so many incarnations that it’s impossible to tie it to one religion. 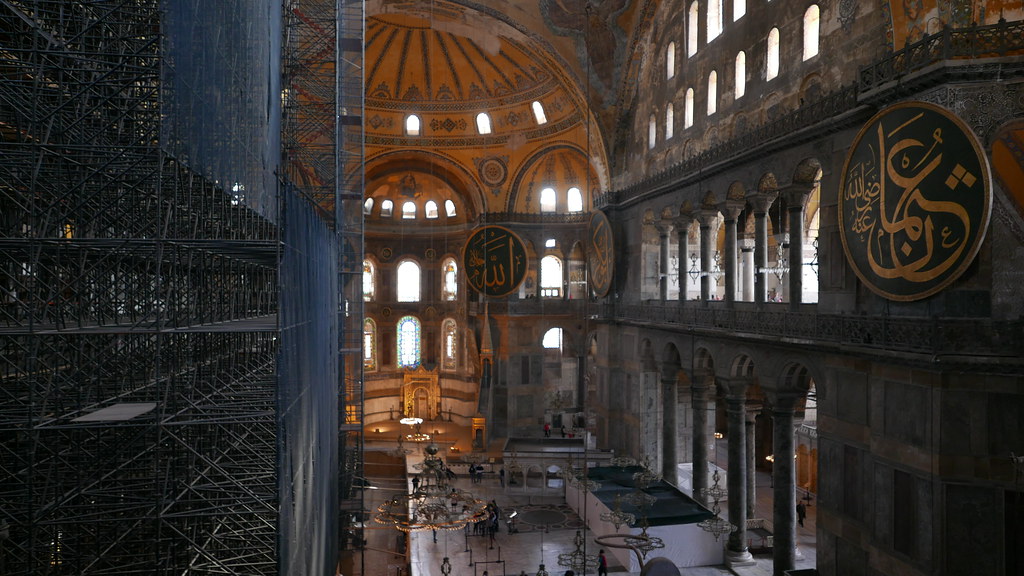 I suspect this concept resonated with Rand. He identifies as atheist, but he’s Jewish by ethnicity, and when we first met and he told me he loved Christmas so we put a Star of David on top of our tree. 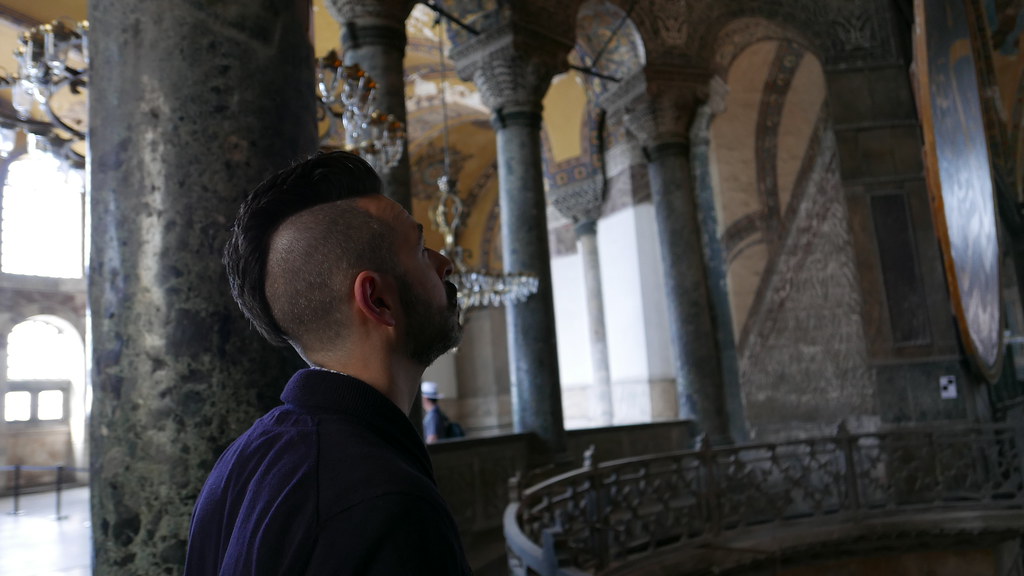 Entering the Hagia Sophia, he was quiet and wide-eyed. When he finally spoke, it was to tell me that this was one of the most remarkable places he had ever seen.

The building’s mosaics harken back to its time as a basilica. There were saints and apostles, the virgin Mary and the baby Jesus. 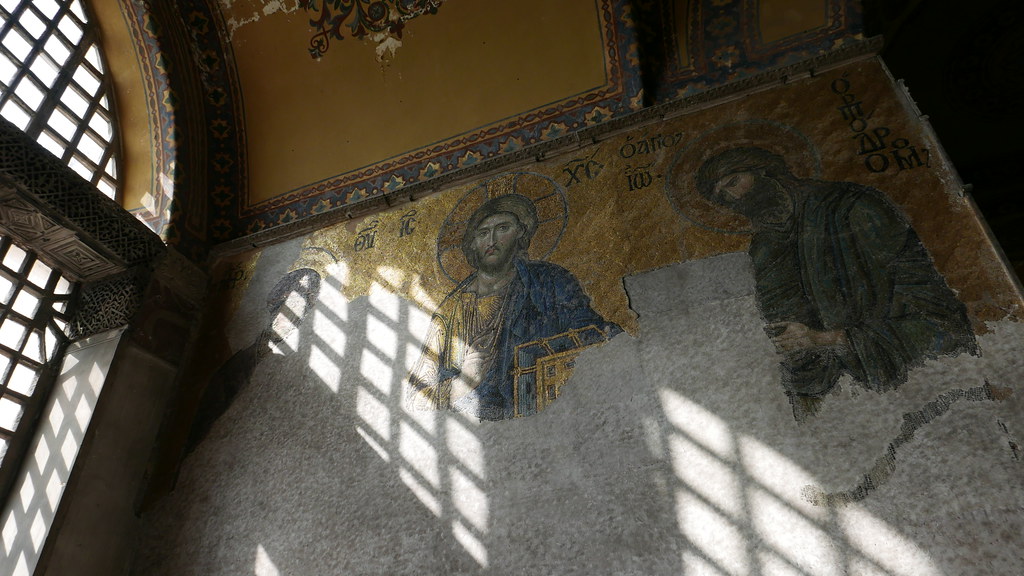 Architectural details that looked distinctly like those I’d seen in Catholic churches across Europe. 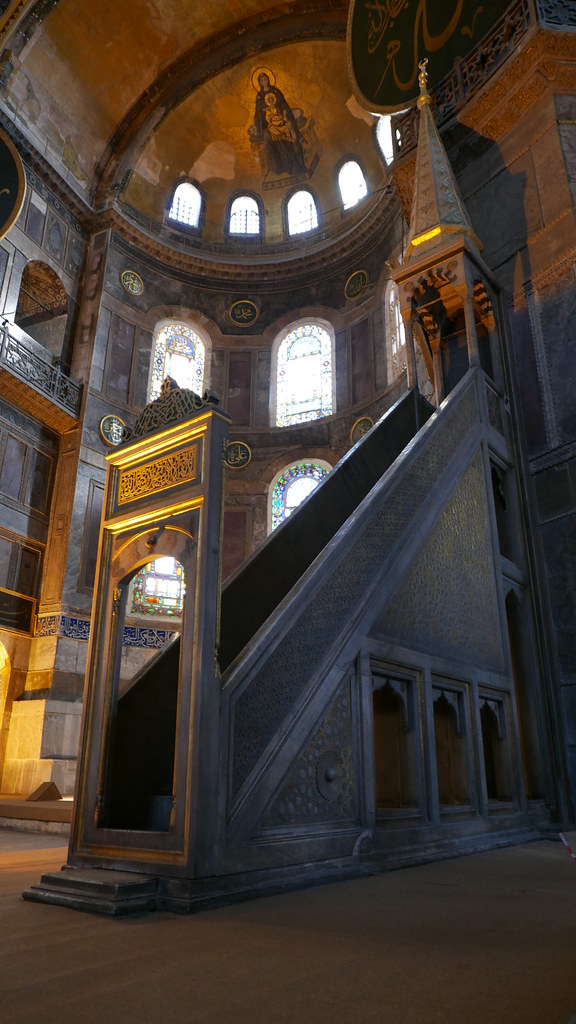 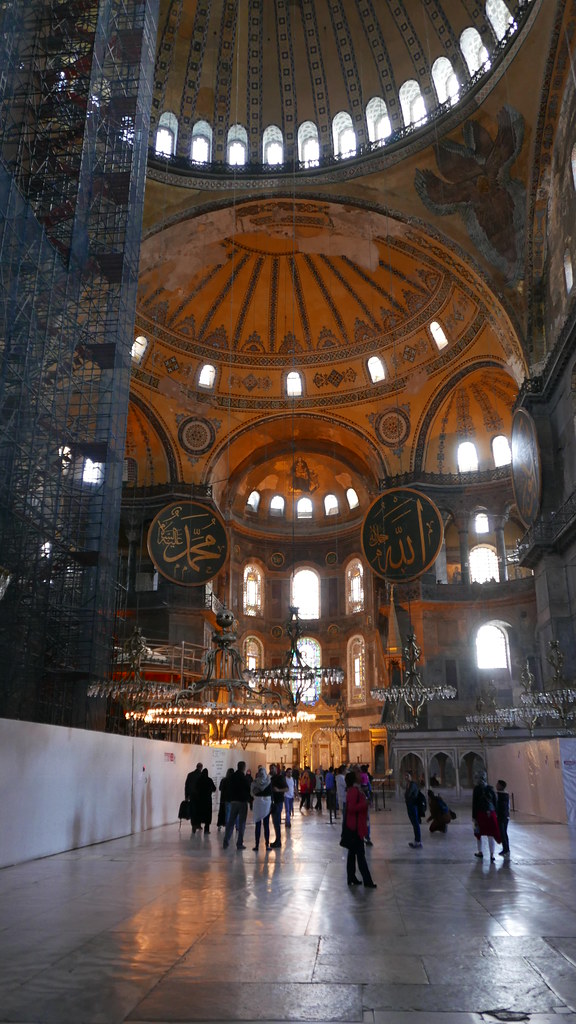 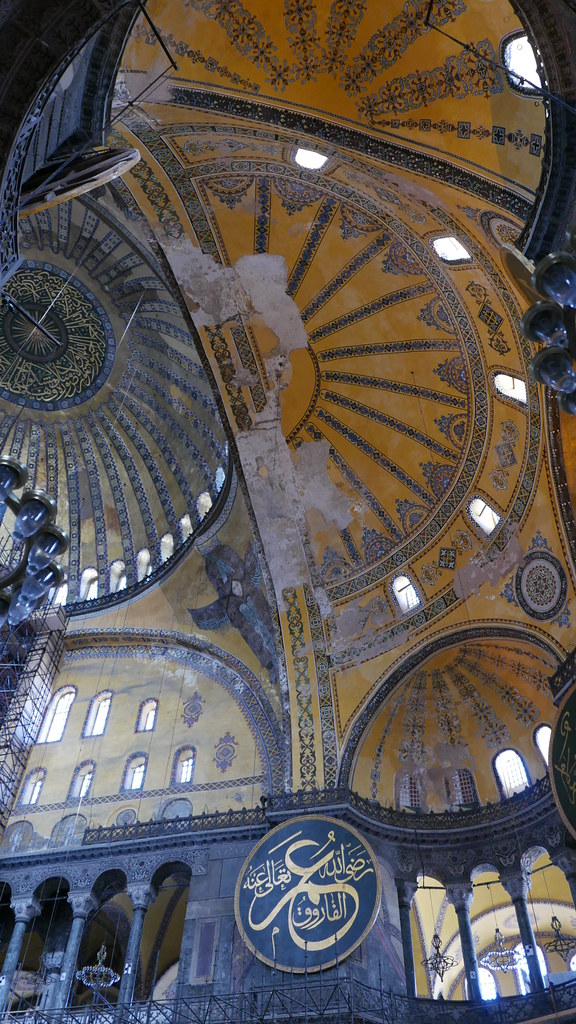 Did I mention I’m a recovering Catholic? There is something strangely familiar about every church I walk into. Every representation of a Savior I inherited, or a saint whose name I could never keep straight, is like an old friend. One who I don’t call often enough, because we really don’t see eye-to-eye on a couple of things and have grown apart. 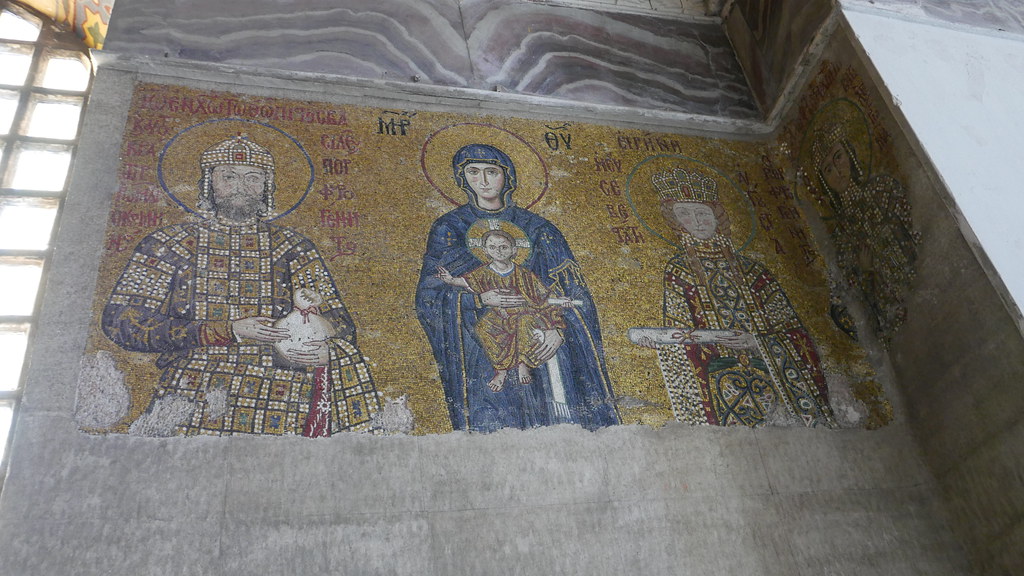 Alongside these mosaics are giants disks with Islamic calligraphy written on them – erected when the building became a mosque. 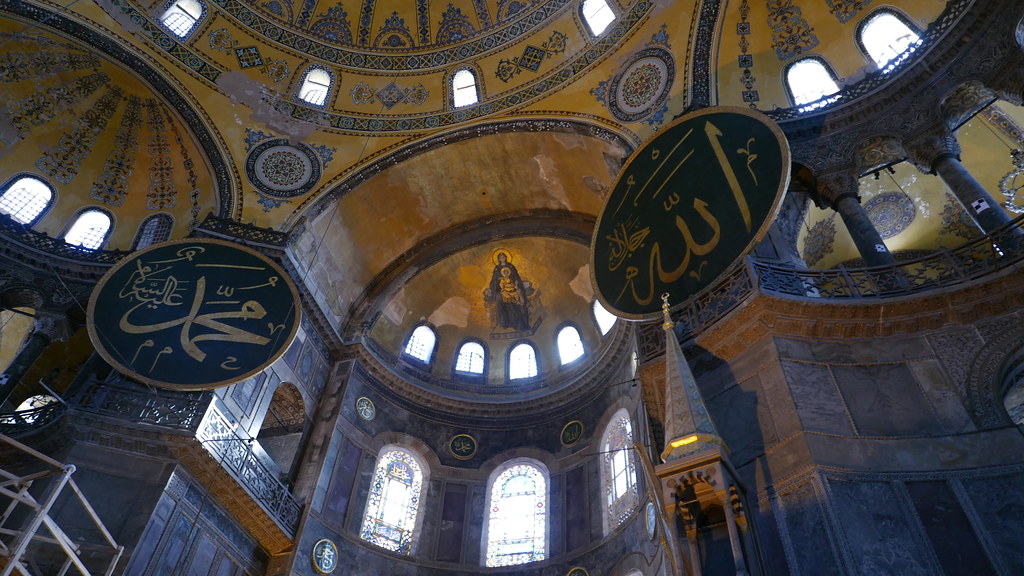 This was perhaps my favorite feature of the Hagia Sophia – the positioning of the disks alongside the Christian motifs seemed to acknowledge that its new identity did not erase its old one. 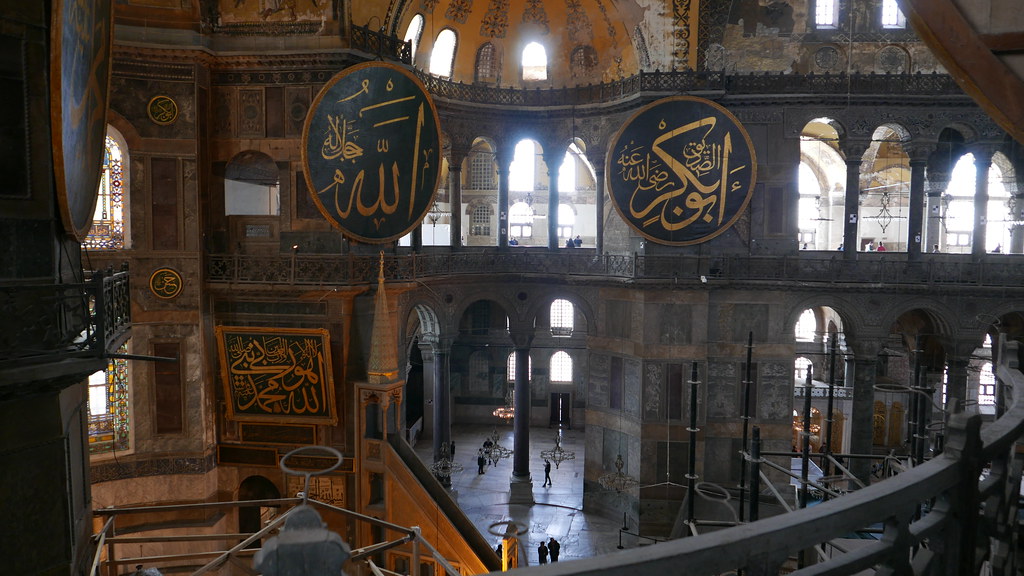 We all exist together.

There were other points of familiarity in the massive Cathedral. The six-pointed star (at the top of the chandelier) is a common symbol of Judaism, but does not exclusively belong to that faith. We saw it repeated time and again across mosques in Turkey, Rand pointing it out to me each time. 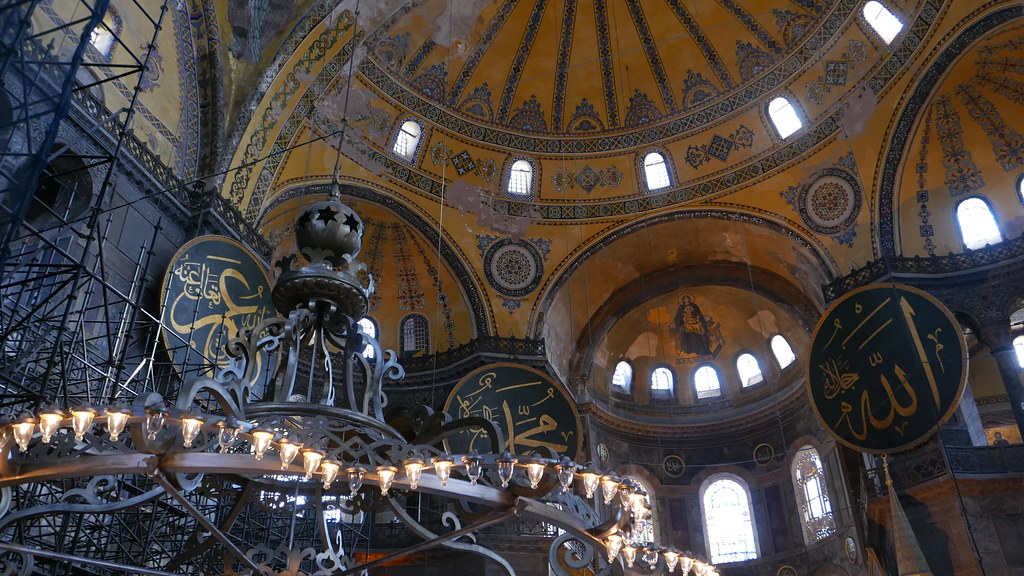 Today, different groups each have their designs on the Hagia Sophia. Some say that it should be be restored to its original function as a Christian Church. Others argue that it should be a Mosque. In the meantime, there is a small space designated as a prayer room for the museum’s Christian and Muslim staff. Twice a day the call to prayer rings out from the minarets of the Hagia Sophia. But because it is a museum, visitors may enter without removing their shoes, and women are not required to cover their hair, as we did in the mosques throughout the city.

In the present, the Museum straddles the lines of demarcation that so many are trying to draw in indelible ink. There is no us or them, there is simply a long and storied history written in calligraphy and mosaic.