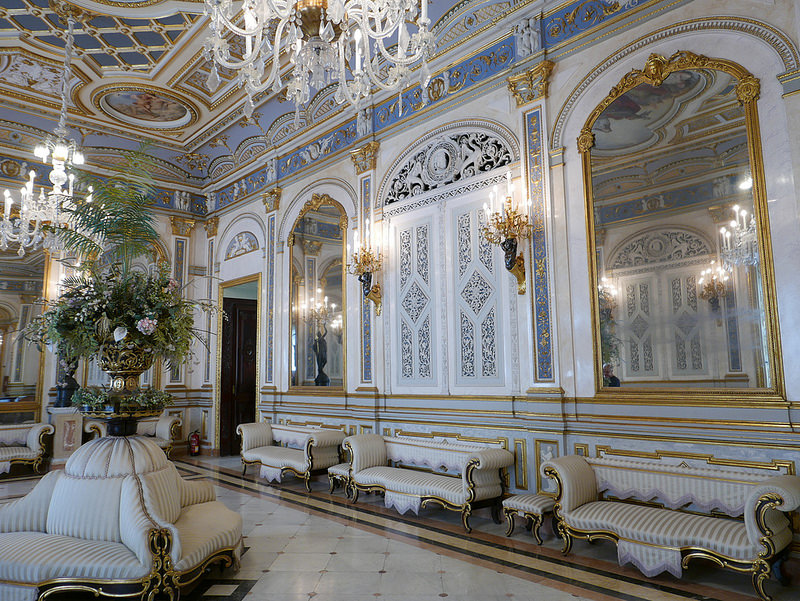 In the center of Valencia sits the Palacio del Marqués de Dos Agüas (the Palace of the Marquis of … Two Waters? Wait, is that right? I’m basing this on my high school Spanish, which also inadvertently caused me to proposition someone when I was 16). The building – an ornate and sort of gaudy mansion that screams “THIS IS WHAT RICH PEOPLE LIKED A LONG TIME AGO” is on a busy corner near the Central Market, and is also home to the National Ceramics Museum (which I highly recommend, but I might be a bit of nutter when it comes to ceramic arts). Much of the inside has been restored to its earlier grandeur, and it’s something to behold.

But while the interior is impressive, credit must also be paid to the facade of the building, which is one of those things that sort of stops you in your tracks. 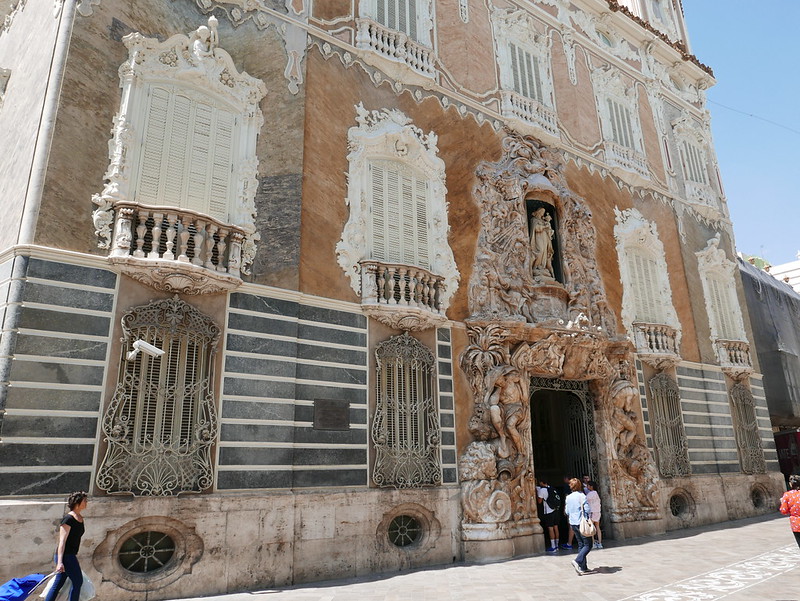 Someone used to live here.

The Virgin Mary stands in the middle, surrounded by two rivers (the eponymous “two waters” of the family’s name – whoo-hoo! My pitiful Spanish wasn’t that far off), and the entire thing is ornate and breathtaking. This was someone’s private home. The family that lived there was largely influential at the time – they owned the lavish Dos Agüas estate outside of the city, were noisily wealthy, and were apparently very, very Catholic (but this was 1700s Spain, so really, who wasn’t?). 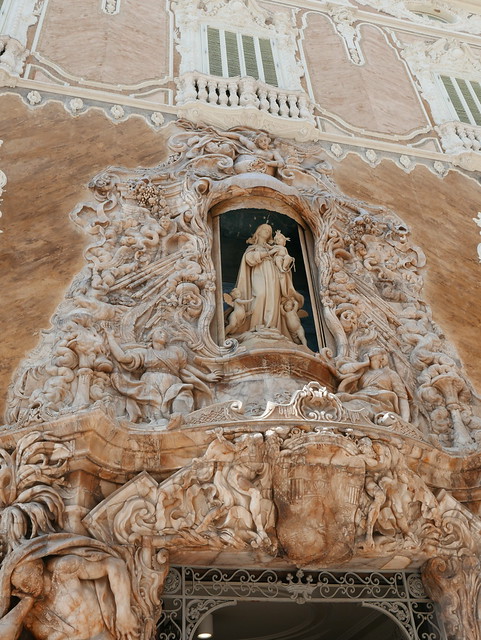 Sure, you love Jesus, but do you love him enough to have him rendered in plaster on your home?

The roads surrounding it are so narrow and the palace is so snugly nestled in that it was impossible to get a proper photo of it from the outside with my camera. Let us put aside the fact that picture taking is not my forte, anyway.

And while the magnificent facade and many of the home’s other elements were added more recently (one rather judgmental placard inside described the renovations as “mutilations”, which I found altogether delightful), the palace itself dates back to the 15th century. Looking up from the ground floor, it’s built in a giant O-shape, around a central interior courtyard. 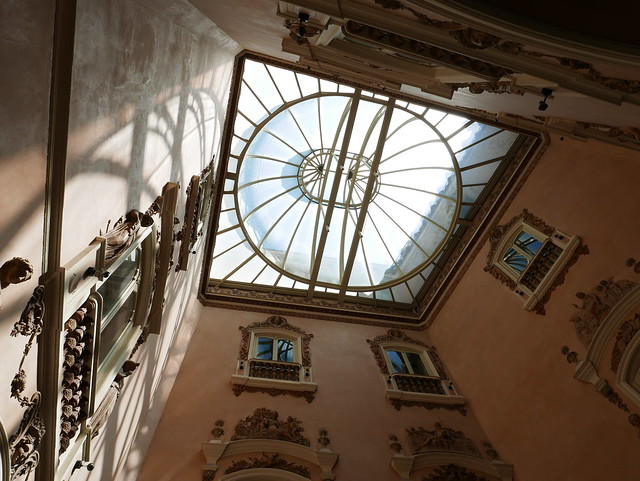 Well, you’ll forgive me if I sort of lost track after that of what was what. The thing about the homes of rich people from long ago is that there are so many damn rooms dedicated to all sorts of things that make no sense to me – I live in Seattle where bedrooms are tiny and often have showers in the middle of them. But in palaces like this one, there are grand ballrooms and parlors and drawing rooms and  sitting rooms and farting rooms and rooms made entirely of taffy. There was a massive staircase that was literally twice as wide as my first apartment, over which hung a chandelier the size of a Volkswagen. 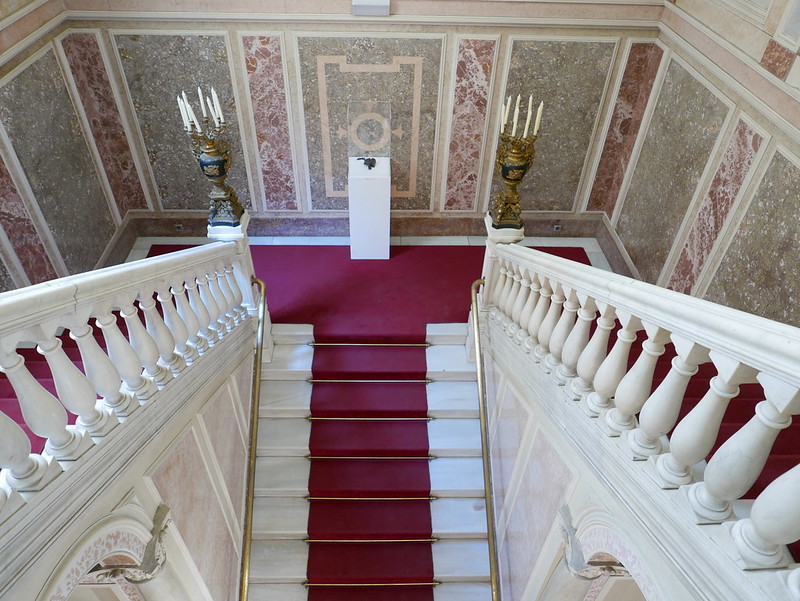 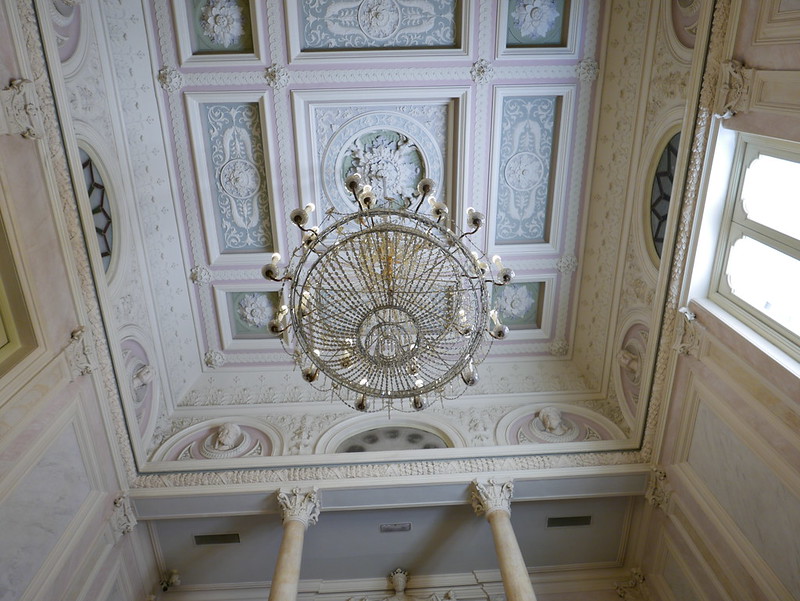 This room housed a well (I think, anyway. Christ, I’m a terrible travel writer. I barely pay attention to anything.) 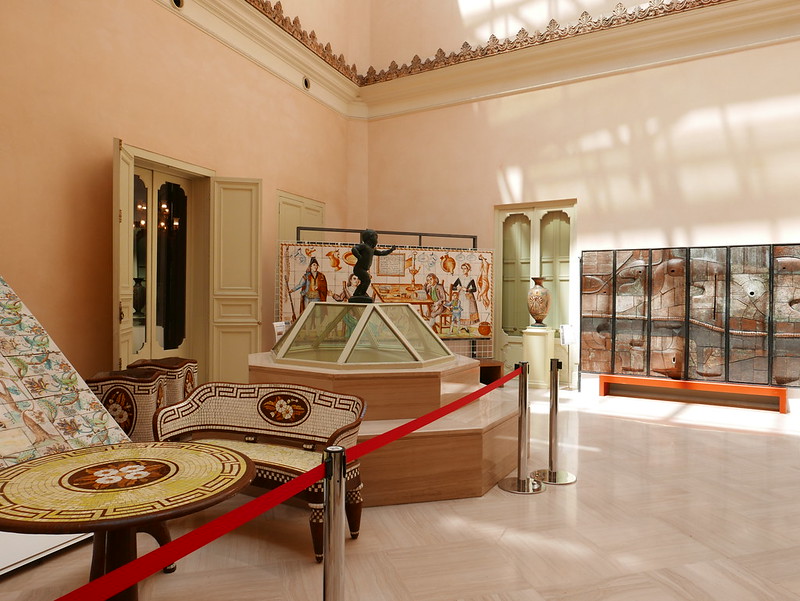 Now it’s part of the Ceramics museum (also housed inside the palace) and is home to this sassy little fella: 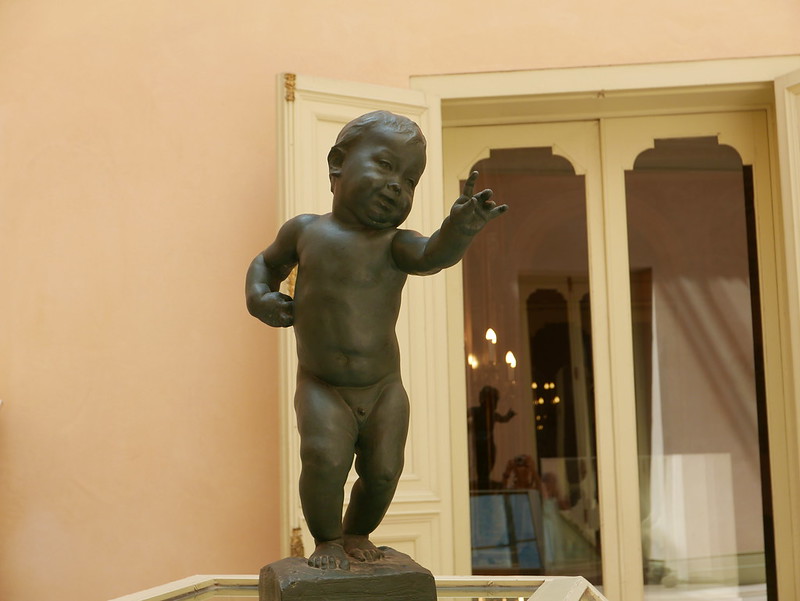 And this was … a room filled with chairs? With maybe Dante on the ceiling? 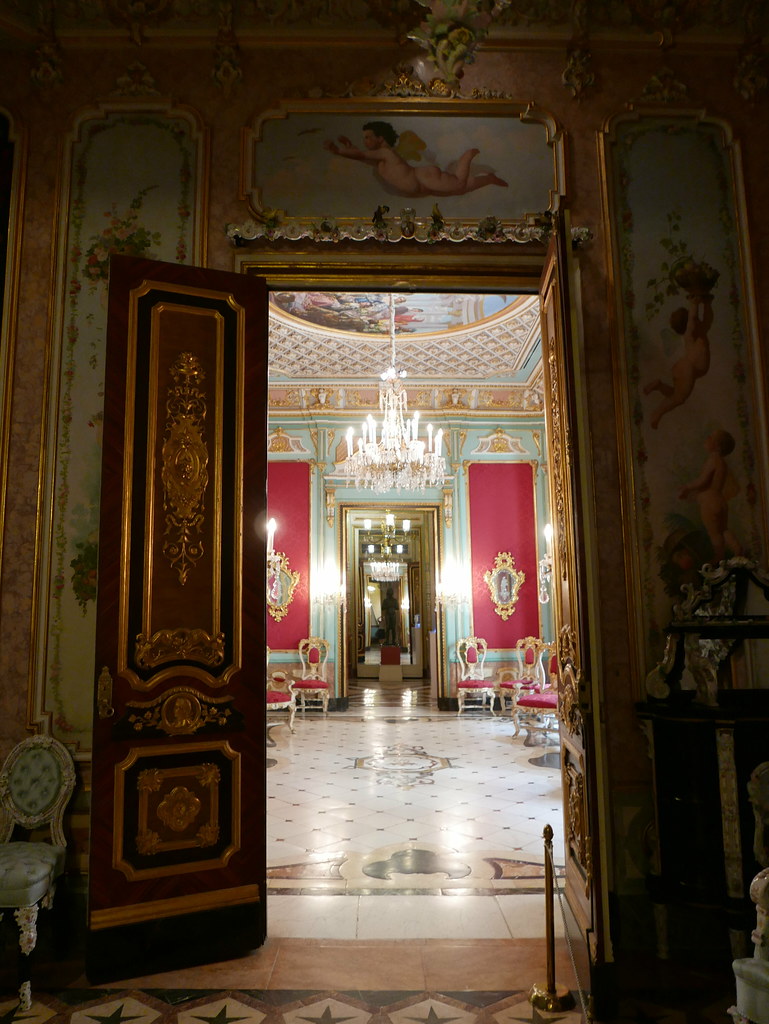 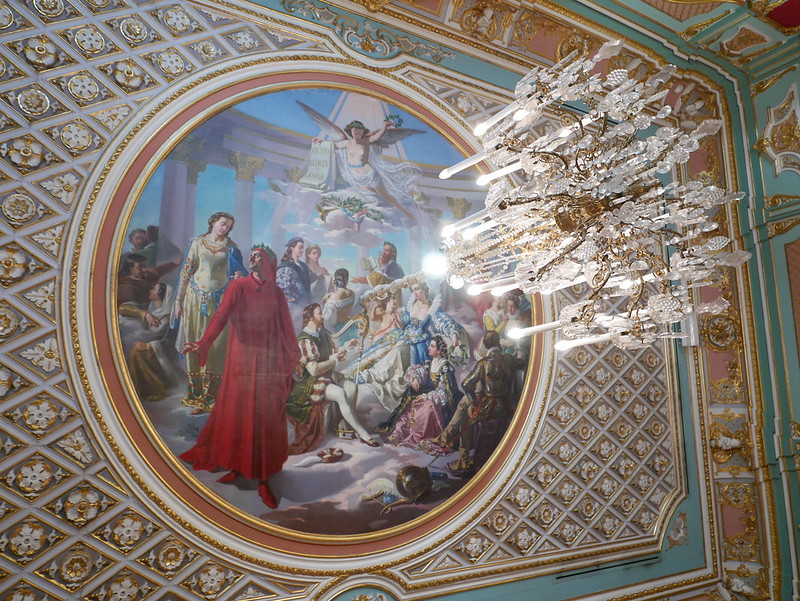 I told Rand we should totally do something like this in the master bathroom and he reminded me that we’re renters and also that no one wants to look at Dante while pooping.

(Update: I looked this up, and, indeed, that is Dante with his beloved Beatrice. It’s by José Brel depicting “Genius, Glory and Love” and was painted in 1866. It decorates the ceiling of The Red Room and it seems to have been, in fact, a sitting room. Hence the chairs.)

This is not, I should note, how things would go down if I suddenly found myself obscenely wealthy. I would decorate a home much as they did in the show Silver Spoons – the epitome of opulence for me is one envisioned by a child in the 1980s – arcade games in the living room, giant stuffed animals, a miniature train that runs throughout, and gaudy wood paneling everywhere. And with either Alfonso Ribeiro or Jason Bateman stopping by.

I don’t want to sit in a gilded room and stare up at dead Italian poets who spent way too much time waxing about hell.

But I am fascinated by the gaudiness that heralded the upper class in centuries earlier. Of filigreed fixtures and elaborately decorated frescoes whose sole purpose beyond the aesthetic was to help separate people into social strata. And when one considers that the wealthiest people of long ago don’t quite live as well as many of us do today (I once saw it brilliantly put thusly: “Everyone wants a king’s land, but what about his lice?”) it’s all sort of absurd.

“Enjoy your gilded-everything, jerks! I’m not going to die from a cavity!”

This was the Marquis’ bedroom. I’m always amazed by the size of beds in old palaces (weirdly, I go to a lot of them, I guess), because they’re so small. I think that this was often because of heat- the bigger the bed, the harder it was to keep warm. So smaller is desirable, and if it’s draped with gobs of expensive French fabric, all the better. 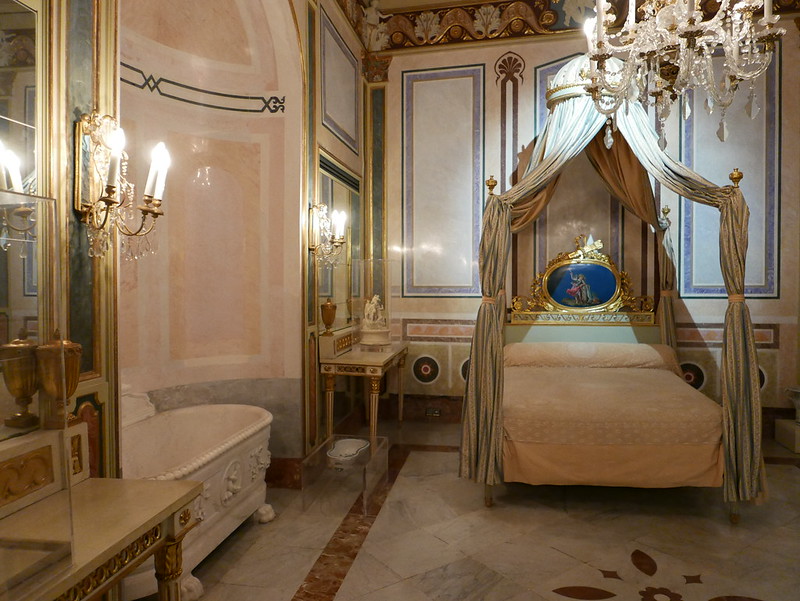 They have rooms made entirely of marble, but I have cat gifs on demand, so who’s the marquis now, eh?

The place is so elaborate and sparkly – like an entire home made of those fancy Renaissance paintings in the wing of the museum I always skip. 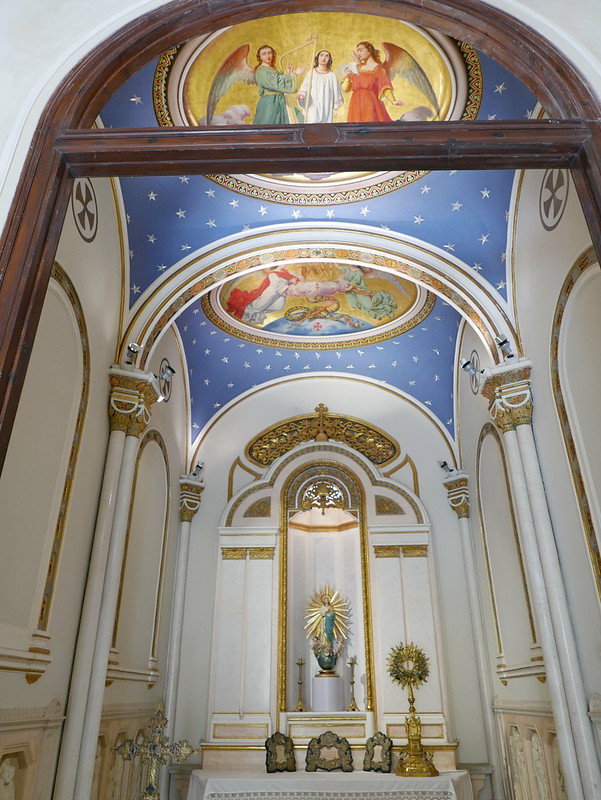 This was the most interesting room in the palace – it was where the Marquis would entertain visitors. 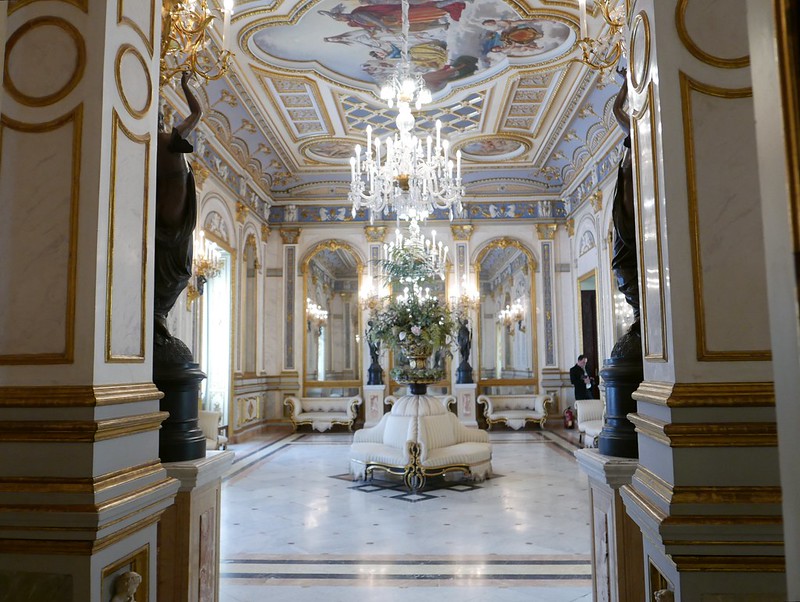 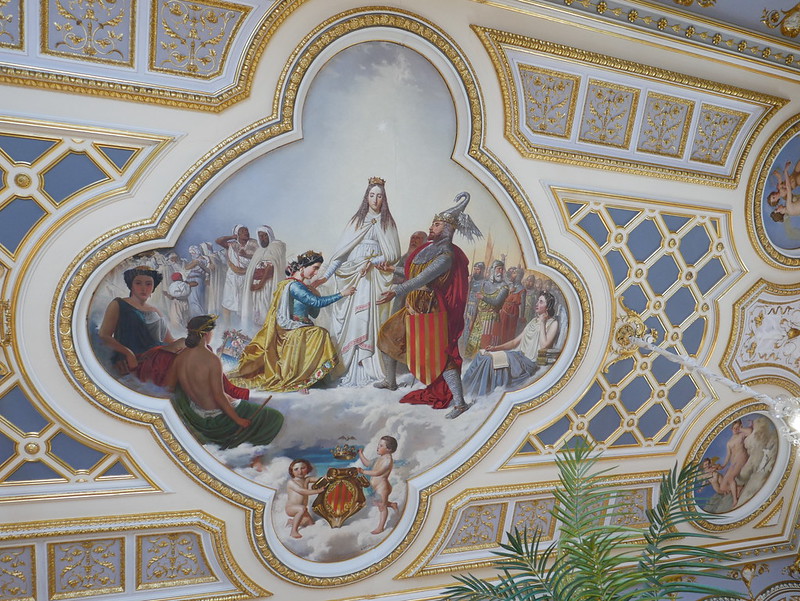 This scene is supposed to represent the city of Valencia (the woman at left) kneeling before Jaime I while a figure representing Christianity looks on. But I like to call it “Snow White Proposes to the Swan King.” 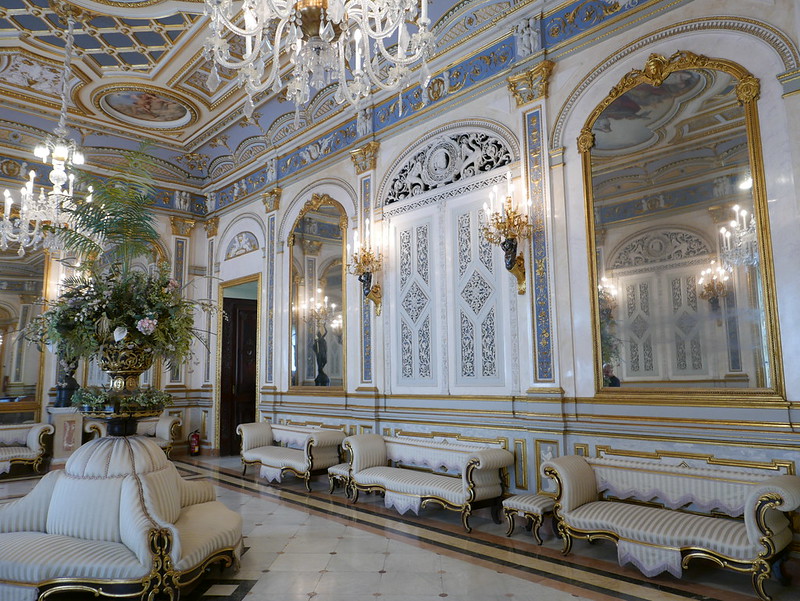 A placard in the room explained that it was here that Marquis and his guests would enjoy music played by an orchestra which was hidden from view behind a wall. It took me forever to figure it out where. 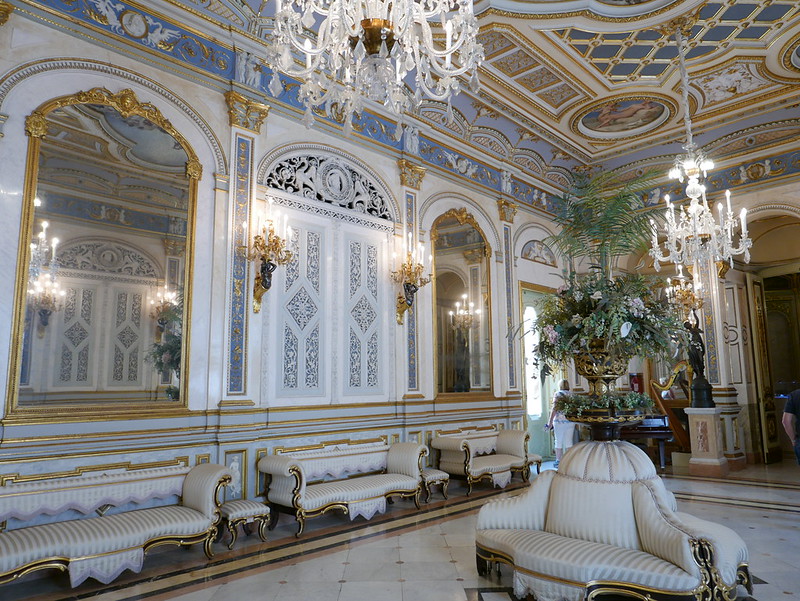 After pacing the room a few times I finally realized where they had been hidden. Here: 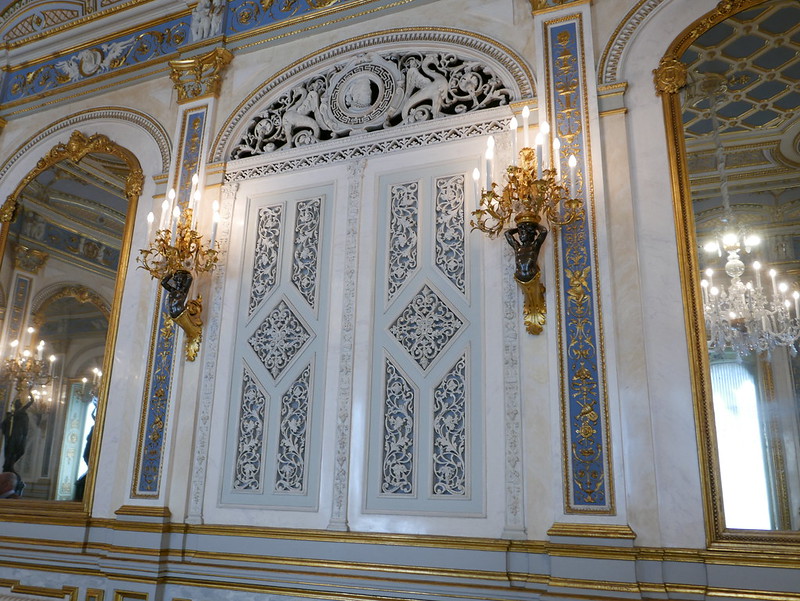 THAT IS WHAT HAPPENS WHEN SPOTIFY WON’T BE INVENTED FOR ANOTHER 300 YEARS. You start doing crazy shit like shoving musicians in your crawl space. Which is sort of barbaric.

Apparently the gilded relief around the cabinet – which depicted musical instruments – was a clue as to what was inside. 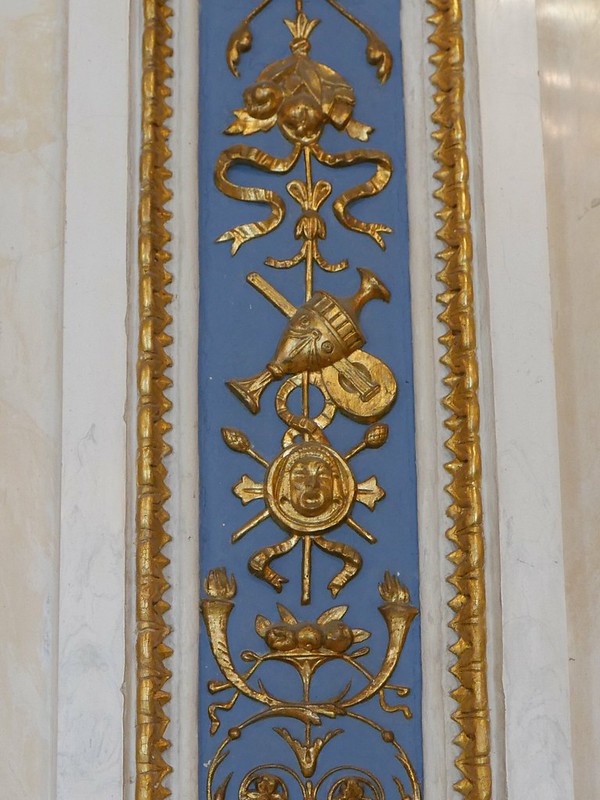 I realized maybe I’m not cut out for being obscenely wealthy and also for living centuries ago. I can’t stand gilded trims and I have qualms about shoving musicians into cabinets for hours at at time. Plus, I love penicillin and also my brain tumor would have killed me. So there’s a lot of reasons why the Palacio del Marqués de Dos Agüas wouldn’t really work for me. But it’s a pretty remarkable place to visit, to marvel at it from within and without, and then to take a moment to be incredibly, effusively grateful for the riches in your own life.