Posted in: Life at Home, Nothing to Do With Travel, Personal Essay

SPOILER: NOTHING GOOD WILL COME OF THIS.

Let’s talk about Saturday, or possibly Sunday. They sort of merge together when you refuse to put on pants and join the world of the bathed. My friend Jenny (her name has been changed so that this blog post can’t be used against me in court) was having a holiday party, and I was trying to decide whether or not to go. Rand has been swamped with a deadline (he’s working non-stop on his book, which I have tentatively titled Married to a She-Wolf: The Rand Fishkin Story but which is actually about business or something) so I’ve been attending most social events on my own, an admission which should be accompanied by ominous music.

Generally, I’m pretty okay with flying solo because I’m outgoing and my near-constant state of sobriety gives me a tiny leg up on the people who are downing straight rum but calling it “eggnog.” Plus, I’m sort of clueless so I generally don’t know when I’m making a fool of myself. Unless, like, it’s totally egregious.

Especially if by “glad” you mean “cringing for the next five days.”

This was my first foray out into the world after my dad had died, not counting when I went down to my mother’s house and we scried at each other for an hour (“scried” is my new cute portmanteau of scream and cried). I felt like the skin that comes in right after a scab has fallen off – new and pink and tender (and possibly prone to weeping so maybe we shouldn’t wear anything cute). By outward appearances I appeared normal, but was petrified that something would crack the facade and I’d start spewing snot and tears in front of a bunch of strangers, like some sort of feelings geyser. 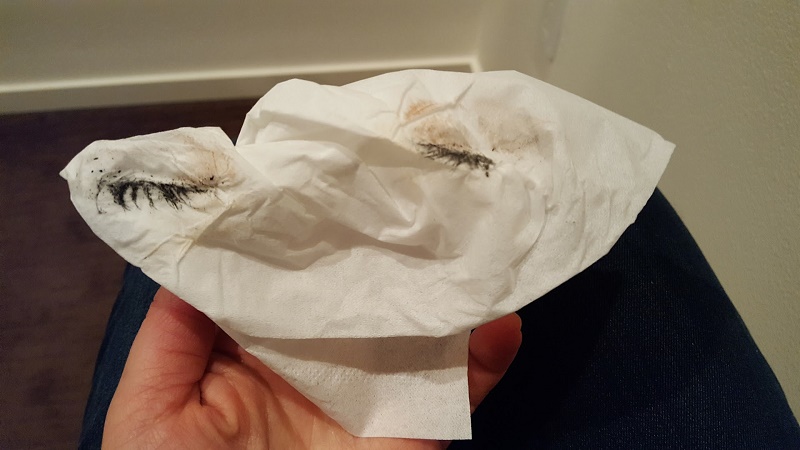 Rather remarkably, this is what my tissue looked like after crying one night last week.

Jenny’s friends turned out to be lovely. They all had their shit together – they were homeowners and people who remembered to vote in midterm elections. There was a cadre of surprisingly well-behaved non-boogery children in attendance, and only one tried to get drunk (more on that in a moment).

When I asked people what they did (which is a weird question, and one I can’t answer myself), absolutely no one said, “I’m an aspiring competitive hot dog eater”.

I started talking to a lovely and hip young couple, and at one point said,

“So how do you ladies know Jenny?”

Let’s talk about why this was a stupid thing to say.

So, yeah. I misgendered this gentleman. And he was totally cool about it, politely corrected me (explaining that he actually came to Seattle to transition), and that should have been it. But for some reason, I felt the need to apologize a thousand fucking times and THEN I KEPT BRINGING IT UP AWKWARDLY.

Him: So you live in Beacon Hill?

Me: No! Wrong hill! Hey, I misgendered you but you got my home address wrong so now we’re even, right?

(I actually said this. God help me. He just stared.)

At some point, I was just vomiting out words. “Pan-sexual” and “non-binary” and now I need to go live in a cave.

Also, he was adorable. He looked like Andrew McCarthy (yes, I told him this). So my record of making a fool of myself around hot people continues on, unbroken. HOORAY.

You’d think that this was it. This was the end of Geraldine’s disastrous outing, right? OF COURSE NOT.

I spent a large portion of the evening talking to a lovely young gay man, and when someone asked me how we knew each other, I said, “Oh, he’s my ex-husband.”

This was a joke.

It was not taken as a joke.

It was taken very, very seriously.

The woman I said it to then began telling me how awesome it was that we were friends post-divorce. And how she was attempting to do the same thing with her ex but it was difficult.

I figured my only option was to double down because (in case you haven’t been following along at home) I HAVE TERRIBLE JUDGEMENT. Thank god my gay fake ex-husband played along (some days I wonder how I ever let him get away). I explained that I only married him for his tushie, which I proceeded to slap. Then I watched mutely as a small child reached for a rum ball and did nothing to stop them because sometimes you need a drunk 10-year-old to take some of the pressure off of you, you know? At some point I blurted out to someone that my dad had died on Wednesday, so that was a fun icebreaker, too.

Did I mention I was stone-cold sober?

After that, I figured perhaps it was best to stay home for a while. If you follow me on Twitter, you may have noticed that my feed is a non-stop spew of liberal rage lately (spoiler: I’m a Democrat. Which means that I’ve been devastated for the last month and a half). So, I thought, “Instead of tweeting about how the world is a tire fire, I’ll talk about Christmas songs.”

NOTHING CAN GO WRONG IF I COMPLAIN ABOUT CHRISTMAS MUSIC, RIGHT? Everyone hates Christmas music.

Worse Christmas song – is it The Beach Boys or the Waitresses? Or are you now mad b/c you’ll have one stuck in your head all day?

And I received this reply:

That sad moment when your favorite travel blogger makes fun of your husband’s band……PS very sorry for your loss! https://t.co/DQ4yACXxuk

And I found myself thinking, “Please, dear god in heaven, let her husband be part of The Waitresses.” So, that’s the story of how I inadvertently insulted one of The Beach Boys.

After that, I decided that I was only going to leave my home for therapy appointments. But the last time I was at my therapist’s, I bumped into my friend’s husband who I hadn’t seen in ages, and as I left I shouted, “Say hi to your handsome husband for me.”

Which would have been fine except that I later found out that the two were getting divorced. I shouted “SAY HI TO YOUR HUSBAND FOR ME” to someone who was newly separated and – I realize now – on a date.

So, if any of you are concerned about your social interactions this holiday season, just remember that I’ve set the bar unimaginably low. You’ll be fine. Hey, by the way, I’ve meaning to ask, are you pregnant? It’s just that you sort of seem like you are, and that shirt makes it look like-

No? You aren’t? Okay, I could have sworn you were. That’s cool.

Essays, Life at Home, Nothing to Do With Travel