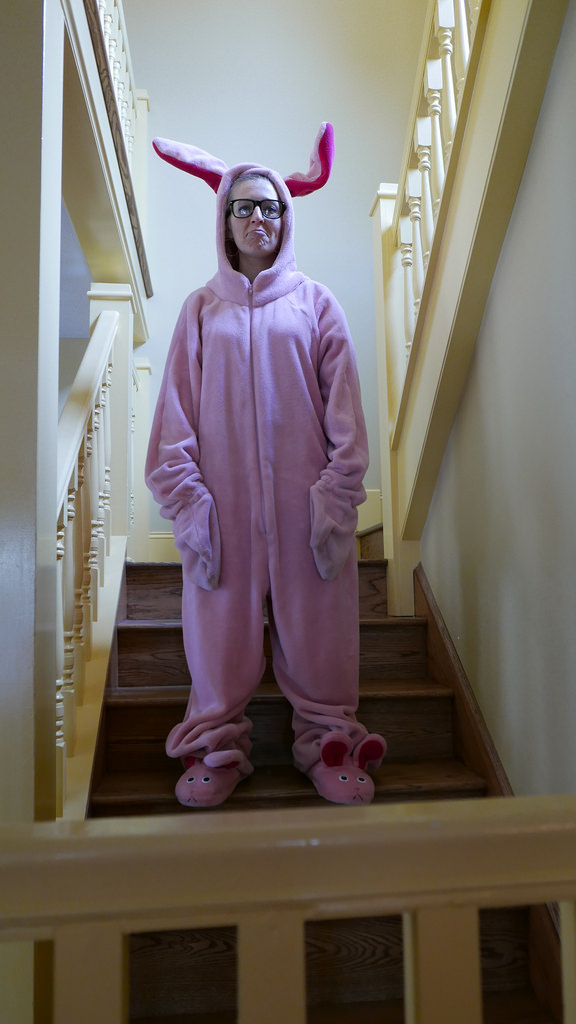 I know that a good story requires build-up before a big reveal, but I’ve never had the patience for that. While everyone else is sitting through the rising action, I’m screaming “GET TO THE CLIMAX,” which doesn’t always fly in the middle of a movie theater or wedding ceremony or bris. 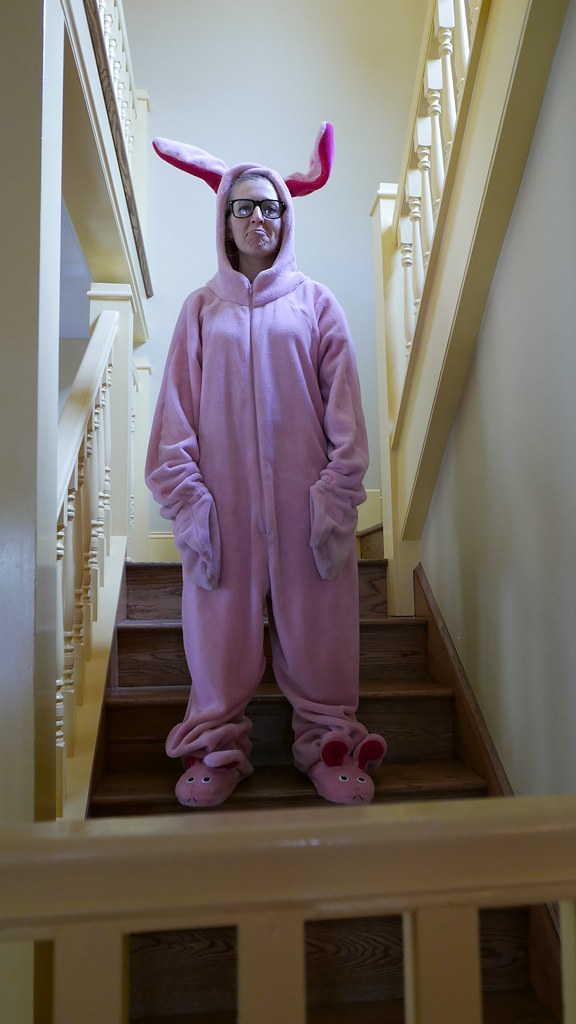 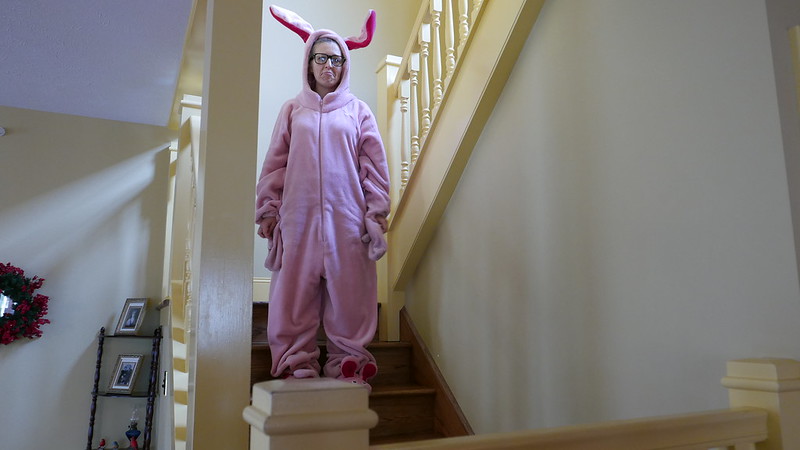 All of this happened during my birthday trip to Cleveland, Ohio, this past summer. Because nothing says “your mid-thirties are ending and 40 is lurking at the end of the road like a drifter about to kill you in your sleep” like a visit to a Midwest industrial town on a 100-degree day. For those of you who poo-poo Rand’s gift to me, I’ll quietly remind you that I’m a travel writer and if I go to Cleveland on my birthday then there is no way it’s not a good decision. I told Rand that it was the second-most-awesome present I got this year, because no one can dethrone my friend who had her son on my birthday. Sure, Rand, you got me a trip to Ohio, but YOU DIDN’T MAKE A PERSON so you’re really going to need to up your game next year.

I asked numerous people (translation: I spoke to no humans and did an internet search in my pajamas) about what I should see during our 24 hours in a city whose unofficial motto is “Please don’t talk about our baseball team’s mascot.” The Rock and Roll Hall of Fame was number one on basically everyone’s list, but I want to talk about number two.

(Note to self: I Want to Talk About Number Two would be a great title for our next book.)

Because after the Hall of Fame, the one thing you absolutely must do if you are in Cleveland is pay a visit to The Christmas Story House. I almost didn’t go – it was across town, and I was leaving in the afternoon, and I’m unabashedly lazy. But I wasn’t entirely certain that I’d ever be back in Cleveland, and A Christmas Story is one of my favorite holiday movies. 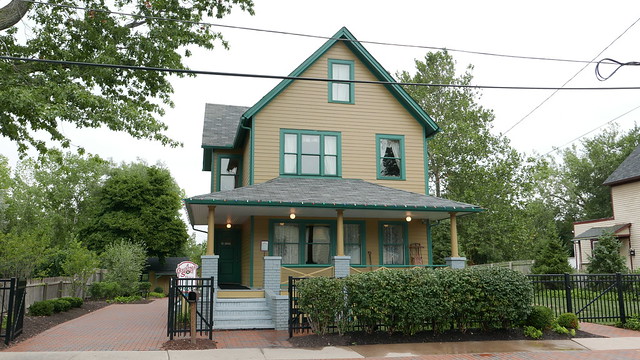 In the event that some of you have been living under a rock (HI, ROCK PEOPLE!) and are somehow unfamiliar with it, just turn on your TV. Seriously. It’s December 24. There’s a 100% chance it’s playing right now.

The movie is based on a memoir by Jean Shepherd. It follows the adventures of the young bespectacled protagonist, Ralphie, in the weeks leading up to Christmas and is narrated by Shepherd himself. A Red Rider B.B. gun – Ralphie’s desired Christmas gift, but one he fears he won’t get (“You’ll shoot your eye out!” the adults warn) features prominently in the story, as does a giant lamp that looks like a woman’s leg.

Though Shepherd grew up in Indiana, the film’s director eventually decided on Cleveland as the filming location after sending scouts out to 20 different cities. The shots of Ralphie and his family at the local department store (where they visit Santa) and throughout town are all taken in Cleveland.

With the exception of The Muppets Take Manhattan or The Princess Bride, I have seen this film probably more than any other. So on an oppressively humid September morning, I headed out to the Tremont neighborhood to pay a pilgrimage to Ralphie’s house.

Brian Jones, the museum’s creator and owner, had been a fan of the film since childhood. He purchased the two-story yellow home in 2005 on eBay (sight unseen) for $150,000. He would later discover that this was roughly five times the going rate for homes in that part of Cleveland. The bottom floor of the house had been largely gutted and there was blue vinyl siding affixed to the outside of it.

The house was, I should note, used mostly for exterior shots (the inside scenes were filmed on a sound stage). Jones watched the movie frame by frame and wrote up notes and designs for what the house should look like – effectively creating plans for a dwelling that had, up until that point, never really existed outside of the film.

After a quarter of a million dollars of renovations, the house opened Thanksgiving weekend of the next year.

Jones made his money back within a few months. 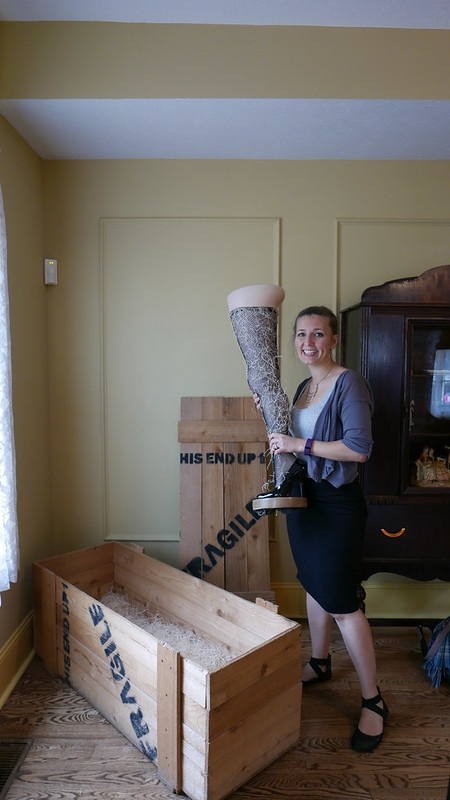 Me, looking like a goober, holding a major award.

The details are amazing. It’s clearly a labor of love. 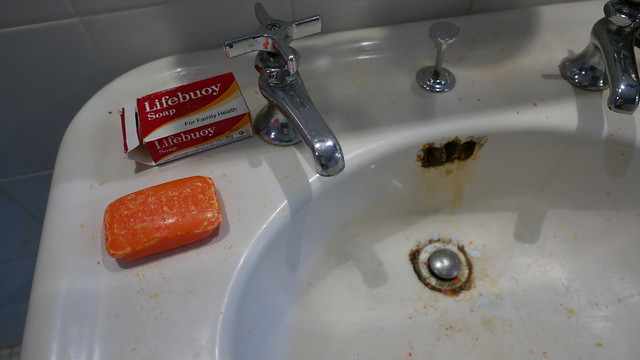 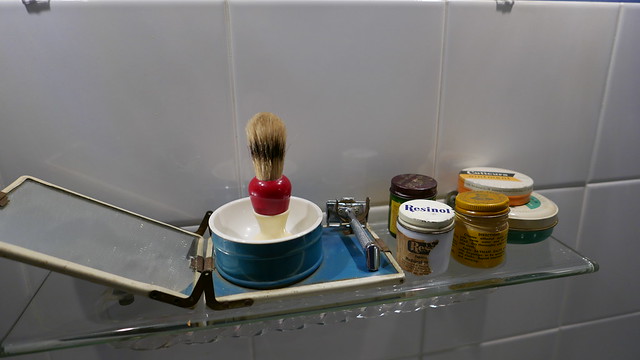 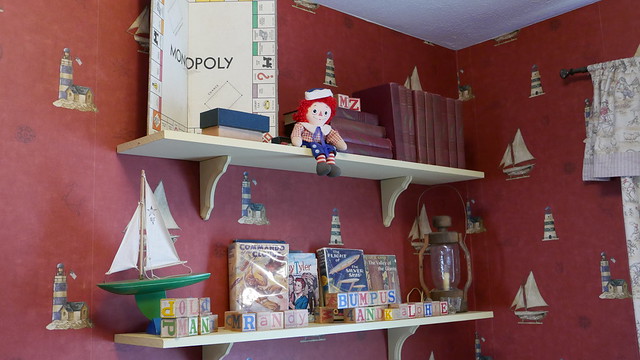 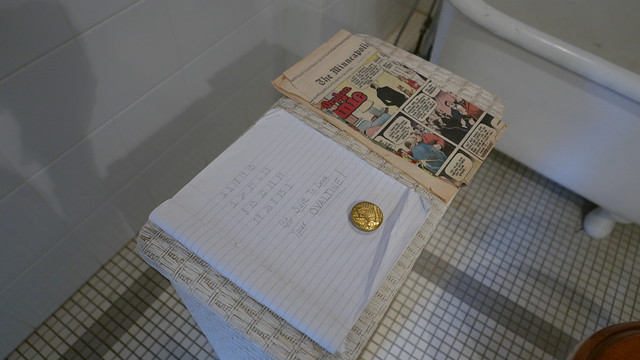 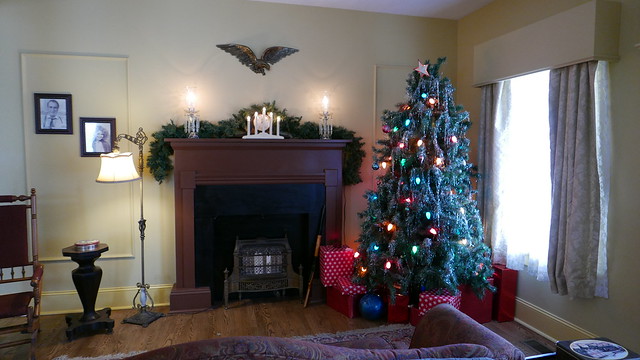 There’s even a phone in the hallway that you can pick up and hear Schwartz’s mom yelling, like she does in this scene:

–
Our guide explained that from October to January, the only tours offered are self-guided ones. Even before then, the crowds get more and more intense, and she usually won’t even pull out the Pink Nightmare costume if there are too many people. But on the steamy September day that I visited, there was only one other person on my tour, so we got to bound around in fuzzy bunny costumes to our heart’s content.

Our guide regaled us with all sorts of movie trivia which I have proceeded to parrot back to my husband with a disturbing level of fervor:

Jones later bought the house across the street and turned it into an aggressively cinnamon-scented gift shop and a museum which is home to all sorts of memorabilia from the movie. 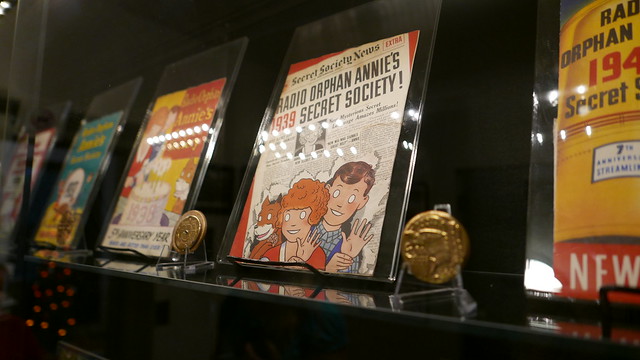 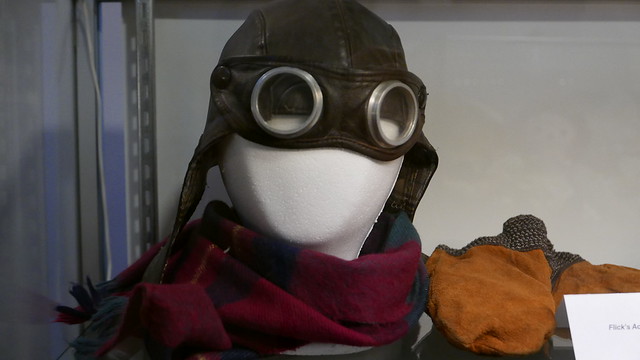 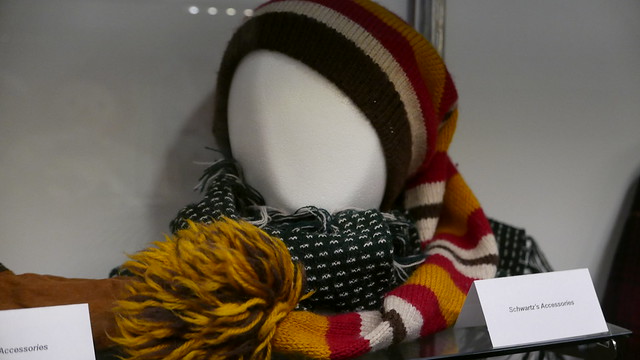 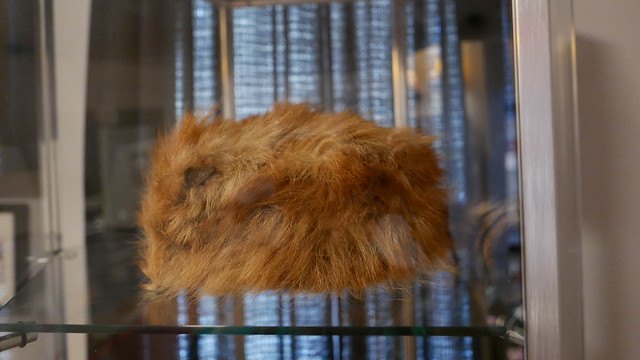 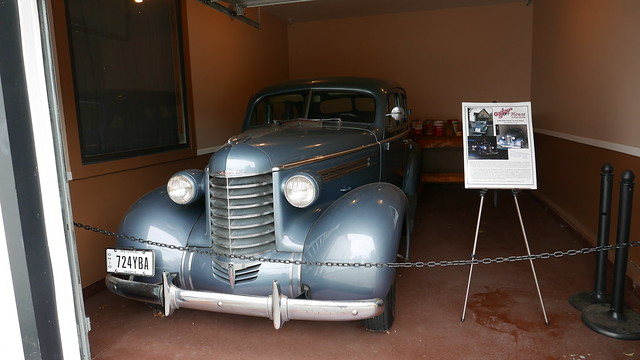 And yes, you can buy your very own pink bunny suit and slippers: 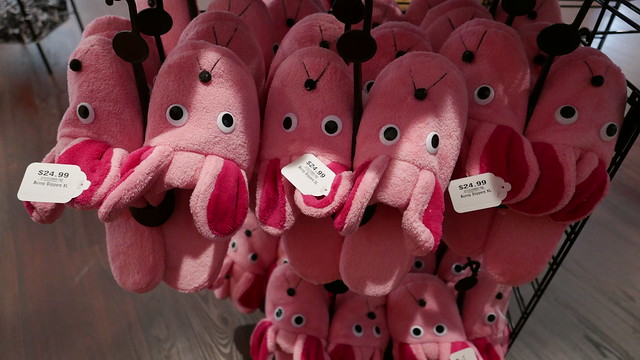 One of the recent acquisitions to the museum is one of the actual Red Rider B.B. guns from the movie. This version was made especially for the film – despite Shepherd’s distinct recollection to the contrary, there was never an iteration of the gun that had both a compass and a sundial (i.e., “a thing that tells time”) mass-produced for the public. 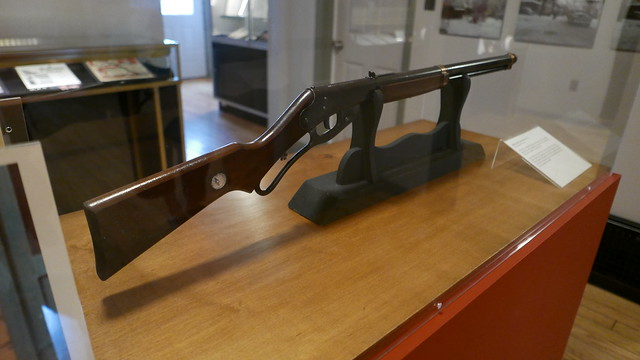 Our guide also told us that the original leg lamp was destroyed in the filming of the movie – and because no one had anticipated the film’s later popularity, the pieces were thrown away.

The house has created a lot of business in the nearby area – a small cottage industry has sprung up around it – there’s smattering of pubs and a few shops, and a neighboring house has a massive lot where visitors can park for $5. Most of the nearby houses have leg lamps in the window, as does the bar across the street from the house. 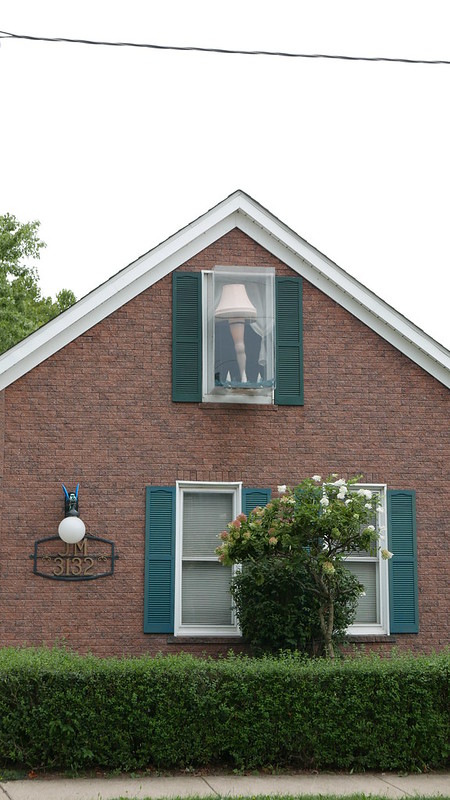 The gentleman who lives in this house (now in his 90s) was one of the delivery men who brought the leg lamp to Ralphie’s father in the movie.

A Christmas Story has even led to the creation of a non-profit organization that helps repair nearby homes in the area.

The fondness that Cleveland has for the house is palatable. The kid who played Ralphie’s little brother Randy is a local – now in his 40s, he still shows up at events and takes photos with fans. The enthusiasm with which our guide described the film made the lump of coal that is my heart glow.

Even for an old humbug like me – for whom the holiday season has long lost the luster it held when I was a kid – the whole thing was shockingly uplifting and fun. Which, honestly, is more than I could wish for from a Christmas movie.