The most common question I get from women who found out I’ve been to Turkey is this: What did you wear? 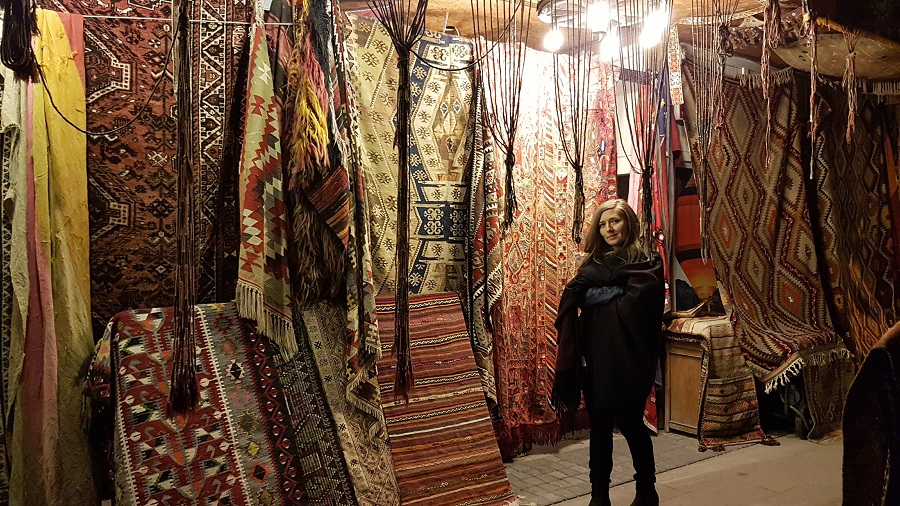 The answer is pretty much exactly what I wear in the states:

I’m a little hesitant to write about what it was like to wear a hijab (the term refers to a modest dress code, but also specifically to the headscarves that are often worn by Muslim women), because I HAVE NO CLUE. I mean, I know what it was like to ineptly drape a scarf over my head while going into a mosque in Turkey. That’s about it. I put on a headscarf in a country that is 90% Muslim so I could enter a few mosques. That’s very different than wearing one in the United States, where such a gesture can make you a target for hate crimes. It’s very different from wearing a scarf because it is a part of your religious and cultural identity. 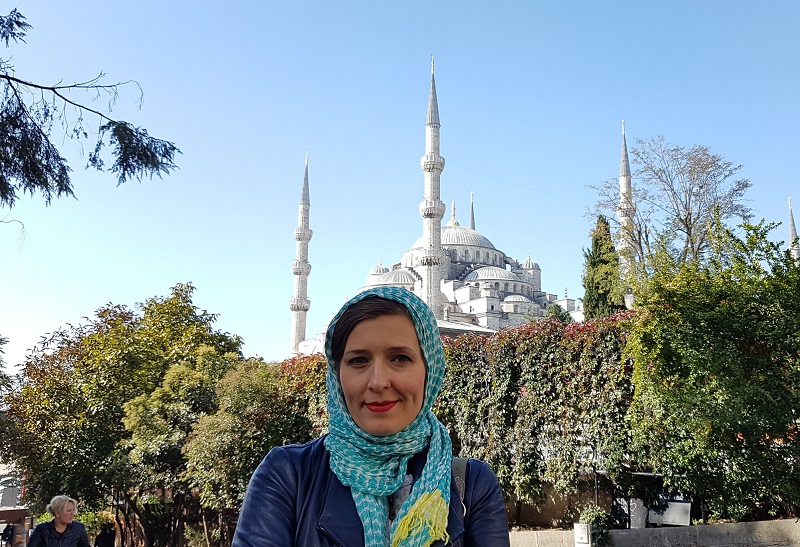 Notice how my hair is showing? That’s not what you’d want if you were a strict observer of Islam.

And god, I do not want to sound like some self-righteous woman who’s had some sort of deep profound experience because she wore a headscarf twice. Because that sort of thing is insufferable and condescending.

If you want to know the thoughts of Muslim women, then read. their. stories.

If you want to know what it was like for me – recovering-Catholic and human disaster – to wear a headscarf, read on.

Because here’s the thing: it wasn’t a big deal. Like, at all. I mean, I was terrible at it (I only thought to look up fashion bloggers who wore hijabs after the fact), but ultimately I was just adhering to a dress code. If you enter the Vatican, you can’t do so with bare shoulders or in shorts. If you run around town in a t-shirt that says “I FARTED” people look at you weird. (Which is ridiculous, because do they just expect you to tell them every single time?) Point is, we make thousands of choices like that – some significant, others not – in our lifetimes. Glasses. Contacts. Yarmulkes. Crucifixes. Those construction hats with beer cans on either side and a straw that lets you get drunk without all that pesky can lifting.

And, of course, hijabs. 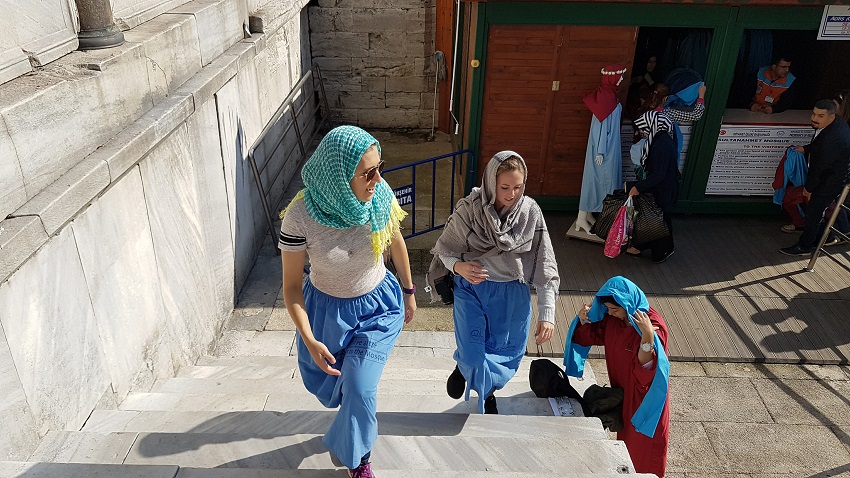 Look at me, strutting my stuff in a loaner skirt they give you at the ticket counter.

It is, simply, a way for Muslim women to express their faith and fulfill the commandment for modesty in clothing. Many other major religions have similar tenets. Hasidic Jewish women also wear modest clothing (skirts to the knees, long sleeves) and head coverings (wigs, berets, and snoods). Mormon dress codes (particularly for missionaries) emphasize modesty as well. And my mother has many memories from her childhood in Italy of nuns with shaved heads and women who would cover their hair with shawls before entering church. In Islam, as with so many other religions, these tenets are not observed by everyone. In Turkey, I saw women with their hair or faces covered, and women dressed as I was (though with decidedly fewer stains on their sweaters). And no one seemed to care. 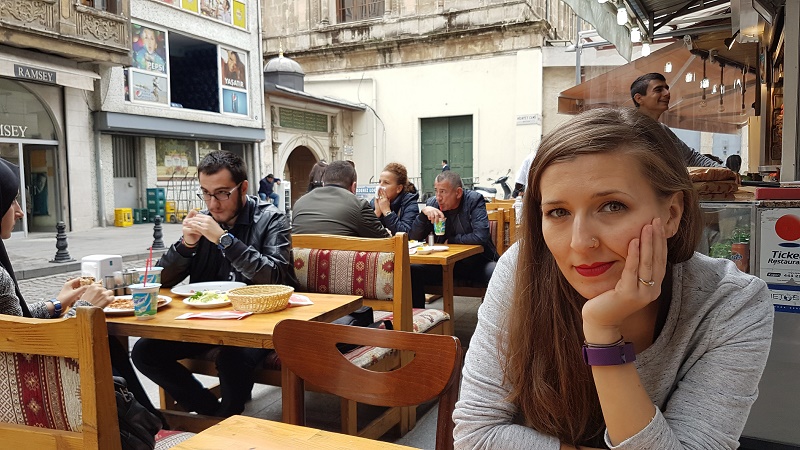 But the hijab, particularly in America, is often singled out and regarded differently by those unfamiliar with it. It can get equated with oppression – as though the only way a woman would ever wear one is because she has to. That it could never be a choice. This presumption, in and of itself, carries its own misogyny. We rob Muslim women of agency when we assume that every woman who wears a hijab, niqab, or burqa is doing so because she’s forced to. That mentality suggests that there is only one way for a woman to be liberated: by expressing herself according to a very specific set of western cultural norms.

Dress too conservatively, and you’re clearly oppressed. Dress too provocatively, and you unleash an entirely new branch of misogyny. As women, we’re required to meet to some sort of weird Goldilocks fashion metric – it’s never one of our own choosing, it has no male equivalent. My clothing has, over the scope of my life, prompted comments that I was a slut, a prude, too matronly, and “going to get raped in that.” We’re damned, either way.

This answer on Quora puts it rather brilliantly:

Religious expression is not a cry for help. Advocating for the ban of hijabs or similar articles of clothing is just as oppressive as the ideas those bans are trying to fight against. Women do not need another voice telling them what they can or cannot wear.

While in Turkey, we met up with a colleague of Rand’s who is Muslim-American. She’s from Michigan, but she and her husband have lived in Istanbul for the last few years. She told me about people’s reactions when they met her in person (as opposed to only knowing her online) and saw that she wore a hijab. About all the countless strange and hostile interactions she and her friends had had.

She noted that it never made any sense to her. Why someone’s misconceptions about the oppression of Islamic women would cause them to be cruel to those same women.

“I mean, if you think I’m oppressed, shouldn’t you be kind to me?”

And of course, that’s the logical conclusion, but let’s be clear: logic has no role here. People who judge or target Muslim women aren’t secret feminists. THAT ISN’T HOW FEMINISM WORKS. You don’t attack someone because you believe they don’t have enough rights.

She went on to tell me how a friend of hers had nearly been run off the road while driving in Texas, and the other driver had screamed at her to “go back to her own country” (a comment that is, in any circumstance, a completely shitty and bigoted thing to say, but made slightly more absurd by the fact that “her own country” IS AMERICA). This. Happened. Because. She. Was. Wearing. A. Scarf. Over. Her. Hair.

It’s terrifying, but perhaps not entirely surprising, given the anti-Muslim rhetoric of our President-Elect. Since his campaign began, he’s done a bang-up job of vilifying and dehumanizing Muslims – saying that people in the community are harboring terrorists and even calling for a database to keep tabs on everyone. That enrages me, it makes me want to scream, and it makes me fearful for people in my life. But it doesn’t make me fearful for my life, and therein lies my privilege.

Putting on a scarf didn’t give me intimate knowledge of what life is like for a Muslim woman anymore than wearing ill-fitting jeans a stained t-shirt will give you an idea of what it’s like to be me. But wearing a hijab, even for a few hours, was revelatory in one profound way: it was entirely familiar. Because covering your hair isn’t simply an aspect of Muslim culture but an aspect of human culture. We wear wedding veils. We wear hijabs. We wear snoods and yarmulkes. We wear baseball caps that read “MAKE AMERICA GAY AGAIN.”

Some of these acts are religious. Some are political. Some are sartorial. But all of them are decidedly human. In the end, the only thing strange about wearing a headscarf was that it wasn’t strange at all.