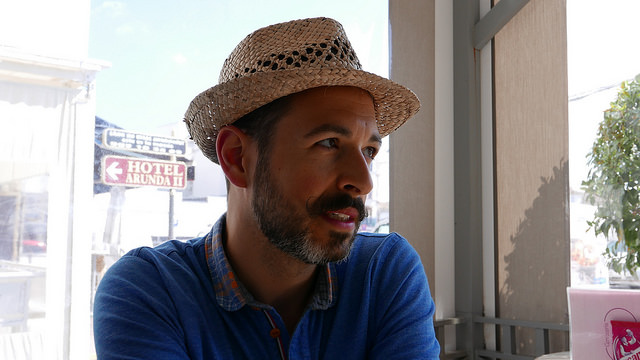 I have a confession.

My husband, Rand, is more fashionable than me. This is contrary to everything that movies and television have taught me, where the female sex is supposed to be stylish, and men can run around looking like they’re in the middle of washing their car. Behold.

But that’s not the case with me and Rand. He consistently looks great. And sometimes, despite knowing better, that makes me feel really awkward. 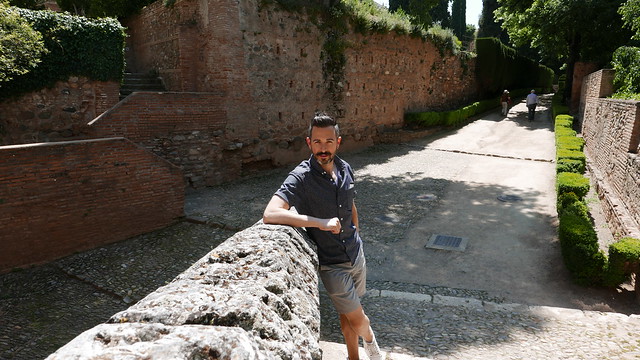 I mean … what the fuck is even going on here? 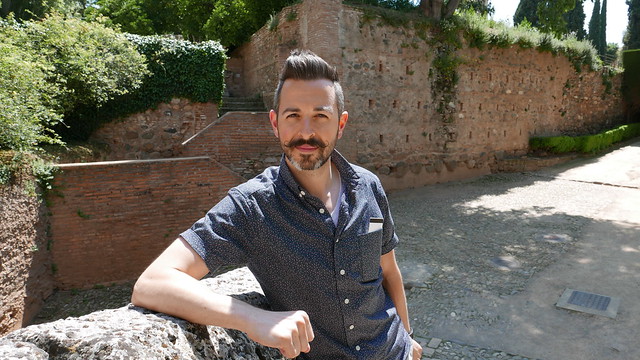 It’s like a scene from The Most Interesting Man in The World: The Early Years. It’s like the sorting hat at Hogwarts put him in a house called “OH HELL YES.” He looks like he went to Jeff Goldblum’s Fashion Summer Day Camp for 9 straight years and earned lots of merit badges having to do with smoldering. 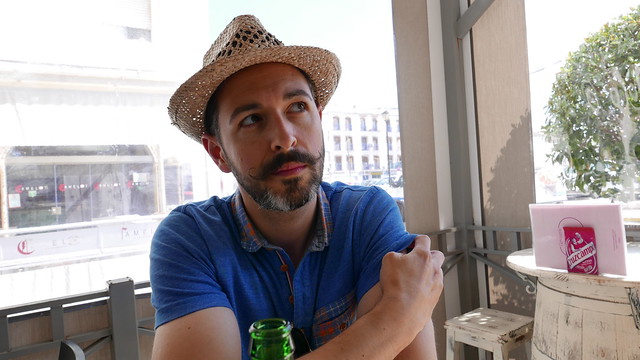 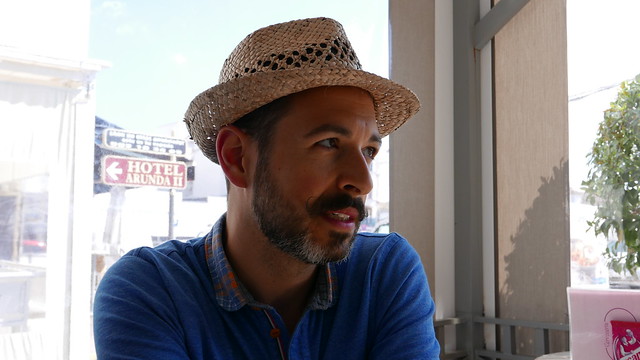 My life is a nightmare. I am married to a guy who looks good in 90-degree weather, while jet-lagged, while hiking the goddamn rock of Gibraltar, the latter feat being so preposterous that our friends who were traveling with us could only turn to me and ask, “Seriously, what the fuck?”

I don’t have an answer for them. I have loved this man for nearly 15 years and it has always been like this. He smells like cedarwood and incense and raspberries and competence and he rarely has cake frosting on his shirt. 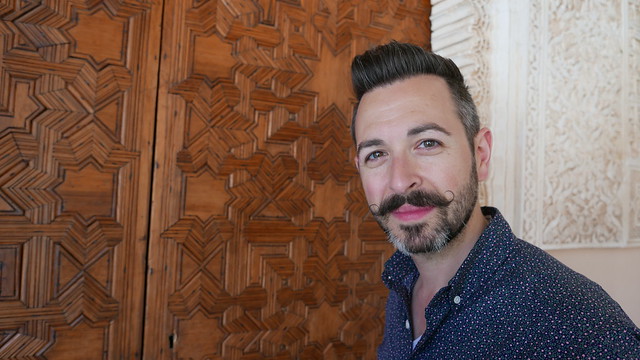 Australian comedian Celeste Barber recently wrote about her life with her hot husband and all the difficulties it carries with it. She has to deal with random people walking up to her and saying “Well done” while gesturing to her dishy partner, which is sort of complimentary in an incredibly insulting way (like when dogs hump your leg. It’s like, “I guess I’m flattered, but WTF.”)

This has happened to me occasionally. People will look at Rand appraisingly and usually give me a proud nod. But more often than not, they don’t even realize we’re together, because the dude looks like he’s from an entirely different tax bracket. 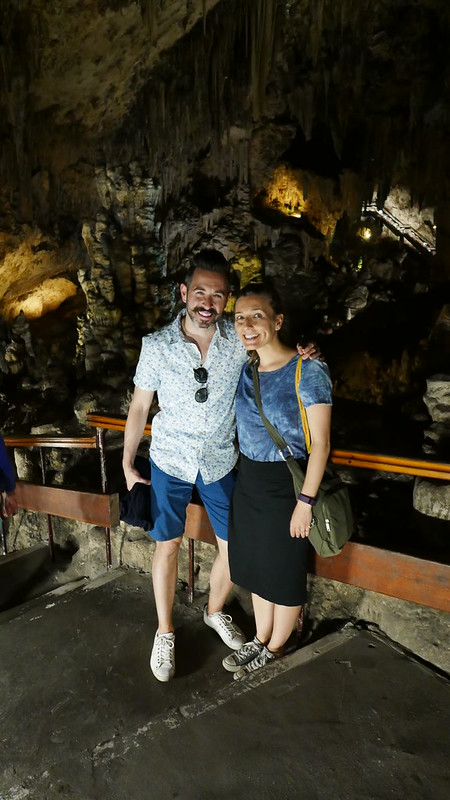 And I look like I’m cleaning out my car circa 1998. I look like it’s Casual Friday at an accounting firm manned by hobbits. I look like promotional consideration has been paid for by apathy, color blindness, and the irregular clothing section of Ross (which is, for the uninformed, the entire store). 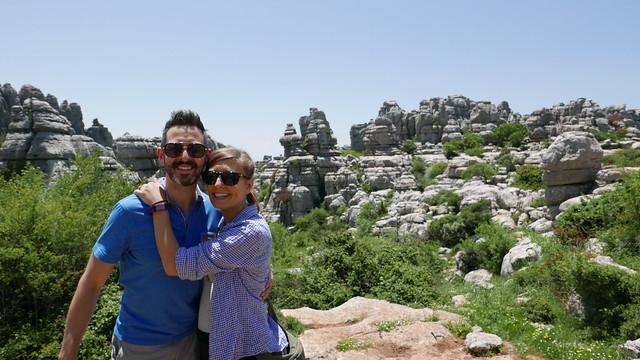 I look like a crazed fan who’s been standing out in the sun for hours hoping to get a photo with the star she has an interminable crush on (an analogy that isn’t even that far from reality). 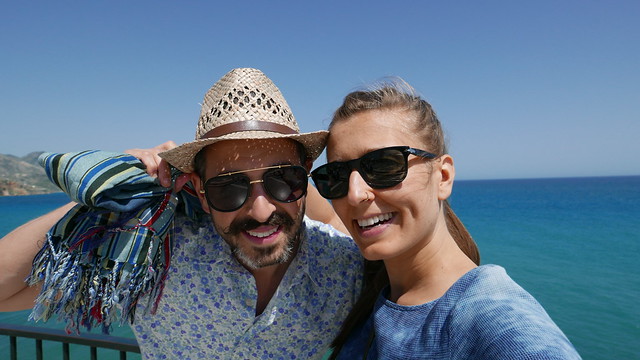 Dude is flawless. All the time.

Here Rand is wearing a shirt by an indie French designer and I have on a tank top that I got on sale at Ann Taylor Loft even though it was the wrong size. I literally slept in it the night before and was like, “Ah, what the hell.” 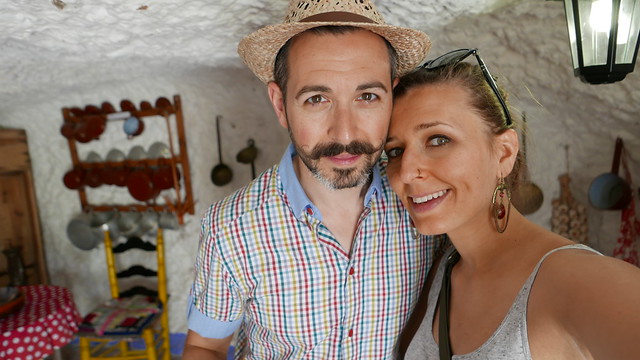 Rand looks like he isn’t even warm and it was literally a hundred degrees.

My editor recently asked me for a placeholder author photo for my book, and I had to send her one from 2012, because that was the only one I could find where I didn’t look like I was shipwrecked.

And I know what you are thinking: for fuck’s sake, quit complaining and just LEARN TO DRESS YOURSELF. But darlings, I have tried. That’s the terrible part: this is me trying. I’m wearing jewelry and make up and I’ve done my hair, even though it seems like I picked this look out of I Think She Just Came From the Gym Magazine.

Society as a whole has created the impression that as a woman, I should just know this stuff. That once you start menstruating, you also understand whatever the hell a sheath is, and how to find one that works perfectly with your body type (even if that body type is, as once described by the saleswoman I encountered in a London boutique, challenging.) There’s this understanding that the female sex is supposed to be fashionable, and those of us who have male partners are supposed to dress them, because boys are utterly clueless, AM I RITE, LADIES? HA HA HA HA HA SOMETHING SOMETHING CHRISTIAN LOUBOUTIN.

This bullshit misogyny goes both ways. We think that men – and in particular, straight men – aren’t supposed to understand fashion. If they do, it somehow negates their masculinity. I’ve had straight women tell me, bemused, how they have to buy all their male partner’s clothes because their guys just HATE to shop. And when I tell them that I’ve tried to buy things for Rand, but I usually miss the mark because he’s so particular, they just sort of stare at me for a long time.

Because clearly, if a straight man likes to shop, something is very, very wrong with him. It’s fine if a gay guy understands the traditionally female domain of clothing, but if a straight guy does it? Well …

Rand occasionally gets homophobic slurs hurled at him (most recently while walking down a street of a major Midwestern city). He obviously doesn’t mind if people think he’s gay (because, you know, being gay isn’t an insult. Duh. A few weeks ago, a handsome young man stopped dead in his tracks when he saw Rand coming around a corner, looked him up and down and said, “Oh, my.” Rand smiling ear to ear, looked at me afterwards and said, “Still got it.”), but he does hate the hate. He told me he was grateful for the glimpse at what so many of our friends go through – and also sort of amazed at the judgments people make based on how you look.

And while so many of us are great at not being superficial when it comes to others, we have trouble extending that same human decency to ourselves. I would never pick on a friend for wearing her old Converse shoes out to a bar, but I do that to myself all the time.  I consistently feel self-conscious because the love of my life … well, he cleans up better than me. I say this not as a desperate attempt to conjure up compliments for myself, but as a statement of fact. As though that’s somehow what’s important.

Let me be clear: clothes are great. They keep us warm, save us from lots of awkward interactions with family members, and prevent us from getting injured while cooking bacon. They are a great vehicle for expressing yourself. But there isn’t a right way or a wrong way to do it. If it’s what you are passionate about, that’s awesome. But stop picking on yourself if you can’t figure out the whole high-waisted short thing. Because – and I know we all hear this all the time, but it bears repeating – it’s really not that important. How we look is due to dozens of things we can scarcely control: circumstance, genetics, our income and the income of our parents’. It was decided at a million different junctions in our lives: when we were in the womb, when we decided to shave our head in college, when realized that we hated running and high heels and that we loved pants that felt like pajamas.

And none of it really matters.

If Rand wants to take a stand against traditional gender roles and sexism, and do so while looking downright gorgeous? I need to be cool with that. I need to remember that it’s not a reflection on me. If I want to dress up, I can. But I don’t have to prove my worth as his partner via my appearance. I’ll wear cargo shorts while he turns heads.

But make no mistake: that pretty little thing all dolled up in the corner? The one with the legs that keep going and going? He’s with me.