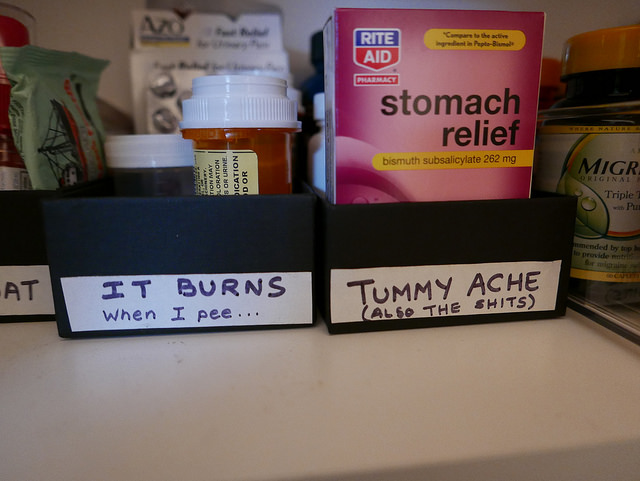 Posted in: "Lifestyle", Life at Home, Nothing to Do With Travel

One of the fun parts about meeting with publishers is that they start throwing books at you (note: if they do this literally, then you are likely not talking to a publisher. You may be talking to a monkey. Also, in this scenario, the books are probably pooh. But let’s focus on the good: you got a meeting with a monkey! Well done). You enter their offices (the publisher’s, not the monkey’s), and they’ve laid out some of their bestsellers as a visual resume that they publish real books and not crudely stapled together pamphlets detailing why fluoride is a mind-control device.

“Take whatever you want,” they say, and then your eyes glaze over, and a little bit of spittle starts to come out of your mouth, and you realize that you need to keep your shit together because this could be someone with whom you will work. But really, you just want throw yourself on the pile of books and make weird gurgling sounds. In this scenario, you may have also removed your pants by this point.

(God, you are such a book frotteur. You are fairly certain this is why they moved the bargain table at your local bookstore to the back corner of the second floor, away from everything.)

All of this preamble explains how I found myself in possession of a home-organization book. Which is not something I’d have purchased on my own, ever. But I got one from one of the publishers I met with (I’m not posting the exact book, since it was from a publisher that I ultimately did not end up going with. And don’t you dare try and guess or I’ll come over to your house and eat your pets).

I’m a fan of home organization, and I dabble in it, but I can’t commit whole-heartedly. It’s sort of like vegetarianism. I find it admirable and interesting, and I might even be lured into doing it every now and then, but mostly I want to eat a steak while wondering what Dodo bird tasted like.

So I embarked on a half-assed attempt to get my life in order. 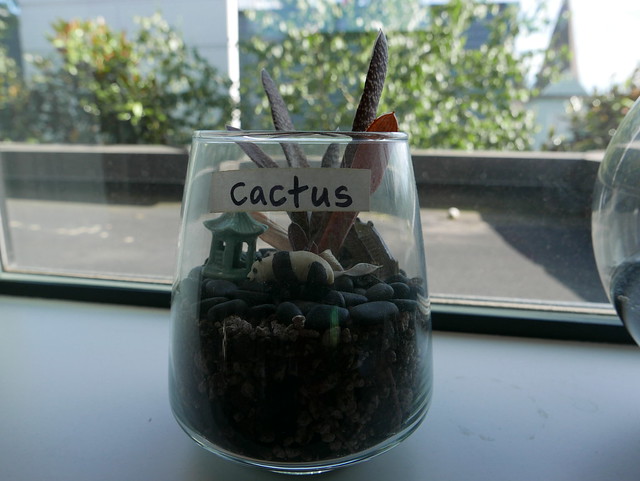 The first thing that the book instructed me to do was to start throwing things out. There are lots of ways you can decide what to toss, and one of the most common methods is to ask yourself if a particular item brings you joy, and if it doesn’t, you get rid of it.

This is a terrible idea.

Here is a list of things in my life that don’t bring me joy but I supposedly can’t dump into the trash or sell to the guy who lives in my mom’s garage:

I think a better question to ask is “Will I end up in Federal Tax Prison or will my spouse leave me if I throw this out?” If so, put it in the “maybe” pile.

The next thing you need to do is get a whole bunch of boxes of indeterminate sizes, and label them with the things you want to put inside. This can be useful, when you do it right, or simply fodder for your husband when he has you legally declared unfit to manage your own finances.

Sometimes, if you are lucky, you will find things in your house that are already conveniently labeled. Like this. 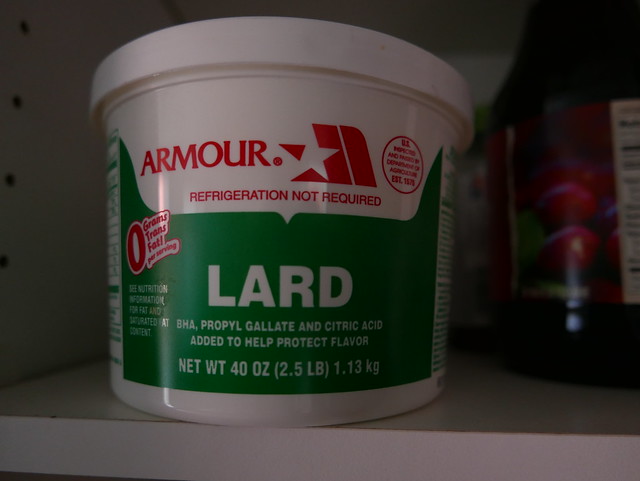 The nice part is that when I’m done with the (alarmingly shelf-stable) rendered animal fat that is currently in there, I’ll be able to reuse it to store all the other lard I have lying around the house.

The most pressing issue was my medicine cabinet, which I reorganized according to ailment. For pain relievers, I took the direct approach. 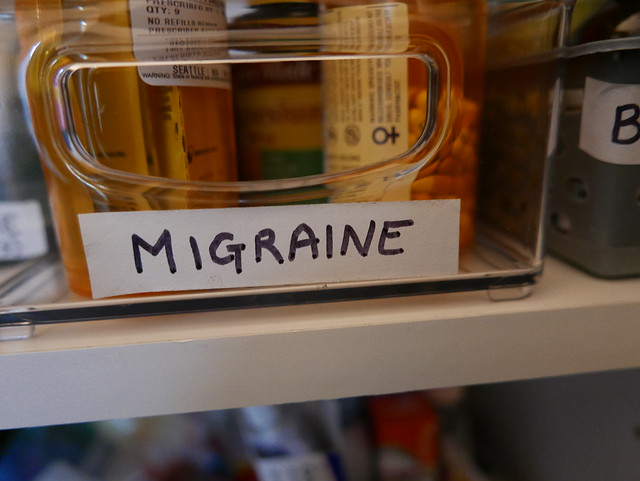 Yes, I really have a whole bin dedicated to migraines. 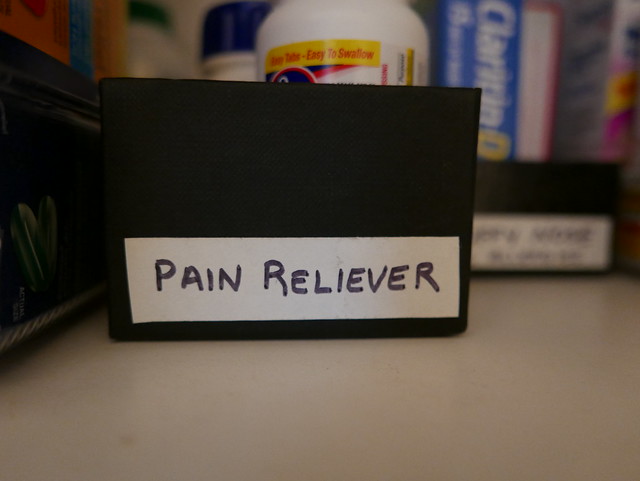 Depending on how serious the injury, I tried to be as direct as possible. 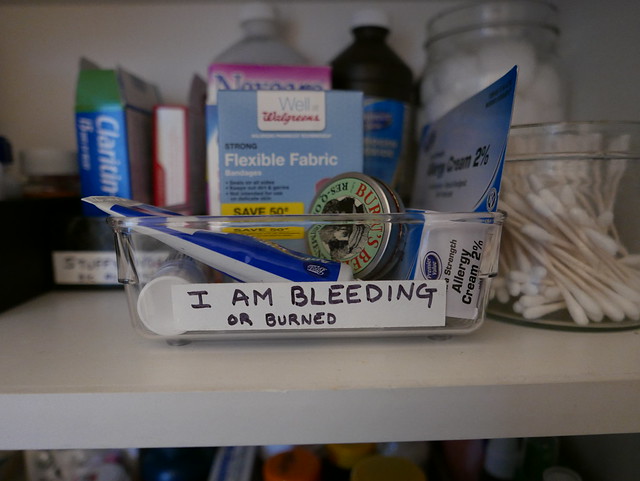 This was mostly for Rand. He doesn’t say stuff like “I need a band-aid.” He says, “AUUUGGGHHHHH!! DEAR GOD HELP ME!” Which is just hilarious. 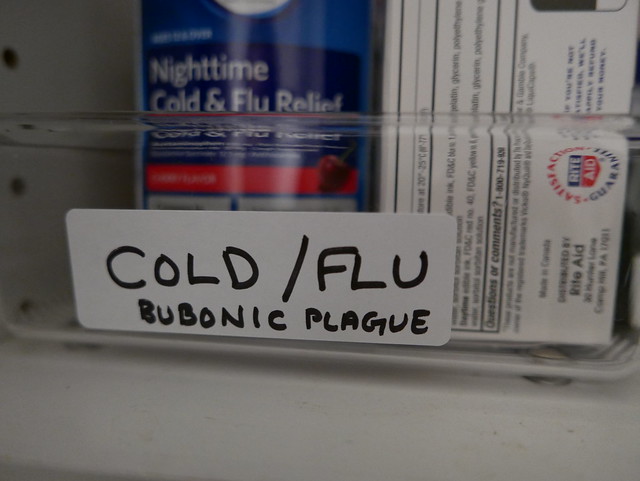 We don’t get colds in my house. We get something that, had we lived in medieval times, would have made people assume that witchcraft was somehow to blame.

Then I started using a little bit of artistic license. 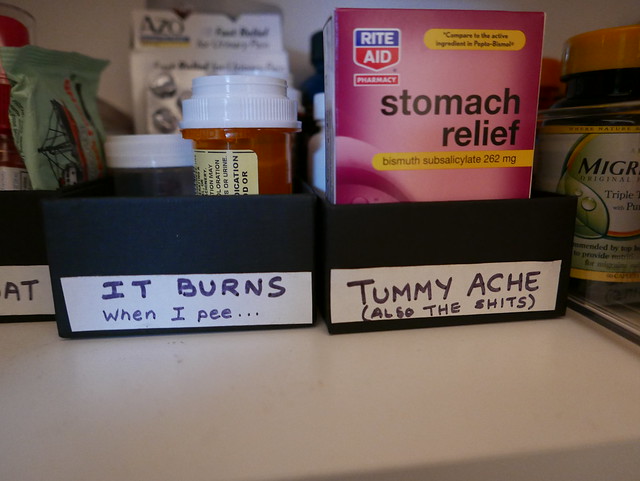 Don’t email me telling me to “get that checked out.” Believe me, I have. 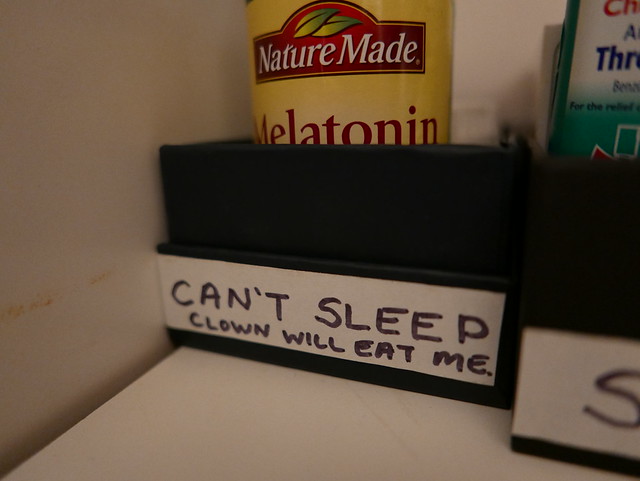 This is my favorite.

This all worked out so alarmingly well that I decided to get more bins and label other things in my house, but I threw the whole “organize things in a way that makes sense to you” idea out the window. Instead, COCAINE! 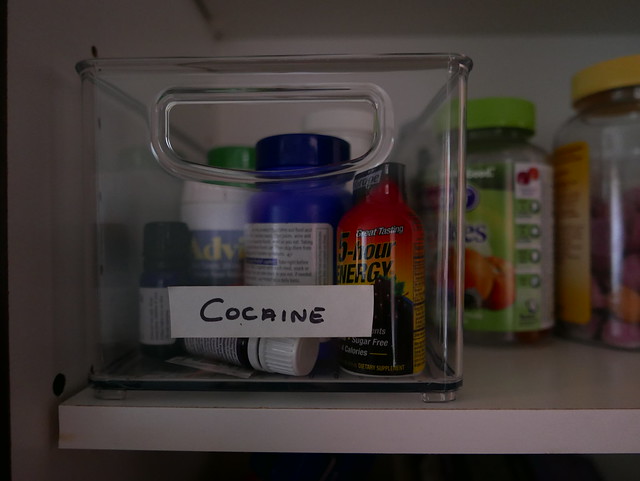 My junk drawer fared remarkably well. Just look at it. It’s a goddamn thing of beauty. 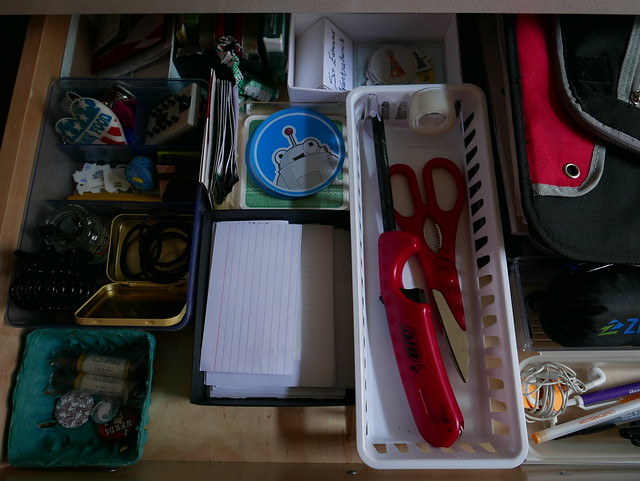 My snack drawer, less so. 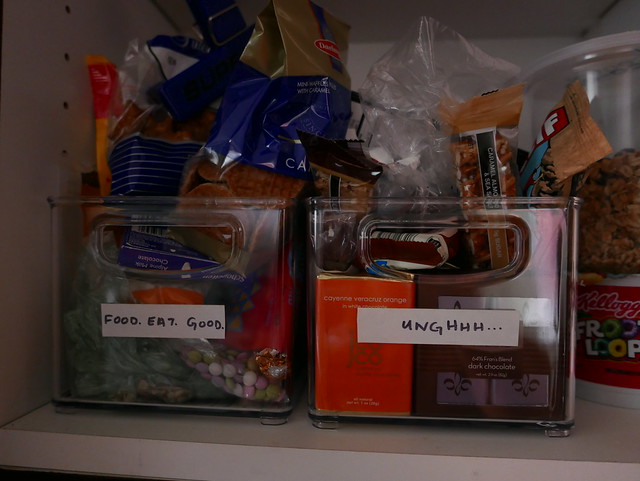 I realized it was never gonna stay in order so I just wrote down the things I mutter when I’m hungry.

And then I just lost my damn mind, which is how most of my self-improvement stories turn out. I originally thought it would be funny to label a small box like this. 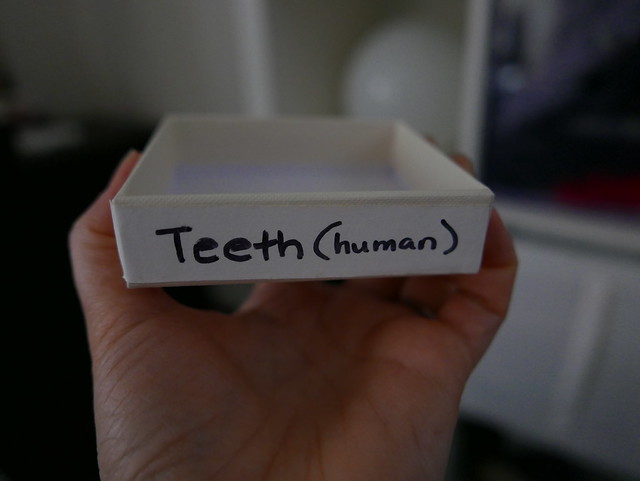 Then I thought it would be even funnier if I labeled a HUGE box like that. 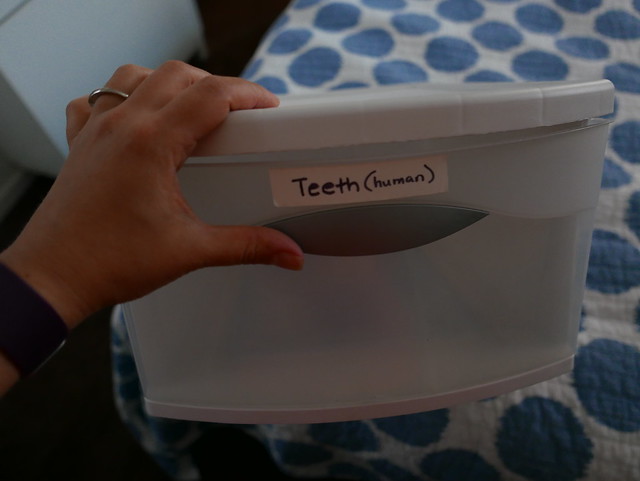 But I’m just setting myself up for failure because honestly WHERE AM I GOING TO FIND THAT MANY TEETH? I’ve counted my own and Rand’s and that only gets us into the 60s, and also my husband gets really nervous when I start taking inventory of his body parts.

All in all, it’s been a nice little foray into a simpler life. I have no idea where I put the dental bill I need to pay, but this is surprisingly helpful: 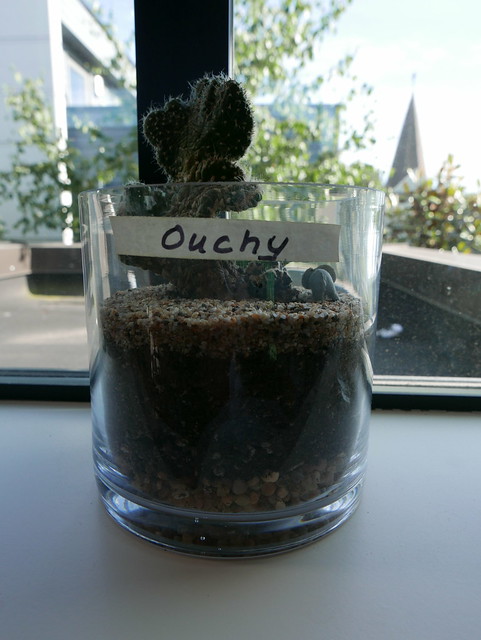 I am on my way to inner peace. Now if you’ll excuse me, I need some food eat good.