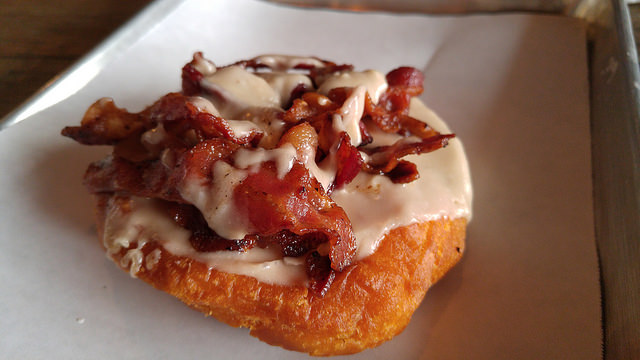 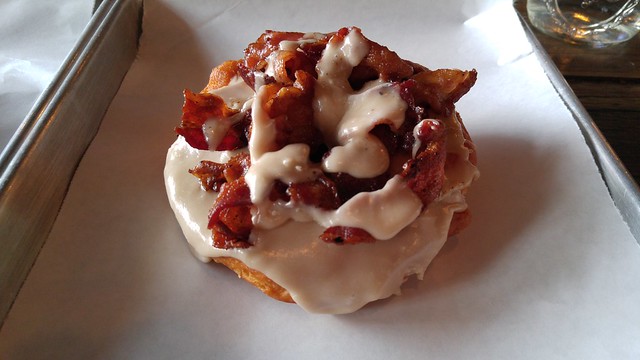 Forgive me, colon, for I have sinned. The Flying Pig doughnut at Gourdough’s.

When I was a junior and senior in high school, I ate fast food nearly every single day for lunch. I can rarely recall an exception to this, because apparently processed fats make the inside of your brain too greasy for memories to stick to them, but I have a sneaking suspicion there were at least two years of my life in which I didn’t eat a vegetable that wasn’t a curly fry. 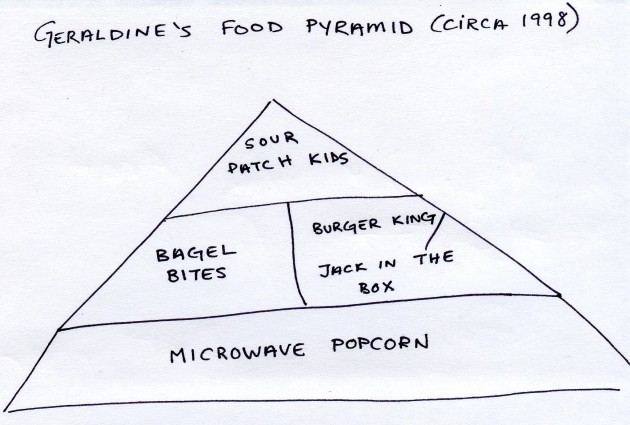 Did I mention I was a size 4? Being seventeen is evolution’s way of mocking us. You are basically invincible, ramming whatever fits into your mouth – bags of Cheetos, entire pizzas, the penises of cute nerds – until your mid-20s, after which your body is just like, “Nobody has ever lived this long before so we don’t know what the fuck to do.” My mother-in-law once told me that it was because our bodies had started storing fat for when we were going to be banished from our agrarian societies and left to die on some barren plain. And then she just looked at me for a long while.

In my 30s, I’ve found that the only way to fit to into actual pants (and not several yards of burlap crudely held in place with duct tape and prayer) is to eat a freakish amount of vegetables and avoid almost everything that once brought me joy. Sometimes I say fuck it, though, because life is short, and my husband has promised not to drive me out to the middle of Kansas and leave me there just because I look like a double-scooped ice cream cone whenever I wear skinny jeans. (I make him swear it on a stack of papers on which I’ve handwritten the lyrics to “Baby Got Back.”) 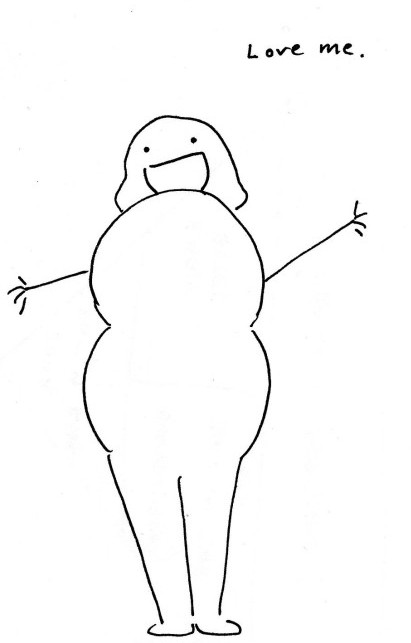 The thing is this: we are, for the most part, fine. Seriously. All of us are pretty much okay (yes, yes, you are). We might be a little squishier than we’d prefer, and we have parts about us that we don’t really like, but so do movie stars and they’re movie stars. And that brief nod to self-acceptance is how I can completely justify our visit to Gourdough‘s in Austin, Texas.

Our friend Tony recommended the place to us, and after reading the phrase “made-to-order donuts,” I grabbed my husband by the ears and gently screamed, “Take me there immediately,” and he replied, “Baby, you’re scaring me,” which is his cute little way of saying yes. We popped in a little after lunchtime, and found the place virtually empty, presumably because all their other patrons had died or been hospitalized.

My eyes glazed over when I looked at the menu because Gourdough’s doesn’t simply just serve donuts, but does so under the guise that they are somehow actual sustenance and not, as Rand put it, “an affront to our evolutionary relationship with food.”

Please forgive me, but from here on out I will be using the alternate spelling of the fried concoction – I am putting the “ugh” back in “doughnuts”, because I must.

The menu reads like something out of District 1 in The Hunger Games. Doughnuts are used in place of burger buns or sandwich bread. They serve as the coating around mozzarella sticks and hot dogs. There is an entire section of the menu dedicated to doughnut entrees, which mostly appear to consist of topping a doughnut with some variant of fried meat. The phrase “chicken fried bacon” appears on the description of a salad.

It is worth noting that the doughnut burgers are available with a veggie patty option, but I think it’s safe to assume that anyone who’s made it that far has stopped caring about things like cholesterol or the lives of animals. 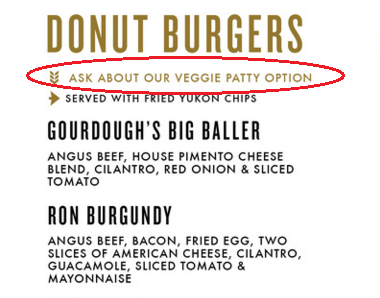 Catering to those who still want to pretend that they give a damn.

I went straight for the “Dessert Donuts” section of the menu because – I don’t know – it felt more sincere? Also, the chances of throwing it all up after walking for several miles under a hot Texan sun seemed less likely. Rand refused to take part in the ordering, which is what is known in the criminal world as “plausible deniability”, so I ordered us the Flying Pig – a  doughnut topped with maple icing and bacon, and a Miss Shortcake – topped with cream cheese icing and strawberries. Those poor strawberries – I somehow had convinced myself that they would be able to counteract the deluge of fat and carbohydrates with which we were about to abuse our colons.

In reality, though, they were like Keanu Reeves taking on Shakespeare – we applaud the effort, but our hero is clearly ill-suited to the task at hand. I would need to eat kale for a century to undo this damage.

They arrived on large metal platters, which wasn’t necessary in Rand’s case because he eats like a normal, dignified adult and doesn’t need the human equivalent of a feeding trough. 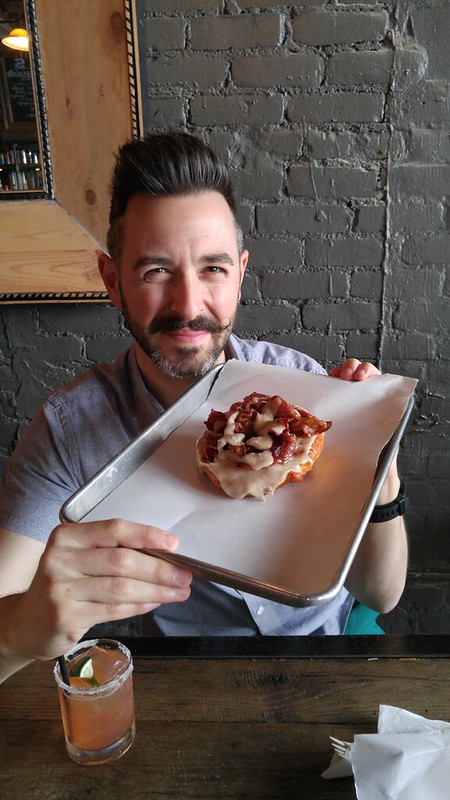 I DARE YOU TO FIND A MORE DELICIOUS COMBO ON THIS EARTH. 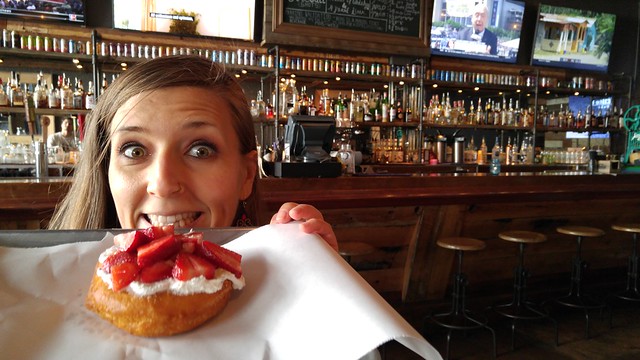 This could be the PSA photo for an anti-sugar campaign. 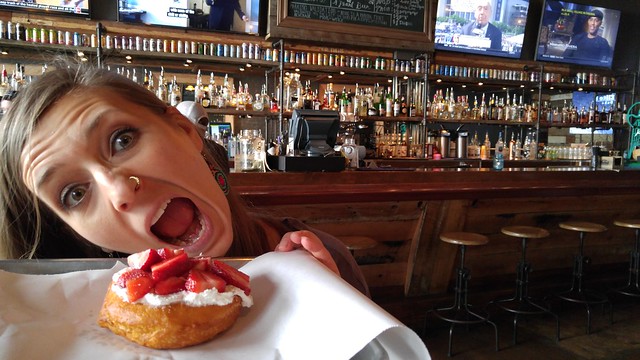 Rand: “What are you even doing? That is not how you eat food.”

These were, without hyperbole, some of the best goddamn doughnuts I have ever had. I wish I could wax poetic about them, but the synapses in my brain were firing too fiercely for me to process what was going on. I know only that I took a bite of the Flying Pig, looked at my husband and said the following with utter sincerity:

“I think I just had a sexual experience with this doughnut.”

It was sweet and salty and the doughnut was golden brown and JUST LOOK AT THE DAMN THING: 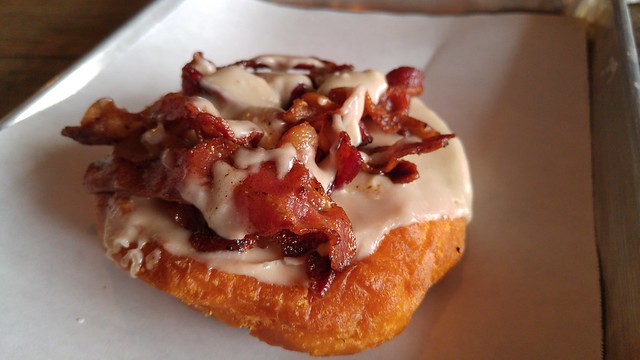 In hindsight, I was bothered by how primal my reaction was. I would have fought off cavepeople for this hoop of fried sin.

There was another doughnut, too – the Miss Shortcake. It was insanely good (it would have been the crown jewel of any other doughnut shop), but next to the Flying Pig it felt hypocritical. Fresh fruit? Really? What was I thinking? I was already eating a doughnut, so why not just go whole hog? I started thinking we should have ordered the one with fried chicken on top. I think I was experiencing doughnut poisoning. 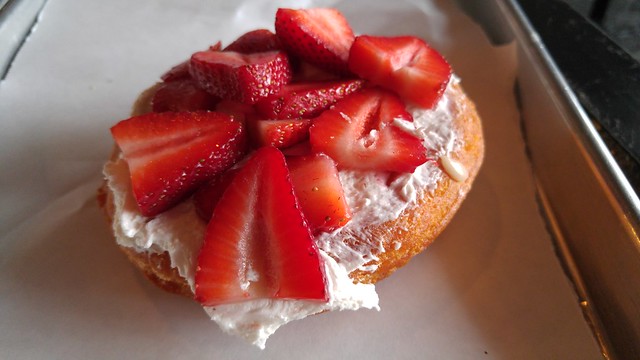 To be fair, this was delicious, too.

Together, Rand and I finished half of what we ordered before we agreed to walk away.

“What? I’m fine. This is easy. I have plenty of willpower,” I told him. But in actuality I was having trouble eating because my left arm was tingling. Rand said I had the face of restraint, but I think it’s pretty obviously the face of a woman who is drunk on doughnuts: 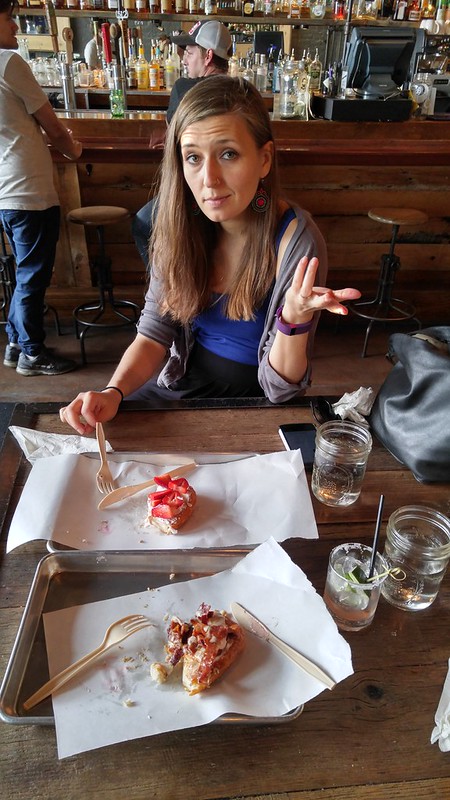 I won’t lie to you: I easily could have eaten the whole thing. I’d have moaned miserably and felt ill and yet it all might have been worth it.

“Thank god we don’t have this place in Seattle,” Rand said, and I nodded feebly. It is not the sort of thing you can do every day. Or even every month. At least, not unless you are seventeen.