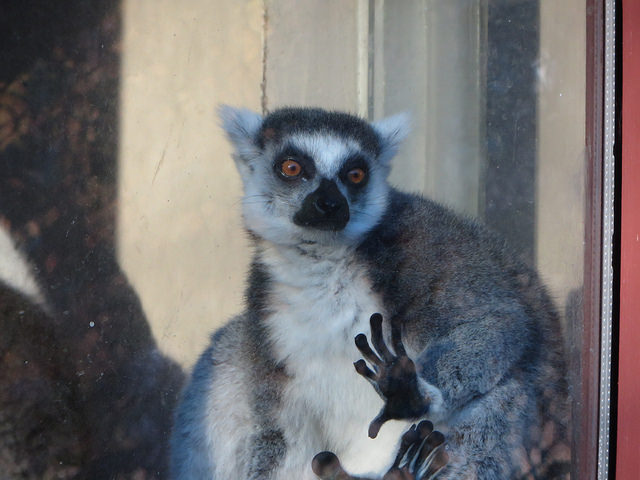 It’s the first Monday in March of a leap year – you know that means, right? IT’S OMFG I LOVE LEMURS DAY.

(Note: OMFG I LOVE LEMURS DAY is something I just made up.)

Had I had any forethought AT ALL I’d have put this post up on Leap Day, because, you know, lemurs leap. Regrets, I have a few. 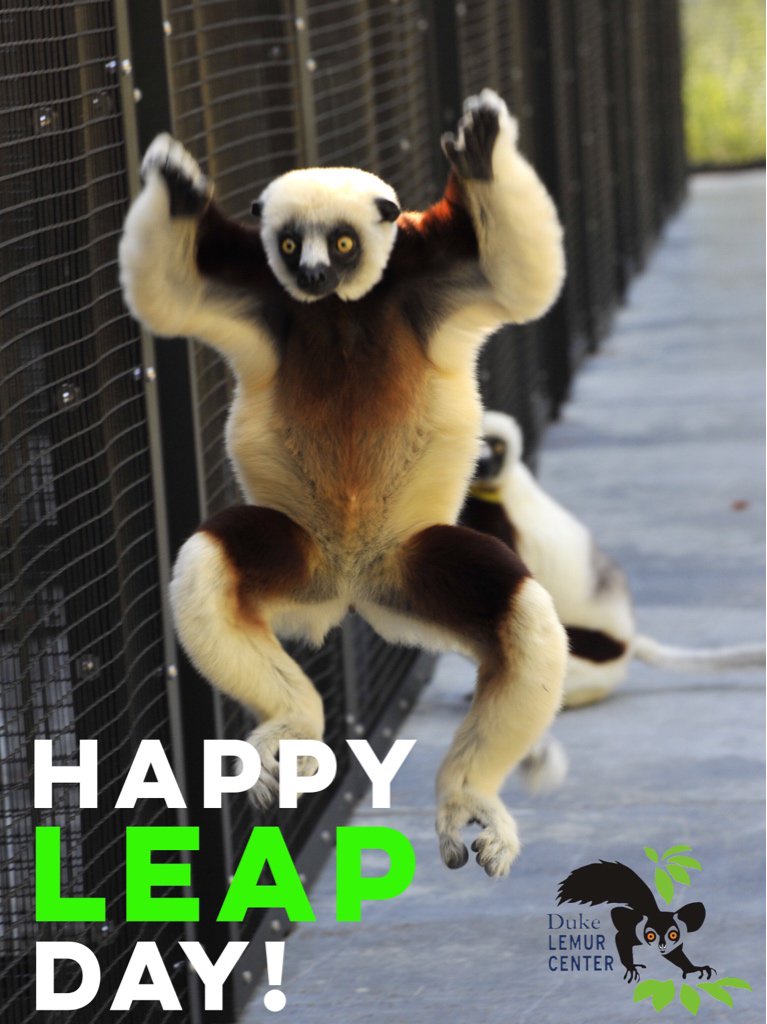 THE DUKE LEMUR CENTER DID NOT MISS THE OPPORTUNITY, THOUGH.

What better day than a made-up holiday to tell you about these little furry snuggleballs? (Note: snuggleballs is a real, biologically accurate term. It applies to lemurs, slow lorises, and baby pandas.)

While we were i nNorth Carolina last fall, Rand and I spent an afternoon in Durham visiting the Duke Lemur Center, home to the largest and most diverse collection of lemurs outside of Madagascar. The center is actual working research facility, but fear not – at no point are the little lemurs attached to electrodes or forced to watch and give feedback on pilots for reality TV shows. The research conducted is all non-invasive. It mostly seems to consist of people observing lemurs being adorable, which is a branch of science that I feel like I would have excelled at had I known it even existed.

“Dr. DeRuiter, what are your findings today?”

“Sir, most of lemurs are being particularly precious, but several, including Mr. Wigglesworth, have shown an excess of cuteness that lies far outside of the norm. I’m going to dress him up like a tiny Sherlock Holmes and snuggle him for several hours before I can come to any proper conclusions.”

See? I HAVE MISSED MY CALLING. 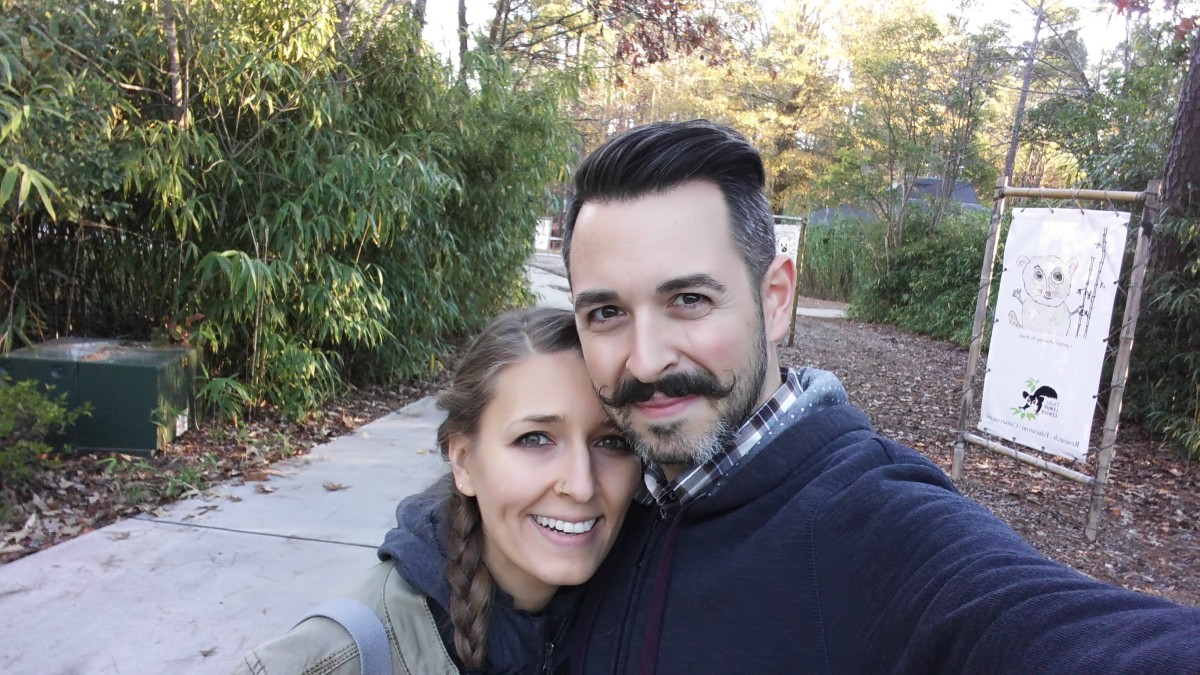 In order to visit the lemurs at Duke, you have to book a tour ahead of time. They fill up quickly, but Rand and I managed to get a day-of reservation (which is pretty unusual and super duper lucky. Don’t be like us). The tour lasts just over an hour, and is incredibly affordable ($12 per person), and while our guide, Chris, was absolutely wonderful and charming, I feel like I should prepare you for one sad reality of it:

You do not, at any point of the tour, get to cuddle the lemurs.

And you absolutely do not get to dress them in the tiny costumes you brought. No, not even the deerstalker hat. 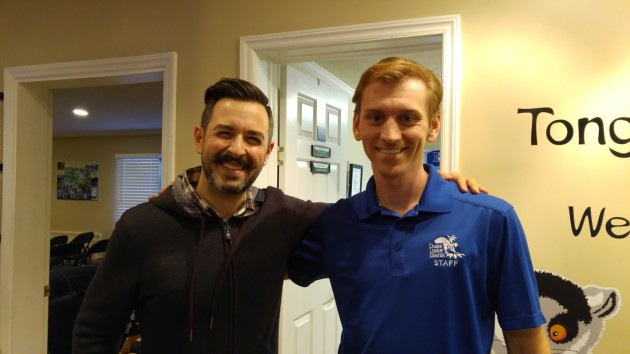 Rand with our stellar guide, Chris.

Which makes you wonder why you should even bother going at all, right? But you do get to learn a lot about lemurs, and the facility. Plus, if you are lucky, someone in your tour group WILL NOT BELIEVE IN EVOLUTION and will snort audibly every time Chris mentions it. Which will get you snorting, and then the original snorter will think they’ve found a kindred spirit and will snort even louder the next time.

And it will be a circle of snorting and all of it will be very, very funny.

I should stop rambling and just get to the photos, right? 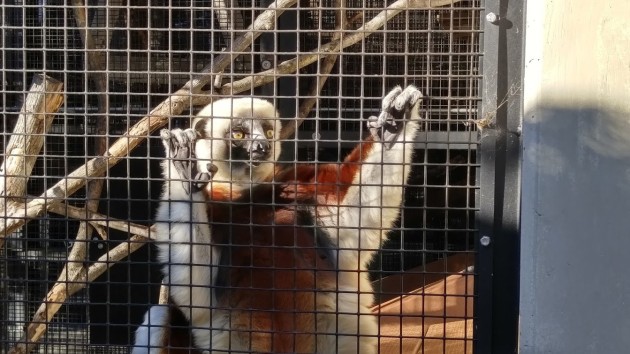 He’s a Coquerel’s Sifaka – the same type of lemur on the children’s program Zoboomafoo. A program which, I realized, I watched a lot of in college, usually while hungover. (Chris explained that the live-action lemur featured on that program was actually born and lived at the Duke Lemur Center. Named Jovian, he died in 2014 at the age of 20. His offspring still live at the center, including a granddaughter born last year. Click on that link only if you want to see a baby lemur. Which you absolutely want to see.)

Please note that most of my lemur photos are terrible for several reasons. 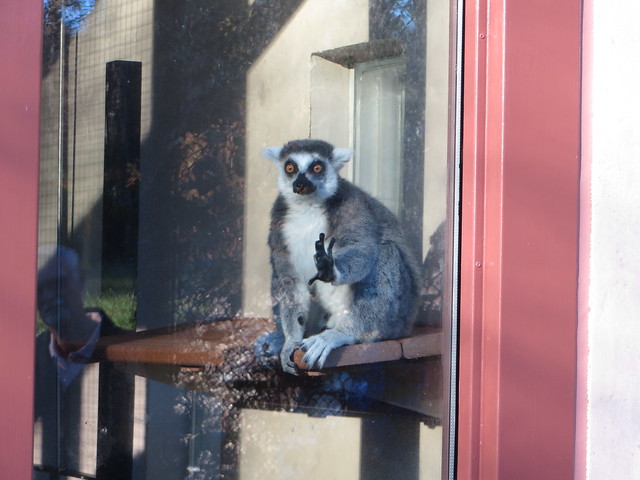 HE IS REACHING OUT TO ME BECAUSE HE KNOWS I LOVE HIM AND HE WANTS TO BE FRIENDS. 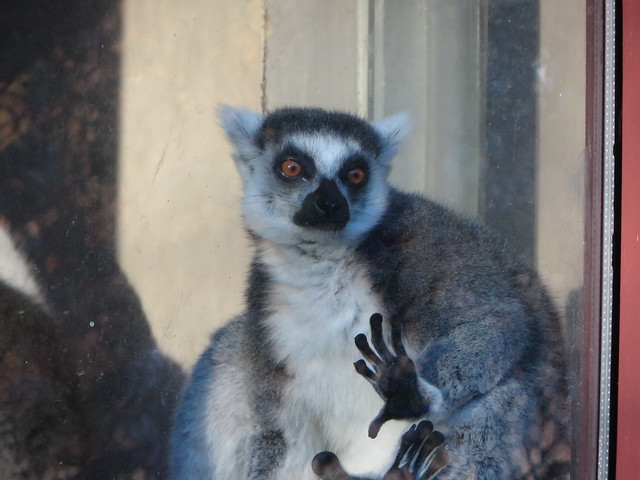 (Any halfway decent photos are courtesy of Rand.)

This ring-tailed lemur had lost his tail at an early age. When lemurs are small, they cling to their mothers, and apparently his had gotten into an altercation while he was clutching her chest. His tail was injured and had to be amputated. Fortunately, even though lemurs use their tails for balance and stability, the loss of his hadn’t had any impact on him. He was incredibly fast – according to Chris, much faster than his other tail-bearing counterparts. 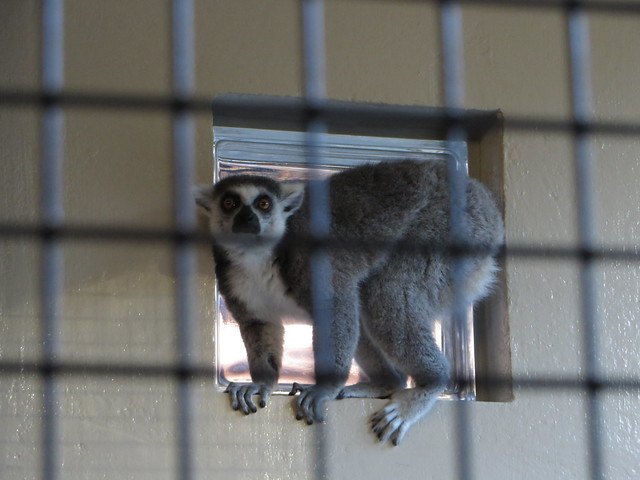 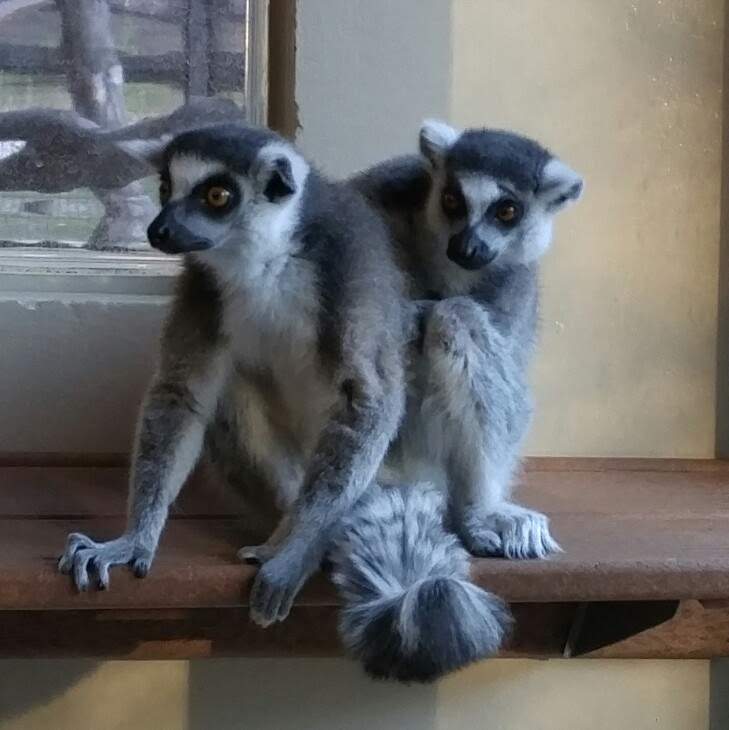 And his lack of a tail did not impact his swagger AT ALL.

The tour ended, sooner than either of us would have liked, and the group dispersed. Rand and I were halfway to our car when Chris stepped out of the center and called us back.

A wee bit of background: Rand had given a presentation earlier that day to a group of online marketers, and he’d given a shout-out to the Duke Lemur Center for doing a great job of curating online content (which, really, they do. Check out their Instagram feed if you want to see photos and videos of adorable baby lemurs WHICH OMG YOU WANT TO SEE). Chris, who also manages the center’s social media, noticed an influx of new tweets and followers, and traced it back to Rand.

Now, normally Rand eschews special treatment, and you all know that I don’t accept freebies. But neither of us were going to say no to an offer to get a better look at those faces. Everyone has their price. Ours is lemurs.

So we headed back to the habitats, and got better acquainted with a few of the residents of the Duke Lemur Center. 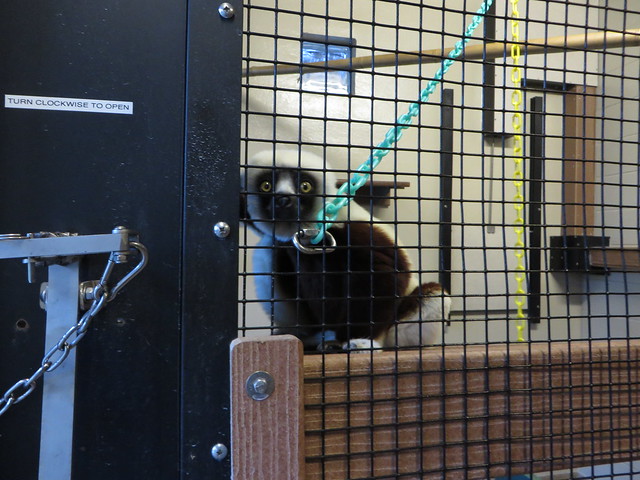 There was still no cuddling. Apparently that’s frowned upon. But there was a lot of curious staring. 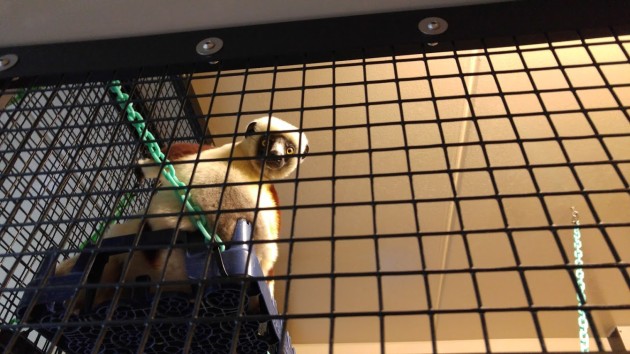 This guy was my absolute favorite. His name was Olivier, and he had lost all of his teeth due to old age (he was in his 20s!), so his tongue perpetually stuck out and his fur was greasy because he was unable to properly groom himself. I love him. 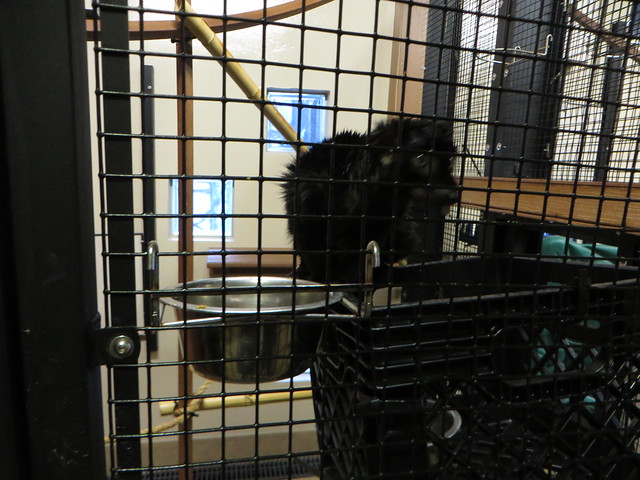 He was munching on some food, so it was hard to get a clear image of him.

I thought he looked a lot like Sir Didymus from Labyrinth, but with fewer teeth. (Actually, most of the inhabitants of the lemur center look like Jim Henson creations.) 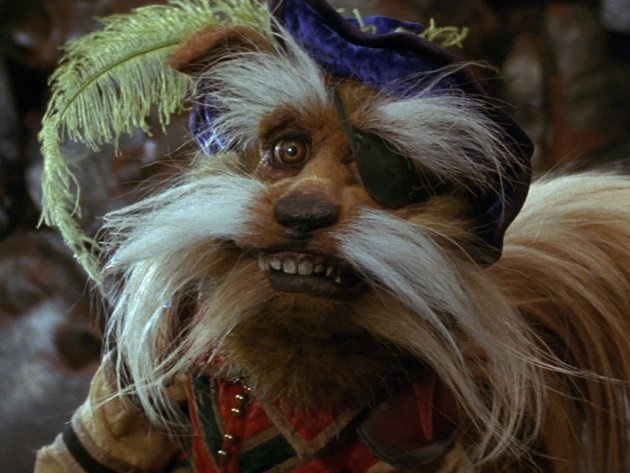 Except Didymus had teeth.

I wanted to take him home and love him forever and ever, but that is also not allowed.

That’s probably the most frustrating experience about the Duke Lemur Center – the tour teaches you a lot about them, but you can’t get up close and snuggly with any of them. Which is only right – these are, after all, animals. They do not exist to entertain us. Their purpose on this earth is not to snuggle us for long hours while we scratch their fur and speak to them in non-sensical phrases.

But if that branch of science ever opens up, I plan on being an expert in the field.