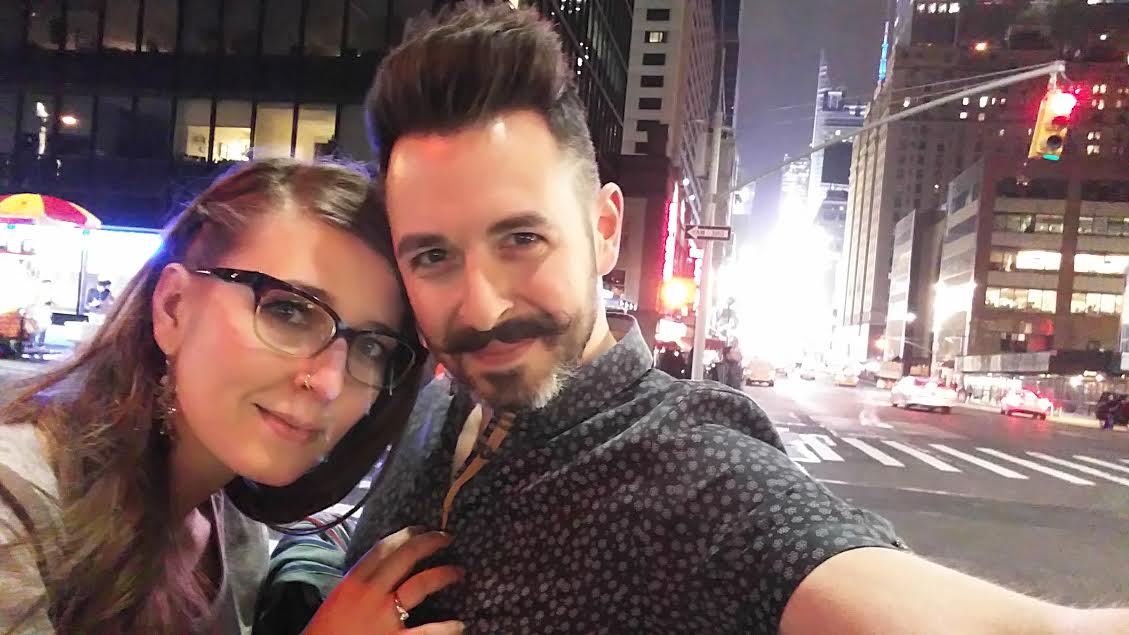 Me and Rand after seeing Hamilton.

When I was a senior in high school Titanic came out in theaters and it seemed that every single one of my classmates was losing their minds and their virginities over it.

Eventually I was duped into watching this icy retelling of Romeo and Juliet at the drive-in by a friend who told me we were going to see Austin Powers. I would later find that he had similarly misled numerous others in our group because he wanted to see the movie for a fourth or fifth time and didn’t want to go alone. We repaid his dishonesty by shouting unsolicited advice to Leo and Kate.

For those blessed few who managed to escape its reach in the late 1990s, let me tell you: Titanic was a terrible film.

This was my first experience with populism, and the perverse pleasure that comes from rejecting it, from hating that which everyone else inexplicably loves. I’ve done this again and again in my life. The New Kids on the Block. Titanic. Doritos. The Book Thief. Whatever the fuck Dubstep is.

So you’d imagine that with all of America fainting in a puddle of its own urine over Lin Manuel Miranda’s musical, Hamilton, that I would want nothing to do with his opus and have absolutely no desire to spend hours staring into his eyes (which are the precise shade of brown usually found on frightened baby deer).

I certainly wouldn’t spend the last six months listening to the soundtrack ad nauseum, right? Or make Rand agree that if either of us got a book deal, we’d buy tickets to see the show on Broadway. With the original cast. From the sixth row, no less. AND HAVE LESLIE ODOM, JR., LOOK RIGHT AT ME AT LEAST THREE TIMES DURING THE PERFORMANCE SO THAT EACH TIME IT FELT LIKE MY SOUL WAS EVAPORATING.

Such behavior would not be in line with someone who refuses to buy Apple products and doesn’t really understand what’s so great about Ryan Gosling. But I suppose its nice to find that sometimes you can still surprise yourself. 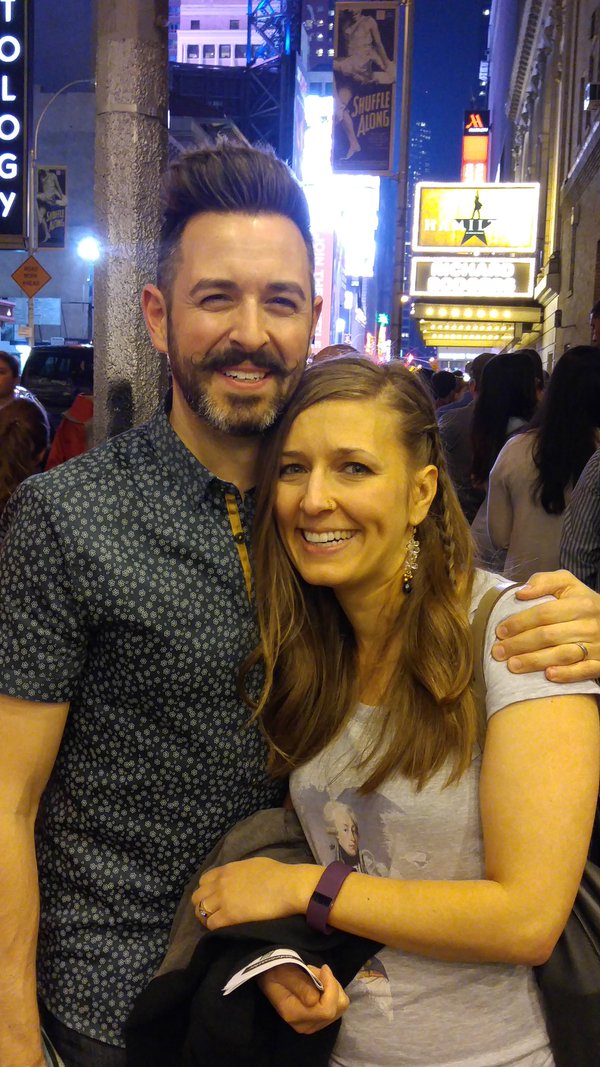 Should more proof be required of my utter fanaticism, please note my shirt, which features both the Marquis de Lafayette and Daveed Diggs, who plays him.

I’ve been hesitant to talk about the show for several reasons. The first is that if you are following along with the story of my life, this whole motif of the semi-incompetent, awkward, big-nosed girl having everything go her way is probably wearing thin. If I encountered this narrative in a book, I’d have thrown it across the room by now. Because … ugh, just no, okay? Just no.

And secondly, EVERYONE HAS ALREADY FREAKED THE FUCK OUT ABOUT HAMILTON. Countless others have seen the show and written about it with a skill that eludes me. They did so while addressing issues far more complex and important than my affinity for history and hip-hop and men with dark, twinkly eyes.

But then Rand told me – as we walked through a winter’s night in Manhattan that was so warm it felt like an August evening come unstuck in time – that I had to write about it.

“Honey,” he said, laughing at the momentary monetary madness that overtook us in purchasing the tickets, “when you spend that much for 3 hours – you can’t not.”

And so, at the risk of treading where so many have already, let us talk of Hamilton.

For those of you who are somehow unfamiliar with the show, I salute you in your efforts to live apart from society, presumably in a cave, on Mars, with your eyes shut, and your fingers in your ears (even my mother’s heard of it by now). The musical traces the story of the life of America’s first Secretary of Treasury, Alexander Hamilton, whose childhood was Dickensian even before Dickens existed. Orphaned and abandoned at a young age (an illegitimate child born in the West Indies, his mother died when he was ten, his father having split a little while earlier), Hamilton displayed an extraordinary mastery over the written word. He eventually accrued benefactors who collected money for his education in New York. In his new adopted homeland his talents would make him indispensable to General George Washington, and he would secure a place on his staff and become a notable player in The Revolutionary War. He also started the first national bank, founded the Coast Guard, and helped achieve ratification of the U.S. Constitution by writing 51 of the 85 installments of The Federalist Papers.

Oh, and he was at the center of one of the country’s first sex scandals, which he eventually wrote about in order to clear his name (with middling success. He proved he wasn’t corrupt; just lecherous). Charming and caustic, Hamilton fulfills every prerequisite for a great, tragic hero, but is overlooked in most historical narratives. Most of know of his death – at the hands of Vice President Aaron Burr – but not the circumstances that led up to it.

The show is notable not simply because the story is entertaining as hell (which it is), but because of how Miranda has chosen to tell it. The tracks span everything from rap (which is how the story of Hamilton’s early life and the Revolution are told) to Britpop-inspired ditties (apropos for King George III) to scores that strongly suggest the influence of musical mainstays like Les Mis. The mix is hardly remarkable for those of us with music subscription services and eclectic tastes, where Biggie may comfortably reside on the same playlist as Streisand (I envision the two of them on a hammock, swinging in a beam of sunlight), but unheard of on Broadway. And like so many things, Miranda forces us to question why that is so.

Because, truly, what better medium for the heated debates between Thomas Jefferson and Alexander Hamilton than a rap battle?

Also of note is the show’s casting, which places men and women of color in virtually every role. As a long-time fan of the Oregon Shakespeare Festival, an organization that focuses on diversity in casting, I laud this act, but don’t consider it revolutionary (pun not intended). If Pericles and Nathan Detroit can be men of color, then obviously our Founding Fathers can be as well. But perhaps context is key here – and the message that accompanies Miranda’s casting is this: the story of America belongs to all of us – we need not be white, or male, or even native-born to embrace it. This is a country built by immigrants and people of color.

As I watch a video of a Trump rally in which one supporter screams, “If you don’t like it, go back to Africa!” it becomes clear to me how important and timely Miranda’s message is.

I am tempted to wax poetically about the performance itself, and how much I enjoyed it, but as I noted earlier, there little left to say about Hamilton that has not been already said. Not even my favorites are unique – at this point, I share my unrequited crush on Daveed Diggs (who plays both the Marquis de Lafayette and Thomas Jefferson) with the better part of America. President Obama’s remarks on the show (after the cast was invited to the White House to perform selected tracks just this week) are more eloquent than anything I can muster, and I recommend you listen to them (along with the cast’s performance).

The President states that this is, ultimately, our story. It belongs to all of us. Having always considered myself an outsider due to my family’s immigrant status, this message hit me hard. Growing up bilingual, the first one in my family to have been born in the New World, I’ve always wondered whether or not I had any claim to America. I’ve always questioned whether or not it was mine, and having spent the better part of the last decade on the road has made this doubt grow even more.

When I tell people I’m American, they instantly dismiss it.

But Miranda’s message has worked its way into my bones. 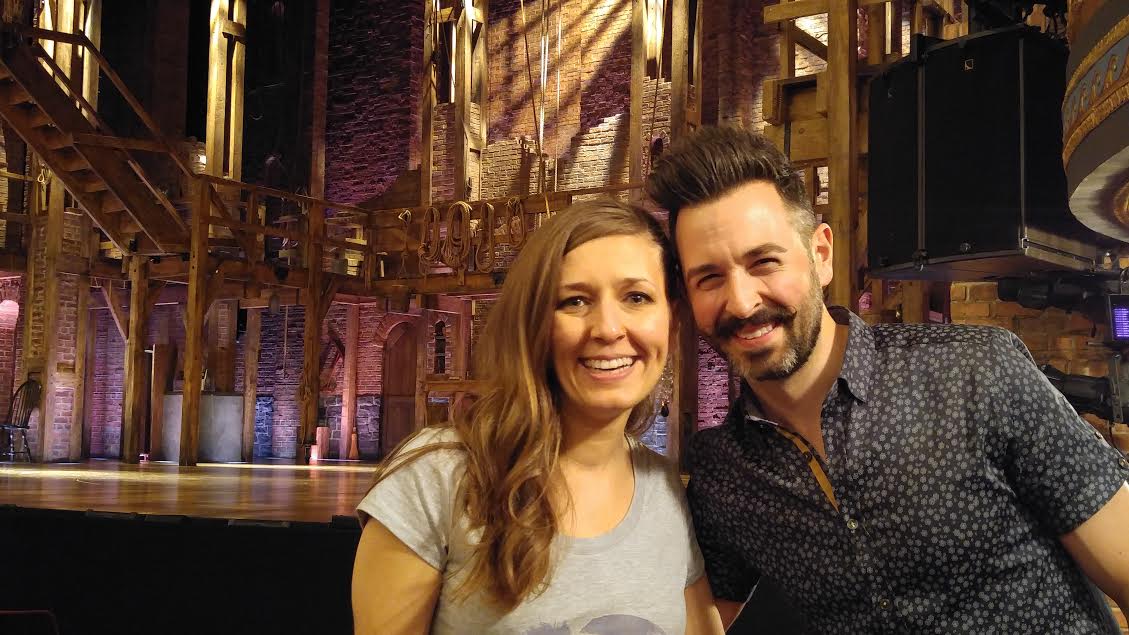 This morning I find myself in Bavaria, staring out onto the hills that surround our hotel as a light snow begins to fall. I am visiting my father. Russian born, and having lived in Germany for more than 30 years, he minces no words. “I’m an American,” he tells me, as though suggesting anything else is absurd. That is where he spent his formative years, on the lower east side of New York, before he was old enough to enlist in the U.S. Air Force, an organization to which he dedicated his entire professional career.

Immigrants. We get the job done.

As the snow begins to fall more steadily on the German countryside, I find myself missing home. And I realize, for one of the first times in my life, that I have absolutely no doubts where that is.

P.S. – Blame and thanks for my current musical obsession and this unprecedented surge of patriotism lie with my dear friend, Ruth Burr Reedy. And no, that surname is not coincidental. I take so much pleasure in telling anyone who will listen that the woman who introduced me to Hamilton is, indeed, a distant relative of villain and narrator Aaron Burr. Thank you, Ruth. You are the Madison to my Jefferson. An email with all the details of the show is forthcoming.