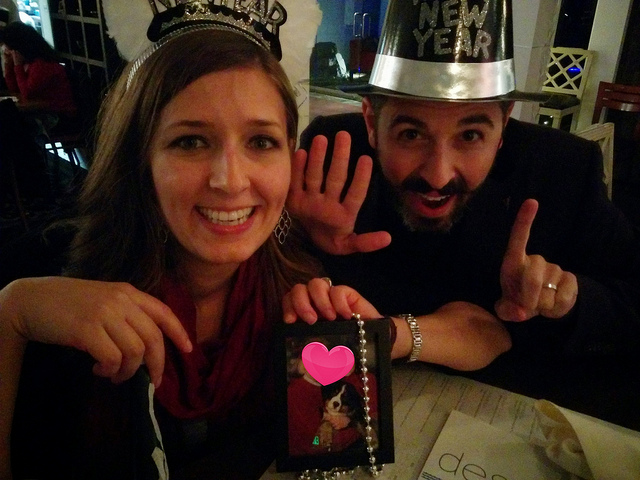 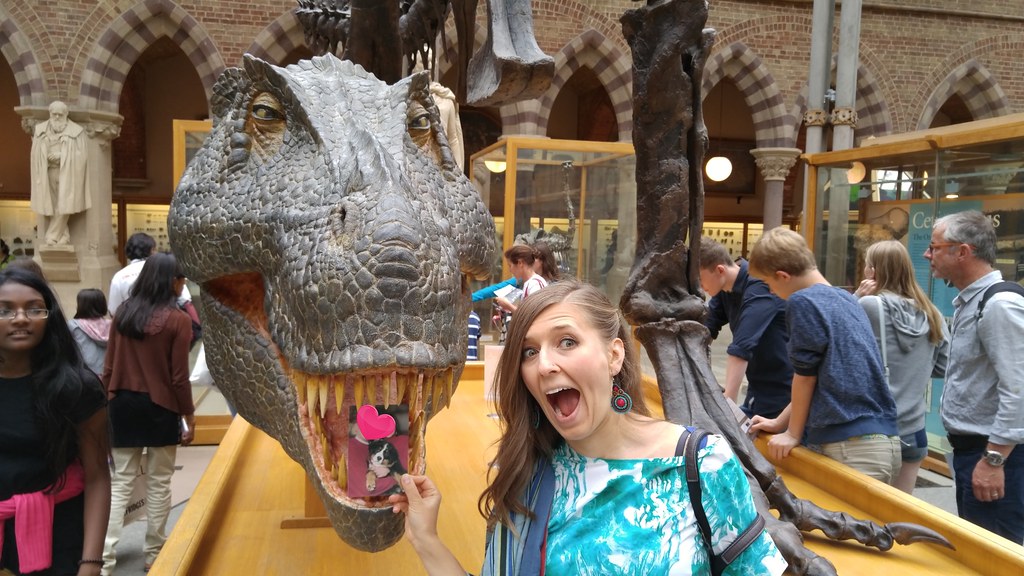 Believe me when I tell you, as unlikely as it sounds, that we did it out of love. In the end, anyway. When it started, it wasn’t quite that. It wasn’t that we didn’t love Tim; we do, we did, we probably always will, for his genuine enthusiasm at everything, for the cadence of his laugh, for his willingness to be photographed in an ill-fitting wetsuit. But when we began the prank that would dictate our 2015, the one that became the worst-kept secret of the year, known to nearly everyone in our lives except for Tim, our goal was more to mess with him than anything else.

But, like an overlooked mole or the career of Vin Diesel, it eventually grew into something far bigger than we could have imagined. We told people all across the world about our project; people in foreign countries who’d never met Tim felt like they knew him. He tied all of us and all of this Timfoolery (as we had taken to calling it) together. He became a recurring motif of our year. And when we tried to tried to pinpoint why Tim had become our target, it boiled down to simply this: he’s always good for a laugh. Even if the laugh comes at his expense. 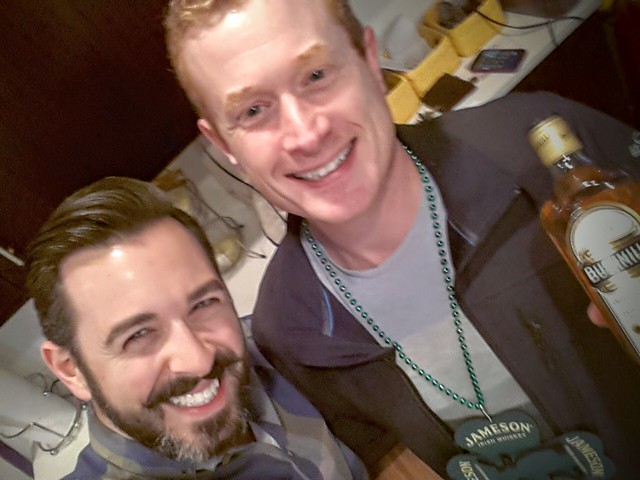 Rand with a totally unsuspecting Tim on St. Patrick’s Day.

In the end, when we finally revealed what we’d done, he did laugh. Along with it, I hope, came the realization that he was loved. Because you don’t make someone the target of a year’s worth of mocking unless you care, right? Of course not.

But I get ahead of myself. I need to start at the beginning, more than a year ago, in December 2014. We were visiting Tim and his wife, Alyssa, for Hanukkah and as Tim was frying latkes the story of the photo came up. The image in question was one of Tim’s father and Tim’s (former) stepmother, taken in matching Christmas sweaters, a Bernese Mountain puppy sandwiched between them. (I’ve covered up their faces in this post to preserve some measure of anonymity, though their dog received no such courtesy.)

It remains etched on to my retinas, though. I see it when I close my eyes. I see it in my sleep. The image haunts me. The torment is my doing. There is no one else to blame.

The framed photo had been a gift from Tim’s dad, and devolved from there into a sort of personal joke between Tim and Alyssa. They would hide it in various places for the other to find. She would get up early to go to yoga and there it was, sitting on the passenger seat of her car. He’d take a business trip and as he was unpacking his suitcase, it would come tumbling out.

On that night in December, while Tim’s back was turned, I quietly asked Alyssa if I could take the photo. She nodded, and I slipped it into my purse. That’s how it started. Rand and I, taking a framed photo with us on our travels and documenting its adventures; a perverse, maniacal, occasionally drunken version of Flat Stanley.

I tried to pinpoint when, exactly, the whole thing got weird, and I realize that it was weird from the beginning. It took approximately 15 seconds for Rand to develop an unnatural attachment to a formal portrait of two people we’d never met and their dog. 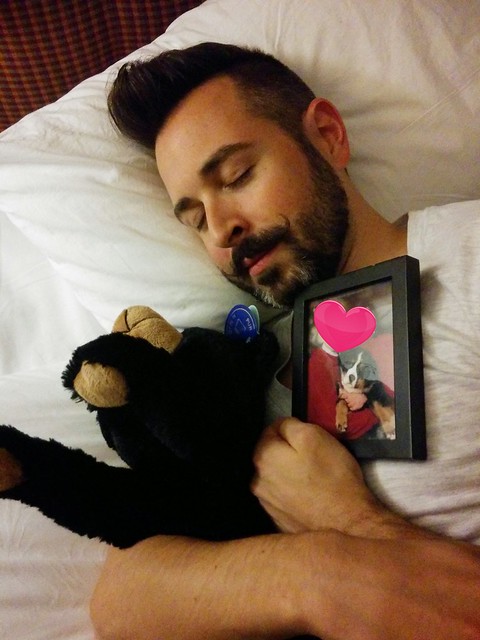 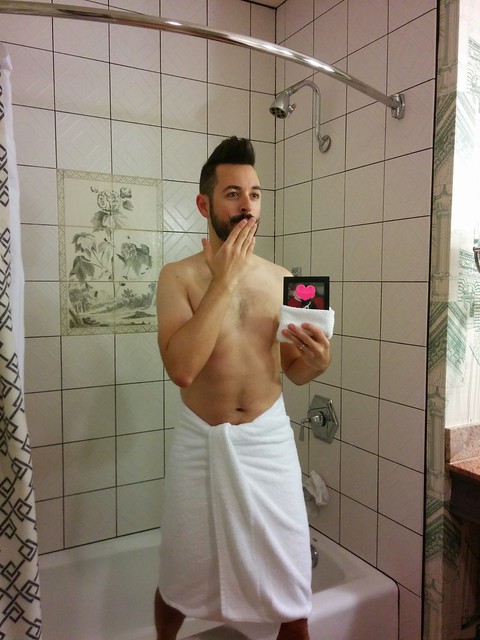 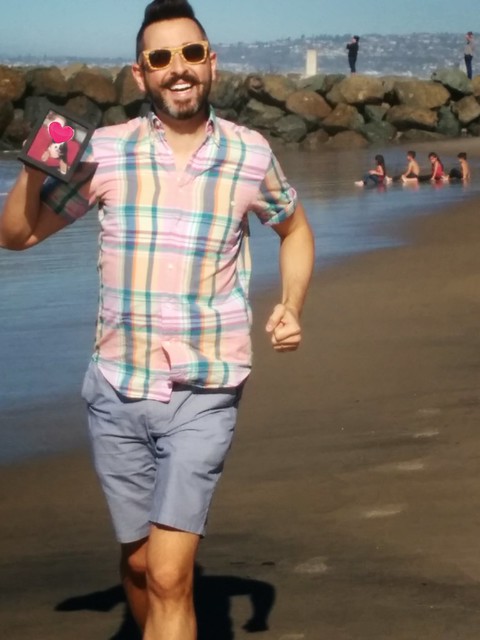 He looks utterly demented here. I don’t know if I’ve ever loved him more.

Eventually, Alyssa would email Rand saying that she needed the photo back, lest Tim notice it had disappeared. Before returning it, we made a copy, and the journey continued with that facsimile of the original. We referred to it simply (if inaccurately) as “Tim’s parents.”

“You know who would love this?” one of us would say.

“TIM’S PARENTS!” the other would scream in reply. And then we’d take out the photo and pose with it. We’d gone mad. 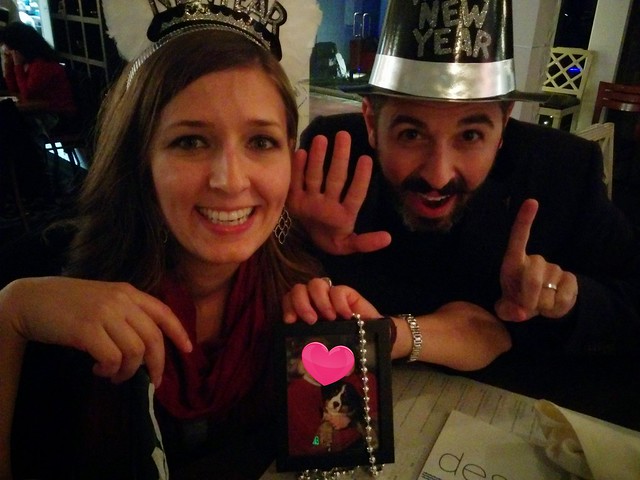 We made friends and loved ones participate as well. 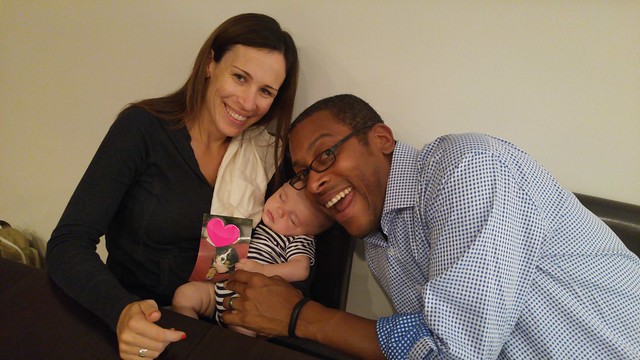 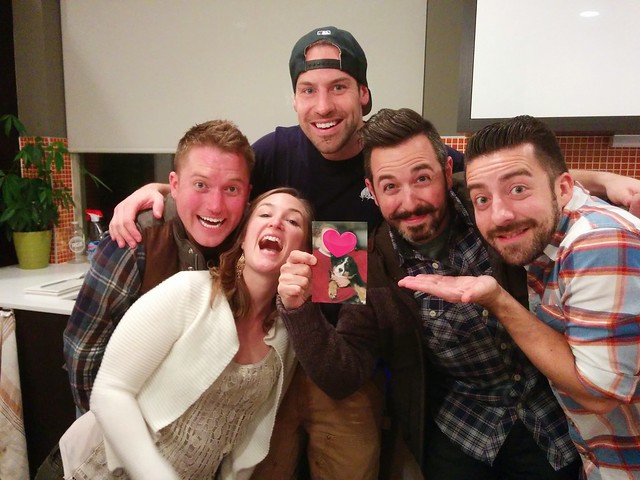 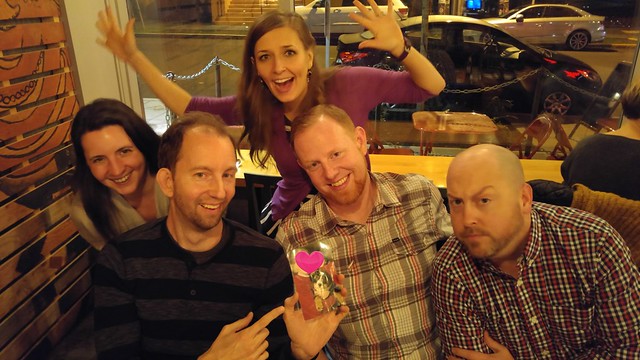 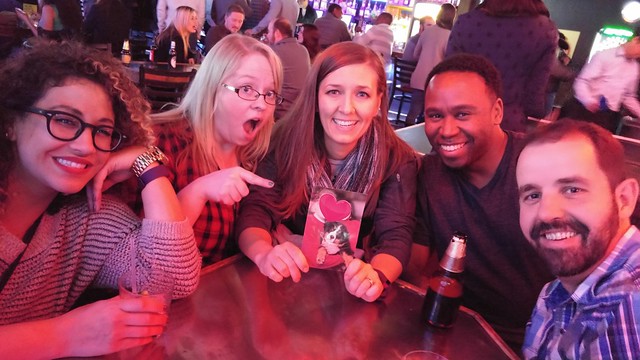 Did we take any photos of the six of us that weekend? NO. But we managed to get a snapshot of us and Tim’s Parents. Of course.

“Oh, okay.” It’s amazing how easily they all jumped on board.

This photo somehow didn’t make it into Tim’s album, but it’s my favorite: Rand, our (and Tim’s) friend Matt, and me at dinner, after I’d suggested we all look inexplicably shocked. 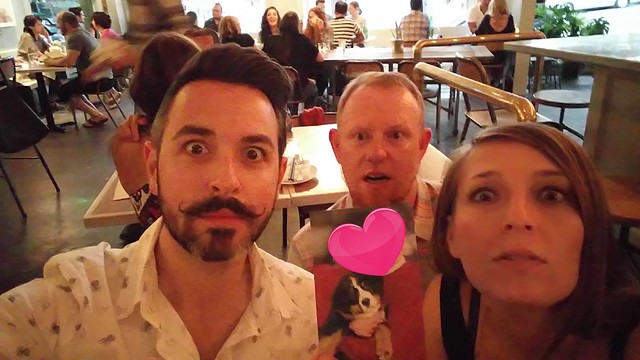 We took the photo of Tim’s parents to Ireland, England, Italy, Germany, and Spain. We dragged it with us to New Jersey, New York, Pennsylvania, California, Florida, Oregon, Texas, Oklahoma, and North Carolina.

Here it is at the World’s Fair in Milan. 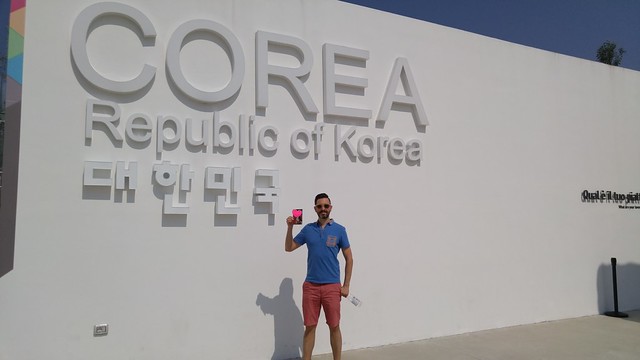 In Stratford upon Avon, at the house in which Shakespeare was born, and his grave. 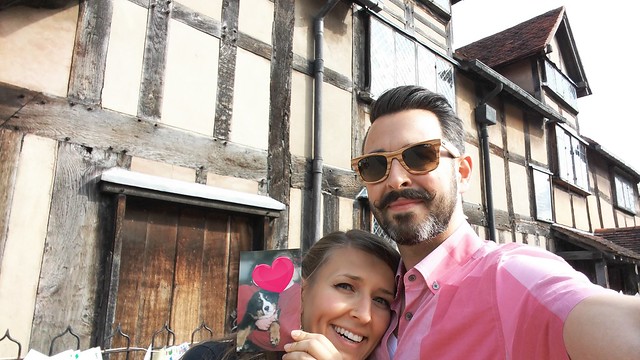 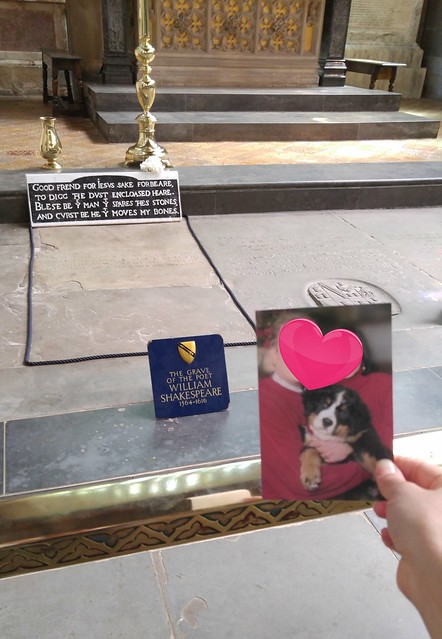 At Jane and Stephen’s wedding in Wallingford, England. 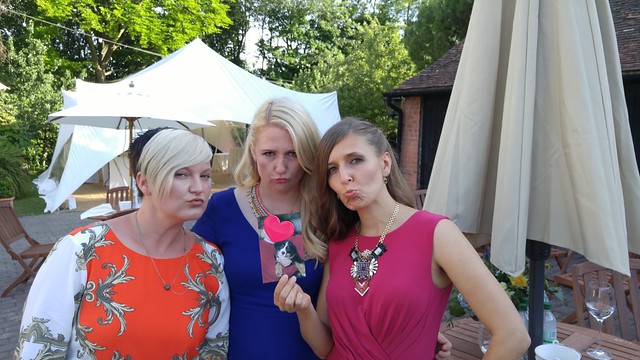 On stage at Benaroya Hall in Seattle, when someone was crazy enough to let me MC an event (I remain hopeful that most of the attendees were drunk and remember nothing). 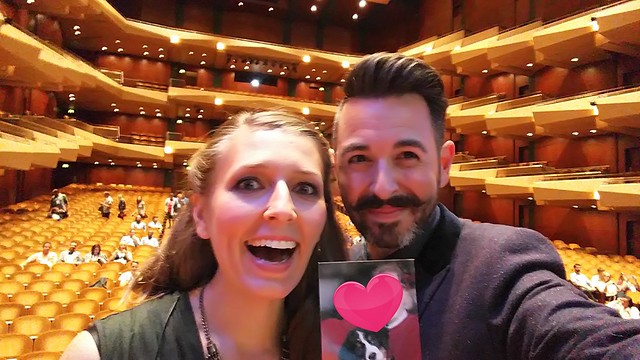 At the Cliffs of Moher … 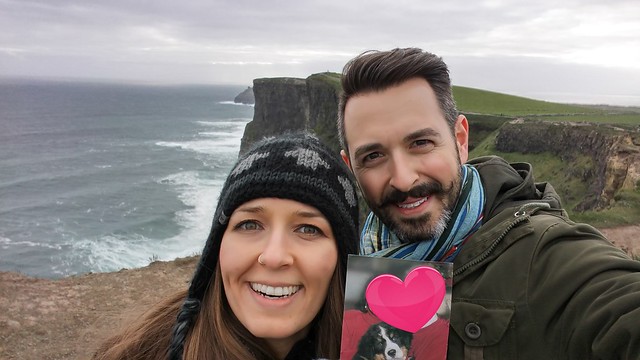 While we were eating paella in Spain … 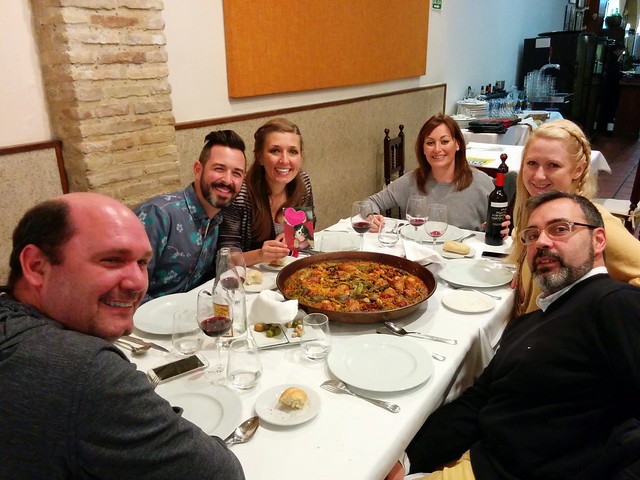 Visiting a Banksy in London … 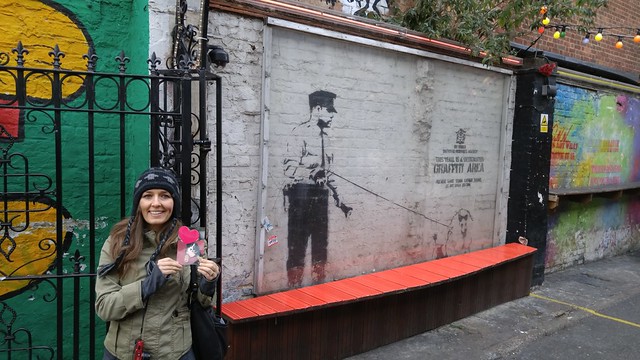 And a piece of the Berlin Wall in North Carolina. 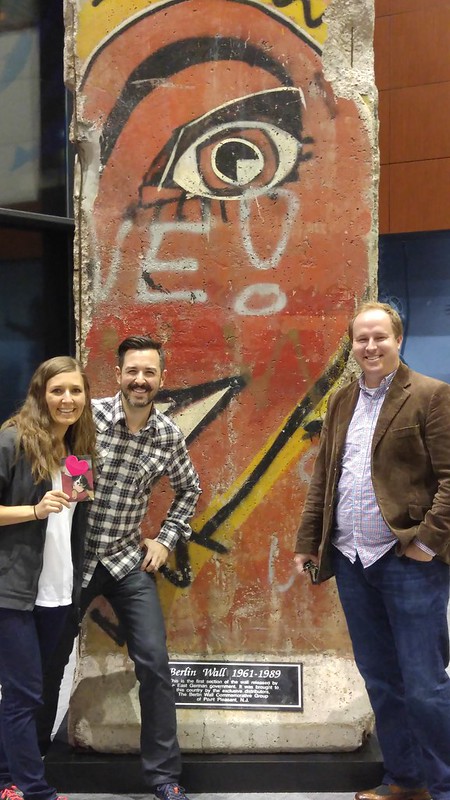 A lot of times, the resulting photo was a totally romantic snapshot of the two of us … and Tim’s Parents. 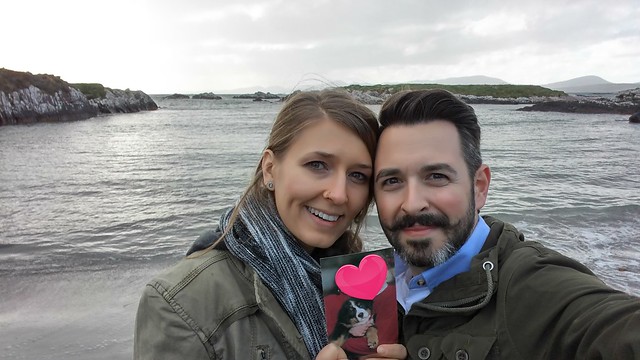 We compiled the pictures (more than 100 in all) into an album and gave it to Tim a few days before Christmas. We watched as he opened the cover, and slowly began to process that we’d spent an entire year schlepping around a photo of his family members. Finally, after uttering “What the hell?” and “Oh, my god” a half dozen or so times, he laughed.

I think he liked it. I hope he did. Because when tried to explain our motivation, it came down to one thing: we loved him. 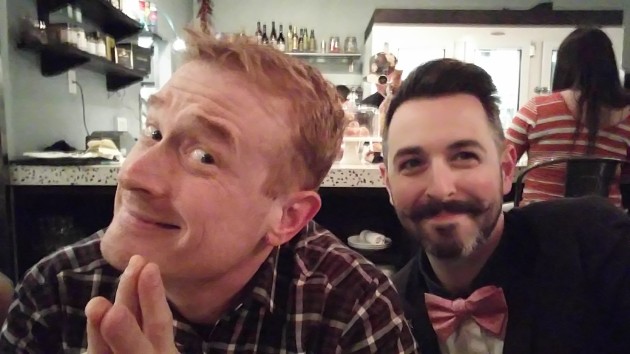 Tim, giving us the “You are all insane” look.

We just have a funny way of showing it.