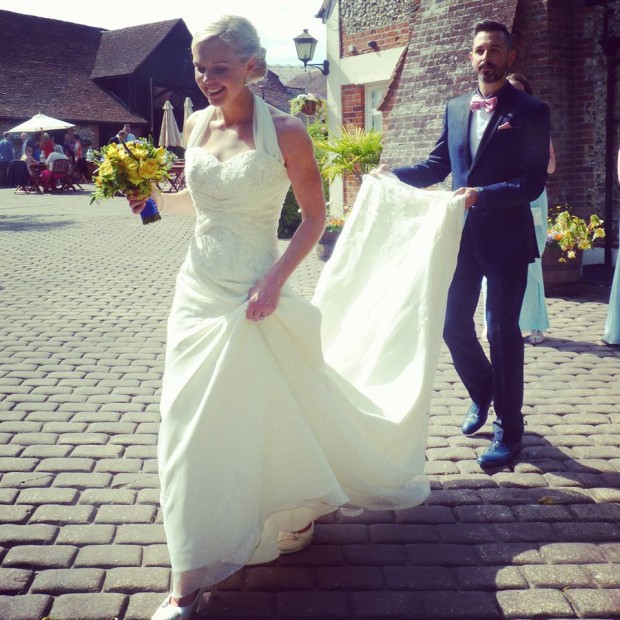 I like watching history unfold. I am understandably fascinated by those moments that dominate the headlines, that will become fodder for essay questions in college classes a hundred years from now. The time we landed on the moon. The time communism fell. The time Obama was elected.

My affections do not end there, limited to the grand scale narrative of humanity. I love those moments that are personally significant – historical, but perhaps only in microcosm. The events that would get whole chapters in the history books of our lives. The things we will remember forever and ever, even if we are the only ones that do. 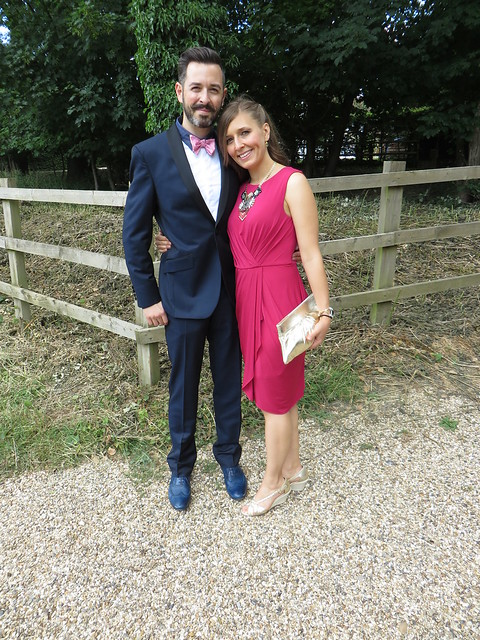 The time we failed the driver’s test. The time we fell in love. The time that Stephen and Jane got married and we screamed Bon Jovi lyrics to the heavens and the cabs never came. 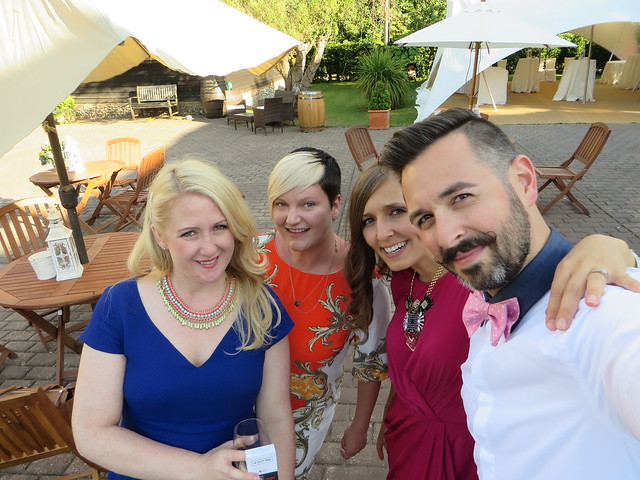 I should be telling you about the World’s Fair in Milan. Rand’s been at me for a month to write about it, and I told him I would, but here I am, doing precisely not that. Forgive me, beloved – right now it feels too impersonal, and I’m not really invested in what felt like a school fair featuring projects from the tourism boards of various countries.

Right now, I am far too engrossed in History 225: Nuptials of Dear Friends in Foreign Lands.

Of course, history requires one to be objective, something which I’ve always had trouble with. But small scale history is more lax in this regard. Behold: 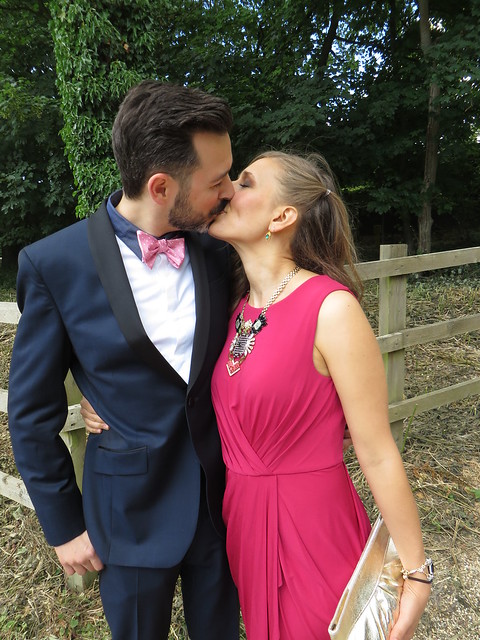 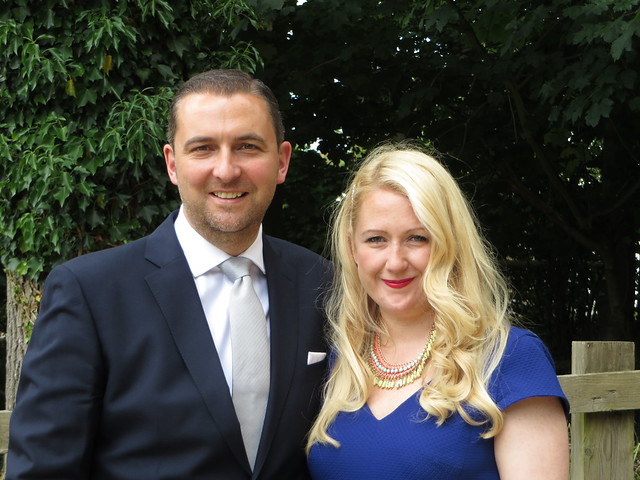 And Jon and Lisa.

This is a subjective statement.

But I would also argue that it is historical fact.

These events were important: The domestication of livestock. The Renaissance. The Industrial Revolution.

As were these events:

My husband, insisting that bridesmaids get to do all the fun stuff, and carrying the train of Jane’s dress in an act of defiance.

Jane, looking like a movie star. Though let us be fair: in the story of Jane, this is a recurring motif. 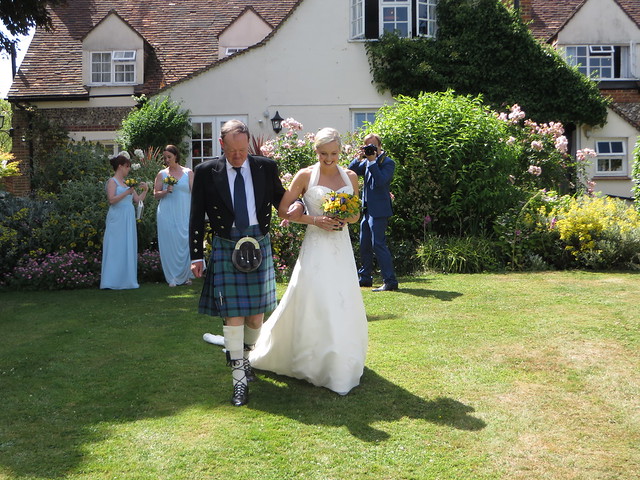 And Stephen looking … well … (Are you marking this in your diary, Stephen? Because here it is …) 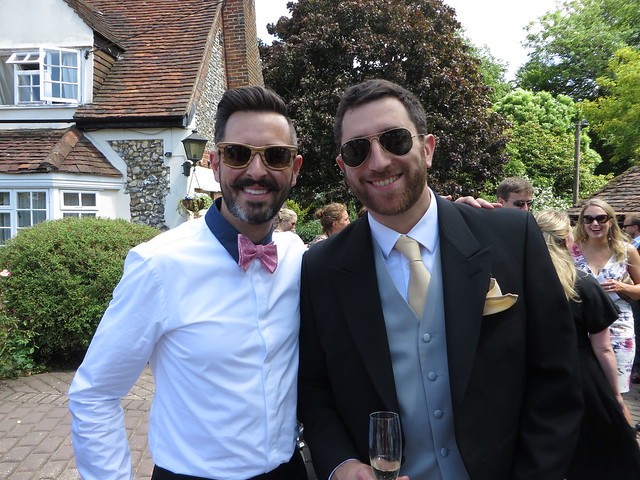 I am what is known as a primary source. I help maintain historical accuracy. I can tell you what happened that day, because I was there.

(Listen carefully. This will be on the final exam. I’ve included a few sample questions to serve as a study guide.)

I struggled to take a photo of myself and Kate. Kate, who, let it be known for all posterity, cannot take a bad picture. Kate, whose eyes are not the color I thought they were. They are indecisive. 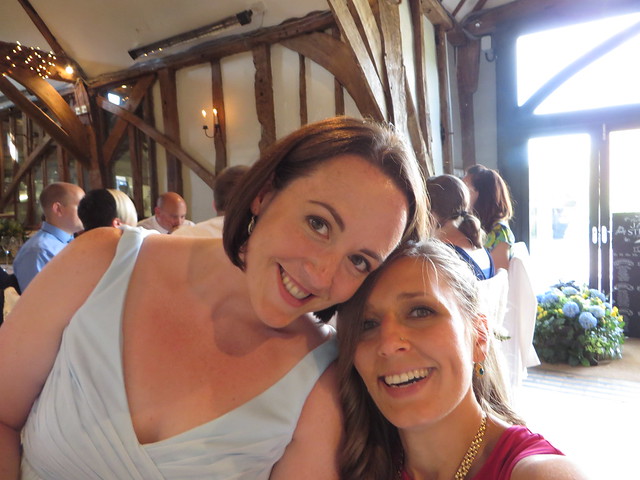 What color are Kate’s eyes?

There was sunshine in England, and it was hot, so we vied for the shade and asked for ice in our drinks.

Lisa and I looked like we’d coordinated our outfits, primary colors and hefty necklaces and side-parted hair.

True or False: Lisa and I planned this. 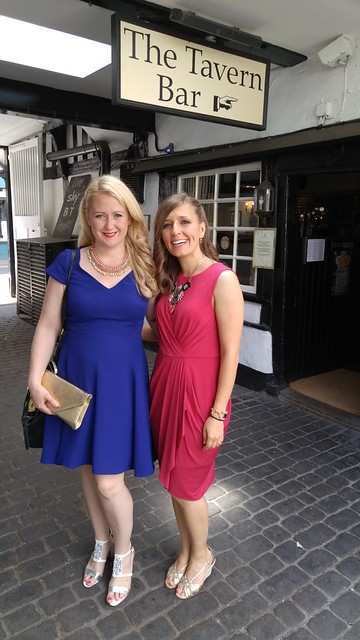 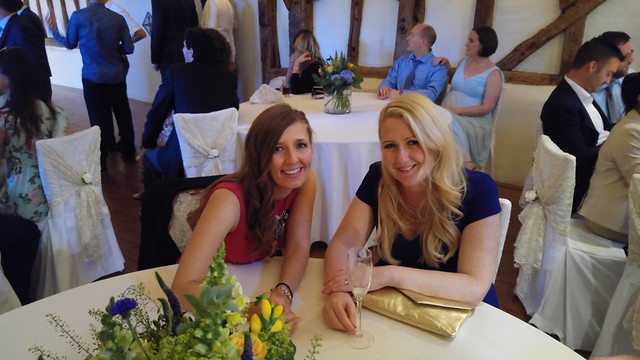 I would spend the night trying to figure out which screen siren she reminded me of, and the answer would hit me days later. Veronica Lake.

The groom made a brilliant speech. The best man read a text from Ciaran and Cathy, sending best wishes to the new couple. I remembered the last time we were all together in one place. 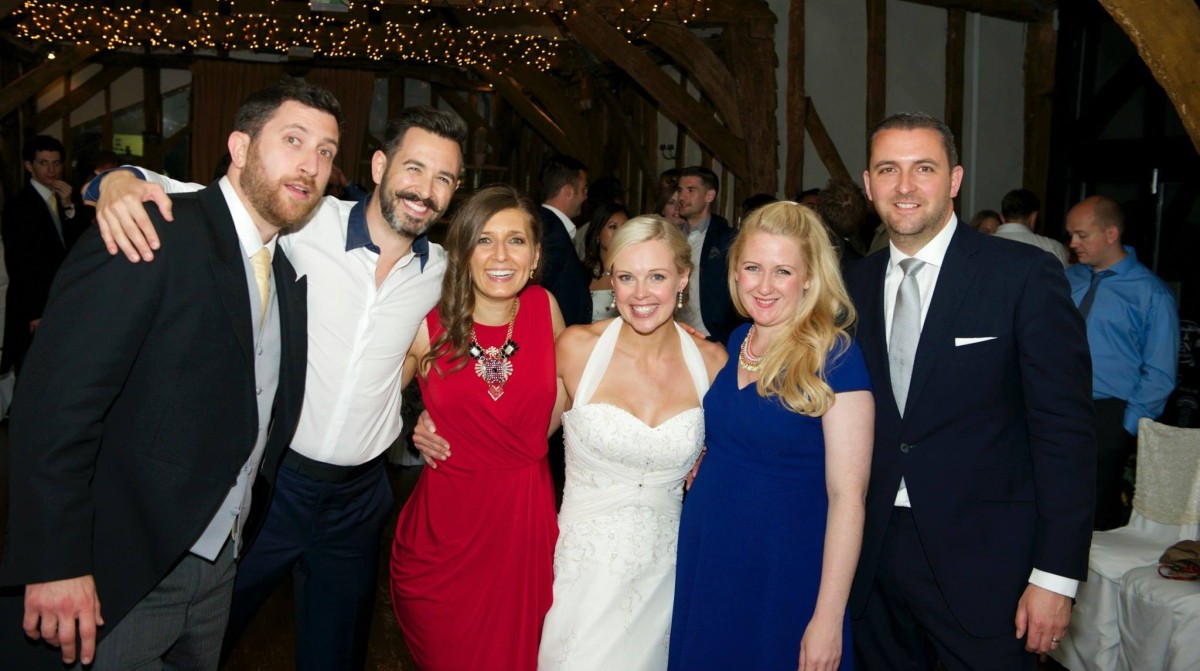 I was hit by that acute, wonderful longing that comes with seeing old friends, followed by something else that was almost antithetical to it. I had trouble identifying it at first – for those of us who were nerdy and awkward in our formative years (and remain so even now) it remains rare: a feeling of belonging. That there was no place I needed to be but here.

The transcript of my memory is not complete. I have no idea what is being discussed in this photo, but it makes me laugh nevertheless: 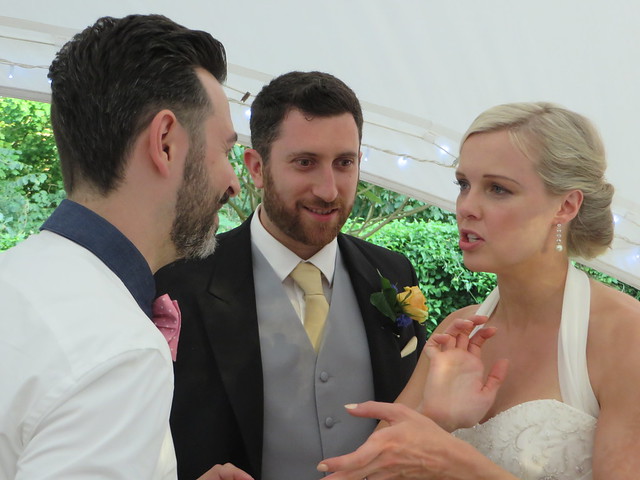 Some things are lost to time. Some things were blurry, even as they happened. 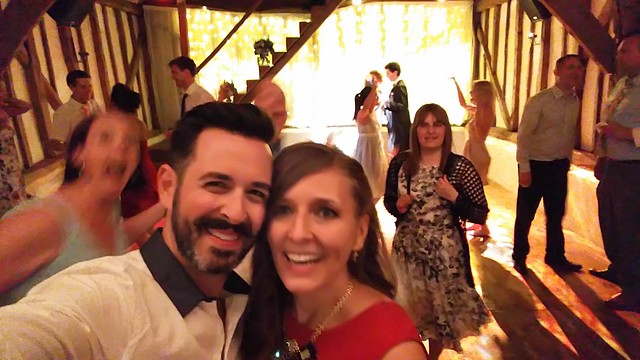 This photo is rad because Kate and Heather are in it.

I think we were singing “Summer of ’69” in the photo below. I am not certain. 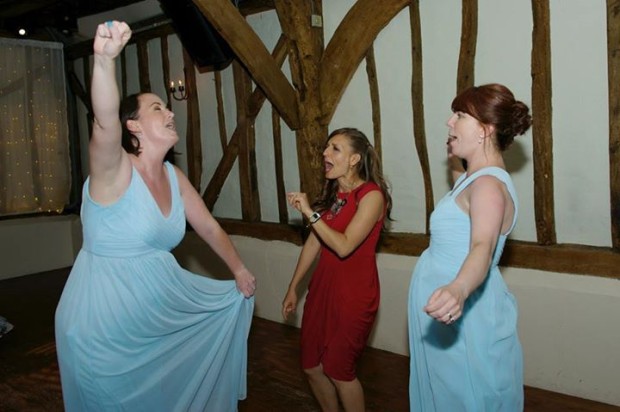 It might not matter. The important part was that we sang.

And that my beloved sang to me. 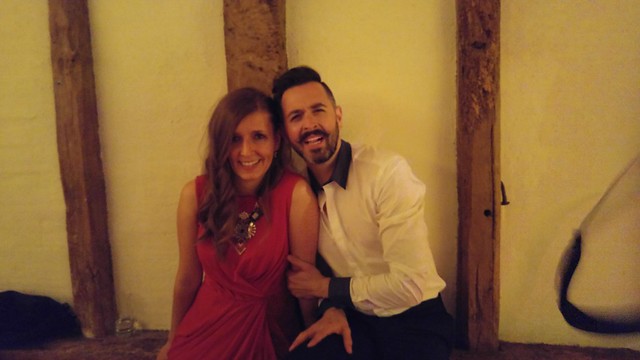 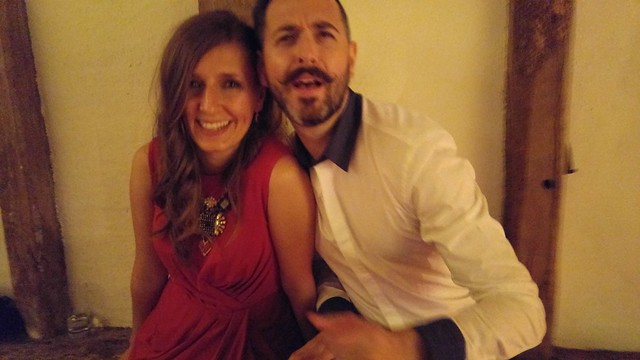 We watched history unfold. Jane’s and Stephen’s. Ours and theirs. 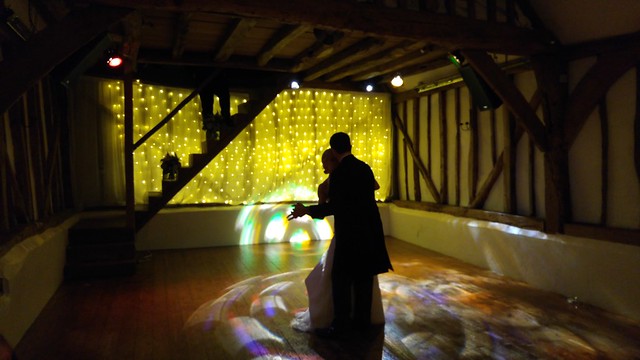 I thought of the day Rand hired Jane. I remember him calling her to give her the news. She was 23, I was 25, Rand was 26. I remember how she hugged me after Rand had proposed. When she told us she was moving to London. When I learned that she and Stephen were dating. And having a baby. And getting married.

I flipped through the pages. The end of one chapter, the beginning of the next one. Just one small part of one volume of The History of All of Us.

Sometime during the wedding reception, the shuttle service that Stephen had hired called and cancelled. The out-of-towners – us among them – had no way to get back to our respective hotels. The night would wind down, and the staff would lock up the venue. We were left outside in the cold and dark, vainly calling cab companies that promised to send cars, but never did.

The groom refused to leave us. Good captains do not abandon their sinking ships. Or their drunken, stranded friends.

The only light came from a spacious single bathroom, which the staff had mercifully left unlocked before they went home. Cold, tired, and seemingly forgotten, we did the only sensible thing: we had a toilet party. 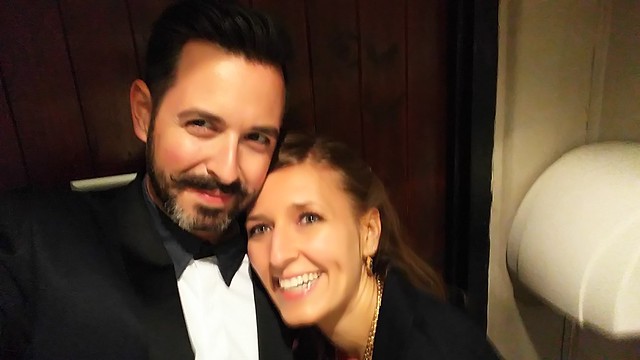 Yes, we were in a toilet. Yes, we took a selfie. No, there is nothing greater than this. 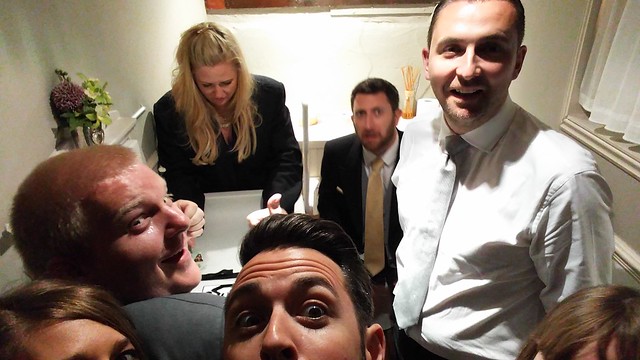 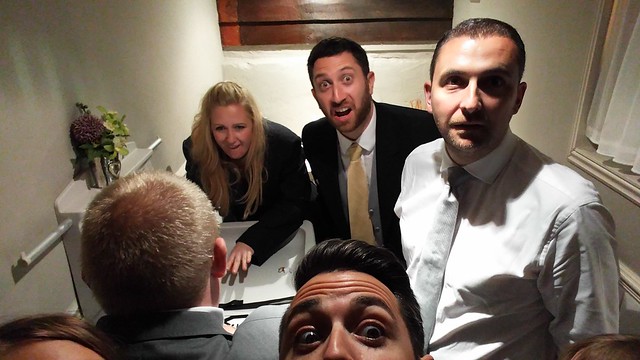 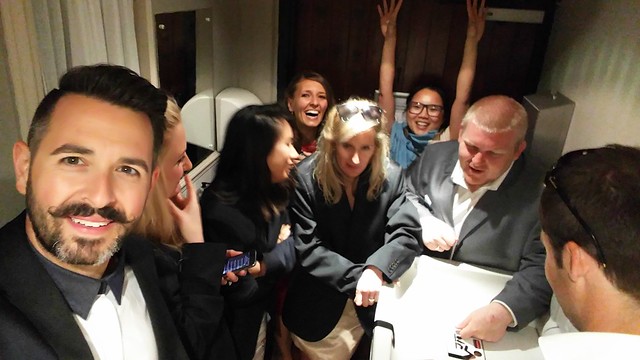 I ran the hand dryer until the room heated up a little. Lisa tried to fire up Spotify on her phone, but, due to technological limitations that are still unclear to me, could only play songs from early 90s.

Forgive me, Jane and Stephen. I am now convinced that your wedding song is “Straight Up” by Paula Abdul. It has now been recorded for all perpetuity. What an odd choice for the two of you.

The soundtrack was tinged with nostalgia; I was reminded of middle school dances and forgotten locker combinations while I danced in a bathroom in the English countryside. History does not happen in a vacuum. The present is nothing without the past.

Someone waved a scarf in front of the overhead light to simulate a strobe light effect. We used the baby changing station as a card table, but we had no cards. So someone tore up scraps of paper – fliers and pamphlets they found lying around. 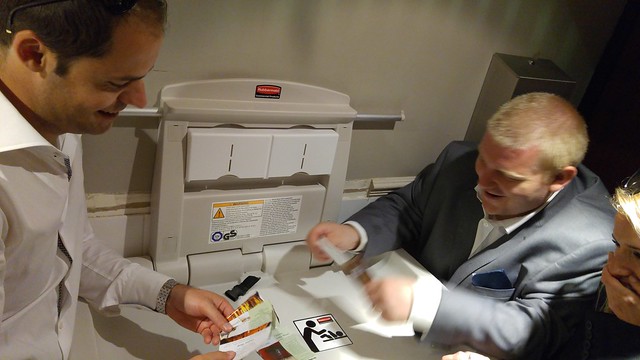 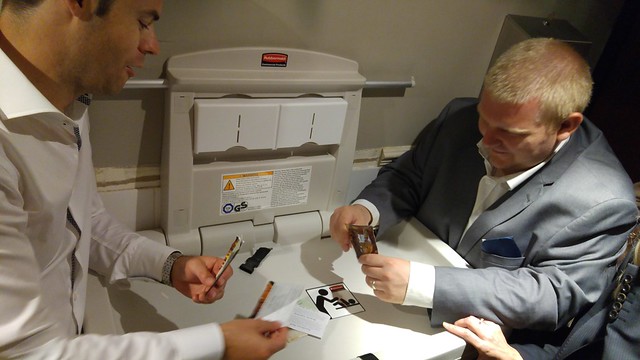 I feel it pertinent to note that scraps of paper are not a suitable substitute for a deck of cards, unless everyone is very willing to suspend their disbelief. Fortunately, when you are having a party in a bathroom, that is precisely what you are willing to do.

“I see you’ve played your Lexus advert. But I’ve got … HALF A PICTURE OF A RENTAL COTTAGE.” 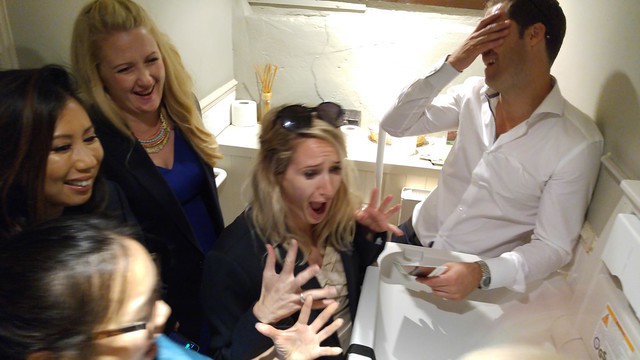 The “OH MY GOD, We’ve WON! Or lost! I HAVE NO IDEA WHAT THE RULES ARE” moment.

Our time in the bathroom can best be summed up by which of the following sentences:

A.) It bore a surprising similarity to some of the lesser known works of Austen.

C.) It had a shockingly negative impact on the value of the Euro.

D.) It was the most fun anyone has ever had in a bathroom, and yes, I do realize that lots of sex and drugs happen in bathrooms. 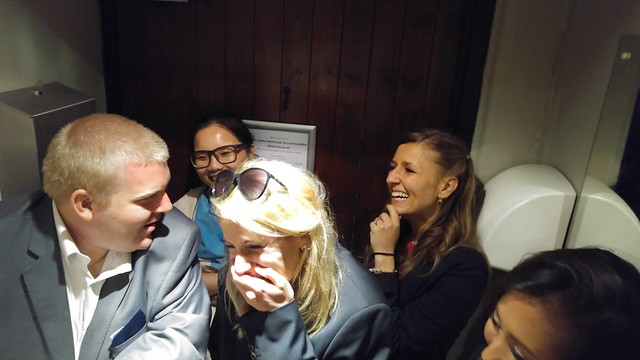 The cabs would eventually arrive, one by one. We were the last to go – two hours after the wedding had officially ended. Our cabbie took the country roads with the subtlety of a race car driver with something to prove. We were so relieved that he’d arrived at all, that we said nothing.

And that was it. The story of Jane and Stephen’s wedding. There were no reporters, not a single news crew covering the event. The next day, there was no mention of it in the papers.

But do not tell me that those small moments did not carry weight. That we are not worthy of the front page. That we have not changed the world and lead in the polls and been spotted jaunting around with a newly-single Ben Affleck.