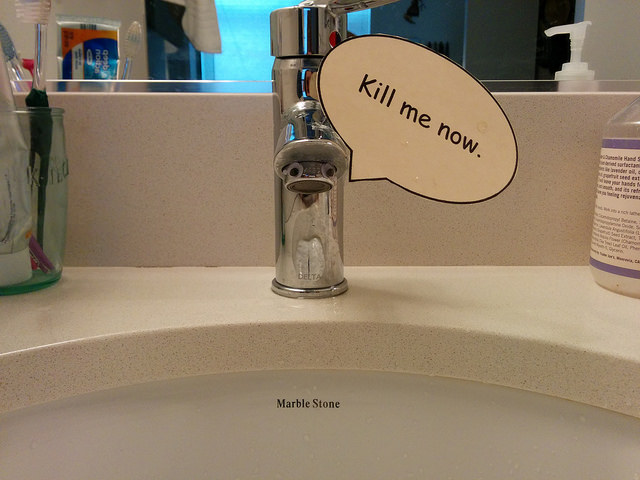 Posted in: Life at Home, Loving the Entrepreneur, Nothing to Do With Travel 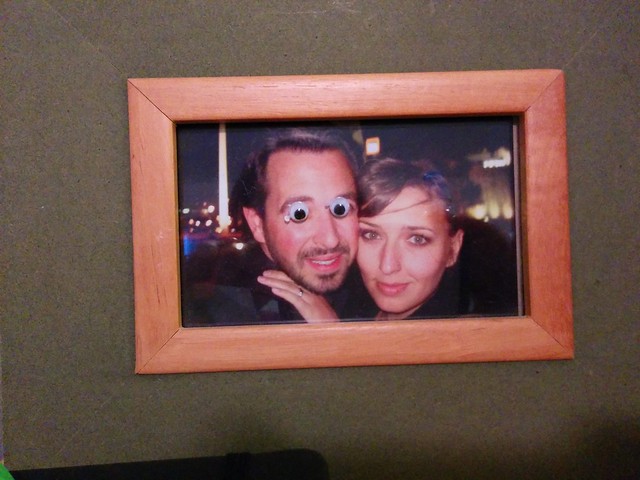 Someone once told me that the key to any lasting marriage is honesty, which is maybe true for, like, the Pilgrims, or any other archaic religious group that doesn’t believe in the real secret to marriage: passive aggressiveness. Also spite. Having a shared interest or hobby helps, too. But seriously, that last thing is impossible to find (I, for one, have met precious few date-able men who want to sit around eating cake, dishing about how the instructor in barre class used to be a dancer (but now is just bitter), and pausing Jeff Goldblum movies at opportune moments where his abs are in full view. That’s not to say that men like that don’t exist. Just that if they do, they probably don’t want to have sex with women).

Besides, passive aggressiveness (or PA, as those of us in the Pilgrim-free Happy Marriage Club like to call it) and spite work just fine. Dear Abby won’t tell you this, because as long as you have problems, she’ll continue to have a job. Not me, though. I can be totally honest with you because I’m unemployed.

Before I begin telling you of how my own PA awesomeness saved my marriage (Yet again, I whisper into the night), I am compelled to describe our home to you as it is pertinent to the story.

Rand and I live in a 3-level townhouse that is a prerequisite for nearly every childless 30-something entrepreneur in Seattle. The kitchen and living room are on the first floor, our bedroom and Rand’s home office are on the second floor, and my office is in a lofted area at the top (which is convenient, because it means Rand doesn’t have to listen to me yelling at YouTube commenters). There are bathrooms on the first and second levels, and you can rest assured that whatever you are looking for is not on the same floor that you’re on. Especially if it’s your cell phone. And it’s ringing.

This sort of layout is great if you don’t have a very big lot of land to begin with, and also if you plan on hating all future residents of the unit.

Several times over the last week or so, my beloved has walked into the living room and said, “Damn it, I really wish we had tissues down here.”

Now, keep in mind, there is a bathroom on that first floor with rolls and rolls of toilet paper in it, but apparently my husband is the Queen of England, and using t.p. to blow your nose is an activity worthy of serfs.

His comments led me to conclude that we were out of tissues altogether. That was until I checked the bathroom closet in Rand’s office. I found boxes and boxes of them, as though I’d been stockpiling tissues in anticipation of harsh rationing during some inevitable future Kleenex War. There were just sitting there. IN HIS OFFICE.

I grabbed one of the many tissue boxes in the cabinet, intending to bring it downstairs. But I just couldn’t bring myself to do it, because if I did, how on earth would Rand know how upset I was? I can’t just tell him how I feel. This isn’t France. 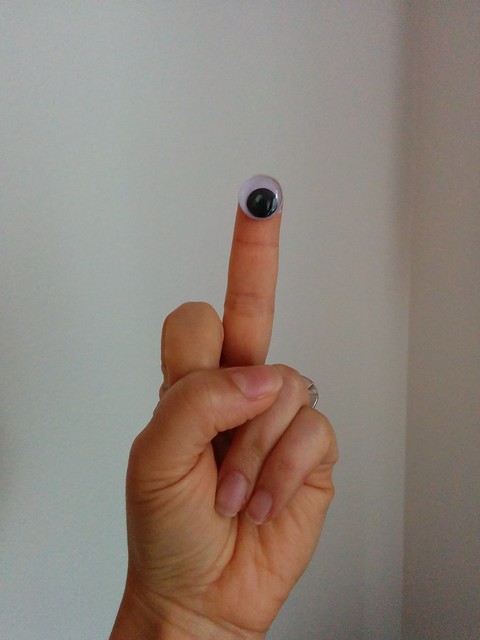 So instead, I spent an inordinate amount of time looking for my bag of stick-on googly eyes (they were in a drawer, along with my checkbook and a pair of blue latex gloves. I think I was trying to put the magic back into paying my taxes) and proceeded to affix them to the tissue box. This is a practice known as eyebombing, and it is a wonderful use of one’s time. 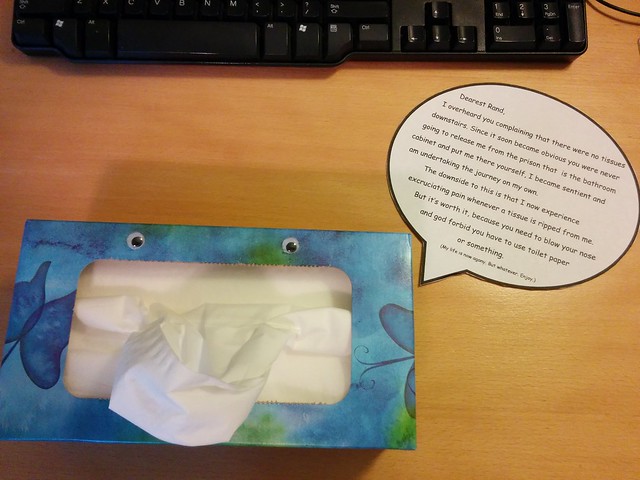 The tissue box was glorious. But it wasn’t enough. So I gave it a speech bubble: 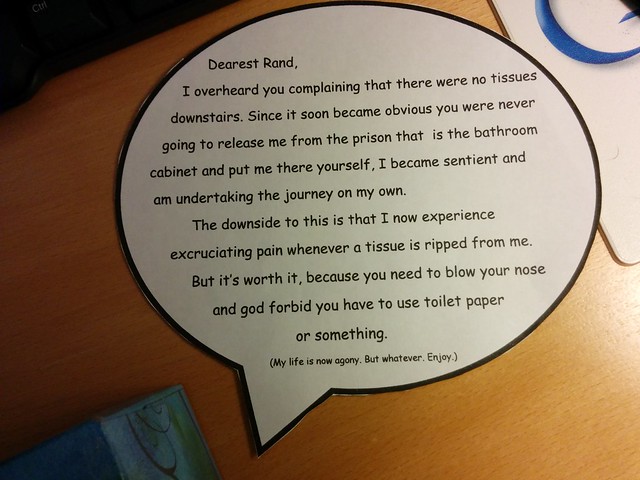 After that, it seemed only right to add googly eyes to all of his stuff. And more speech bubbles.

For some reason, I decided that everything in our home was a rational being, living a life of constant agony. Sort of like the record player in the Flintstones.

Do you remember how the record would scratch and his beak would get ruined and they’d THROW HIM OUT?

Consequently, they were spouting some really dark, Nihilistic type stuff.

I used the Comic Sans font on all the speech bubbles because Rand hates Comic Sans. And because Nihilism is funnier in Comic Sans.

This was the first little guy Rand found. He was also my favorite. Because when you see him you wonder why he’s so down. 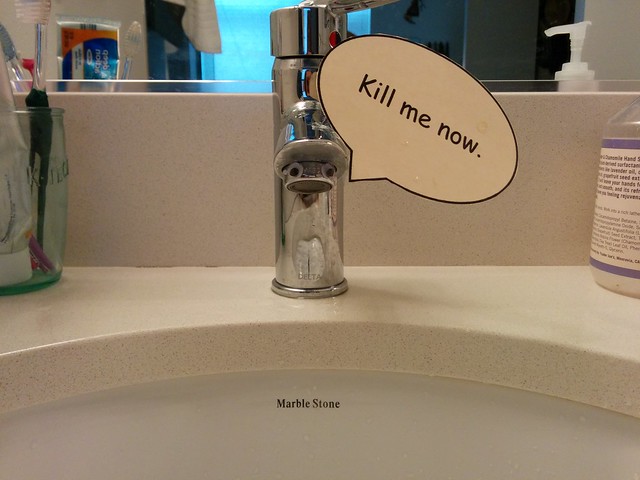 And then it hits you. 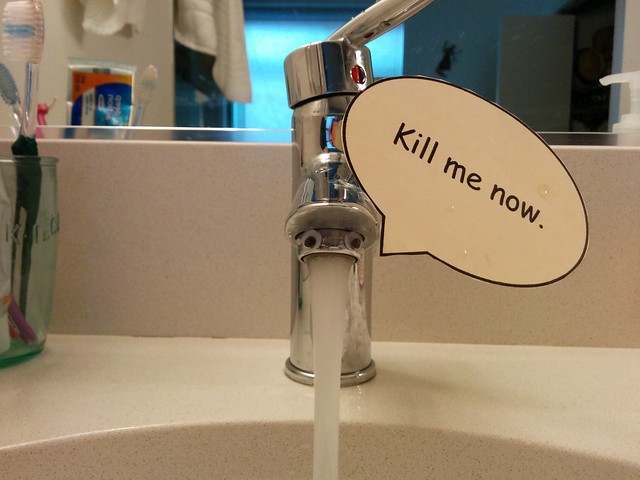 (I know, I know. The entire state of California is made up of charcoal briquettes right now, and here I am wasting water. But I left it on for a second and also, quiet, you.)

Rand was somewhat alarmed by this.

I didn’t answer. I just started laughing maniacally. Surprisingly, my cackling like a Bond villain did nothing to do calm him down.

Fortunately, he found the tissue box not long after.

And then he found the rest. 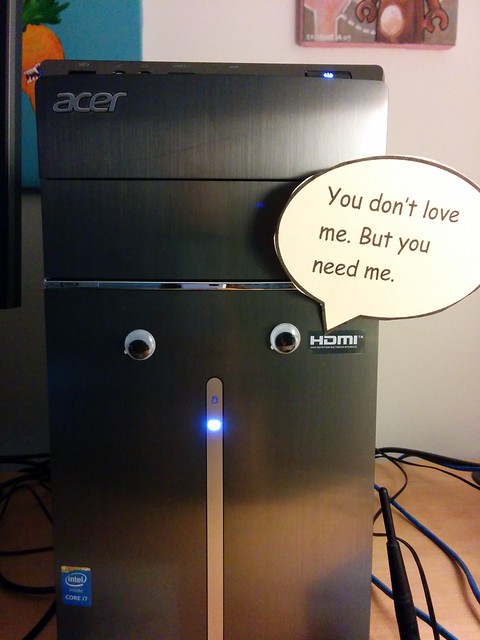 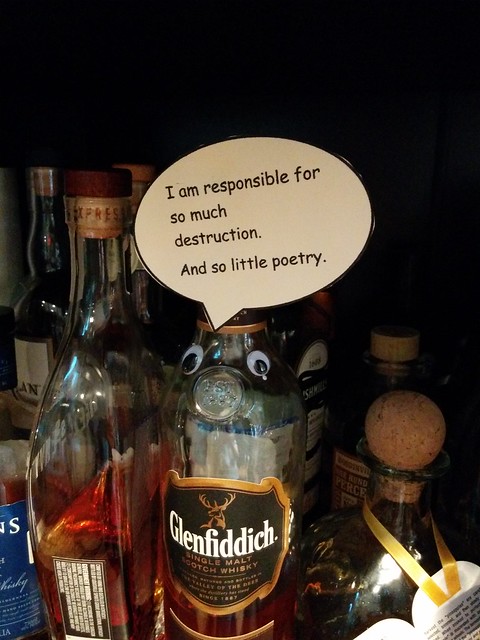 I’m pretty sure I’m part of the reason why my husband drinks so much fancy scotch.

He didn’t really get why so many of our household appliances were sad. 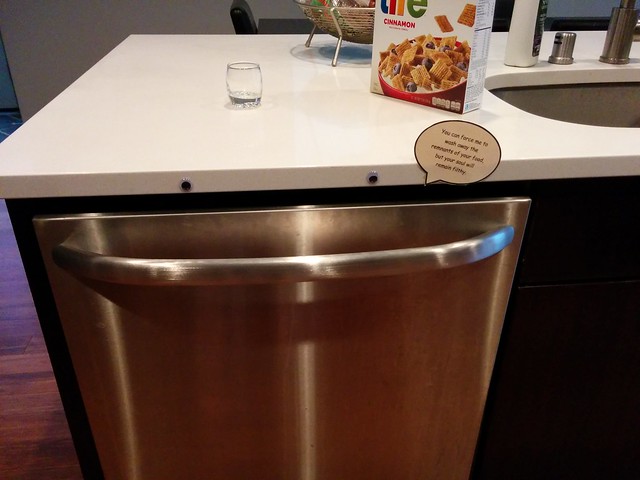 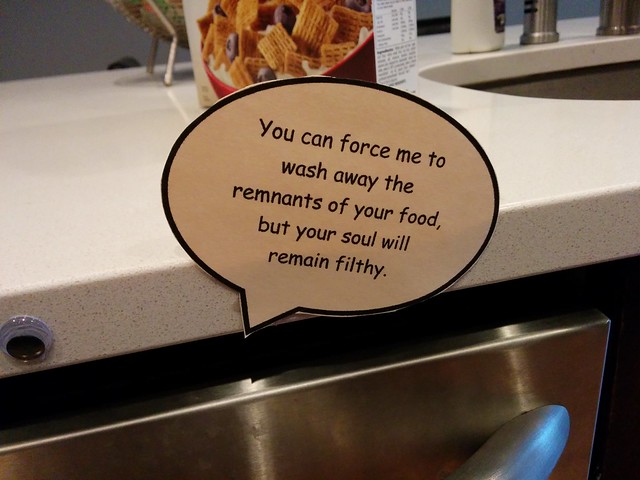 “Why would the dishwasher say that?” 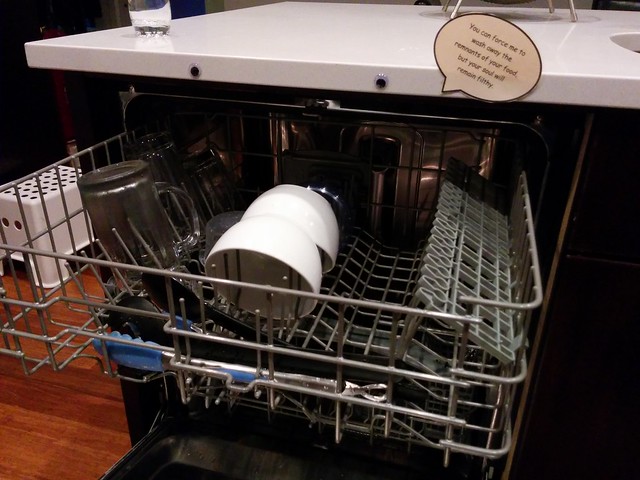 It was almost better when it was open.

I thought the freezer was really cute. It kind of looked like a duck. For reasons still unclear to me, I decided to give him debilitating self-loathing. 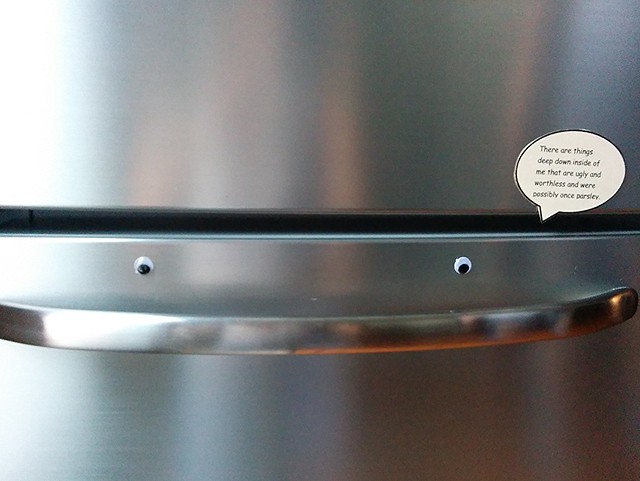 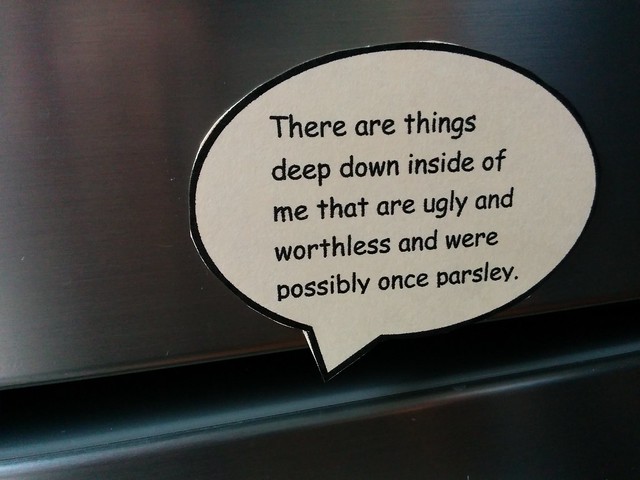 “Um, baby, this looks like it took a long time.” 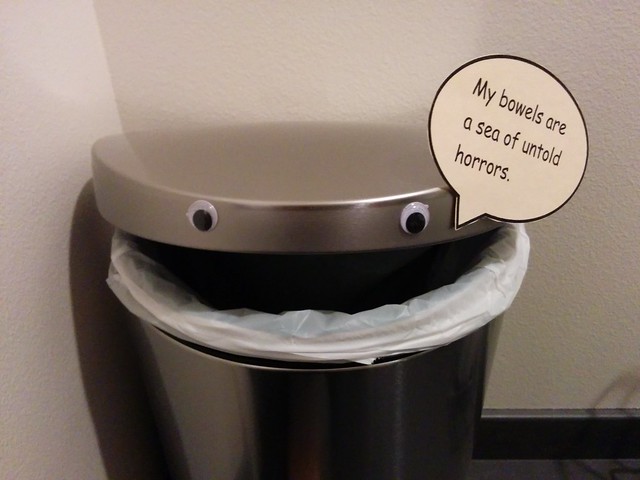 Later that night, as I was climbing into bed, he came in from his office and gave me a hug.

“Thank you, baby, for all the things you do for us,” he said.

“Of course. Like today, you put eyeballs on things.”

I must have been awesome in a past life, you guys, because I sure as hell don’t deserve this one. 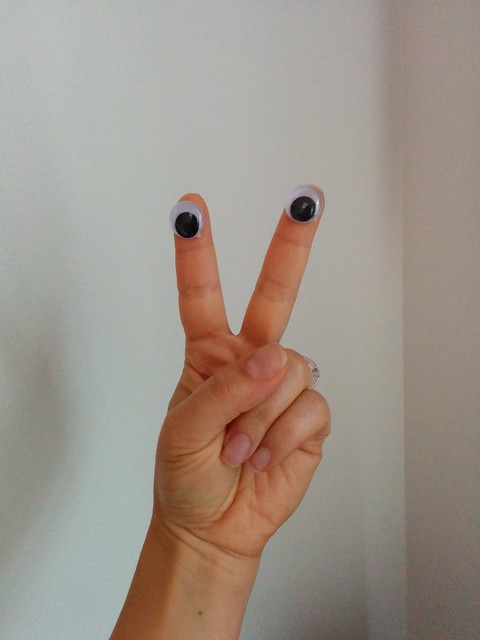 Update 1: It’s now the next day, and Rand has yet to move the tissue box downstairs.

Update 2: I had him read a draft of this post (in my office) and while he was doing so he said, “I wish there were tissues up here.” I am married to a monster.

Update 3: Rand hasn’t found all of the eyebombs yet. We’ve dismantled all of the ones he has discovered and I’m wearing the speech bubbles and placing eyeballs all over the house. Sometimes randomly. 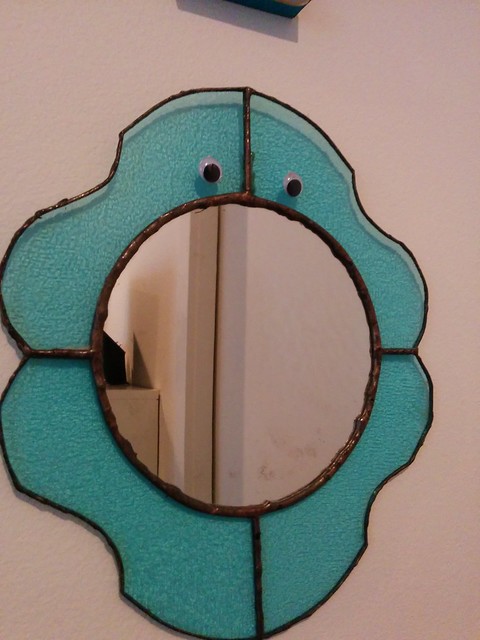 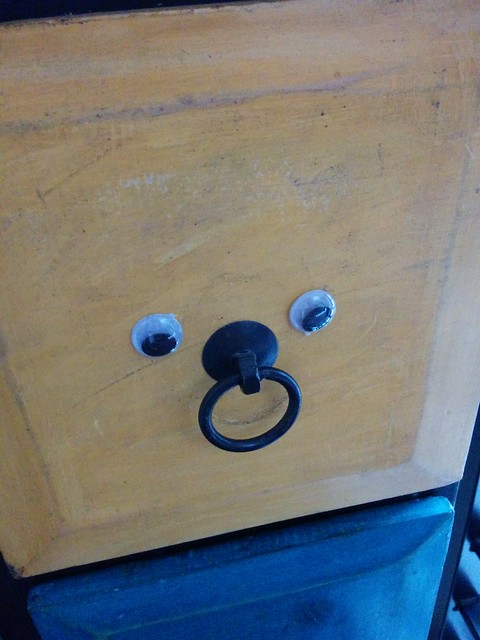 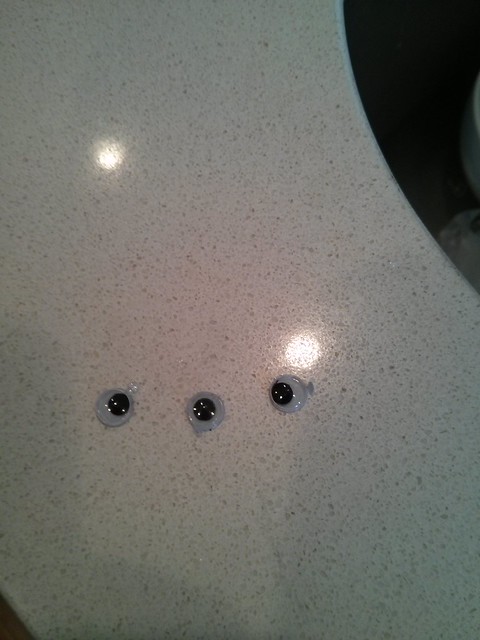 I should probably go work out or something.