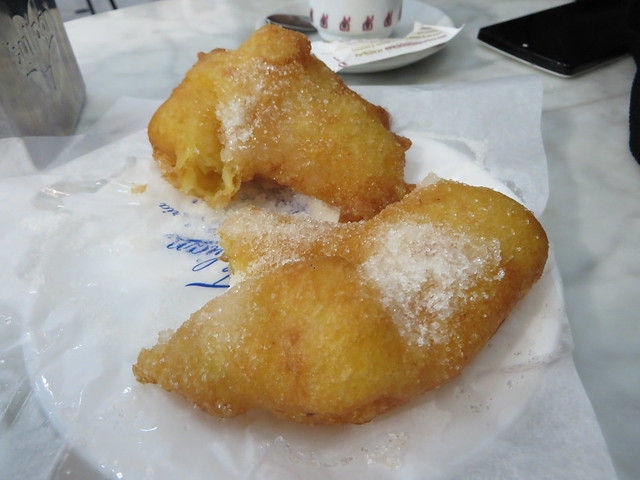 I’ve never been one to have much restraint when it comes to sweets, especially when I can eat them in the name of “research.”

“It burns more calories this way,” I will say to Rand, my mouth full of fried dough. He has learned, over the years, not to challenge this assertion.

The Spanish, to our delight, did not dance around the issue of the dessert. On nearly every street corner in Valencia we found bakeries, churro cafes, and little stands selling warm buñuelos by the bagful.

We ate in the rain, we burned our fingers, we failed to notice – for hours! – the streak of sugar on our cheeks. Overindulgence happened regularly. All in the name of research. I am nothing if not a scholar.

Here is a guide to what we ate, and where.

(Warning: if you are anything like me, this post will make you drool awkwardly onto your keyboard – more so than usual.)

I’ve had churros before, but in the U.S., they are a different animal. Long and ridged, most often sprinkled with sugar and cinnamon. We did find something like this in Valencia – minus the cinnamon – from a street vendor. The churros were shaped into little loops, the grease quickly soaking through the bag in which they were handed to us.

Rand, ever the churro aficionado, would later say that the ones he bought from the street vendor were his favorite of the trip. (So keep in mind that you don’t need to pay a lot to get a great one – just look out for a place that is frying them, fresh.)

But the variant that we most often saw in Valencia was more tender, less crunchy at the edges, and absent of sugar (I have since learned that this is the Andalusian style of the dessert – often called a calientes or tejeringos). The flavor, on its own, wasn’t sweet at all, and was faintly salty (imagine a plain pizza crust) but it was served alongside a thick cup of chocolate in which the churro is dipped. 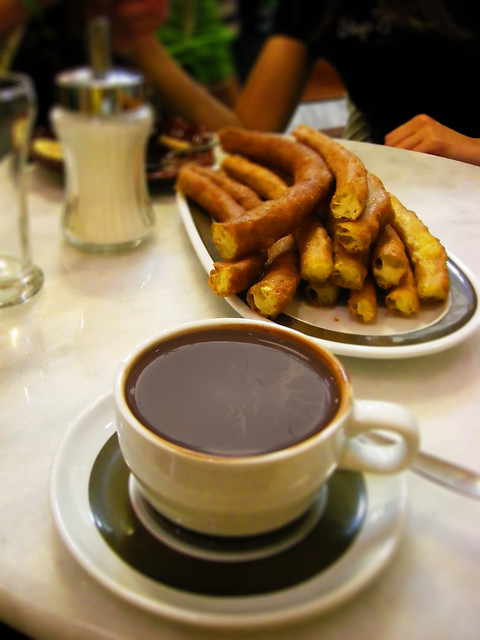 Note: I have never, not once, seen anyone try to actually drink this chocolate, although it is served in a mug with a handle. I think doing so wouldn’t just be a faux pas, but would be on par with trying to guzzle down a glass of maple syrup.

Not that that’s a bad idea or anything.

These were, if I am to be honest, quite possibly the best thing that I ate in Spain. Ostensibly just a doughnut (but what does that even mean? Jeff Goldblum is just a man, and yet so much more), pureed squash or pumpkin is often added to the batter, resulting in a richer, gooier dough. Buñuelos tend to be either round or hoop shaped, and we encountered both kinds on our trip. 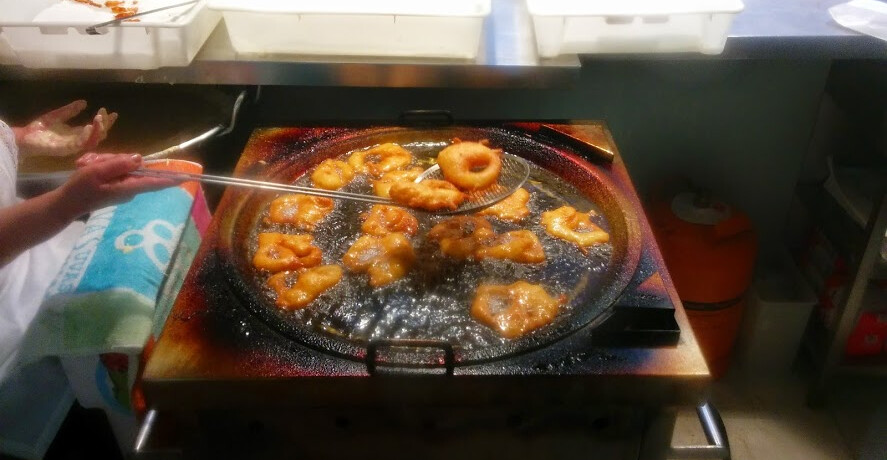 Finding good buñuelos turned out to be an odyssey. Both of the cafes we wanted to try were closed the first few times we went. When we finally passed Horchateria El Collado during open hours, and saw the line of people waiting for buñuelos was mercifully short, we were so excited that I ordered a dozen without really thinking about it. A dozen. Between just the two of us. The woman taking them from the fryer asked if we wanted them with a side of dipping chocolate (like the churros), but I opted for sugar, which she generously tossed in the bag. 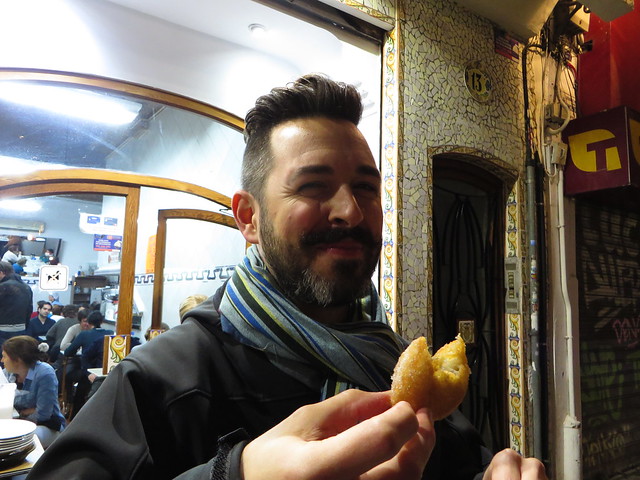 The filling was soft and doughy, the sugar coating on the crisp outside dissolving in the heat and oil. Rand and I finished two a piece before realizing our hearts were going to explode. The we each had one more. 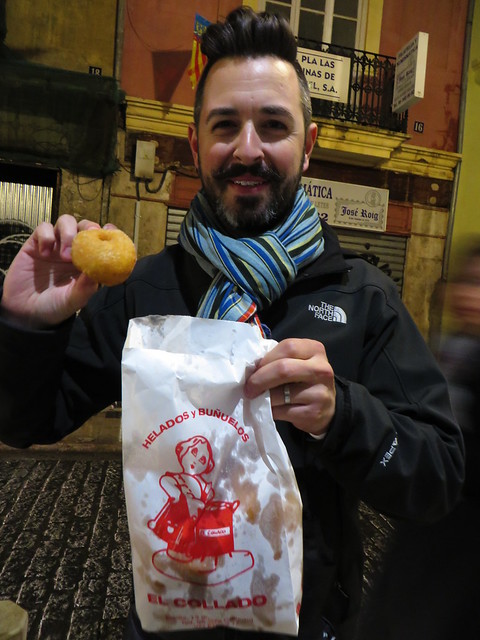 Miraculously, they were not my favorite of the trip. The buñuelos we had at Horchateria Fabian were, in my opinion, far superior. They were hoops (and looked not unlike giant onion rings), and as we had at El Collado, we saw them come directly out of the fryer, served to us piping hot and doused in sugar. We opted to get only three total, which I regretted. 12, honestly, would have been more fitting.

The ring-like shape created crisper edges, and the inside wasn’t quite as doughy (which was actually preferable. Trust me: you only think you want to eat undercooked doughnuts). 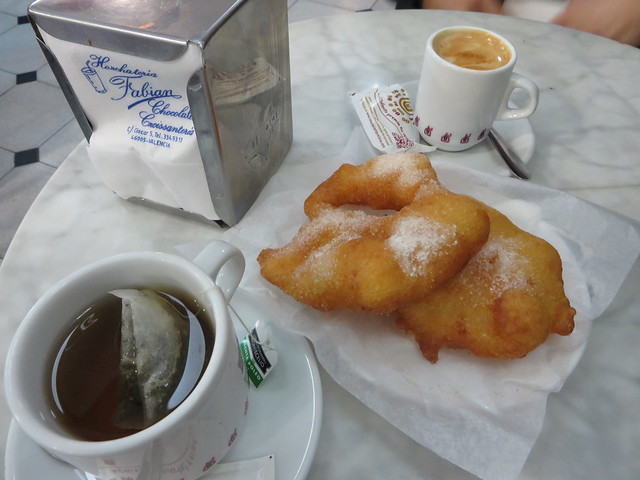 When we were in Lima, years ago, I remember trying picarones – the Peruvian version of buñuelos. The pumpkin flavor was much richer than what we encountered in Spain, and they were served in a cinnamon-infused, carmelly syrup. Again, I feel it pertinent to note that tilting the plate and drizzling the syrup directly into your mouth is considered bad manners.

Again, not that that’s a bad idea or anything.

The name of these alone kills me. The pronunciation is a little bit different that how you’d imagine (fahr-tohn), but the jokes are plentiful. To wit. 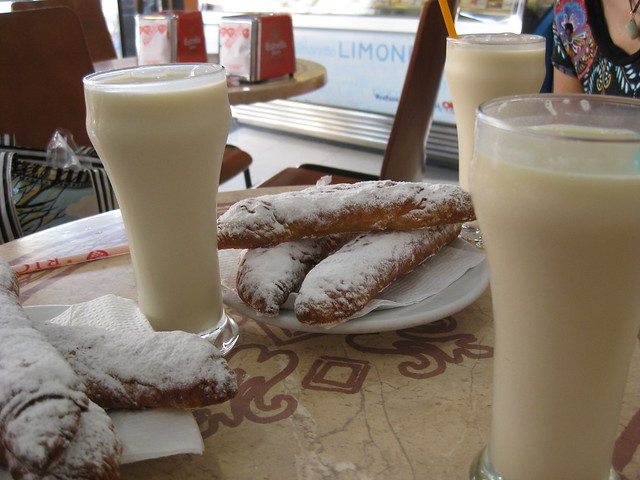 Unlike churros or buñuelos, fartons are baked, and not fried. They’re lighter and spongier, and far, far easier to inhale because they often are not served warm. They are traditionally served with horchata, which inspired their long, thin design (so that you can dip them into a glass of the stuff). We got ours at the Horchateria de Santa Catalina.

If you are a first-timer to Spain, I do recommend ordering a horchata as well. I didn’t bother getting one, because it was so cold out that I wasn’t really tempted by it.

Not like I was the farton, which I inhaled.  I literally finished mine in the time that it took Rand to get this photo of the cafe facade: 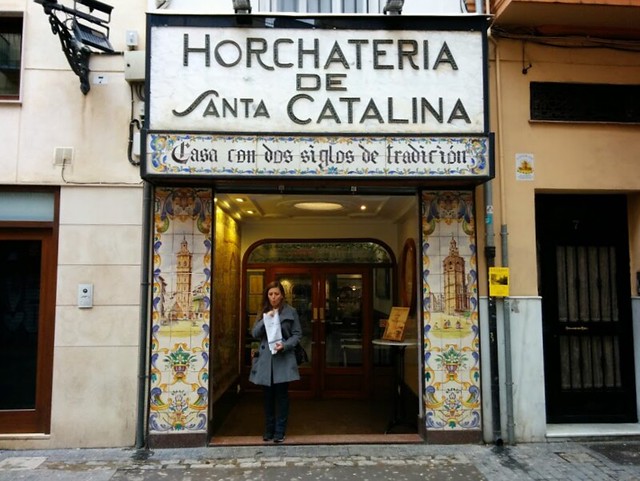 They’re sort of like a long, soft ladyfinger cookie (and yes, they look a wee bit phallic). Occasionally, they come covered with a thin, sweet glaze, but ours were filled with cream (I opted for vanilla; Rand got chocolate) and a dusting of powdered sugar on top. After days of fried sweets, they practically felt like a health food.

So that’s it! Our adventures in eating Spanish pastries. Educational. Endlessly caloric. And surprising: I thought churros were going to be my sole dessert pursuit in Spain, but it turned out that I enjoyed buñuelos more. The only way I learned that, though, was by trying everything.