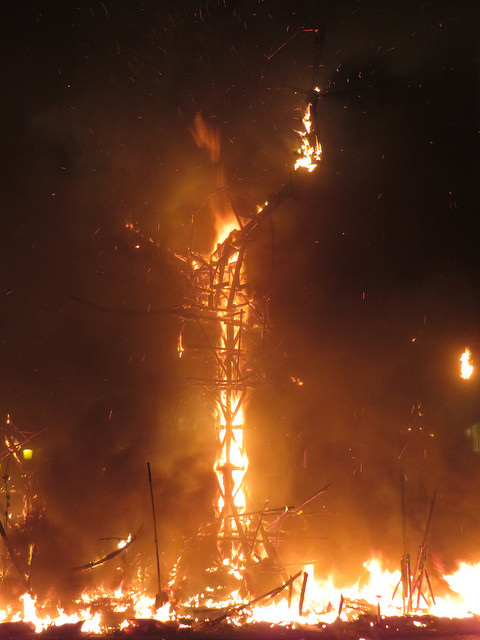 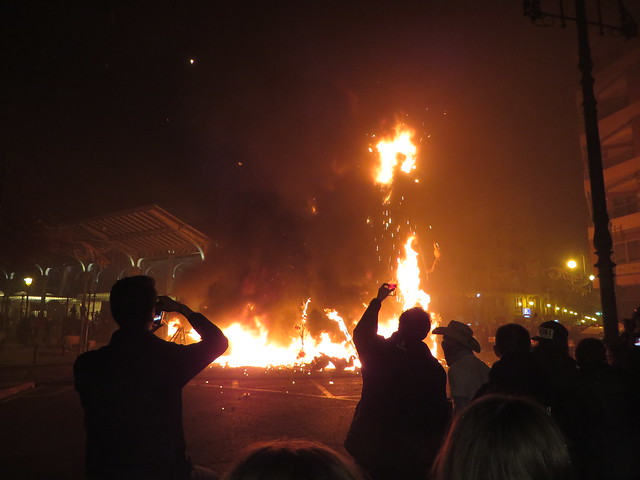 Seattlites celebrate the arrival of spring by having picnics. Valencians do it by setting shit on fire.

Last week, I went for a run to the park near our home.

And by “jog” I mean walking in sort of bouncy way that, if viewed at a much higher speed, would suggest the act of physical exercise.

Anyway, as I was “running”, I noticed how warm it was. The air smelled of magnolia flowers, and my neighborhood was overrun by even more hippies than usual. Even the goth kids were lying out in the sun, rolling up dark pantlegs and sleeves to reveal translucent white skin.

I then ran through a cloud of gnats and promptly swallowed two. As I endeavored to cough them up onto the pavement, there was no doubt in my mind: spring had finally arrived in Seattle.

I realized that in most parts of our hemisphere, spring arrived last month, but the Pacific Northwest is incredibly good at ignoring facts like that. When I first moved back here from Florida, the winter seemed eternal. I counted down the days until the equinox, and was near-despondent when I found that nothing had changed. The sky remained grey, the air damp and chilly.

I’d learn that this wasn’t always the case; the first day of spring in Washington can occasionally be delightful – sunny and bright and full of hope right up until it starts raining a few hours later because March has decided to be an asshole. I’ve dealt with it by obstinately wearing sundresses in 55 degree weather and flipping off the heavens.

I know that even this current spate of sunshine we’ve found ourselves in won’t last. I went outside without a coat today, and the forecast promises a high near 70 tomorrow, but I’m not so easily fooled. April is just March with better marketing.

Still, there is something inherently comforting about knowing that winter is, technically, over. That even though it isn’t exactly warm out, it’s not exactly freezing, either.

(Except for that one year when it snowed on, like, April 22. I went outside and screamed at the sky until Rand made me stop because he thought we’d get evicted.)

My point, if I ever manage to get to it, is that I understand that the winter can make even the most resolute souls a little Jack-Nicholson-from-The-Shining-ey. And that spring is a time to celebrate.

And maybe a time to set a whole bunch of things on fire? That’s what the Spanish do.

Granted, they also eat dinner at midnight and take a nap in the middle of the workday. Which might make them crazy. Or geniuses.

The epicenter of this Iberian pyromania can be found in the beach side town of Valencia. At least, I think it’s a beach side town. It’s hard for me to say, because March had decided to be its usual dickish self. It rained every single day we were there, save for that first night, which coincided with the last night of Las Fallas. 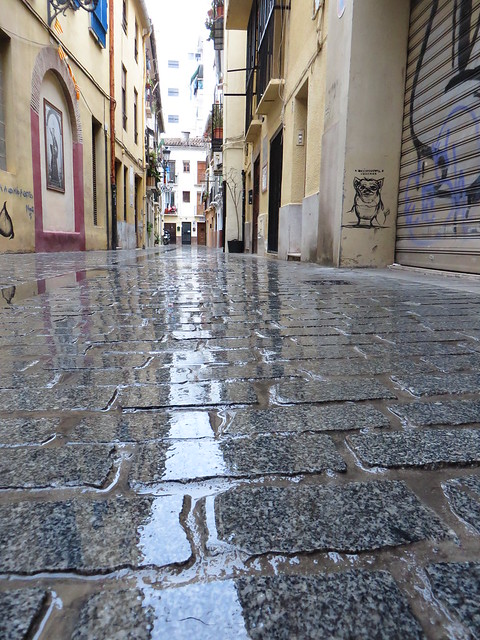 The streets of Valencia, doing an uncharacteristic and surprisingly accurate impression of a spring day in Seattle.

Las Fallas is the annual festival to celebrate the arrival of spring that requires (for reasons that are still sort of unclear to me) the creation and burning of beautiful paper and wood mannequins (called ninots). They are slightly larger than life. This figure was probably 8 feet tall or so. 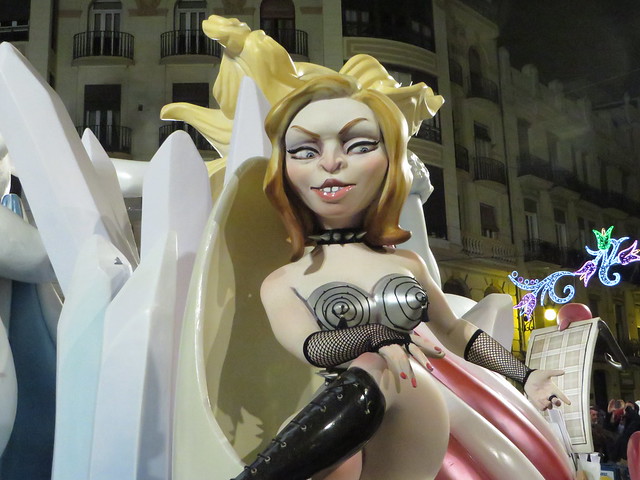 The ninots are often satirical depictions of celebrities or politicians. I think this is Angela Merkel.

They are often more than a little risque and nudity is plentiful.

This didn’t bother me at all. I’m a big girl. I’m comfortable with sex. I mean hell, we’re all grown-ups, right? 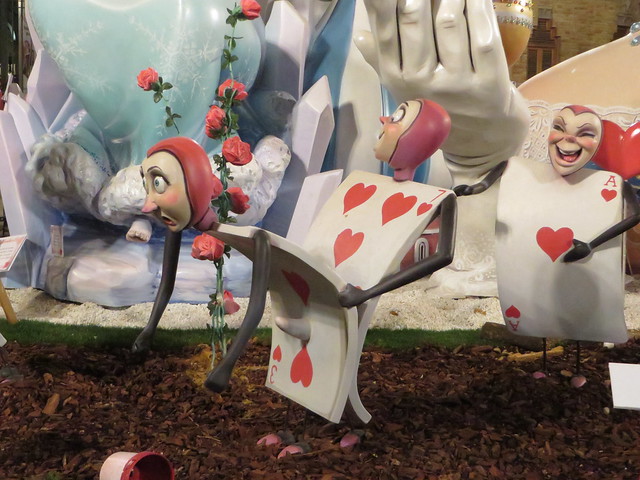 I really hope this is consensual, but I’m worried it’s not, and if it’s not, then it isn’t funny at all. And if it IS consensual, well … carry on.

Anyway, the ninots are assembled around some larger figures, and the entire tableau is called a falla (like the festival itself). They’re often two or three stories tall, and incredibly gorgeous (provided you don’t look too closely at what the ninots are doing). 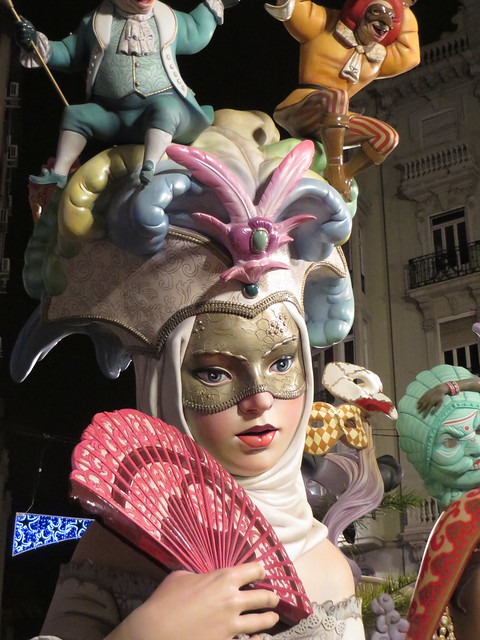 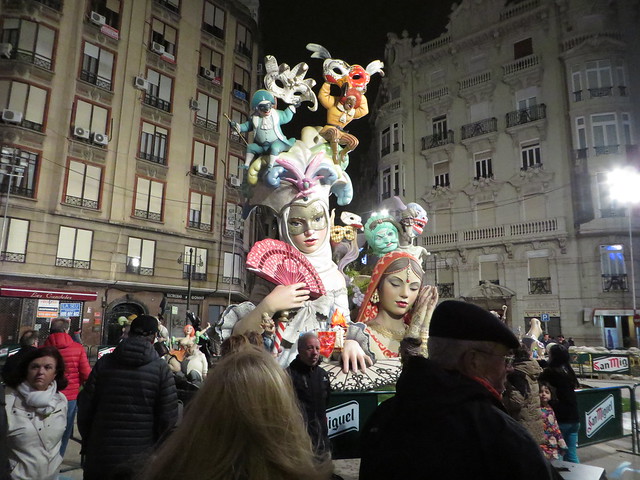 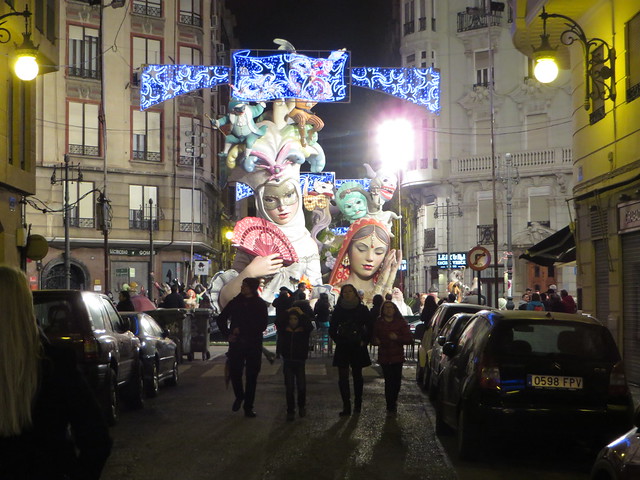 On the last night of Las Fallas, these gorgeous works are lit on fire and burned to the ground all over the city, to the delight of a cheering (and not entirely sober) crowd.

Ostensibly, this is because spring has arrived, and the bits of wood collected for heat and light during the winter months are no longer needed. But the bits of wood have evolved over the centuries to gigantic, colorful works of art which are then burned down in a grand display.

I’ve since concluded that Prometheus was a Spaniard.

I’ve already written extensively about Las Fallas – it is the subject of my essay, “Of Smoke and Churros”, which will be part of a travel anthology published by Ponies + Horses Books later this year (#shamelessplug #actualtitle). But pictures, I’ve heard, are worth more than the thousands upon thousands of words I’ve written about the subject, so I’m going to rely on them now.

The sun is coming through my office window. The air smells like all manner of green things, and I can hear the sounds of people – young and old – playing outside. That is how we celebrate spring here in the northwest.

Here is how they do it in Valencia: 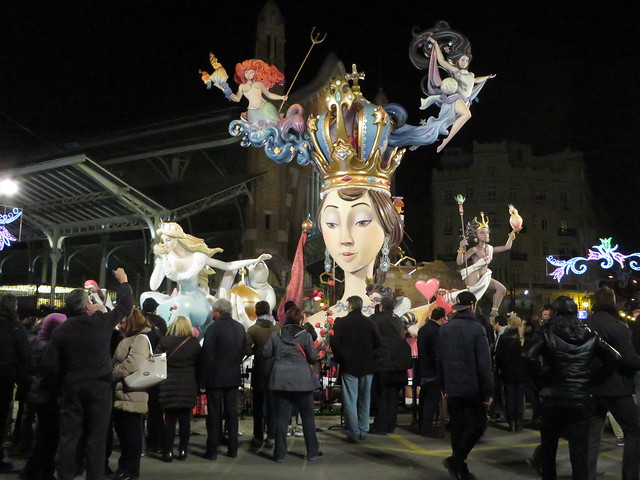 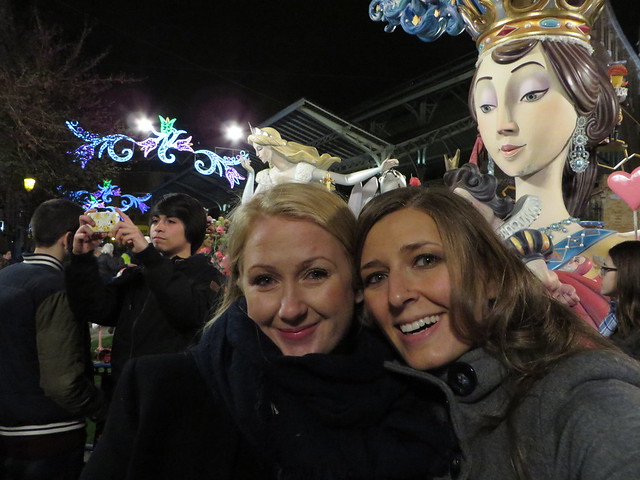 With my dear friend Lisa. 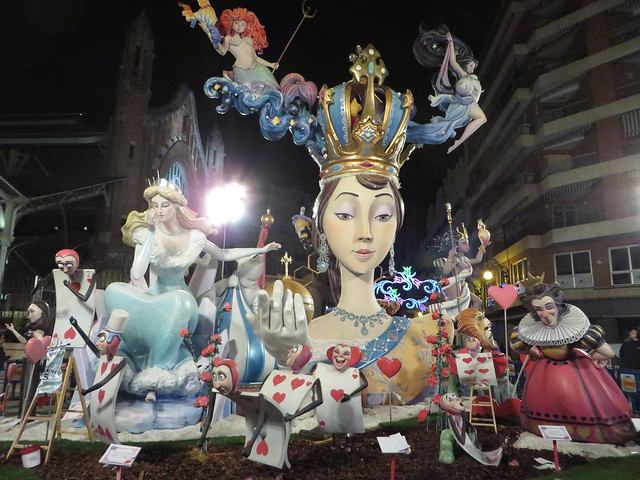 The entire falla, including the ninots. 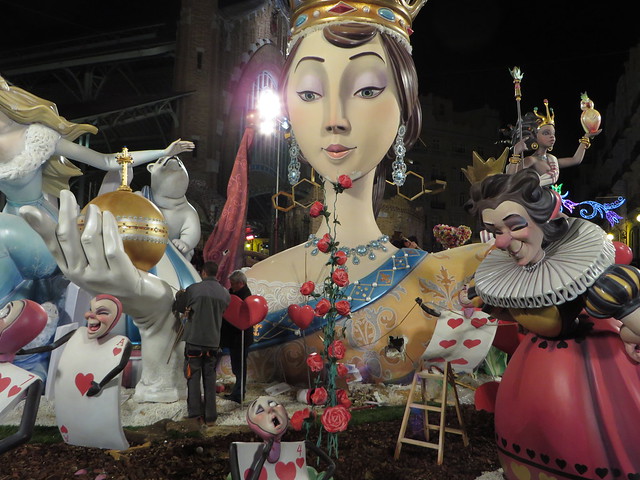 Threading a fuse around them. 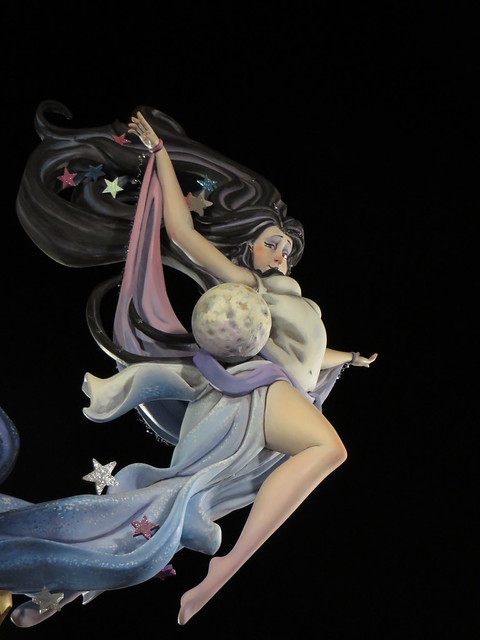 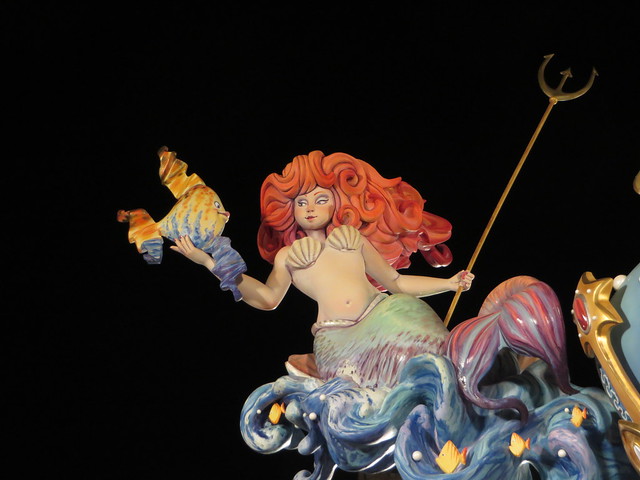 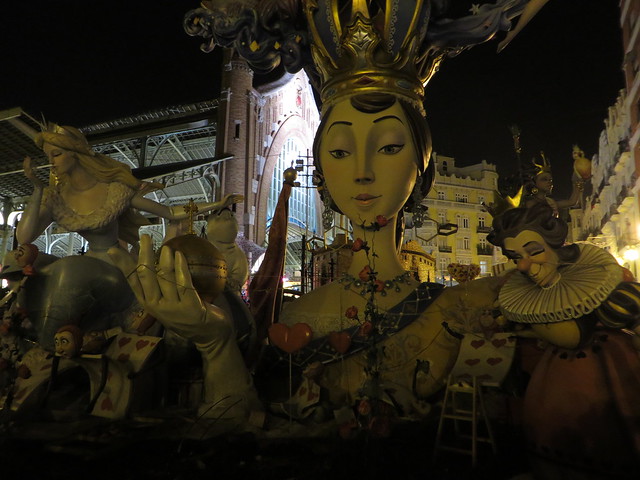 At some point, the lights were shut off … 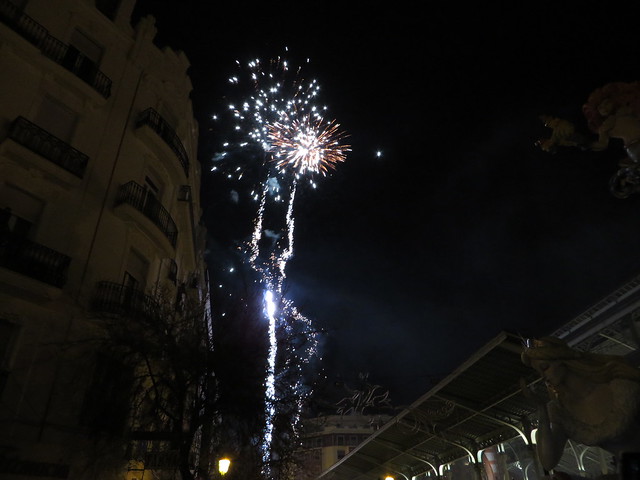 And the fireworks began. 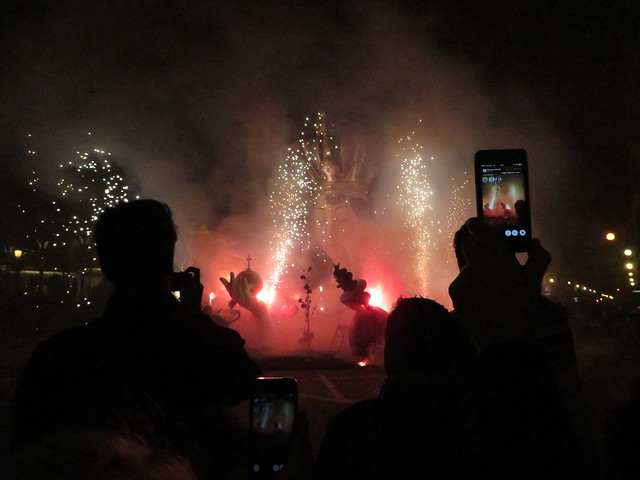 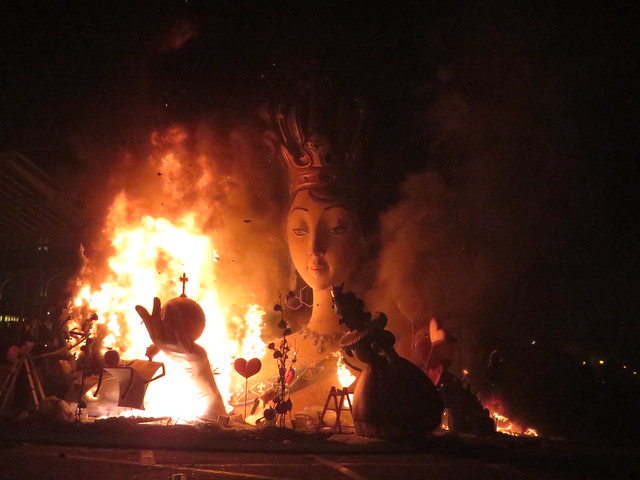 And for a little while, everything was beautiful and terrifying, all at once. 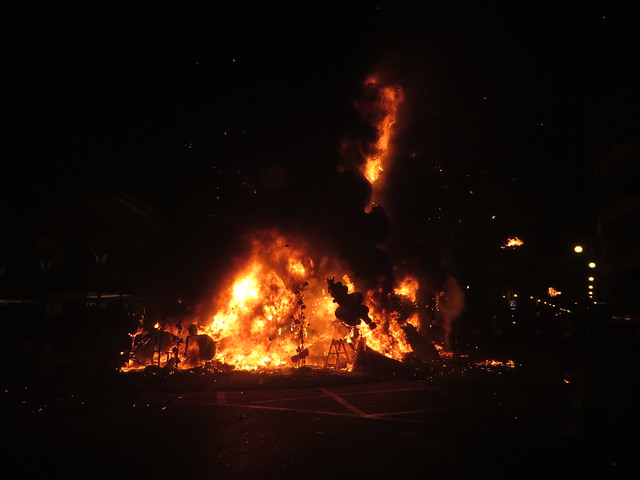 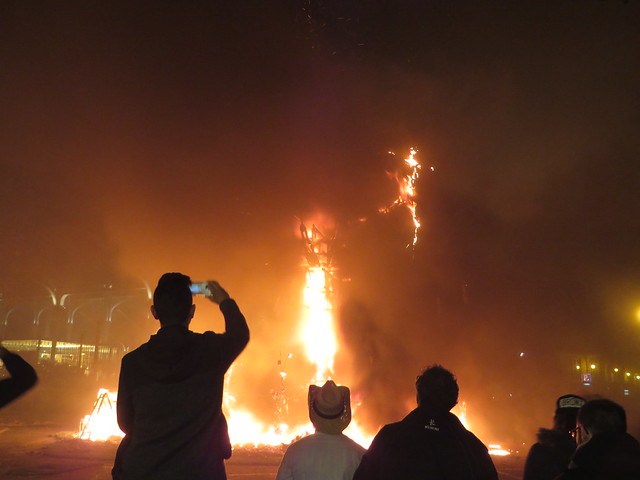 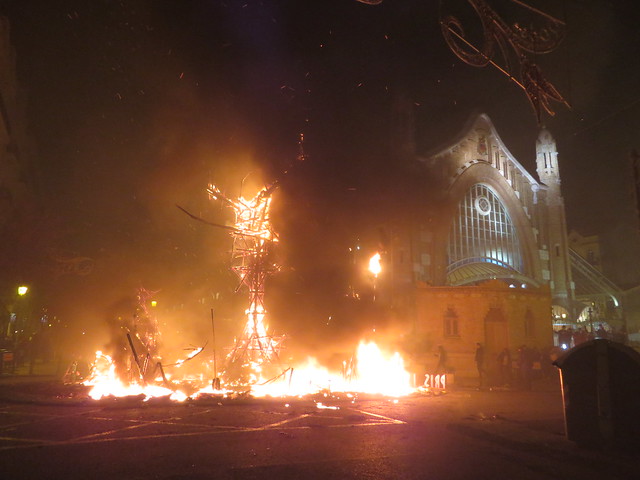