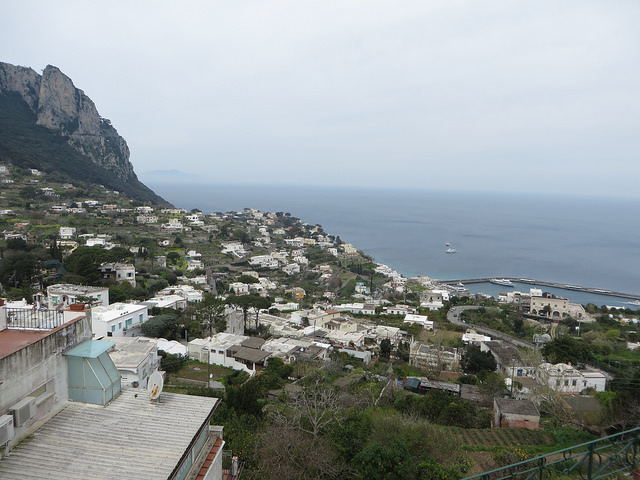 I know I was supposed to go Capri and love it. That just what people do – they paddle through the Blue Grotto and eat pizza at a cafe and fall in love with the place. But none of that happened during our visit. The grotto was closed on account of weather, and seemingly every cafe and restaurant we had looked up was either out of business or still shuttered for the season. 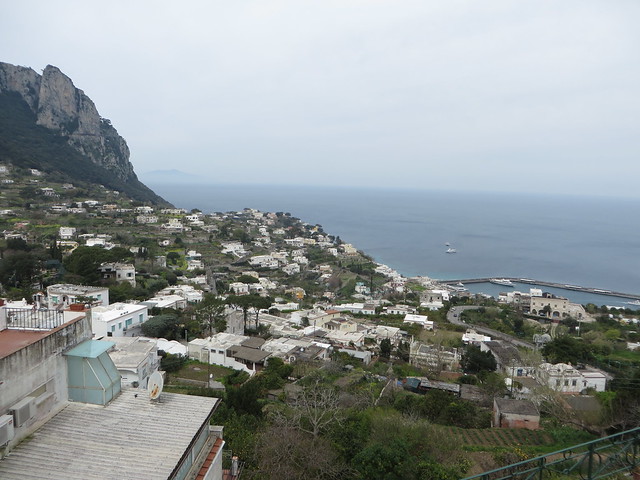 I suppose those factors (certainly the latter) contributed to my disdain of Capri. I don’t really know, and I won’t be visiting again any time soon to clarify the matter. I found the place overpriced and touristy. By the time we left, I was starving and annoyed and I vowed never to go back. 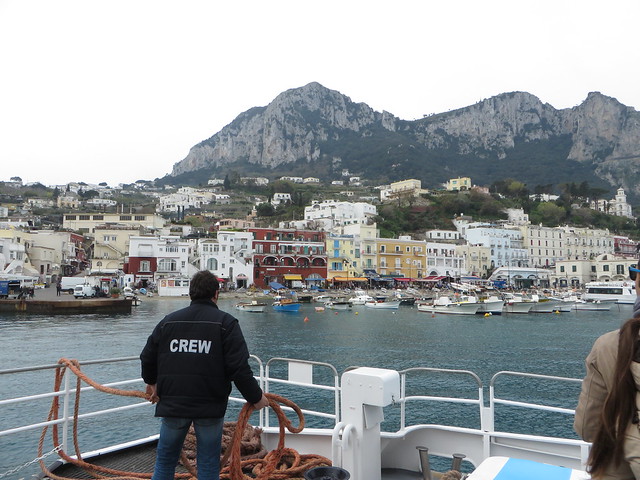 I know that I should give it another chance. Reserve judgement until I’ve seen what Capri has to offer. But that feels insincere, and besides, this is a story I want to tell. And now seems a particularly appropriate time to tell it. In the last few weeks, so many partially-forgotten tales have marched from the corners of my memory like the ghosts of injured soldiers – details amputated, names lost, timelines broken. Writing about them helps me make sense of it all. Unless I exorcise this misadventure, it will haunt me forever.

Our trip to Capri happened during that now infamous visit to Amalfi, so long ago that I’ve forgotten plenty of the nuances, though not all. The day started out overcast, the sky threatening rain as we waited to board our ferry – an ancient looking thing that  reeked of diesel fuel and old carpet. The tickets had been pricey – so much so that I checked our stubs twice to make sure we hadn’t been swindled. 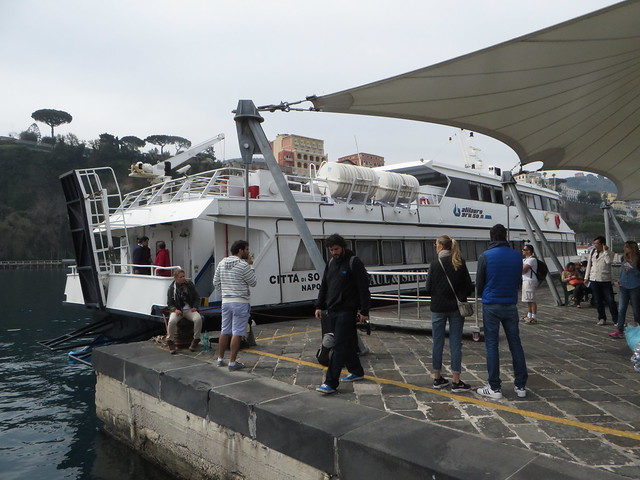 Even before we were on the boat a gentleman tried to pressure us into a tour. He pulled out a small badge featuring the coat of the arms of the area, and I almost laughed as he tried to pass it off as some sort of official document. He explained that for 20 Euros a person his organization would show us around the island. I politely declined.

I’m pretty sure his official badge was a keychain.

Later I would see his group shuffling around the island, everyone wearing headsets and looking rather miserable. I was confident we’d made the right choice in avoiding it, but it would be overshadowed by a larger error on our part: that we’d bothered to come to Capri at all.

We found that the Blue Grotto was closed because of the clouds (without sun, it’s simply a dark cave). I was disheartened by this – it had been one of the reasons I wanted to visit. Unsure of what else there was to do, we headed away from the water, up the hill to the main road and square. It was oppressively humid, and by the time we reached the top we were overheated and sweaty (later, two old women bundled up for winter stopped me to ask if I was cold. I explained that I wasn’t, but one of them touched my arm gently. They were worried I would freeze. That moment, brief and wonderful, is one of the only good things I remember about Capri). 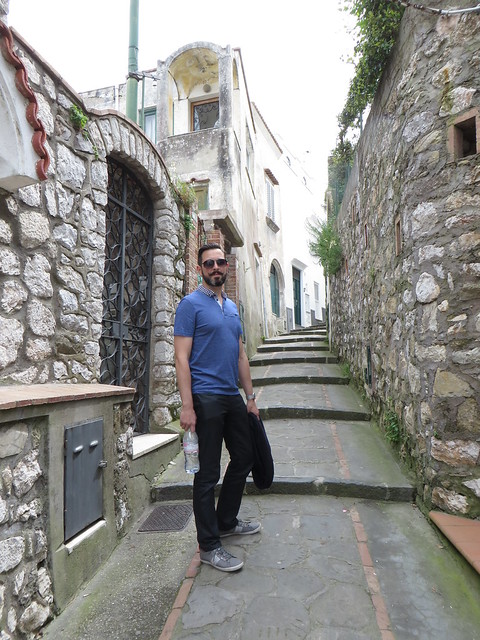 Rand, overcome with the magic of Capri.

In the city square, though uncomfortable and already sticky from the hike up, I insisted Rand take a photo with me: 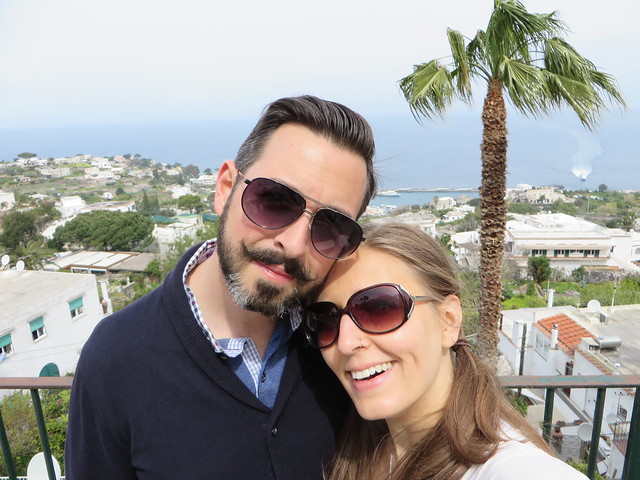 We wandered through a few absurdly expensive shops (I saw a small necklace with a 60 Euro pricetag. An identical one in Sorrento had been 10 Euros), and tried to find a spot for lunch. Rand had written up a list of restaurants, all dotted throughout the island, that were supposedly open that week. We walked from one to the other, crisscrossing Capri, and found that every one was still closed for the season. 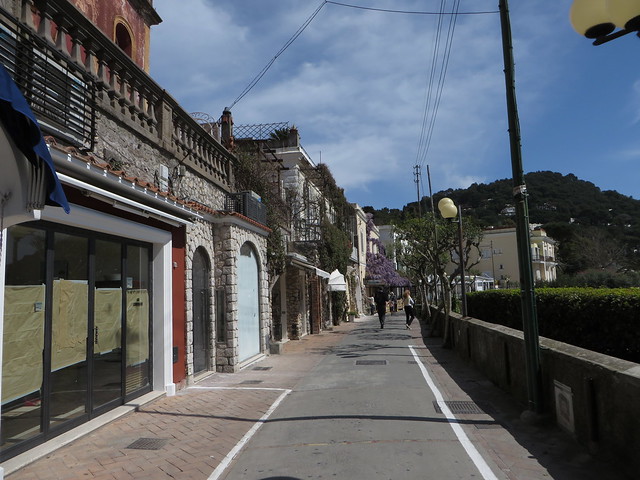 I think the restaurant at left, with the brown packing paper over the windows, was #2. 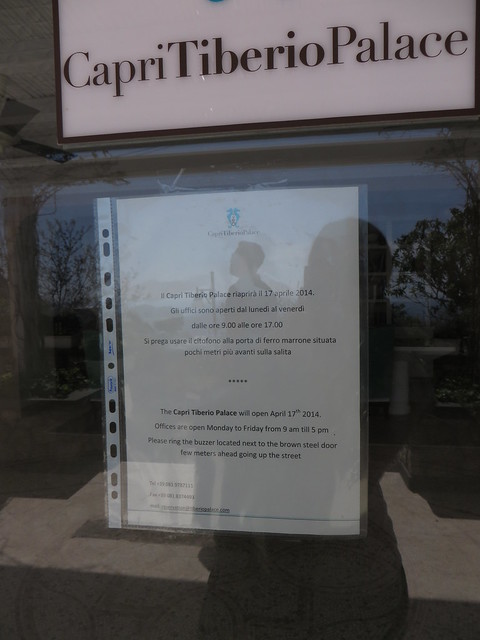 It was slated to open in two weeks. The internet had told us differently.

At the third shuttered door, we laughed. By the sixth, I was lightheaded with hunger and found myself uttering obscenities about our environs in two languages. 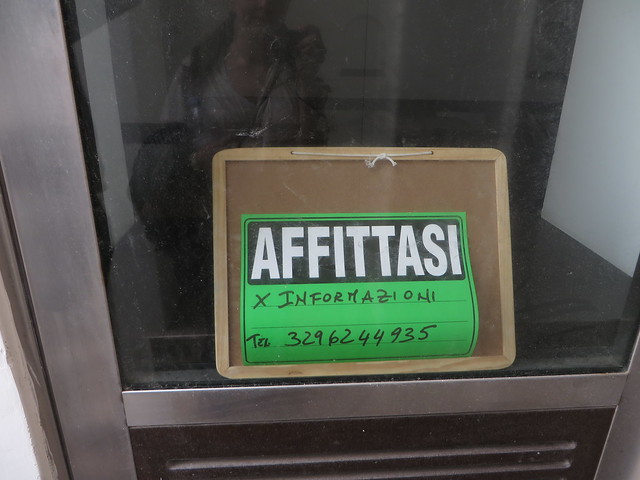 We did stumble upon this rather lovely arch in between our hunt for restaurants four (closed for the season) and five (seemingly abandoned, possibly overrun with squirrels). 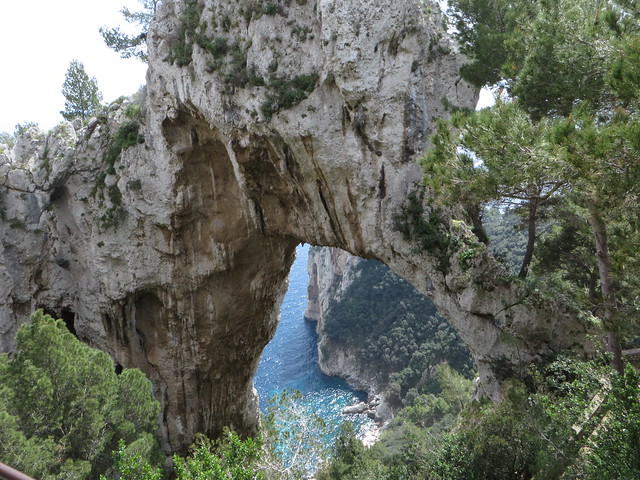 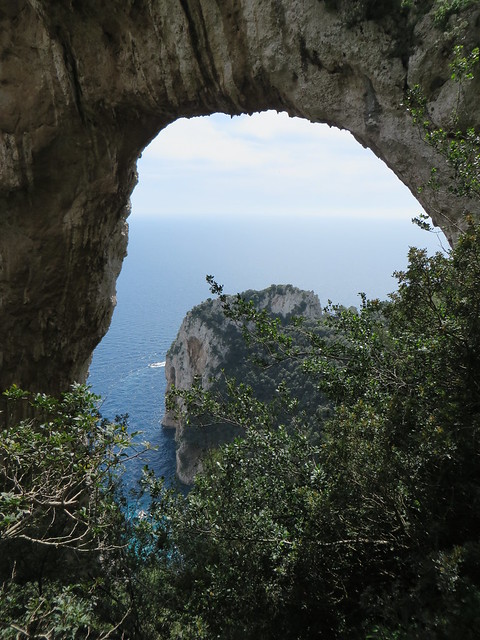 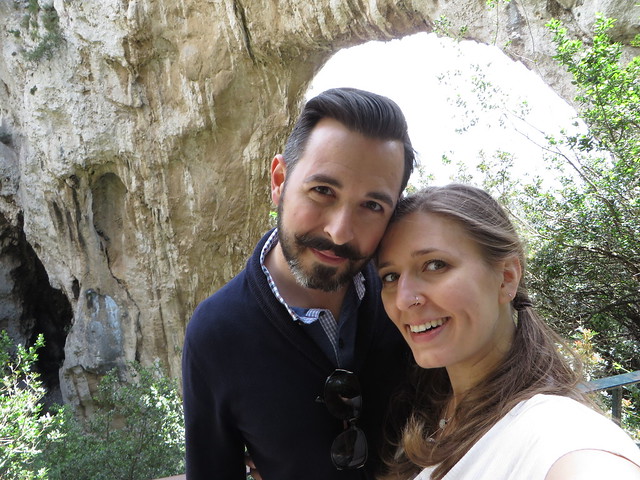 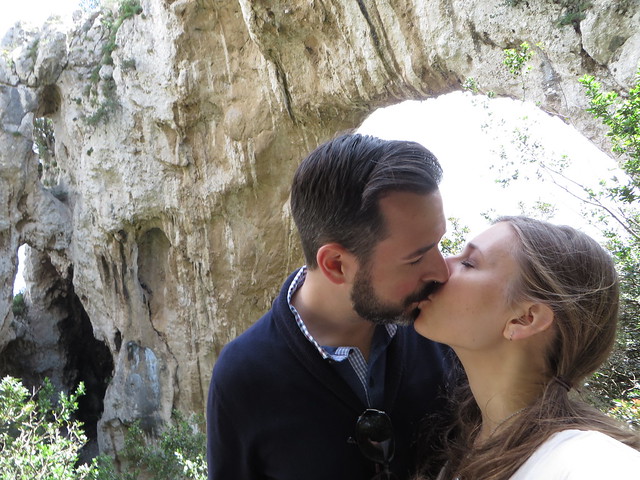 By the end of our visit, hunger pressed me to no longer be picky. I purchased a small calzone from a vendor, and found it inedible, even in my half-starved state. Rand and I took exactly one bite apiece before throwing it in the nearest trashcan. After three hours on the island, we had given up. 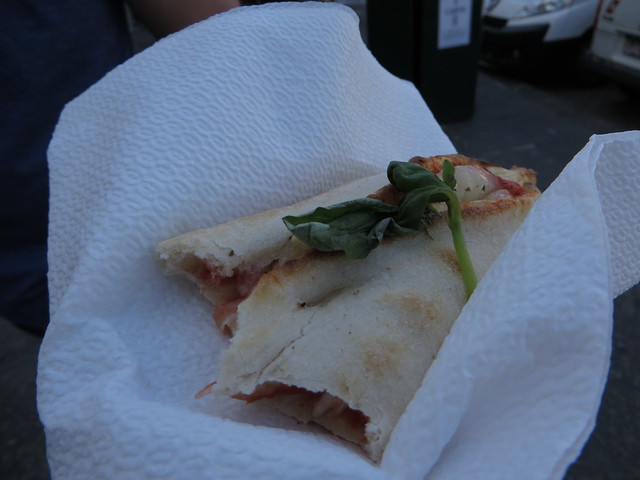 Looks decent, right? But it was raw inside.

Weary and angry, we would stumble upon the tour group once more, and I felt an odd measure of pride when I saw that they still looked just as disappointed as I did.

By the time we reached the water, someone told us that the grotto had opened. True to its name, Capri had proved capricious – the clouds had lifted just as we were leaving. The water around the island twinkled like a jewel. As it became smaller and smaller in the distance, I flipped it off, just for good measure. 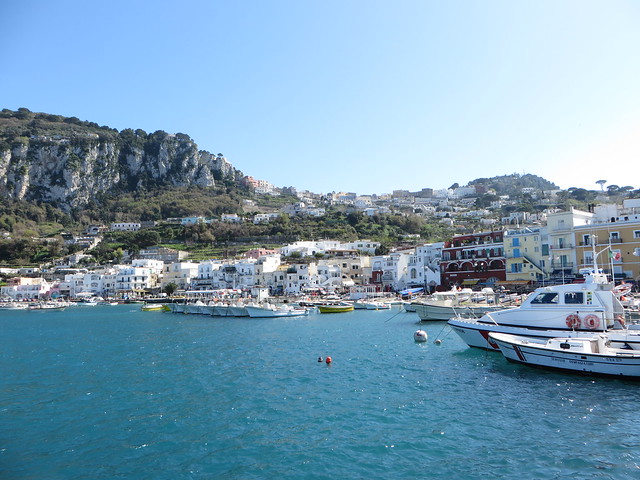 When we reached Sorrento, Rand and I shared a prosciutto sandwich the size of my head, and promised to never return.

Whenever we have mishaps in Italy, they feel oddly personal. I feel like my upbringing in an Italian household makes me immune to things that bother other tourists. I can handle crazy and illogical. I can handle eating pasta every day while people scream and wave their hands at one another. Those things are familiar and wonderful to me.

But our visit to Capri felt particularly cruel – because my family would never have let me down in the same way the island had. At any given moment in my mother’s or aunt’s home, someone is inquiring if I have eaten enough. They would never let me starve.

But Capri showed no such concern. And that, it seems, is one thing I cannot forgive.