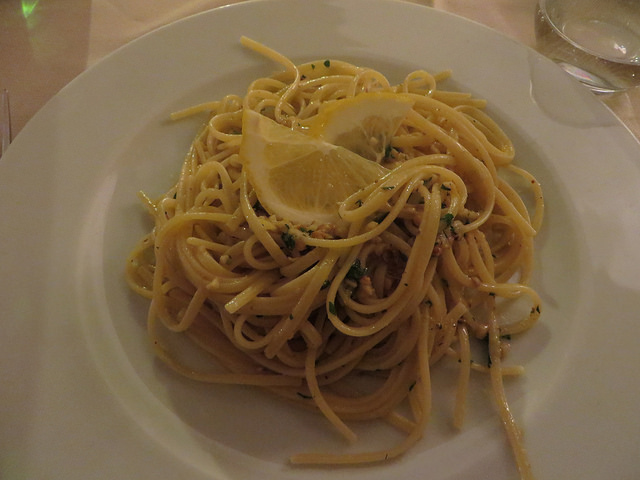 Many, many months ago, before life and travel got in the way, I had started to tell you all about our favorite restaurant in Amalfi: Taverna Buonvicino. I wrote about our first visit there, and how we loved it so much we went back again. 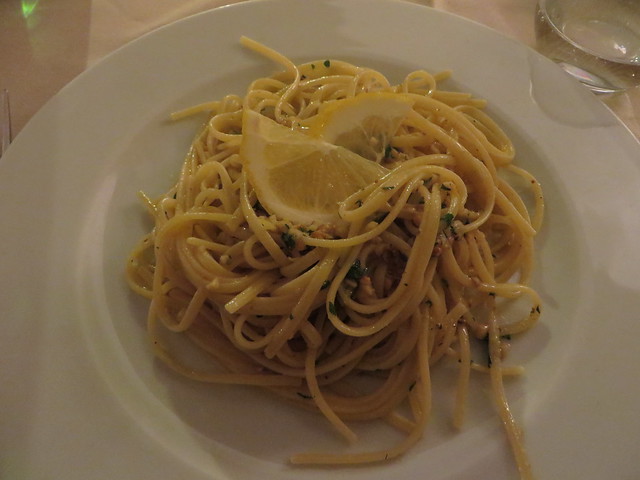 But I never finished that story. Part of me wondered if it was too late to mention it now. Our visit had been nearly a calendar year ago, and I found I could barely remember that meal or that evening. I forgot what we ordered. That it stormed through dinner and into the night, pausing just long enough for us to make it back to our hotel without getting drenched.

For these details, I have to look at my notes and my photos. Oddly, what has remained in my memory is the intangible: what I thought and how I felt. I know that each course reminded me of someone I loved. That some bites transported me back twenty years, others thirty.

That is the problem with Italy. Every new experience breaks my heart, because it reminds me of an old one.

Again, we were nearly alone in the restaurant – a phenomenon we couldn’t understand. Someone would explain that it was because it wasn’t quite tourist season, but even this fact didn’t help make sense of the matter. There were still people eating dinner out that night – we’d seen them on our walk – and I couldn’t fathom why they weren’t here.

The first course arrived – a plate of escarole, braised with capers and wrapped in anchovies and breadcrumbs, with crushed hazelnuts on top. 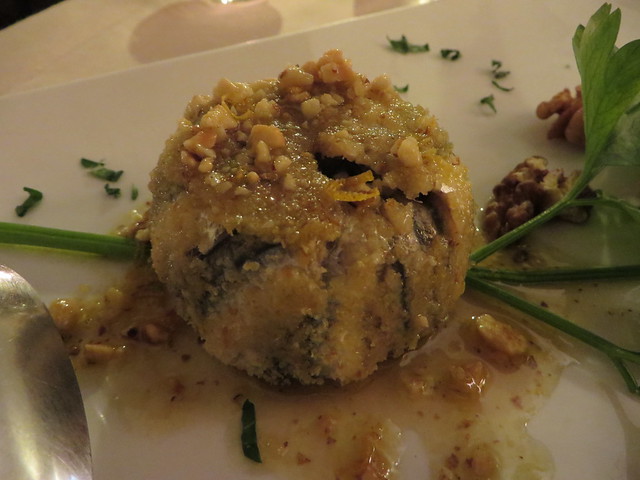 Rand took a few bites, but I ate the better part of it. I recalled the first time I tried anchovies. I couldn’t have been more than three or four. My grandmother had been making pizza, and she gave me and my brother each a piece. We both nibbled happily, until he hit an anchovy.

It was an unpleasant surprise, and I recall him screaming. I was too young to understand why. But I know that a spot of cheese on my piece was slightly burned, and it looked like an insect, so I, too, started screaming. We both discarded our pizza with our dear nonna, who took the half-eaten pieces, baffled.

Time would erase the damage done in that moment. I now love their briney, salty taste (though I still can’t stomach them on pizza). With bitter escarole, I’ve found they are excellent. In pasta, perfection. 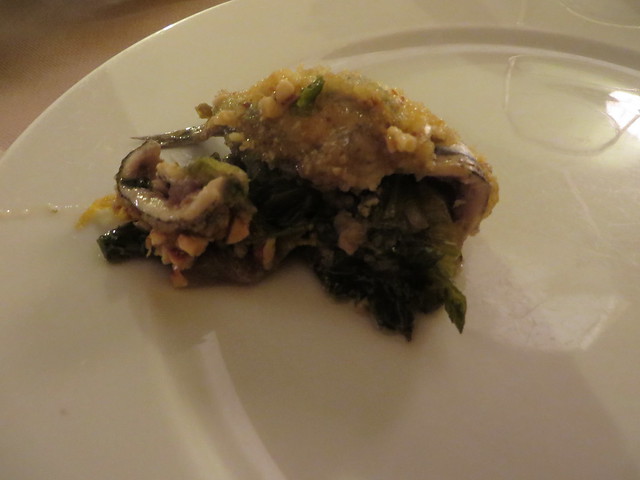 My second course was identical to the one I’d gotten on that first night – spaghetti alla colatura (a thin, oily anchovy sauce): 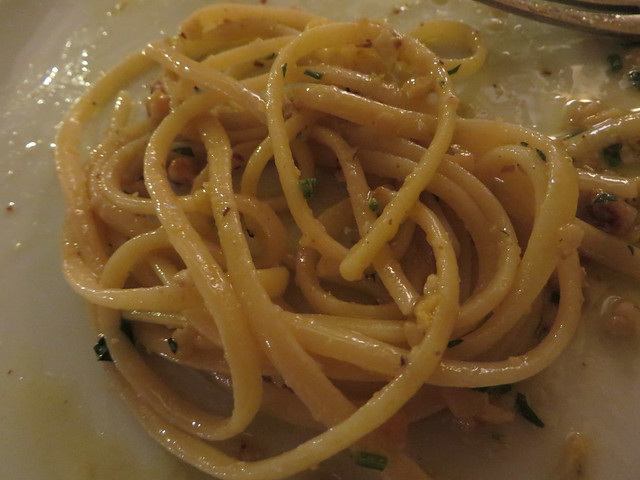 Rand’s pasta dish was rigatoni alla Genovese – a sauce of stewed onions and beef over pasta. And I conjured up another hazy memory of my grandmother cooking this sauce – a regional specialty in Naples – for my nonno. If I recalled correctly, he was the only one who really liked it, so she rarely made it. After I was 6 or 7, it would disappear entirely from rotation. But back then, they were still new to America. Still cooking and eating dishes like that. 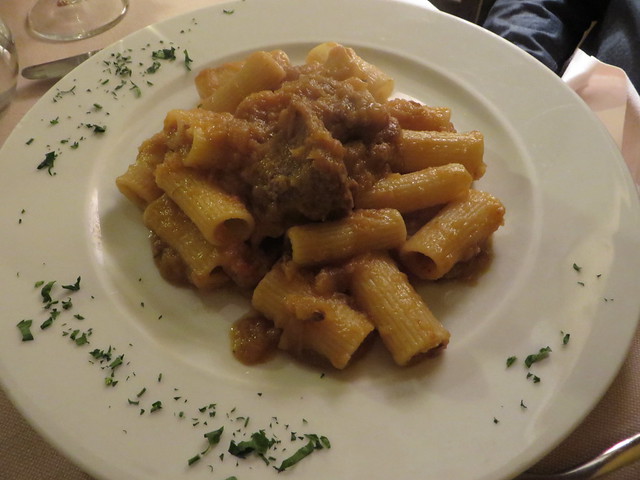 The stewed onions added sweetness to the savory sauce, and the meat was so tender Rand cut it with his fork. We had the same waiter from our first outing (Alessandro? Or was it Alessio?), and he said that it was his favorite. The chef made it for him whenever he asked.

We made such a fuss over this dish that the chef herself came out to see us, and wrote the recipe down on a piece of paper for us (signing her name, Enza, at the bottom). 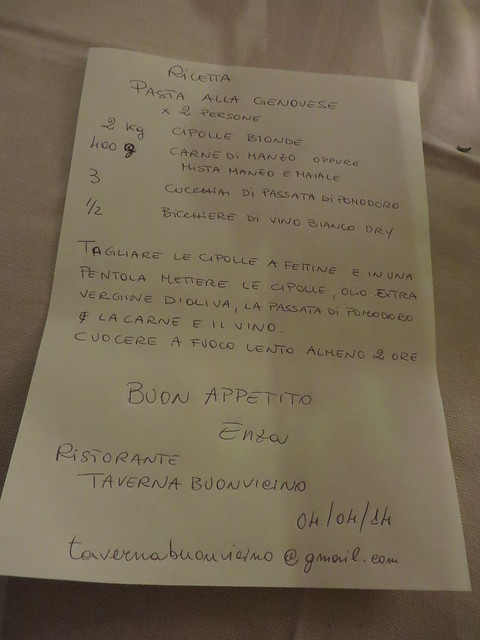 We tried reproducing it last fall. Unsurprisingly, it did not compare.

Our third course, we shared. Baby octopus on a giant artichoke, so warm that they steamed up the lens of my camera: 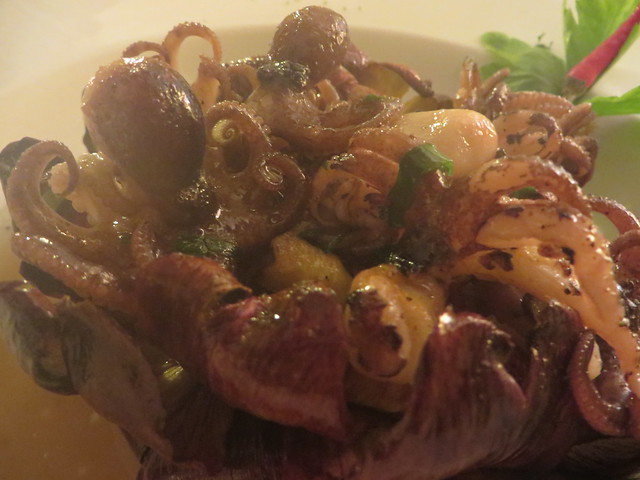 Seafood like this was rare in my house (my grandparents were from a mountain village outside of Naples, so all regional fish dishes consisted of the dried or preserved variety – anchovies or baccala). But artichokes were common – especially from my Roman mother. They were so labor intensive they, too, fell out of rotation as I got older, to be replaced with canned or frozen varieties. But when I was small, I remember mom spent half a day preparing them – rubbing lemon juice on the cut halves, steaming them for what seemed like hours. 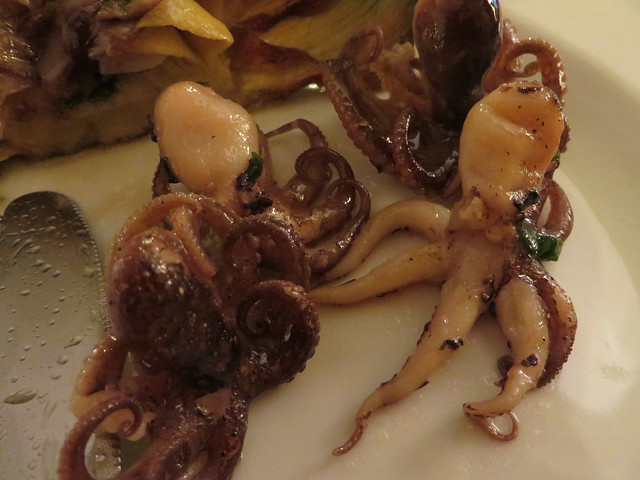 We sat in that restaurant, alone, listening to a crazy soundtrack. Chatting with Alessandro and Enzo. I thought about my family. About people who’d left me long ago. The ones I still thought of, nearly every day.

Rand sipped his Campari, while I dined on the past. 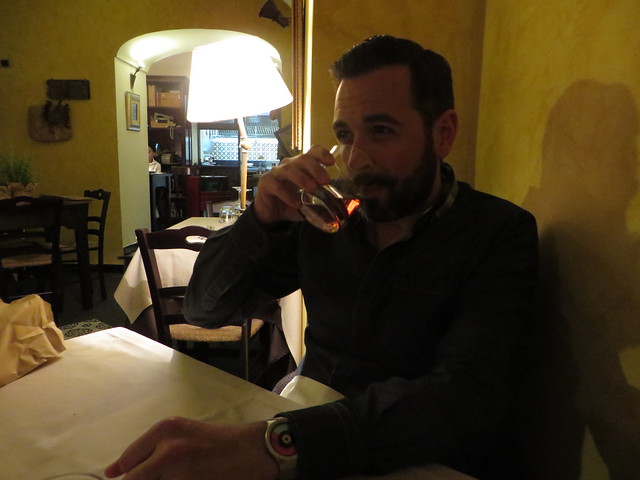