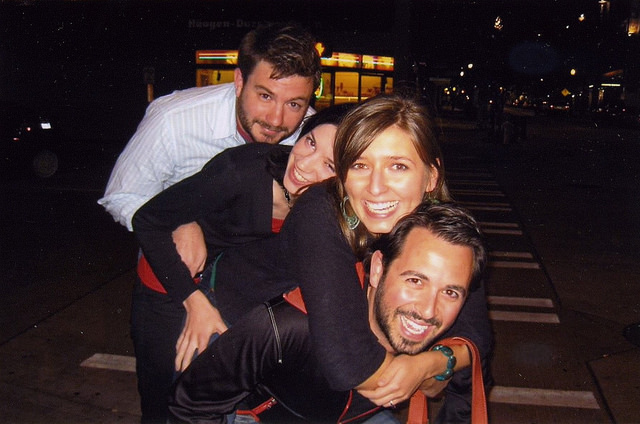 The past few weeks have felt like a confessional on the blog – a time to tell stories untold, to cast light on the dark corners of my memory. A while back, Mindy asked me if I’d included the story of The Wine (“I feel like it should be capitalized,” said Rand), now legendary in our shared personal history, in my book. 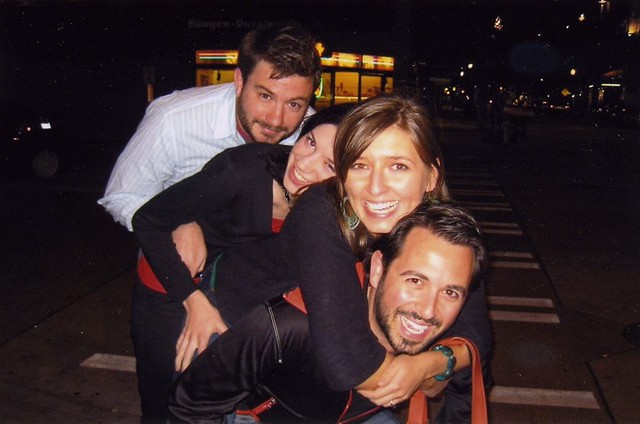 I shook my head, explaining that it didn’t fit with the narrative. I asked her if I should write about it on my blog, and her response was an emphatic yes.

I’ve told the story before, though not here. With each retelling the pain of the memory is diluted, the regret is eased, and it becomes almost funny, though not quite.

Besides, enough time has passed – we’ve had nearly a decade to recoup our losses. I’ve divided the amount up – $900 over seven years comes to just under $11 a month. For less than 36 cents a day, this story can be yours.

It begins with our friends Jake and Mindy. They were married in 2007, a detail which – forgive me, Mindy! – I had to look up. I couldn’t remember the date – only that her dress fanned out like a mermaid’s tail, that the cake was decorated with gerbera daisies, and I am not in this wonderful photo because I was the one taking it: 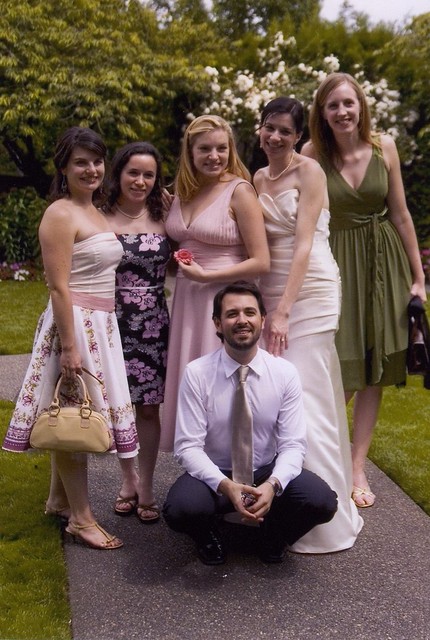 In light of this, the year becomes irrelevant: we were young and skinny and invincible once.

Rand and I lived in a one-bedroom apartment, the only windows of which faced east. It was the first home we shared together, and in the summer the light would turn our bare walls orange. I still drank wine then, and too much of it. We’d spend our evenings watching Anthony Bourdain eat food we could never afford and wondering if maybe things would one day get easier. If the letters from creditors would stop. If Rand would get his company out of debt. If anyone would ever read the things I wrote.

I say this not to garner pity. I’ve traveled enough to know that even at our most-cash-strapped moments, we had it better than good. We had a safe place to live and we could afford to buy food and hell, we had cable. If I thought it was excruciating, it was because I had no perspective. Now I realize it was also wonderful, in the way only your mid-twenties can be. When you are short of cash but long on dreams.

Every now and then, we’d pretend that we were grown-ups, with grown-up salaries. We’d splurge on pâté from Whole Foods or a pair of new shoes from the outlet store downtown. My husband’s credit-destroying debt nothwithstanding, we were dutifully responsible. Bills were paid on time.

Jake and Mindy went to Montreal on their honeymoon. Our gift to them was to be a dinner out. We called Au Pied De Cochon (recently lauded by Bourdain himself in an episode of his show), made a reservation in our friends’ name, and left the restaurant our credit card number.

Later, they called back, and asked if there was a price limit on the dinner. Rand explained that whatever our friends ordered would be fine.

“We have many expensive wines,” they noted. Some were over a thousand dollars.

Rand laughed, knowing Jake and Mindy would never choose anything close to that – not when someone else was footing the bill.

“Tell them to keep it under a thousand,” he said. I widened my eyes at him. He waved me off and mouthed, “It will be fine.”

I’ve questioned Rand’s actions, but not his motives. Those I understood: for a little while, let me pretend. In a consequence-free world, let the man on the other end of the line think that a thousand dollars is nothing to me. Let him think that our friends would order a wine like that, and none of us would blink.

But when our credit card bill arrived at the end of that month, we found his brief, indulgent moment was not free of consequence. There were consequences. More than 1300 of them. We decided that another zero must have been added to the bill erroneously. There was no other explanation.

Rand called, and the employee at the other end of the line told him there was no mistake – she gave him an itemized account of what was ordered. Poutine with fois gras, duck cooked in a can, a bottle of wine. This last item alone came to more than $900.

A nine-hundred-dollar bottle of wine. Rand was gobsmacked. He tried to inquire how this was possible. Did Jake and Mindy select it? Were they told how much it was?  Communication broke down with every question he asked. It seemed the person on the other end of the line – and indeed everyone else working at the restaurant – suddenly spoke only French and not a word of English.

And just to rub the matter in further, we noted that the staff had added a hefty tip to the bill.

We each reacted differently to the swift departure of nearly two months’ worth of rent from our bank account. He blamed himself. And … well, actually, I did, too. We were on the same page there. But while he was guilt-ridden and full of regret, I was enraged. I blamed all of Montreal. I’d been there once, long before that fateful dinner. I vowed never to go back. In the decade since, I’ve been true to my word.

I’m only punishing myself in this exercise. I know that.

Some weeks later, we had dinner with Mindy and Jake (at our home, because the prospect of going out was off the table, and would be for months). Rand gently inquired about that dinner. How was The Wine?

Jake and Mindy noted that it was good – the staff, they said, had selected it themselves. Rand and I exchanged a look. The puzzle pieces were falling into place. Our friends had not indulged on an extravagant wine of their choosing – indeed, they had no inkling that they were imbibing the most expensive bottle any of us would ever drink.

The employees of Au Pied De Cochon had chosen the priciest bottle on the menu, without going over a thousand dollars.

We were grateful for one thing, at least: they’d made sure that Mindy and Jake never saw the bill. For the better part of a decade, they had no idea. Rand would not tell them until many years later. We were celebrating something – I think it was the sale of Jake’s company – and we went out to dinner with our dear friends.

I cannot remember the exchange at the end of the meal. Only that Jake reached for the bill, and Rand initially protested before acquiescing. Yes, that sounds right. That’s how the story was unveiled.

I’ll let you get this one, because that bottle of wine you drank all those years ago? That alone cost almost a grand.

The look on their faces was confused. Incredulous. “We didn’t even pick it!” they exclaimed, and we nodded. We knew this already.

Now, from the spot of financial comfort in which we presently find ourselves, we force ourselves to laugh. The money is gone, The Wine long since consumed. Had events been otherwise, they would have faded from memory – a dinner purchased for our friends on their honeymoon – exceptional for that fact alone, but nothing more. But this story remains, shared between the four of us. We’ve made it our own. They drank the wine, not knowing what it was. We knew, but never tasted it.