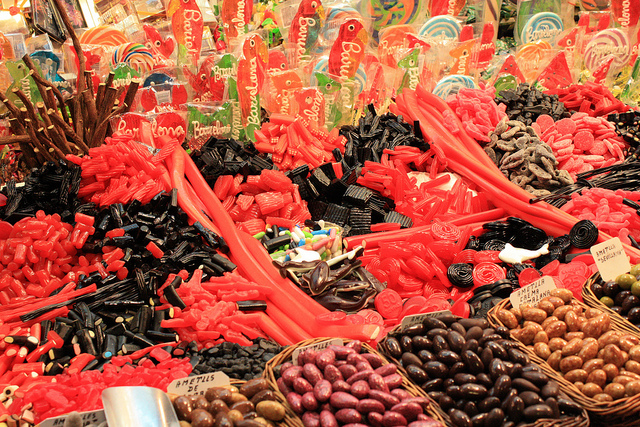 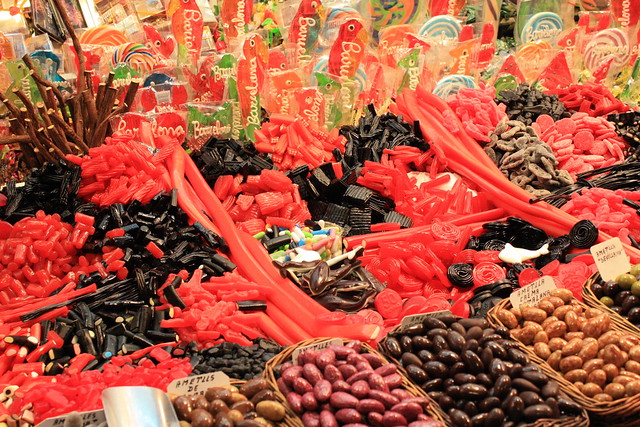 From a night market in Barcelona, where I wanted to eat all the things.

I am a sugar fanatic.

This should hardly come as a surprise to anyone who’s visited this site at least once (I have a category of posts labeled “Cupcake Death Match“). When the debate between sweet and savory comes up, I scoff, because it’s no contest.

When I snack, it’s something sugar-laden, like a bowl of frosted cereal, or an entire sheet cake. I have a bag of peppermint M&Ms in my fridge, and I regularly pull out a few candies throughout the day to munch on.

Starting at 8 in the morning.

My sugar consumption is slow and constant (indeed, the pound bag of peppermint M&Ms has lasted nearly 6 months). Occasionally, though, I’ll bake something, and then demurely eat half the pan. It’s an impulse control issue dating back to my childhood, when sweets were rare (no one in my family has a sweet tooth, and they are not bakers). If you happened upon a plate of cookies, the only sensible response was to mash as many into your face as possible in as short a time, because there was no telling when or if that would happen again. 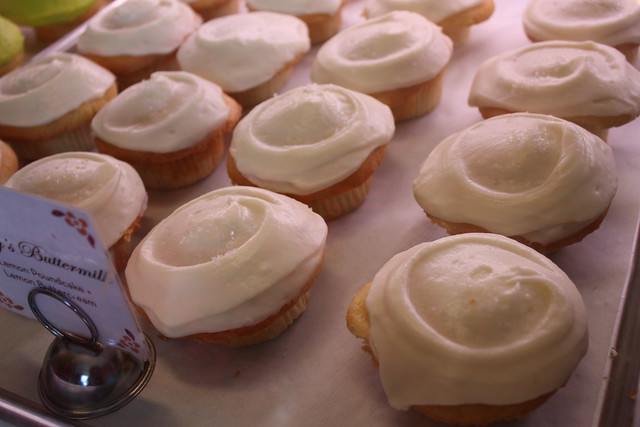 Literally some of the best cupcakes I’ve every had – from Philadelphia’s Brown Betty Bakery.

In college, I started baking. This was problematic for several reasons:

The easy out, of course, is to avoid baking, but that hasn’t really worked, because I love to do it.

These problems don’t abate while I’m on the road. If I’m in a new place, I want to try all the regional desserts. I feel the strange pressure of missing out (the concept of treats being scarce hasn’t left me). If there’s a bakery, I’ll walk into it, even if I’m barely hungry.

And if I am hungry? Brace yourselves, hide your children, and pray I don’t mistake your finger for a madeleine.

Our South Africa trip wasn’t different from the norm. We traveled, and I ate a lot of desserts. 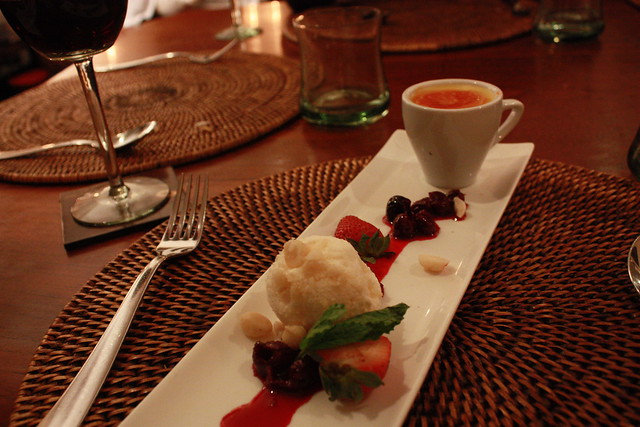 I even made cookie bars twice in our rental house. But as I was cramming these sweets into my mouth with all the restraint of a baleen whale inhaling krill, I realized something:

I wasn’t even enjoying my dessert.

I was skipping indulgence and going straight into overindulgence. It’s not really all that surprising. I’ve read countless stories about the addictive nature of sugar. One study claimed Oreos were as addictive as heroin. (I promise not to try heroin.)

So on the flight back to the U.S. from South Africa, I decided something: I was going to give up sugar for a month. My friend Marshall had done it with his entire family (including his children). I figured I’d give it a shot.

I also resolved to give up artificial sweeteners and natural ones, too. So no honey, maple syrup, aspartame, corn syrup, stevia, or anything else. I’d also avoid fruit juices, and try to limit my fruit intake to two servings a day. And I don’t drink anyway, so adding alcohol to the off-limits list was easy.

I was going to start the second our plane touched down, so I desperately crammed a few more cookie bars into my mouth as we began our approach to SeaTac.

And then I started my month without sugar. Here’s the play by play:

Day 1: Despite eating half a pan of cookie bars on the plane, I am still not satiated, and have no idea how I am going to last a month. I begin to pout. Rand laughs. My friend Sarah predicts I will last 3 days. Her husband Eric says I’ll survive for 3 hours. I think Eric is right.

Day 2: Discover that all my breakfast foods are filled with sugar. Even my supposedly healthy wheat bread has sugar in it. I make myself plain oatmeal with berries on top. I want to weep.

I find myself eating a massive amount of carbohydrates to make up for the lack of sweets.

Day 3: THERE IS SUGAR IN MY CORN CHIPS. What in the actual hell. Also, all I can think about, at any given time, is dessert. I realize that I’m an addict. There’s no other term to describe it.

Day 4: Rand notices that I’m quieter than normal. “You just don’t seem like yourself,” he says. And I’m not. I’m sluggish. And exhausted. And I really want a cookie. I guess this is withdrawal.

Day 5: I start looking up frosting recipes. Reading them makes me feel both better and worse. I start making plans for what I will bake when the 30 days are up.

Day 6: Go to a catered dinner with Rand and Nicci. Dessert is served, and they both encourage me to try some. I decide to break the rules, and take a few forkfuls. It’s wonderful – I feel like I can actually appreciate dessert again. But I can’t stomach more than a few bites. I start to wonder who I am.

Day 12: Thanksgiving. I accidentally get sugar-bombed – there is definitely sugar in the cornbread stuffing. I’ve told myself that I would allow myself a slice of pumpkin pie, but decide not to after last week’s half dessert and today’s accidental indulgence. It’s difficult … but not that difficult.

Day 15: We walk into a froyo shop, as Rand is considering getting dessert. Without thinking twice, I find myself eating a sample of white chocolate peppermint frozen yogurt. The reaction is mostly involuntarily – I don’t even realize I’m doing it. I understand now what addicts mean when they talk about triggers. This bite of froyo will haunt me for the rest of the month.

Day 17: We go out to sushi, and I learn that there is sugar in sushi rice.

Day 21: We go out to eat Korean food with friends. Everything tastes weirdly sweet. I know that there is sugar in bulgogi – I just didn’t realize how much. I only have a few bites – it’s not at all appetizing, even though this is a restaurant I love.

Day 22: THERE IS NO ADDED SUGAR IN GRAPE NUTS. I am so excited by this, I eat a bowl every morning for a week. It’s wonderful. I’ve finally stopped counting the days, too, which is nice.

Day 25: I eat an entire bag of corn chips in one day. What was the point of this sugar strike again? To be healthy?

Day 27: I tell Rand I’m bored. He stares at me, confused. This is one of the first times in the history of ever that I’ve said this. I’m never bored. It takes us a while to figure out what’s wrong, and finally it hits me: “It’s evening,” I tell him. “And cold out. You have work to do. What would I normally be doing right now?”

I realize I miss that process even more than I miss sugar.

Day 28: Everything that isn’t entirely savory tastes too sweet to me. Like eggplant. Eggplant tastes sweet. If it isn’t sour, I’m kind of grossed out by it. I eat fruit for dessert, and it’s plenty sugary for me.

Day 29: I’ve eaten dinner, but I’m still peckish. This has happened a lot this month – I normally save room for dessert, and since I haven’t been eating that, I’ve found myself still hungry after a meal. I have a craving for a cookie. Not the obsessive, gotta-have-it craving of earlier in the month. I just kind of want a cookie. Like a normal person. Instead, I make myself a glass of warm milk. 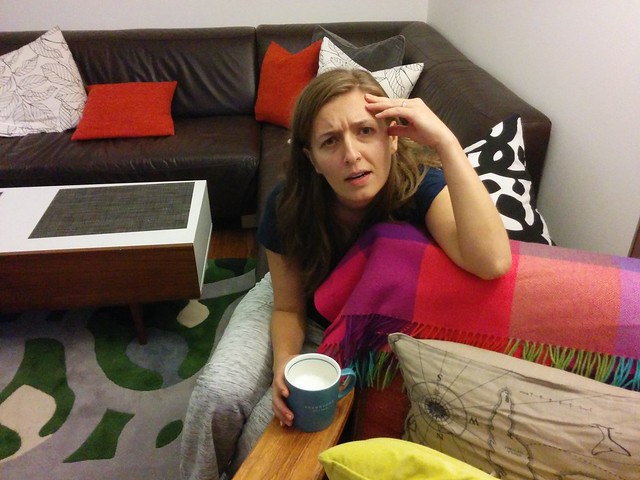 In my PJs, drinking warm milk, and having an existential crisis.

Day 30: I kind of can’t believe it. Besides the bites of dessert during week 1, the froyo incident, and the times I’ve been accidentally sugar-bombed, I’ve managed to do it. A month without sugar. I figured I’d spend today doing nothing but cramming sweets into my mouth, but right now I feel fine. I do want to bake, though. Maybe tomorrow, I’ll make some cookies. Maybe.

Mostly, I just wanted to see if I could do it – if the girl who adores sugar could actually kick it for a month. And I’m a little surprised that I managed to. It honestly became much easier as time went by.

I wasn’t trying to lose weight – it wasn’t a goal of mine. I’m okay with how I look, and I’m not really one for weird diets. I do like feeling healthy, though, and a month without the sick feeling of overeating is pretty great. And I happened to lose four pounds, despite the massive quantity of carbohydrates I ate.

I think that I’d become desensitized to sugar, and I’m really glad that I was able to take a break from it. Part of what I wanted to do was make sweets special again. To make dessert something singular and rare – something to be savored. In my world, that was no longer true. And now I think it might be again.

I’m pretty excited about that.

Isn’t it awesome that I get to live in a world where food is so plentiful, the only thing I have to complain about is voluntarily giving up sweets? It’s something I take for granted a lot, so I made a small donation to Northwest Harvest to celebrate the end of my 30-sugar-free days. If you have plenty to eat this season, and your biggest food worry is overindulgence, please consider donating to your local food bank. It’s a great way to feel awesome and get a little perspective.