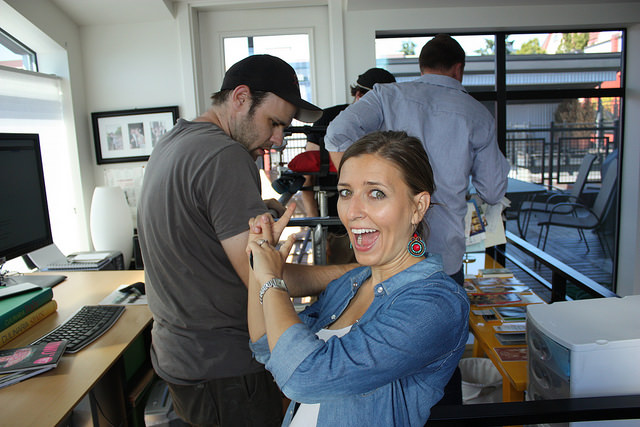 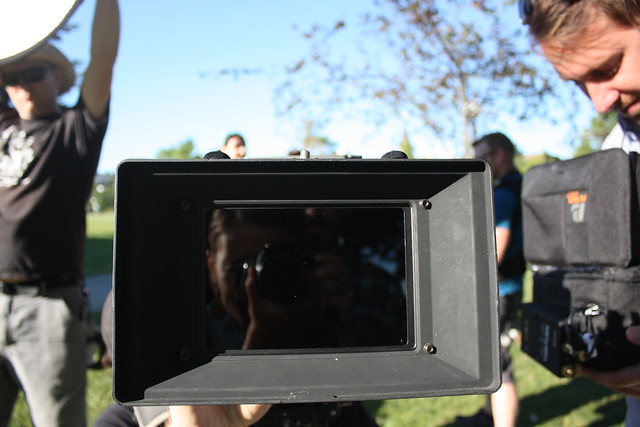 When my first boyfriend ever broke up with me (over the phone, on a school night, while I tried to hold back the tears), he gave me a list of reasons why. Among them: “You are immature, sarcastic, and fickle.”

I spent a good chunk of the next few years being haunted by his words, and doing my best to change. I wasn’t successful. A decade or so later, I told Rand about it.

“Um, yes,” he said, as though nothing could be more obvious. “Yes, you are. And those things make you awesome. That guy was an idiot.”

There are times when I am entirely comfortable with who I am. There are other times when I am not. Usually, it’s something I can ignore. But every now and then something happens that makes me take a long, hard look at myself. It’s excruciating. And also sort of wonderful.

On a rainy day in Philadelphia last spring, I had a phone call with Mariel from A&E Digital Studios. She told me that they’d found the blog interesting, and wanted to talk to me about possibly shooting a digital short for one of their online properties – FYI.tv.

I stared out the window of my hotel room, listening to the thunder rumbling in the distance, and tried to not sound too eager.

I was excited by the prospect of it, but I was a little wary – I’d been through this before. About once every couple of months, I get a phone call or email from a production company, asking if I’m interested in shooting a TV pilot. Sometimes it’s for a show based around the blog – sort of like Anthony Bourdain, I guess, but with more cake and less drinking. Other times, I’m just part of the cast – like a judge on a reality show competition that’s loosely based on travel, or a guide or host. 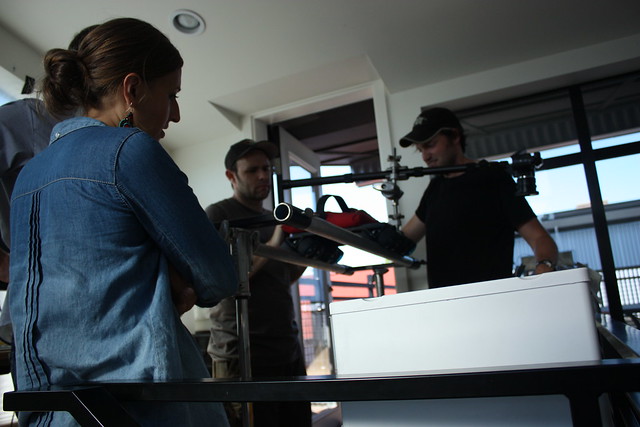 The camera crew, in my office. Which was, like, 90 degrees on that day.

These people sound really excited to talk to me, until they see me on video or have a conversation with me. I think that’s when my inner dorkiness comes out. Or they realize that I’m not inclined to the high drama that makes reality TV interesting.

“What happens when you fight with your husband?”

“Um, I don’t really fight with him. But when we disagree on something, we try to hold hands, because it’s really hard to be angry at someone when you’re holding hands. And then sometimes we go get fro-yo.”

This, obviously, would make for terrible TV.

So I was sort of delighted that, after a lengthy call with Mariel and her colleague, they still wanted to film a short with me. With dorky, ill-suited-for-reality-TV, makes-really-bad-puns me. It was going to be part of their “Inspired” series, which would appear on their FYI website.

So after I got back from Asia, a film crew came to my house. There were producers. And lighting people. And sound people. AND THERE WAS AN ACTUAL KEY GRIP (I’m not telling you what he does. Because I want to keep that special piece of trivia all to myself. And also, maybe I forgot.) 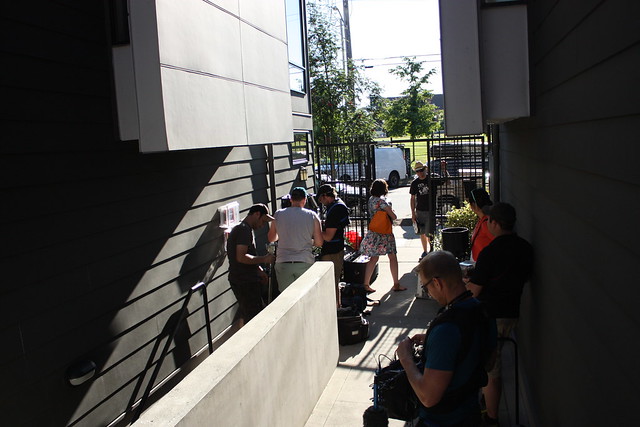 There were basically a bazillion people in my house. (Give or take a bazillion.)

They even had someone do my make-up. Her name was Kim. She was, as you’d imagine, totally lovely and had really great skin: 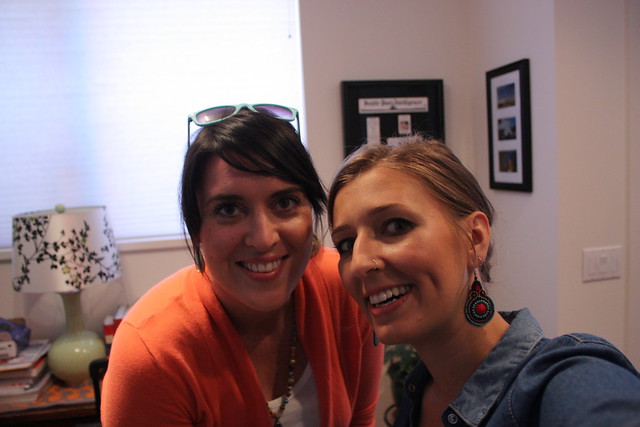 And I got to meet Mariel in person, who was cute as a bug and looks like Ginnifer Goodwin: 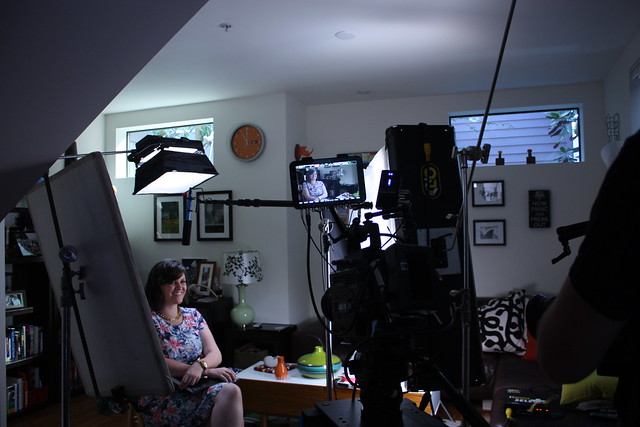 Mariel helping them get the white balance right (or something).

They rearranged furniture, and adjusted lights. There was equipment everywhere. 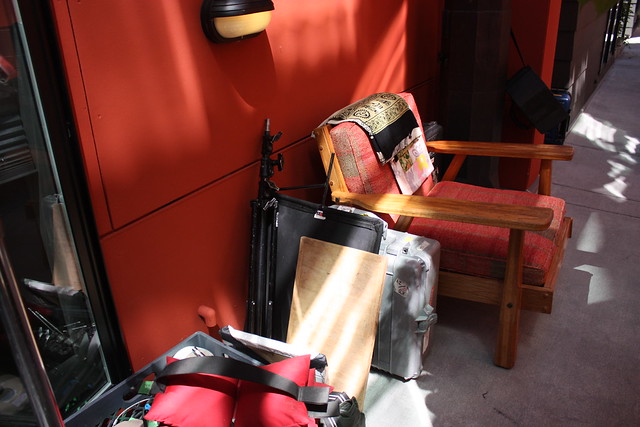 That chair is usually in my living room. My neighbors officially hate me.

They were all ridiculously, absurdly friendly. They laughed at my bad puns. They admired my collection of artwork featuring Jeff Goldblum. They helped me figure out what I needed to wear. And even though they did an impeccable job, they didn’t realize who they were dealing with.

I know I always say that I can’t dress myself, but it looks like no one else can, either. I just can’t wear clothes properly, without flashing my underwear. I mean, just look at how much of my bra is visible in this photo: 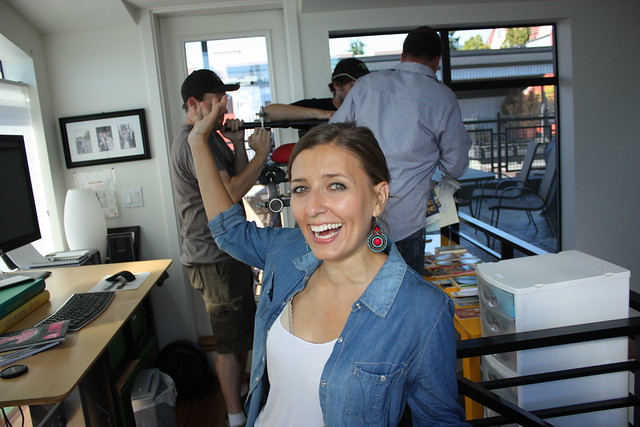 I am an absolute disaster.

THIS IS THE KIND OF POO THEY HAD TO POLISH. The absolute train wreck that is Geraldine. It didn’t help that I was very uncomfortable on camera. It was fine when we were just talking, but the second the red light went on, I panicked. I was stiff. And nervous. I guess I’ve just had too many TV-type-people be unhappy with who I am.

But they were patient enough to help me through it. We shot take after take. Some footage was taken in my living room. Some of it was in my office. 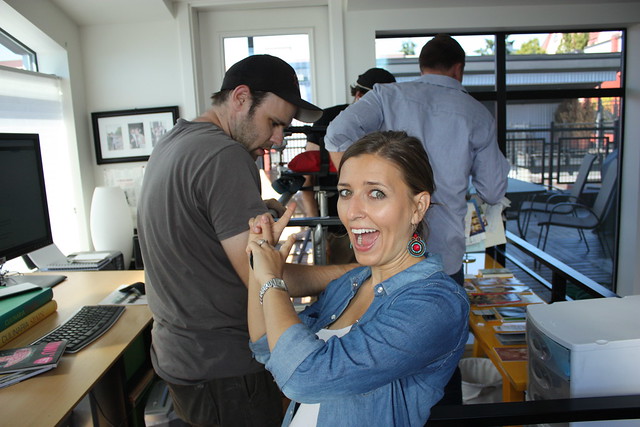 I love this photo, because everyone was trying to get work done and I was just standing there dorking out and making Mariel take pictures of it. #baller 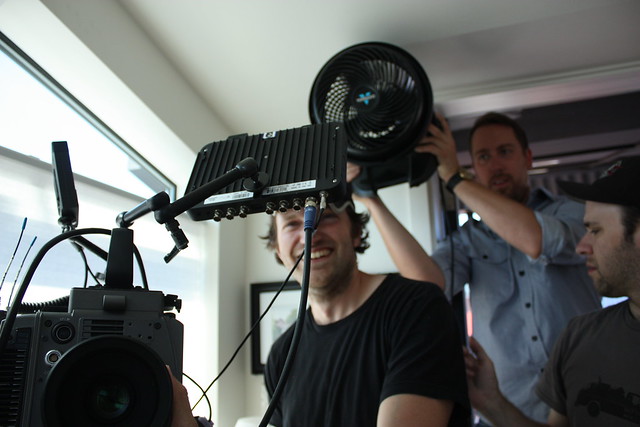 I think this photo is just adorable.

They even shot footage of me and Rand walking through the park, eating strawberries, which we both found to be somewhat amusing. 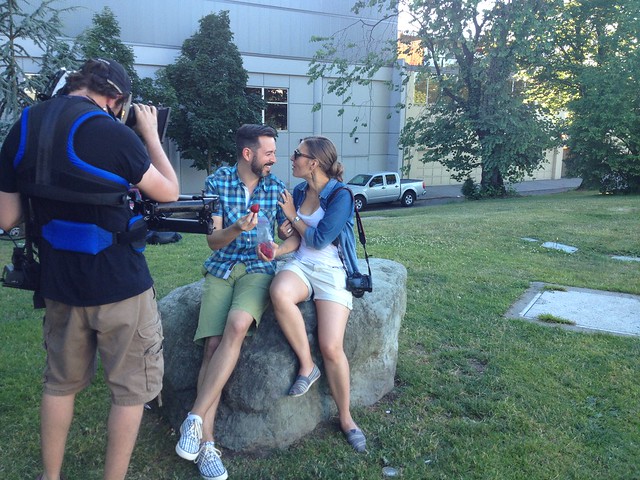 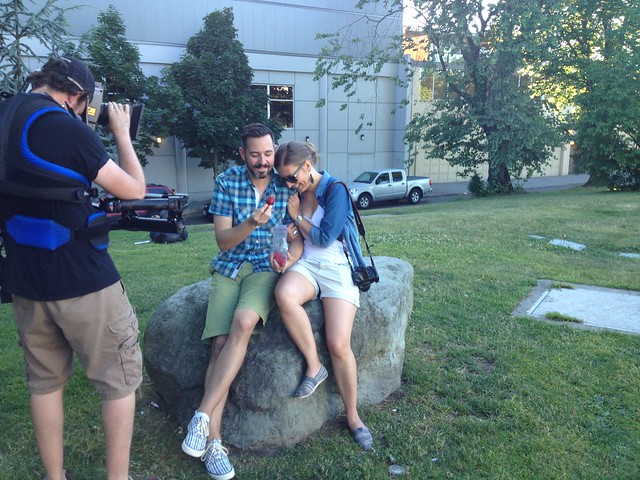 “NOW I WILL STARE AT THE STRAWBERRY.” 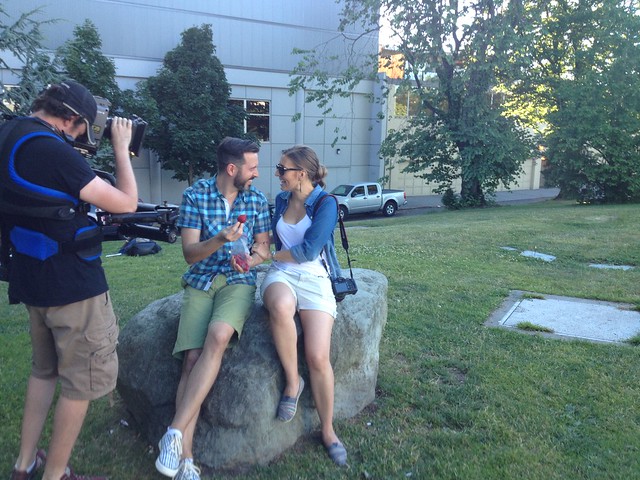 “PRETEND THAT THIS IS NATURAL.” 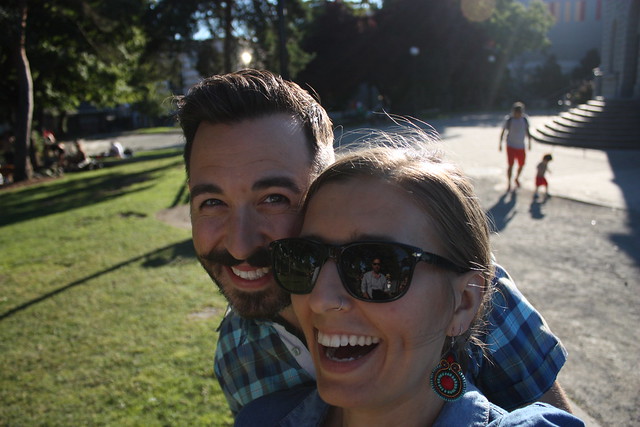 “JUST ANOTHER DAY SPENT IN THE SUNSHINE FEEDING FRUIT TO ONE ANOTHER. LIKE WE DO.”

By the end of it, I actually started to feel comfortable. Like maybe I could be myself on camera, and that wouldn’t be the worst thing in the world.

The crew had arrived at 9am, but we didn’t wrap until 7pm (they actually use terms like that – “That’s a wrap!” Someone really said this.) And that was it.

Just last week, Mariel sent me a link to the finished video.

The response from everyone has been amazing, but I find watching it a little mortifying. I’m so awkward. There are close-ups in which I can’t see anything BUT THE GIANT ZIT ON MY FACE. I bumble over my words. I don’t make a lot of sense. But you know what? That’s exactly who I am. I am mortifying. And awkward. And I don’t always make sense.

Everyone I’ve ever talked to in that industry wanted me to be something I’m not. The folks from A&E represented me as who I am. And if there are parts of it that I don’t entirely love, it’s only because I don’t love everything about myself. But I’m working on that.

Because maybe Rand was right. Those things I don’t like about myself, those things I keep trying to change? They might be the best thing about me.

Now … who wants to see my bra?

UPDATE: A lot of you emailed me to say you can’t see this video internationally. Good news – it’s now up on YouTube! Check it out, but for the love of all that is decent, don’t read the comments.