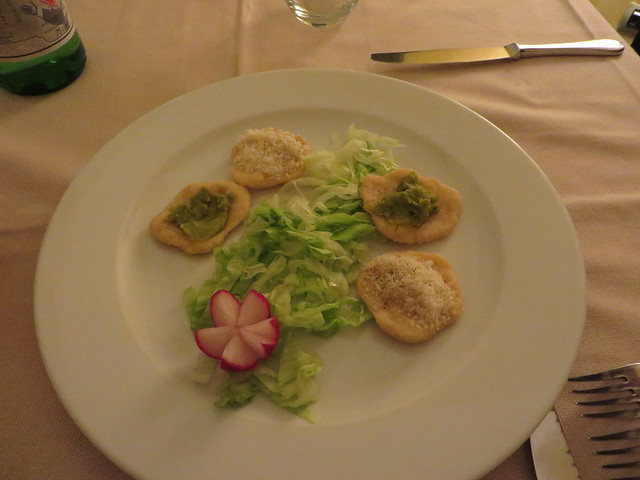 It is very, very hard to find a good, reasonably priced meal in Amalfi. Most places we went to were subpar. They could afford to be – they’d have a steady stream of tourists coming in regardless of the quality of the food. There were a few more restaurants that were staggeringly well-reviewed, but also absurdly ridiculous.

But what if you don’t want fancy? Or expensive? What if you just want good food at a reasonable price? And hey – cozy and candlelit with a charming waiter looks like a well-fed version of Ralph Macchio circa Karate Kid II wouldn’t be bad, either?

Then you should probably go to Taverna Buonvicino. 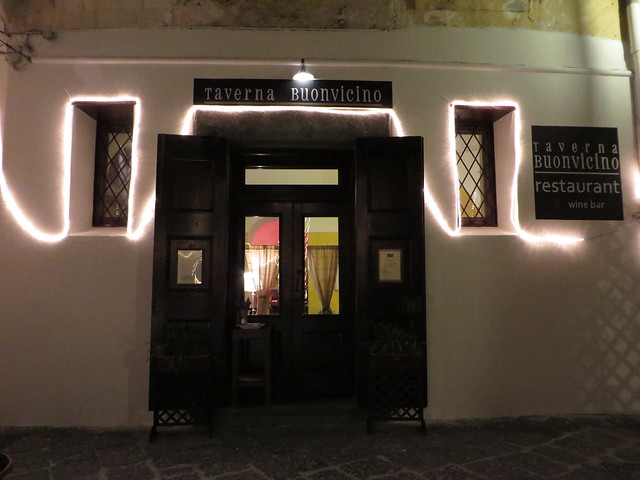 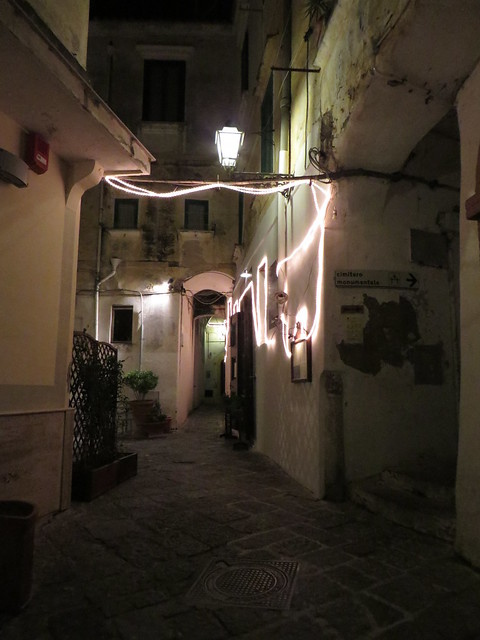 It sits just up and to the left of the Duomo, in a little courtyard.

It was our favorite restaurant experience in Amalfi. We liked it so much, we went back a second time.

The first night we ate there, we had the place mostly to ourselves. Our waiter, Alessandro (the robust Ralph Macchio doppelganger), eagerly answered all of our questions (he was excited to practice his English). We each ordered a pasta dish (regional specialties) and decided to split an entree. 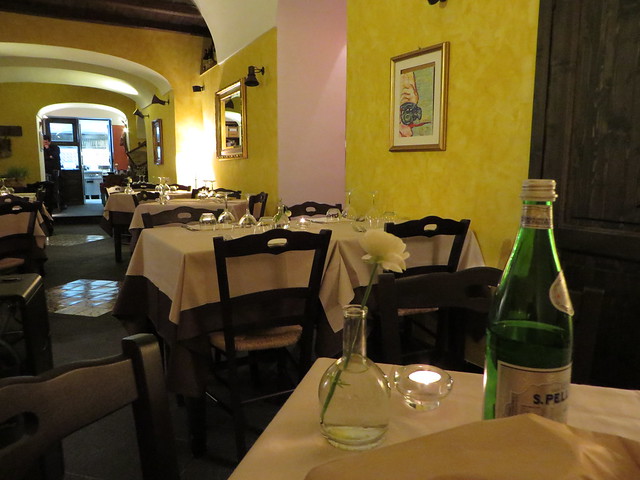 I cannot believe it was this empty. It’s a travesty, really. Perhaps because it was so early in the season?

The kitchen sent out little fried pizzette topped with either parmesean or crushed favas (I think). The dough was chewy and tasted faintly of olive oil, the cheese perfectly salty, the favas a little sweet.

I told Rand that it reminded me of the fried pizzas my mom and grandmother would make when we were kids – though theirs had been bigger affairs, unadorned with any topping besides a bit of salt. They arrived at the table between layers of paper towels to absorb the oil, and torn apart by us in a frenzy.

We weren’t even past the amuse bouche, but I was already thoroughly enamored with our restaurant choice.

I got the fettuccine a la colatura. I had no idea what it was until that night. Alessandro’s first question to me had been if I liked anchovies. 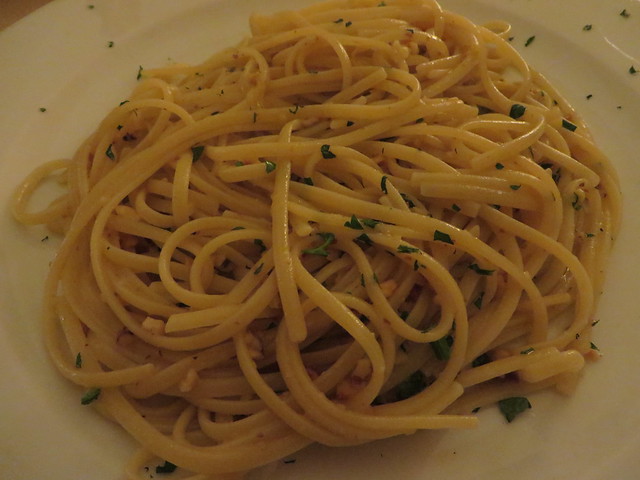 I nodded. As a child, I hated them. There was something unappealing fuzzy about the taste. But something changed around the time I turned 16. In my adulthood, I could not get enough of them.

Alessandro explained that the colatura is collected during the preservation of anchovies. The fish are placed in a wooden barrel with oil and salt, and a weight is pressed on top. The colatura is the briny oil that is collected at the bottom – now infused with the essence of the pungent fish that swam in it.

It literally comes from scraping the bottom of the barrel. And it is fantastic. Salty and fishy and a little bit earthy (from the barrel) and so unbelievably good. It’s entirely okay if you disagree with me. I don’t need to convince you that it’s wonderful. I can live with not sharing.

But I gave Rand a few bites, because he’s absurdly cute and he laughs at all my jokes. 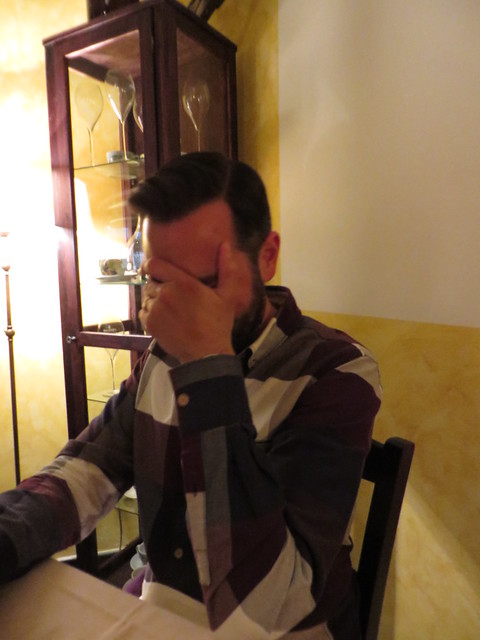 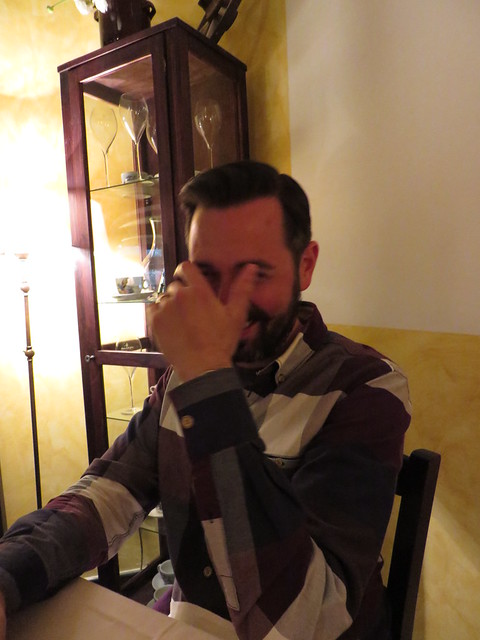 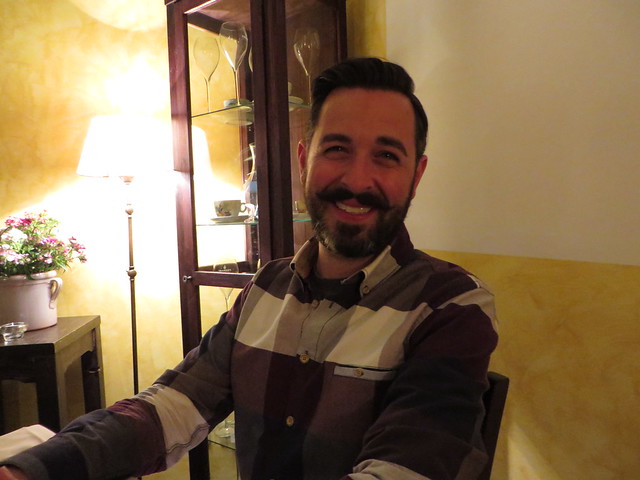 I don’t even remember what I said to make him look at me this way.

“Holy crap,” he whispered, and I smiled. (I love that when something is really wonderful, Rand feels the need to lower his voice. The sort of reverence that other people have in places of worship, my husband has in restaurants).

He ordered the lemon pasta, and let me be very clear: it is very good. Not too tart, light and refreshing, and frankly, an excellent counterpoint to the colatura. If you and your dinner date are inclined to share, one of each is the perfect way to go. But the colatura is better. It just is. 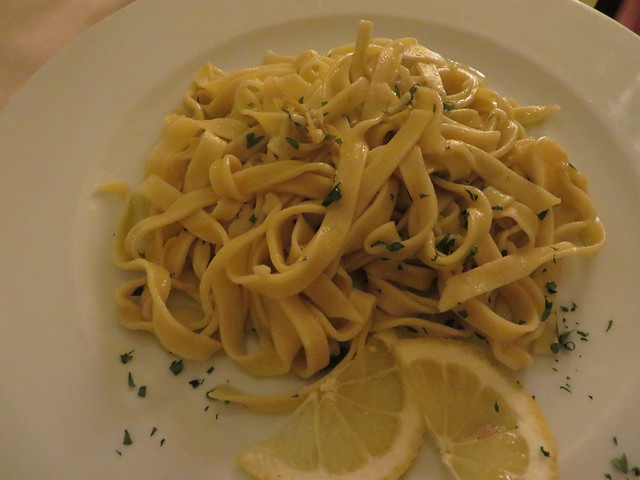 Our second course was grilled lamb, which was incredibly simple. Just a bit of salt, perhaps a touch of rosemary (I can’t really recall). It was a little gamey, but not in a displeasing way. I feel like flavors we are used to in the U.S. are amplified in Europe. We were slightly confused by the cut as well – it was different from the ones we were accustomed to stateside – but we were undeterred. 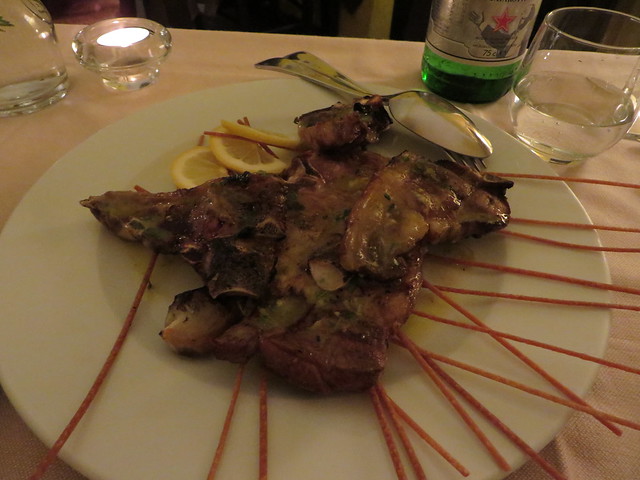 We opted for only one contorno – a dish of wilted escarole, the bitterness tempered by the addition of salty capers and olives. I loved it, but it proved a little much for Rand (I grew up with bitter greens – cicoria, mostly – and my fondness for them remains). 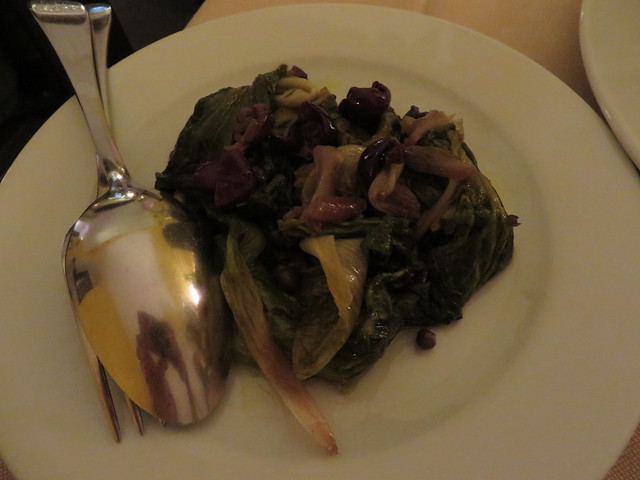 At this point, I should note, we were rather full, but there was no way we were not getting dessert. It would have been a crime and besides: Italian portions are far smaller than what we find here in the states. There’s no such thing as a “Mountain High Mud Pie”. Hell, the only things that are “mountain high” are mountains.

The local specialty around Amalfi is anything flavored with the local citrus, and in particular, the giant, sweeter-than-average lemons that can be found virtually everywhere along the coast. There are dozens of variants of it, but it is essentially a light, creamy cake that is delicately flavored with lemon (or occasionally with orange, as we had in Ravello).

I will be painfully honest when I say that I prefer my citrus desserts to be absurdly tart, to the point that your lips pucker and you wince, just a weensy bit. This was not that (indeed, most recipes I found derived the citrus flavor from only the rind). It was elegant and not-too-sweet, despite the massive layers of cream that surrounded it, but I still had to resist the urge to request a side of lemon juice to pour all over it.

But that was my only complaint, and really, it’s a personal preference, and not failure of execution. 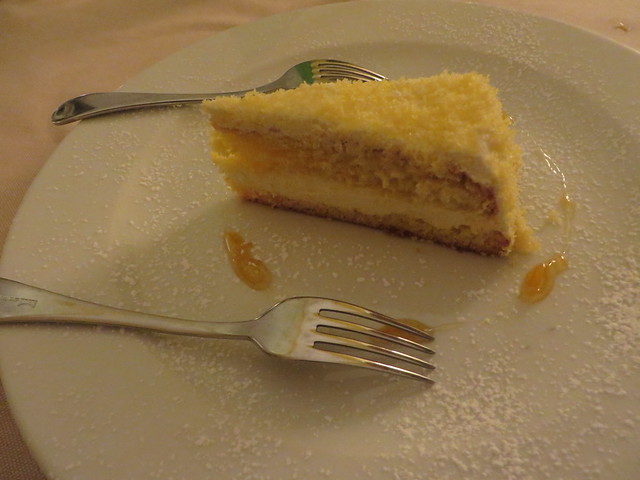 As we walked out into the night, I turned to Rand and said, “Why have we been eating in restaurants that aren’t this one?”

And sure enough, not the next night, but the night after, we returned to Buonvicino. I had intended to write about that here, but you know what? That night and those dishes deserve their own post. Stay tuned.