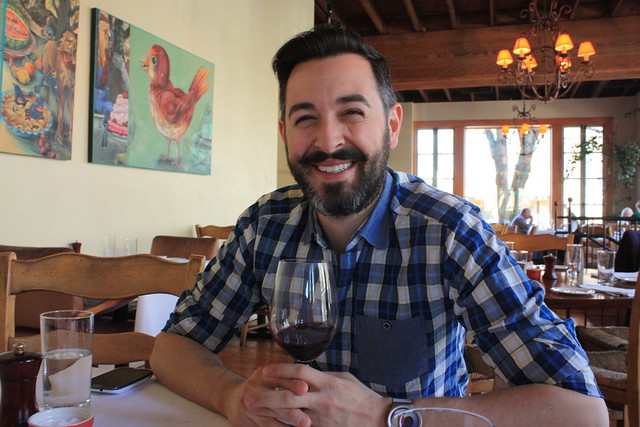 Things never seem to turn out how I imagine they will.

I don’t know if it’s because my expectations are too lofty, or if they aren’t lofty enough. But on some trips, things don’t quite fall into place. Nothing is how I envisioned it to be.

Later, I scroll through my photos and find that several which I thought were crystal clear are blurry and out of focus. There is some weird poetry in that, isn’t there? That not even my pictures are how I pictured them?

The Friday before last in Portland was one of those days. Things were not as I had anticipated. And that turned out to be a wonderful thing.

If you had asked me to predict my afternoon, I’d have said lunch from a food cart, eaten alone under a grey sky.

Believe me when I tell you: I would have been entirely okay with that. I’ve spent many afternoons in Portland by myself, contentedly noshing on something fabulous purchased from the back of a truck, and then wandering off in the rain.

But last Friday would have none of that. Even my weather prediction proved unreliable. The sky overhead was clear and blue, the air unseasonably warm.

I was snapping photos in Northwest Portland when my phone buzzed. It was a text from Rand, asking if I wanted to get lunch.

“YES!!” I wrote back, struggling keeping my exclamation points to only two. This was an unexpected treat. He had told me he was going to be busy for most of the day.

When I arrived, I found a restaurant so different from our usual choices, I checked my phone twice to make sure I had the address right. We normally gravitate towards hole-in-the-walls. Diners. The aforementioned food carts.

But this place was nice.

The dining room was bright and airy, enormous windows lining the entire facade. There were tablecloths on the tables. I think I saw someone wearing a suit jacket … unironically. This was madness.

Then again, nothing about that day made sense. It was a sunny and warm winter’s day in the northwest. My perpetually busy husband was free. I had arrived somewhere not just on time, but early. It seemed only fitting to sit my jean-clad self down at a table draped with white linen.

A few minutes later, Rand arrived. Smiling. Happy. Not all that stressed. He ordered a glass of wine, which I’ve seen him do only a handful of times. I resisted the urge to tell him we were in an alternate reality. I wanted to see where we’d end up. 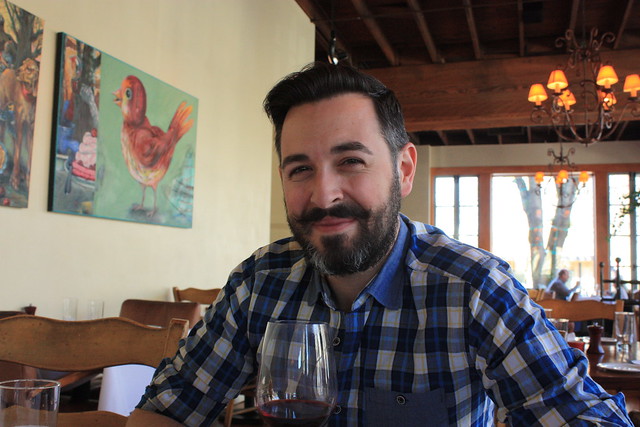 We split a kale salad to start. Rand doesn’t particularly like kale, but it was his idea to order it. 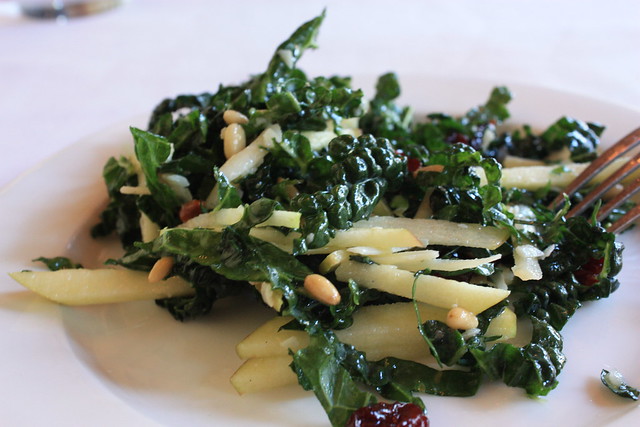 Remember how I said that sometimes photos I thought were crystal clear ended up blurry? Yeah. That.

A few bites in, Rand paused and looked at me. 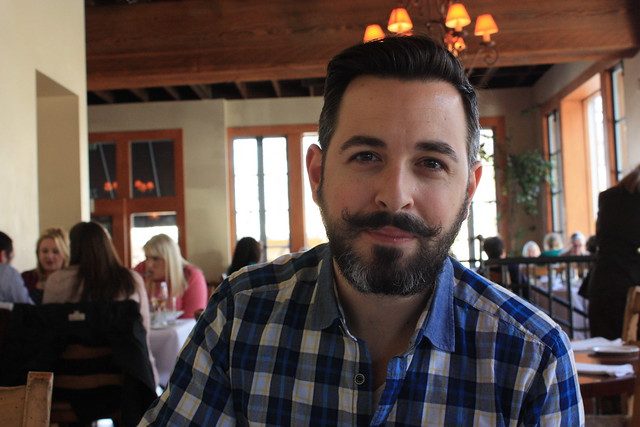 “YOU EAT YOUR KALE SALAD AND YOU STOP BEING SO DREAMY.” – Thing I should have said, but did not.

“This is really good,” he said. Unlikely praise for a kale salad, but so true. The earthiness of the leaves were made brighter by slices of tart apple and a lemon dressing.

I ordered the boar parpadelle, a distinctly Rand dish. He ordered the crab cavatelli in saffron cream sauce, which is the sort of thing I’d usually gravitate towards. 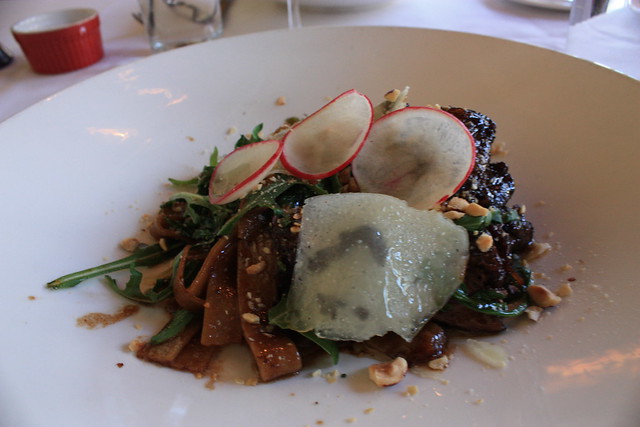 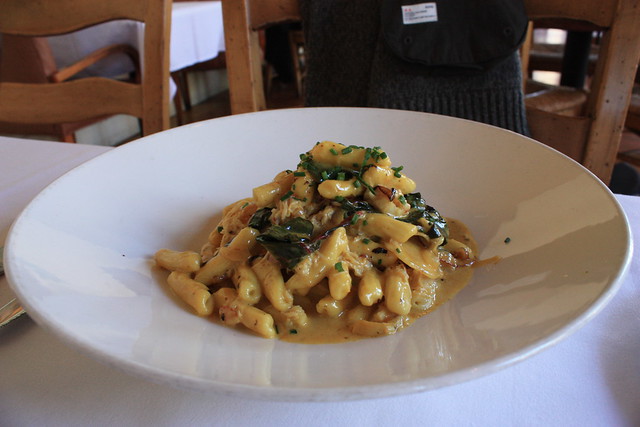 The food was lovely and luxurious. The sauce on my boar pasta was a bit too bitter and dark, but not unpleasant. I sprinkled a few grains of salt on top, which helped to cut through the richness.

Rand’s cavatelli were near perfect; a surprisingly mild and light dish, especially given that it was full of crab and cream. I’d expecting something decadent and briney. This was almost reserved.

I couldn’t quite tell you what we talked about. But he made me laugh, which isn’t all that surprising. 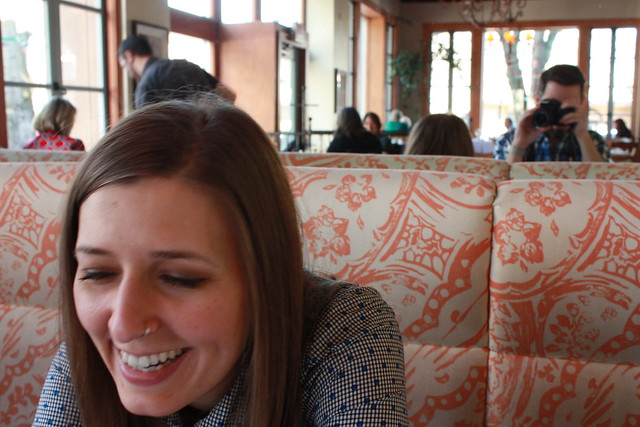 After our plates were cleared, he sat down beside me and took my hand.

“Take a picture of us,” he nudged. 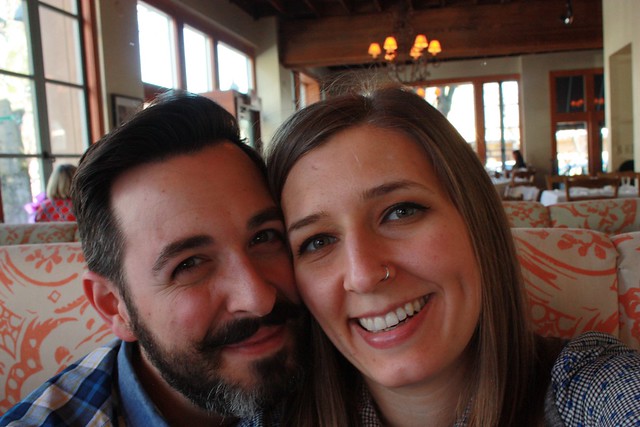 Later, we walked out into the sunshine. It wasn’t the sort of afternoon I had anticipated. Not the weather. Nor the restaurant. Nor the company.

Sometimes, things don’t turn out how you imagined. But they are nearly perfect, nonetheless.