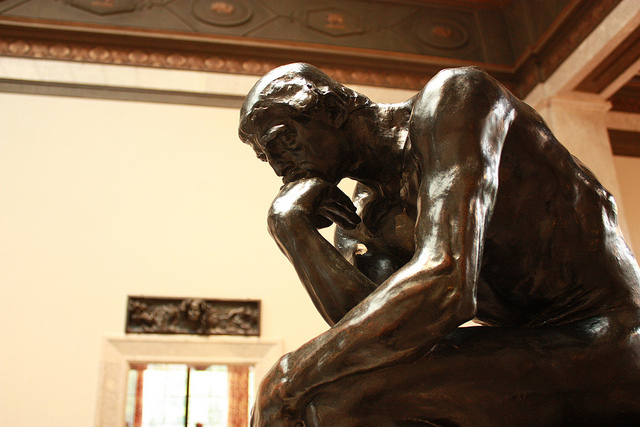 If there was anything I could tell my younger self (besides to maybe consider getting an MRI on your head sometime before the age of 30), it would be this: don’t fall for artistic types.

I would finally learned my lesson when I was 20 or so. No more musicians, no more painters. Even graphic designers and guys who played guitar on weekends were on notice.

What’s that? You have a band? And it’s something you are really passionate about? That’s great! Go away.

Perhaps it was unfair to blame my failed relationships on the creative outlets of my past paramours, but that was how it played out. I found that the artists I’d encountered were too tempestuous and self-absorbed, oscillating between an almost-delusional level arrogance and pitiful self-doubt. I had no patience for any of it.

I remember a too-quick goodbye with a young man who disappeared out my front door saying, “I have to go paint,” and that was it. I was tired of coming in a distant second to a blank canvas. I was done.

I’m not saying that I was right. Just young, a little emotionally immature, and tired of competing for attention.

You can imagine my delight when I discovered that Rand, while in possession of a creative mind and some enviable karaoke skills, cannot paint to save his life, and sucks – absolutely sucks – at Pictionary. There was no studio that he disappeared to until the early hours of the morning, no paint stained t-shirts, no cherished guitar in the corner of his room.

And as you can imagine, things have worked out quite well.

But old habits die hard, and while I thankfully did not marry an artist, I still find I’ve a soft spot for those tempestuous creative types. Don’t tell my husband, but here’s my dirty little secret: I have a bit of a thing for Auguste Rodin.

I know he’s wrong for me. For starters, there’s the whole matter of him being 140 years older than I am. (What on earth would we talk about?)

Oh, and then there’s the matter of him dying 63 years before I was born. (I guess we could talk about that.)

And then there’s all his issues surrounding commitment and faithfulness. Oy.

When Rodin was 24, he moved in with a seamstress named Rose Beuret. Two years later, they had a son together. The early years of Rodin’s career were difficult ones – his work was nontraditional, rough and realistic, often giving the appearance of being unfinished. His subjects weren’t royalty or the elite – he often chose people he knew. They were the working class, the poor, the elderly. His sculptures were imbued with humanity – imperfect, pained faces and bodies that conveyed emotion. It was all staunchly different from the style of the time. Rodin’s bust of Rose, made shortly after they met.

Consequently, a lot of people hated his work. He was miserably unsuccessful for many years.

During that time, he sought comfort in the arms of women across Paris, while Rose remained at home and took care of their son. Rodin clearly had some things to work out – some oats he still needed to sow, or whatever pithy maxim we use when someone runs around with their pants around their ankles. His most notable love affair, outside of his relationship with Rose, was with a woman named Camille Claudel. They met when Rodin was in his 40s; she was 26 years his junior (born the same year as his son).

But he had that dark, brooding thing going for him, and he and Camille fell rather hard for one another.

She was a talented artist herself, and the two of them inspired each other’s work. He refused to leave Rose, though, despite Camille’s requests, and eventually broke things off with his young lover to return to the woman who had mothered his child. In 1917, after fifty-three years of tempestuous romance, he and Rose were finally married. She died two weeks later.

Meanwhile, Camille succumbed to mental illness and would eventually die, alone, in an institution.

See what I mean? This is why I stay away from artists. But that didn’t stop me from visiting the Rodin Museum while I was in Philadelphia. He may have been a rather imperfect husband, and a mediocre boyfriend, and heck, probably not that great of a dad, either, but he was a nearly flawless sculptor. All the passion and drama that surrounded his life was evident in his work.

The museum is not terribly big, but I spent well over an hour there. There are self-guided audio tours, but as is my luck, I managed to arrive just in time for the docent tour, which was all kinds of wonderful. Our guide told us about Rodin’s love affairs, about the dearth of confidence and success and fidelity that characterized his life. If you have the chance to take the guided tour, I highly recommend that you do.

And while I didn’t want to like Rodin, I found that I still did (Damn it, did college teach me nothing?). It’s hard not to. Because as much domestic discord as he wreaked, he also made this: And, of course, this, which you’ve probably seen before: And The Kiss, which was one of my personal favorites: I mean, just look at it: Is this not, like, the most romantic thing you’ve ever seen? I’d encountered the sculpture before (most recently, when we were in Paris), but had never seen it in marble. There was something wonderful and soft and alive about this incarnation that I felt was lost in the bronze version. What I learned during my visit to the Rodin Museum, which I didn’t know before, was that the couple depicted was Paolo and Francesca, from Dante’s The Inferno.

The story, as you might have guessed, is a tragic one. Francesca, a noble woman, falls in love with Paolo, the younger brother of her husband. When her husband discovers the affair, he murders them both. They spend an eternity writhing in hell (because apparently infidelity is worse than murder, I guess?).

I remember my mother reading me bits of The Inferno when I was a kid (a point of my personal history which deserves extrapolation, I am sure, but let us simply leave it at this: my mother is Italian). And one part that stuck out to me was this: that even though Dante had sentenced the two lovers to eternal damnation, he couldn’t bear to separate them.

So they suffered until the end of time and beyond, but they were together.

The Kiss was not Rodin’s only depiction of the two lovers. He’d sculpt them again in The Gates of Hell. He had been commissioned to create a pair of doors for a new museum in Paris, but the building never came to pass. Long after plans for the museum were abandoned, Rodin continued to work on the doors – for nearly 40 years, up until his death. He’s struggling to hold on to her as she’s being pulled away. But like Dante, he nevertheless kept them together.

Rodin was known for reusing many of the figures he’d sculpted in other works. Here, near the top of the Gates of Hell, just beneath the three pointing figures, you can see The Thinker, one of his most famous works. Rodin spent a lifetime under criticism and scrutiny for his work. He was ridiculed for his depiction of the French poet Balzac; he was accused of sculpting his works directly on to his models (essentially using them as molds, instead of sculpting the work by hand); his work was rejected time and time again.

He led a tormented life, and in turn, he tormented the women he loved. But he was absurdly talented, and his work is pained and passionate and wonderful. And if you spend enough time surrounded by it, it’s hard not to be moved by all of it, to not feel a sort of tenderness for Rodin.

Nearly 100 years after his death, it’s clear: he’s still got it. It’s a good thing I learned my lesson long ago.

The Essentials on The Rodin Museum: