Observation: being jet lagged isn’t that radically different from being drunk. Your short term memory suffers, you find yourself in dire need of a sandwich and a shower (and briefly consider how you might tackle both simultaneously), and you litter your home with random articles of clothing. 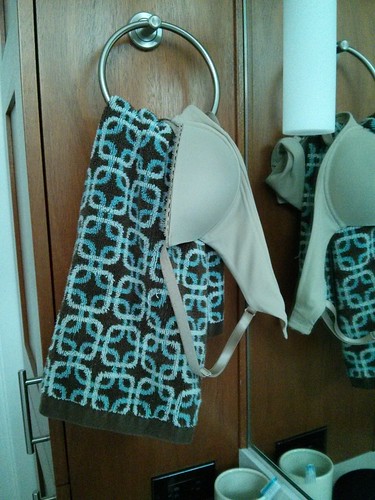 Note to self: next time you decide to post photos of your undergarments to the your blog, consider picking a slightly prettier pair.

You know, it just occurred to me that the above photo looks a little crass. Here it is again in black and white: 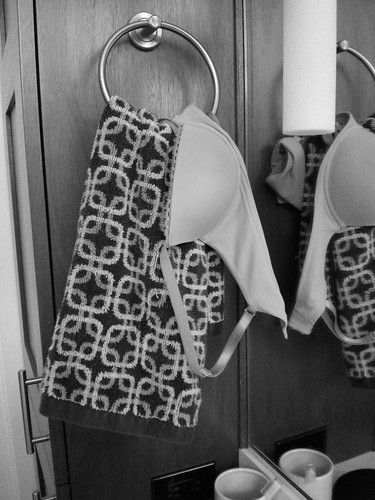 That is my bra, which, in a sleep-deprived hazed, I seem to have left on the towel rack of our bathroom sometime on Saturday, shortly after we got back from Europe. I have zero recollection of having put it there. I’m not even entirely sure why I took off my bra in the middle of the day (though to be fair, it was something like 1 am in Paris, which is a perfectly acceptable hour at which to not be wearing a bra). I suspect it had something to do with the subsequent nap I took.

Later, feeling somewhat refreshed, I got dressed and headed to our friends’ wedding reception. There, I had a slice of cake that was so good, I might have proposed to the woman who baked it, promising her that we could be really fat and happy together.

I also had one and a half drinks which, as some of you know, is enough to make me forget that I can’t dance. I crawled into bed near midnight, humming indie rock love songs. And Sunday morning, when I went into the bathroom, I saw this: 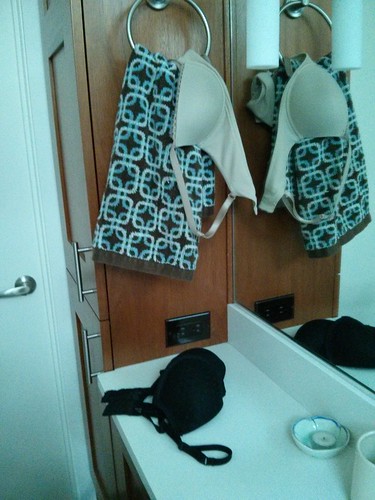 Another bra has arrived. Clearly, this bathroom is their spawning ground. Soon, this land will be crawling with tiny little training bras.

No recollection of how that one got there, either. If a third one shows up, I’m blaming poltergeists.