Skip to content
Posted in: Nothing to Do With Travel, Rants and Raves, WTF, WTF Wednesdays 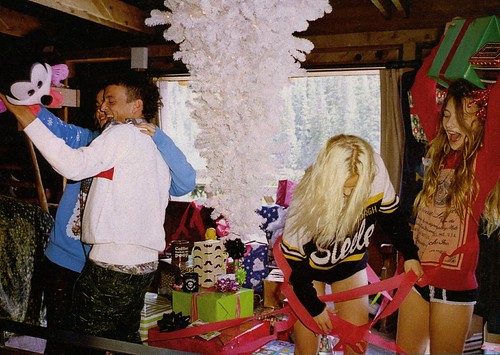 OMG. This is EXACTLY what Christmas morning looks like at our house.

Apparently a lot of folks are currently outraged at Urban Outfitters for their most recent catalog, which is full of expletive-filled products. The hub-bub seems a bit unfounded. Let’s be fair – how can one celebrate the birth of Christ without a giant banner that reads “Merry Christmas Bitches”?

This season, they seem to be offering a wide array of “edgy” products that have people up in arms. Like these photo albums: 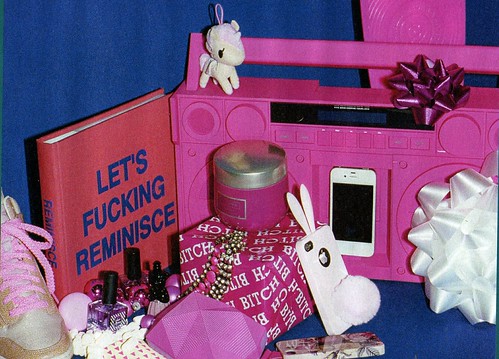 “I’m totally buying this for my in-laws!” – no one 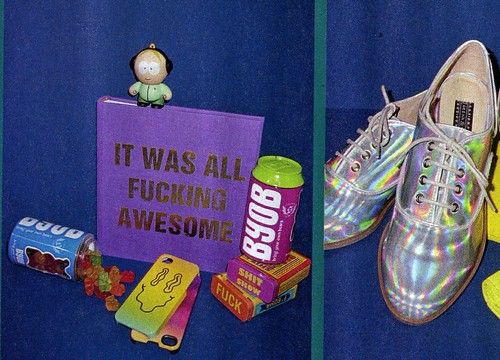 You know what? A “BYOB” can full of gummi bears is actually a brilliant idea. I should keep several in my car in case of emergencies.

Or this festive little candle, which I’m sure would look great in your stepmother’s guest bathroom: 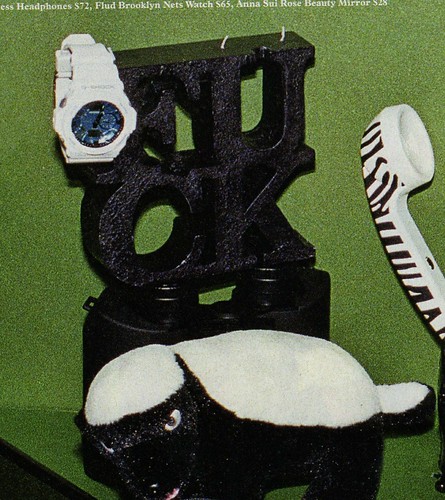 And what holiday season would be complete without a glass featuring Santa that reads, “Merry Christmas, Bitches”? (Seriously, I’m sensing a theme, here.) 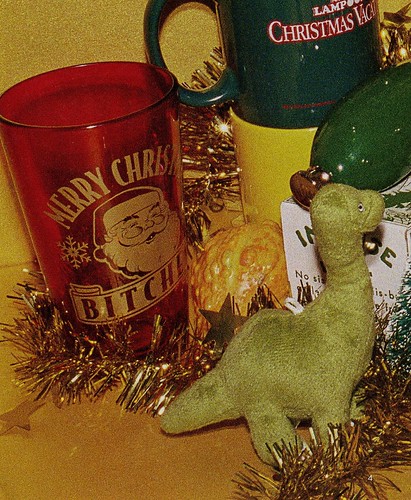 I’m gonna get this for all the Jews in my life!

This stuff doesn’t really bother me. On a good day, I swear like a sailor. On a bad day, I could make Samuel L. Jackson blush.

Of course, that doesn’t mean I’m happy with Urban Outfitters – I’m fed up, though for entirely different reasons. Over the last decade, the store went from being one I adored (but could not afford in the starving years of my early 20s) to one that I am distinctly too old for. It is a indication of the relentless passing of time, much like when I realized the Olson Twins had gotten boobies.

Needless to say, I am suitably horrified.

Last time I visited Urban Outfitters (or “UO”, as I presume the kids would say, since they seem to hate spelling things out. AMIRITE?), the manager, who was easily a decade my junior, asked me if I was looking for a gift for someone. The unspoken message was that I was way, waaaay too old to be buying stuff for myself.

I mumbled something about how I had wandered away during our senior home outing, and proceeded to admire what I thought was a belt. It turned out to be a mini-skirt.

(Also, when did midriffs come back in? I thought, like the Leprechaun canon, we said goodbye to those horrors in the mid-nineties.)

Aghast, I retreated towards the door, mumbling something about how I needed to be home before Jeopardy!

I’ve pretty much stopped shopping at UO altogether, except to purchase the occasional “granny-style sweater” (worn unironically!), but I do still receive their catalog. It makes me feel positively ancient.

The worst part of it – more so than the clothing – is the scenarios that play out therein, the Lord-of-the-Flies-like vignettes that make me want to scream, “NO, CHILDREN, NO.”

Dear god, I am old. And so keep that in mind: this post contains the ramblings of an old person. If you don’t like it, simply smile and nod, and get me a glass of hot tea. The way you would when your grandmother starts yelling at TV commercials.

This is how the catalog begins: with the image of a young woman, sitting atop a phone booth in the middle of the woods. 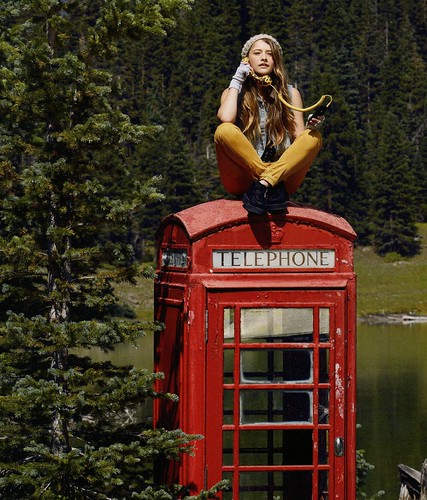 Let’s ignore the obvious hair-pulling observations that one could make about this scene (“Why is there a phone booth in the woods?” “If she’s cold enough to wear a hat and gloves, WHY IS HER SHIRT SLEEVELESS?”) and instead focus on what she’s doing: she’s making a phone call on her cell. While sitting a top a phonebooth. And if you look closely, she’s apparently plugged an old-fashioned telephone receiver into her cell phone.

That is now a thing, in case you were wondering. 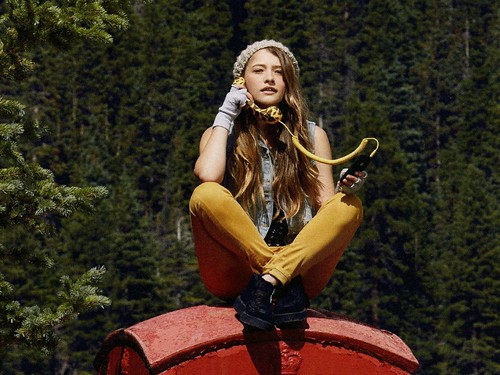 The phone is yellow leopard print because … because … THERE IS NO REASON.

Dear god, we’ve just started, and I already need to lie down.

Let’s move on … to a bunch of young people delightfully hurling presents into the water. 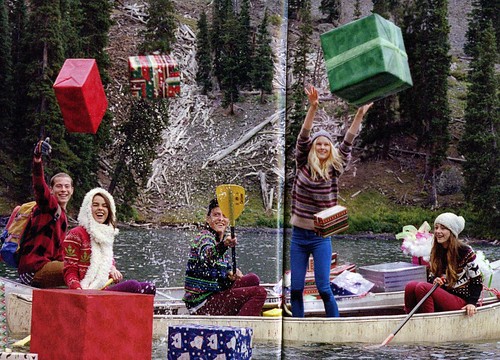 “ZOMG! Bourgeoisie excess is SO much fun!”

Everyone knows that kids imitate stuff they see on TV, movies, and in trendy catalogs. Our rivers are now going to be FLOODED with unopened Christmas gifts, and we’re going to have indigenous wildlife choking on ribbon and lace panties.

That is no way to die. (Unless maybe you are Keith Richards.)

Seriously, who is taking care of these kids? They’re clearly neglected. In this scene, these little urchins are so hungry, so lacking in social graces, that they’ve taken to eating turkey right off the carcass. 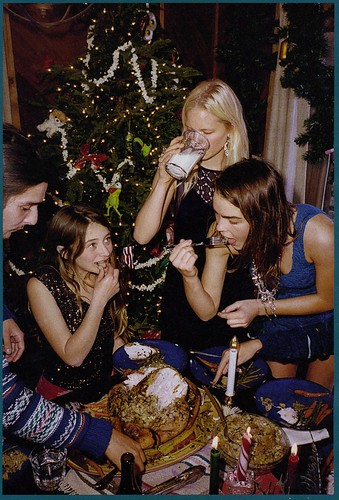 I actually can’t judge them too harshly for this, as it’s my preferred method for eating cake.

I suppose it’s just good to see them eating. But honestly, what if they had to have dinner with the Queen, or someone equally fancy, like Martha Stewart or Mr. Belvedere?

I’m sincerely worried about these kids. They seem to be out in the woods, but I’m not sure they have the skills to survive out there. Take this poor girl at the top of this snuggly scene, who appears to be freezing: 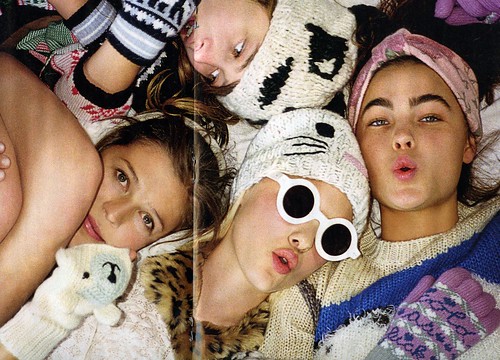 Did no one teach her about pants? I can almost guarantee they warm you up more than no pants.

And when, pray tell, did it become acceptable to stop matching our socks together? Do you know what my parole officer would say if she saw me running around like this? 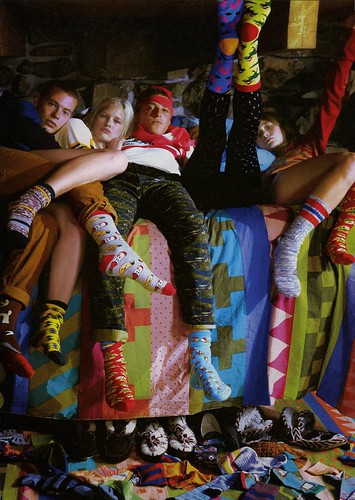 AND AGAIN WITH THE NO PANTS.

(Note: At this point, I just started screaming directly at people in the catalog. Because clearly their mothers aren’t around to do it.)

Just what the hell were you thinking, missy? WE HAVE FAMILY PHOTOS IN TWENTY MINUTES. Also, you’d better not get glitter marker on the couch because you know how your father feels about glitter. Also, HIS NAME IS DAD AND NOT “ROBERT”. CUT THAT FIRST NAME CRAP OUT. 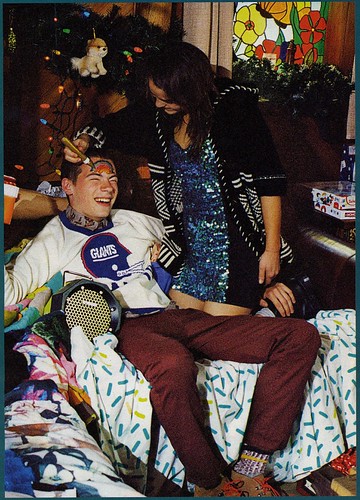 On an entirely unrelated note, your cardigan is cute.

While I appreciate the handiwork that went into it, this is NOT how we use frosting, young lady. We PUT THAT ON CAKES, which we then eat in a completely non-sexy way, while wearing pajamas that are oversized and equally non-sexy. 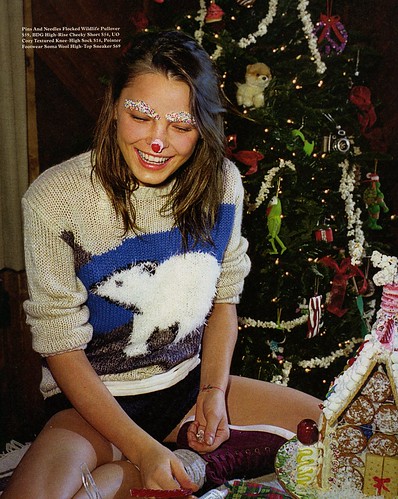 And I feel like a broken record here, but PANTS. IT IS DECEMBER. PUT THEM ON.

NO NO NO YOU AREN’T EVEN ACTUALLY KISSING EACH OTHER. You are just mashing your faces together in an attempt to look cute. Which is arguably working quite well, but STILL. 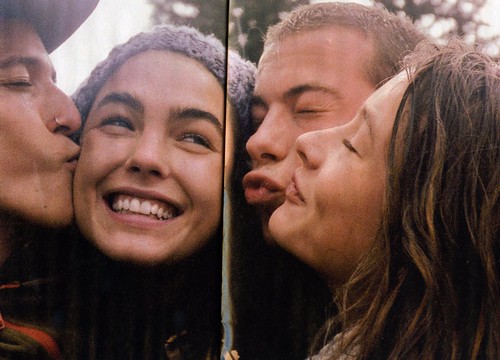 Fine. This is pretty damn adorable. What product are they selling again?

Sigh. All this CapsLock yelling is exhausting. Can we see something a little less shout-inducing? 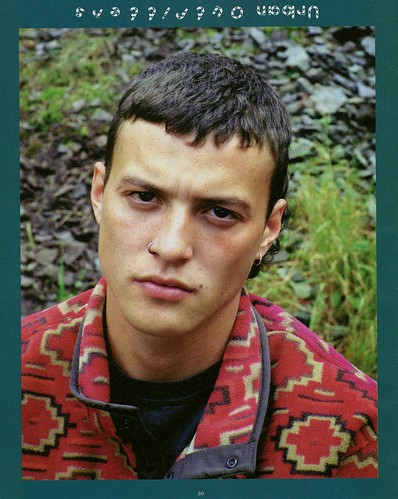 Aww, you look upset. Did someone take your bike? Huh, little guy?

Okay, you know what? This young man is adorable. He almost makes me forget my rage. Seriously, doll-face, call me in 20 years when you are old enough to grow some chest hair, okay?

Wait. Wait. WAIT. There’s something by your ear. What is that? 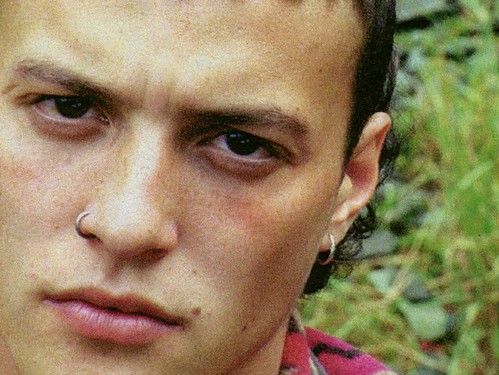 I just need a closer look. That can’t be what I think it is. 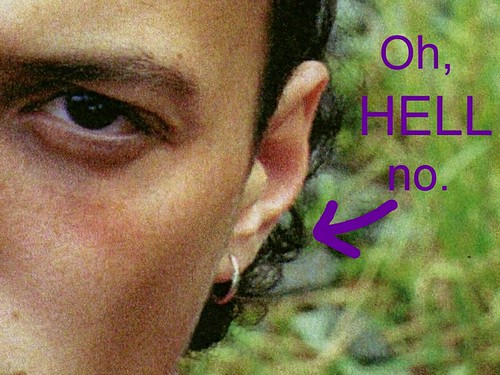 OH, DEAR GOD IS THAT A MULLET? ARE MULLETS BACK?

See? This is the stuff that should be worry us about the Urban Outfitters catalog. Cussing I have no problem with (here’s proof: Crap. Piss. Wiener. Hee.)

But if the children are our future, and they can’t be persuaded to put on trousers (or, hell, LEGGINGS. I will settle for leggings as pants at this point), and they keep running around in mismatched socks while throwing things into rivers and kissing mulleted boys and … 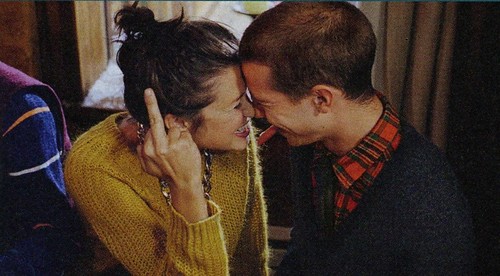 Sigh. Whatever. I guess the future is screwed. I need a drink.

Nothing to Do With Travel, WTF, WTF Wednesday