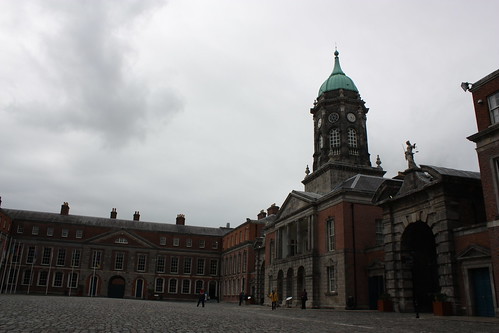 Are you tired of hearing about Ireland? Truth be told, I thought I’d be done by now. But damn, a lot happened in Ireland. (I realize I could be referring to both our trip, and to the country’s rich history. Since both would be accurate statements, I am leaving that sentence intentionally vague).  Every time I think I’m ready to move on to Milwaukee or Portsmouth, I remember some detail I’ve forgotten to write about.

That seems like a pretty big omission, wouldn’t you say? You’d think I’d have noticed something like that. It’s like that time in high school that I pulled on jeans from the day before, and went to TWO DIFFERENT class periods before realizing that there was a dirty pair of underwear stuck in my pant leg.

And so this week, while I might take a few long blog-digressions to tell you about trips that happened more recently (and the many, many cupcake shops I visited), I am going to tell you about Dublin. It’s a lovely city – haunted by water, from the river that runs through and beneath it, and the rain that is either falling or threatening to.

It reminded me a little bit of home. But when I walk through my own neighborhood, I don’t hear nearly so many calls of “Hello, gorgeous!” (which I pray is Irish for “Hello, gorgeous!” and not something awful.) Clearly, the boys in Ireland are very sweet and flirty and completely nearsighted. Which was fine by me.

I’d highly recommend Dublin – and Ireland in general – for anyone whose self-esteem needs a bit of a pick-me-up, and for anyone who wishes to appreciate a soggy and beautiful place.

And while you are there, I’d suggest visiting Dublin castle. It’s a rather important fixture in Irish history. Yes, a lot happened in Ireland, but a lot happened specifically at the castle. 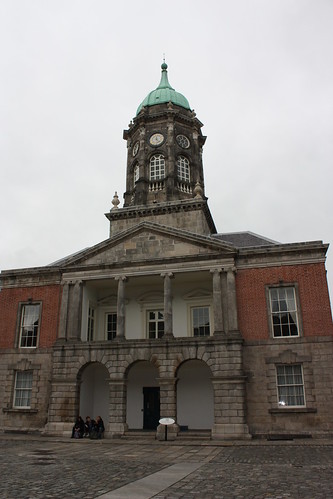 Clock tower within the castle walls (which was handy, as my watch had broke).

Before I tell you about the castle, let me give you a brief history lesson (no, really. This time it will be brief). Many hundreds of years ago, Celtic tribes inhabited Ireland. The Romans had named the land Hibernia, meaning “land of endless winter”. This is why, as one tour guide told us, the Romans never tried to invade Ireland.

The Vikings, though, weren’t quite so bothered by the weather (one can only assume those horned hats were insulated), so around about the 9th century, they invaded Ireland. The resulting culture was a mix of Norse and Gaelic, and the people were conveniently referred to as Norse-Gaels.

Modern-day Dublin was built on the same old footprint of the Celtic village that once stood there. Presumably this was so they could avoid rezoning the area, which I suspect would have involved a lot of paperwork and fighting with battle axes (you know how pesky those Norse-Gael bureaucrats can be).

Then, in 1169, the Norman Invasion began (that was when England took control of Ireland, which became a rather long saga involving both countries. Hell, some of the roots of the Troubles can be traced back to the Norman Invasion).

The Normans seemed a wee bit paranoid that someone might come along and try to take what they had rightfully stolen, so they built a large wall around the city center. They also built a castle in one corner of the town, where a Viking fort had once stood. You can make out the wall and the castle in the upper left of this reproduction of an old city map (I think it dated back to the 1200s, but to be honest, I’ve entirely forgotten). 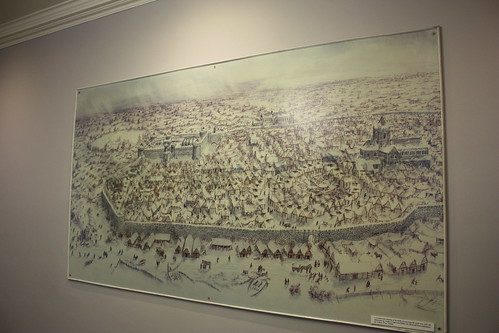 Along two sides of the city walls, where the castle was nestled, ran the river. This served as a moat for those two sides. Now, here’s possibly my favorite tidbit about the castle, and it’s something that I consider to be a bit of a marvel of civic engineering: arches were cut in the city walls on either side of the castle, and trenches were dug along the two “dry” sides of the castle that resided within the city’s walls. The river flowed through the arches and into the trenches, making a moat around the castle. I’ve diagrammed it here, on paper (which I’m sure will infuriate my husband, who bought me a very expensive Wacom illustrator’s tablet that I never use). 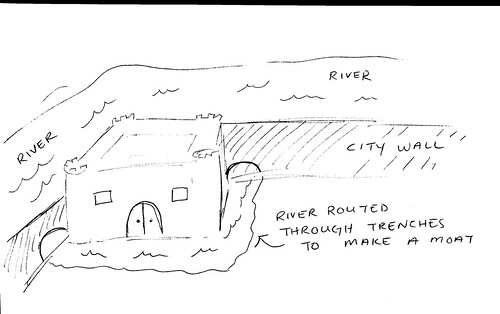 I can actually hear him slamming his palm against his face.

The water accumulated at the back of the moat, inside the town, making a black pool. This is where the town of Dublin gets its name (from the Irish “dubh” and “linn” meaning “black pool”). Today, the pool is gone (the river now runs under the city. Which is rather confusing for me, but more on that later), and the castle’s gardens now sit on the spot. Stone eels form a Celtic knot pattern that you can see from above. 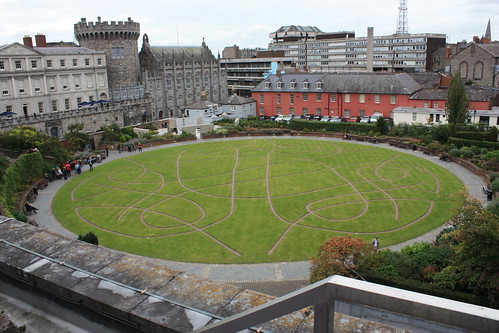 You can walk along the eels, if you are so inclined, or run along them making “whoosh-ing” sounds until your wife insists that you stop, at which point you walk off, pouting. 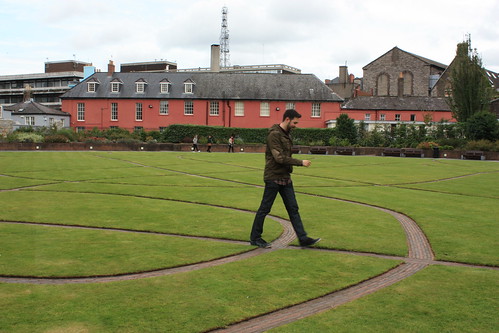 I was worried he was running where he wasn’t supposed to, but apparently it’s totally fine. The eels are fair game.

The entrance to the castle was originally marked with spikes, on which the heads of slain enemies were placed. When the castle was renovated a while back, they found numerous skulls near one of the main entrances. Now it’s a wee bit more subdued and less ghastly. 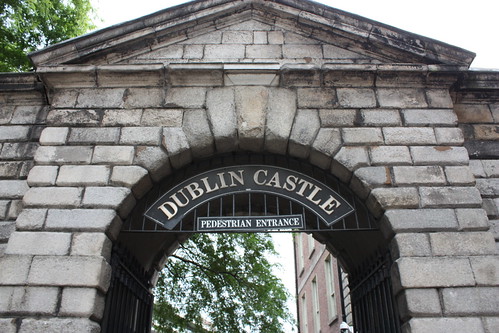 In the late 1600s, a fire tore through the castle. It spread quickly across the wooden elements of it, and in order to make sure it did not reach the records turret or the gunpowder turret they BLEW UP THE BURNING PART OF THE CASTLE.

Isn’t that just delightful? Even back in the day, I tell you, the Irish knew how to party. Anywho, the castle was rebuilt in brick, but one of the old turrets still remains: 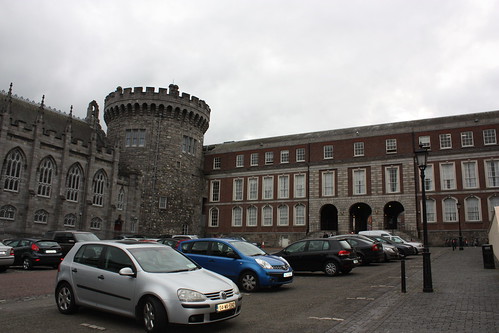 You can tour the outside of the castle and the gardens as much as you like, but the only way to see the inside is via guided tour (which takes you through the State Apartments and the Medieval Undercroft), which run every hour or so. It takes you through several rooms of the castle (“The State Apartments”), including the drawing room, where the Irish president still entertains guests to this day. 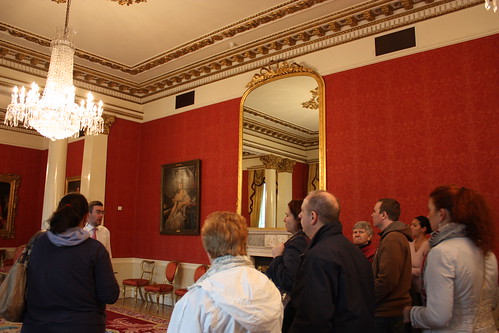 Our guide explained that a “drawing room” was originally known as a “withdrawing room” – it was where ladies would “withdraw” to after dinner, while the men would continue to sit around the table having discussions about matters (like politics and science) that were considered inappropriate for women to partake in. After they were done with their discussion, the men would later join the women in the withdrawing room, which eventually became known as just “the drawing room”. 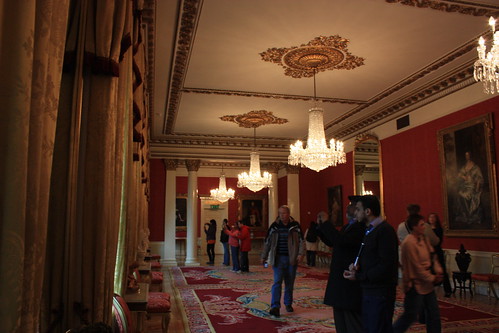 Pretty nifty, huh? Except for the whole rampant sexism. 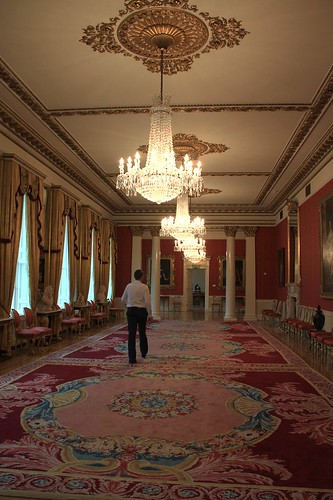 We walked through the portrait room – the walls are lined with portraits of the former viceroys to Ireland. Prior to Irish independence, the viceroys were appointed by the British Parliament to oversee things in Ireland. Some of them loved their jobs, and were in turn beloved by the Irish. Others, not so much. 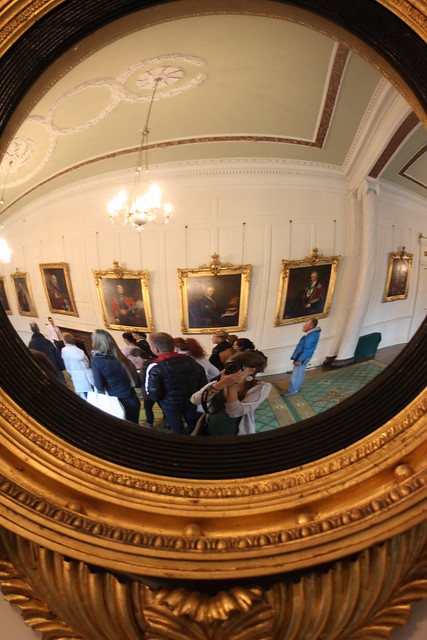 Self-portrait, taken in the portrait room. Aren’t I moderately clever?

The tour of Dublin castle fit perfectly with much of the Irish history that we had already picked up. I had learned about the Irish Civil War while in Belfast, but Dublin was where it began. Remember the story I told you of James Connolly? He was one of the ill-fated leaders of the Easter Rising – all of whom were subsequently captured and executed. James Connolly was shot during the revolution, and his wounds became gangrenous. He was so sick that he was tried from his hospital bed, and had to be tied to a chair for his execution because he was too weak to sit up, much less stand.

There is now a plaque on the wall of one of the rooms of Dublin castle, where Connolly lay dying from his wounds, prior to trial (it is unofficially known as the Connolly Room. Portraits of Connolly and his fellow Easter Rising leaders now line the walls). 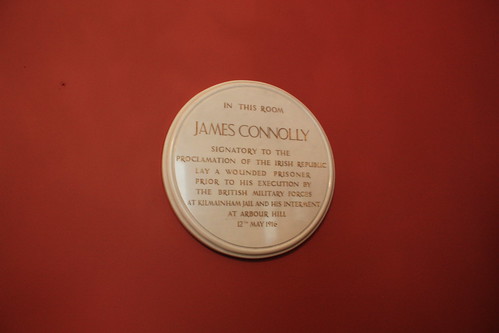 And let us not forget the throne room, which is rather modest (understandable considering that Ireland is no longer under British rule). Prior to independence, this room was used by visiting British monarchs. It now serves little purpose, except as a reflection on how times have changed. 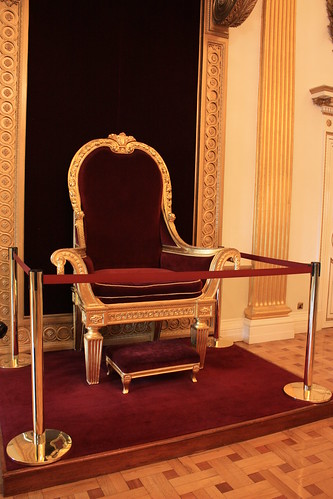 The throne room sits adjacent to St. Patrick’s Hall, where Irish Presidents are now inaugurated. The hall is far larger and grandiose when compared to the throne room – perhaps a little dig at the monarchy. It is here that formal state dinners take place. 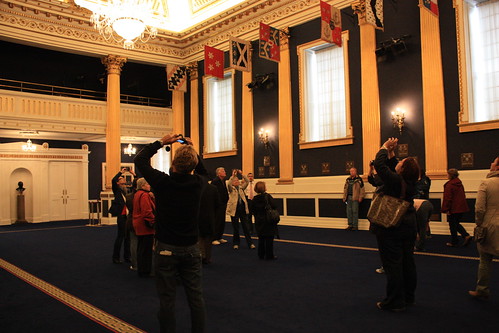 Hard to tell in this light, but the carpet was a vivid royal blue.

Note that everyone in that photo is taking pictures of the ceiling. They don’t just happen to all share the same odd hobby (“Let’s photograph ceilings!”) – there were some rather magnificent paintings up there. 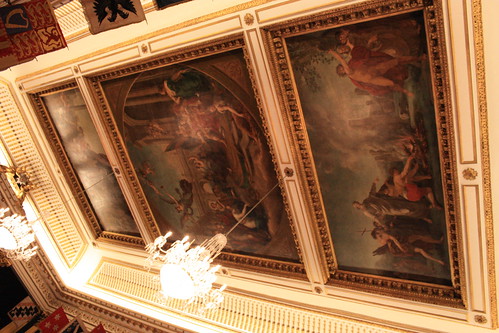 This is their ceiling. Whatever. NBD.

It’s kind of amazing that they just let tourists run around, taking photos and smacking gum and farting, in such a lovely and dignified place. Obviously, I am grateful that they did, but my favorite part of Dublin Castle was not any of the long, gilded rooms, or unused thrones, or portraits of stodgy-looking British viceroys. Instead, it was a dark and damp space at the bottom of one of the turrets.

Also know as “The Medieval Undercroft.” (Which, admittedly, sounds a bit naughty.) 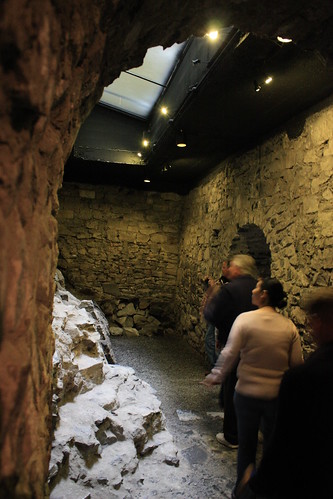 There were two fascinating parts about this section of the castle. One was a pile of old rocks. The other was a bit of stagnant water.

I kid you not.

The rocks were uncovered during repairs made to the castle in the 1980s. They are believed to be part of the original Viking fort that sat on the grounds before the castle was built. They date back to the year 900 or so. 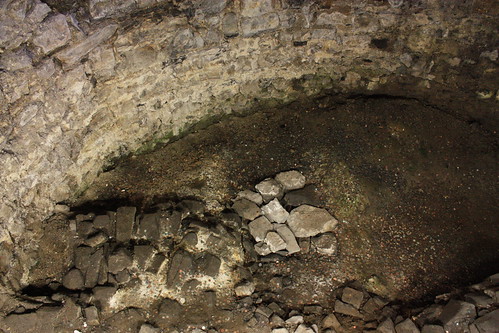 And let’s not forget the stagnant water.

As I so ineptly diagrammed earlier, after the Norman invasion, there were arches carved in the city’s exterior wall, so that water could flow in from the river and make a moat around the castle. Around the time of the plague, these arches were sealed up, as it was believed that the disease was carried through water (this obviously wasn’t the case, and the plague still permeated the city’s walls).

At the bottom of the old castle turret, you can see where the arches were sealed up. 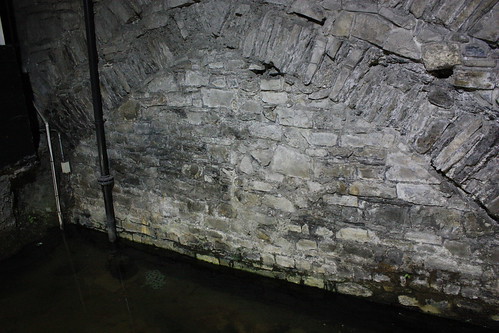 But it gets even cooler.

The river, having been directed around the castle for so long, didn’t like being shut out. And so, to this day, the area underneath the turret leaks water in – remnants of the moat that was once there. 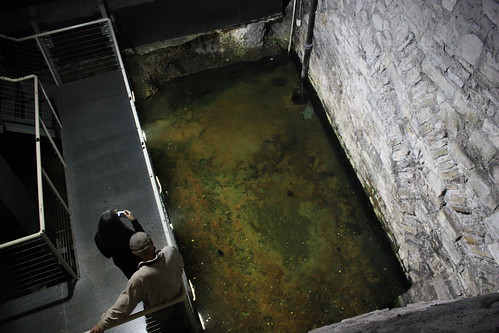 When the water level gets too high, a pump removes some of it, so it won’t do any damage to the castle.

I loved these little two little artifacts of centuries ago, residing just below the surface of the city. It’s a testament to how rich Dublin’s past is – history is literally everywhere – in the gilded halls of the castle to the puddles of water below it.

The Essentials on Dublin Castle: