If you are just popping into my blog, welcome! I am currently in the midst of trying to recap Irish history from, oh, about the 1600s until modern day. It is making my head spin (seriously. I feel like the kid from The Exorcist, but with worse hair). I understand if you’d like to come back next week, when I talk Milwaukee beers and the Green Bay Packers. If you are inclined to stay (thanks, by the way) I suggest you read my posts about Irish history and how the country came to be and how the Troubles first began. 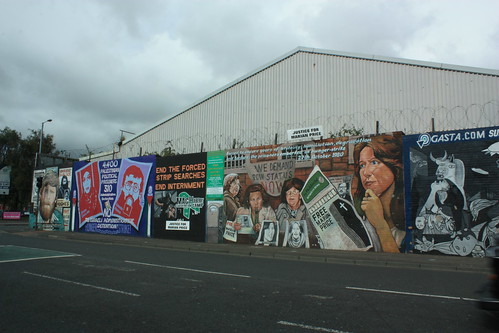 Can I tell you something about myself? I need to admit it, because I think it’s significant, especially as it pertains to the topic of Irish history.

When I was a teenager, in the mid to late 90s, I was petrified of the IRA.

Looking back, this fear seems kind of irrational. After all – Ireland was a long way off from Seattle. (Incidentally, I also had a huge fear of cholera. Just in general.)

Plus, it’s kind of an odd perspective to have as an American. The IRA had a lot of support here in the states, up until just a few years ago.

I suspect my fear had something to do with seeing The Crying Game twice at the tender age of 12, and being scared out of my wits by Miranda Richardson’s character. (For those of you wondering why I saw it as a middle schooler: my mom was writing a term paper on it, and she refused to leave me home alone because she thought that was more dangerous than exposing me to a violent psychological thriller TWICE. Sigh. She meant well.)

So the IRA scared the hell out of me.

Having disclosed that, it’s time to continue talking about the Troubles. As usual, please forgive my biases, errors, oversights, and sheer cluelessness, and feel free to correct me in the comments. Here we go, once more …

From the late seventies up until the 1990s, there was a great deal of fighting back and forth between the paramilitary groups in Northern Ireland. The main groups were the IRA on one side, and the Ulster Freedom Fighters (UFF) on the other. Bombs were a common method of attack, as were shootings. Neighborhoods segregated themselves by religion (there were Catholic areas and Protestant ones) so it was easy to target victims.

Violent encounters were escalating, and would shape the political and cultural landscape of the country for the next few decades. During this time, the internal political structure of Northern Ireland also went through a lot of upheaval.

As I mentioned yesterday, after Bloody Sunday, the Irish Parliament was first suspended, then abolished. Rule of Northern Ireland was now the responsibility of Britain, but that arrangement was temporary (I think that the British Parliament realized that Northern Ireland would always want its own devolved government, and trying to legislate from Westminster would not work).

In 1973, the Northern Irish Assembly was formed as a means of returning rule over to Northern Ireland, with the intent of having power more evenly divided among Unionists and Nationalists. (This would be practically impossible, though, without serious intervention; Unionists were the vast majority in Northern Ireland.)

Certain international issues would be handled by Westminster, but the Irish Assembly would be in charge of local issues. The eventual arrangement they had reminds me a little bit of the division between state and federal jurisdiction here in the U.S.

The Assembly lasted about a year before collapsing. Hard-liners on both sides made having any sort of local governing body impossible. Britain once again took over the reins in 1974. Northern Ireland still had MPs (a.k.a., representatives), but they would meet as part of the British Parliament at Westminster. 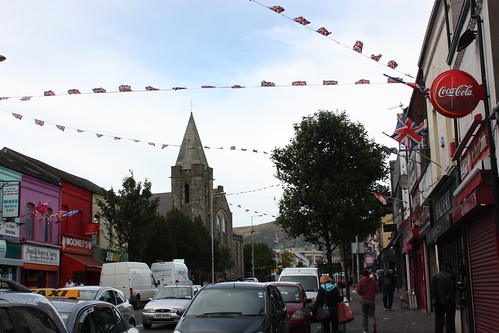 A Protestant neighborhood in Belfast. Notice the British flags.

Around the same time (during the 70s and early 80s), a number of a large number of individuals from the IRA and other Republican/Nationalist organizations were imprisoned (as were a number of Loyalists/Unionists, but what I’m about to discuss doesn’t really pertain to them). They were in jail for a myriad of offenses ranging from minor to serious – everything from weapons possession to murder. Up until 1976, they enjoyed Special Category status; they were considered prisoners of war. Consequently, they had privileges such as wearing their own clothing instead of prison uniforms, and being able to socialize with other prisoners.

When that status was withdrawn by the British government, the prisoners launched a variety of protests (there is some fascinating historical BBC video on the topic, if you have some spare time).

The first was the Blanket Protest, during which prisoners had refused to wear the uniforms they issued, or went naked, wearing only the blankets. This is my favorite of the protests because no one died. And because I love blankets.

This was followed by the Dirty Protest, during which prisoners refused to wash, and smeared feces on the walls of their cells and their furniture. (My feelings about this protest can best be expressed by me washing my hands furiously, a la Lady Mac Beth.)

Lastly, there was the 1981 Hunger Strike. This last protest was the most significant and the most tragic.

Britain’s Prime Minister, Margaret Thatcher, refused to give in to the prisoners’ demands (“Crime is crime is crime; it is not political,” she was famously quoted as saying.) Without her knowledge, several government officials were trying to work out some sort of compromise with the strikers, but it was fruitless. It was not until 10 prisoners had died of starvation, and the families of the surviving prisoners intervened, that the protest finally came to an end. Though they were never recognized as political prisoners of war, eventually all of the strikers’ demands were met through a series of reforms.

The victory came at a price for Thatcher, though she did not yet realize it. Shortly after the strike began, one of the protesters, Bobby Sands, had been elected to British Parliament. Consequently, his plight and his death (he was the first of the ten hunger strikers to succumb to starvation) received worldwide attention. 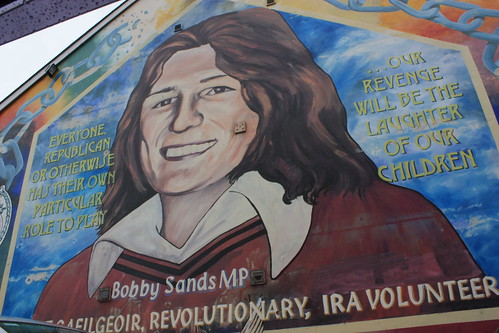 Bobby Sands and his compatriots were now considered martyrs. Recruitment for the IRA and their political branch, Sinn Féin, skyrocketed.

In many parts of Northern Ireland, Thatcher was loathed. Sinn Féin member Danny Morrison called her “the biggest bastard we have ever known.”

On the other side of the issue, the Ulster Freedom Fighters were also recruiting. Like the Nationalists, they too had a political branch – the Ulster Defense Association.

In 1982, Northern Ireland had another go at having a local Irish Assembly. This time, it lasted for a few years.

In 1984, an assassination attempt was made on Margaret Thatcher. The IRA took responsibility, and their statement to the Prime Minister was haunting:

She narrowly escaped, and the next day gave a speech with such composure and calm that it earned her worldwide admiration and support. 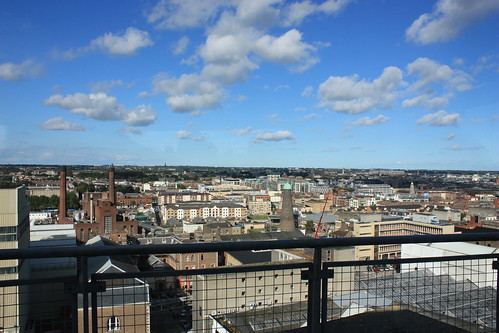 The gesture was largely symbolic; the Irish Assembly was still in place, and the Republic could make no laws. It was simply an attempt to bring balance to the Northern Irish government, and give the minority Nationalists/Republicans more of a presence.

It went over well with them – 65% of Catholics in Northern Ireland supported the agreement. The Unionists, however, were incensed. They had been elected to office democratically, and felt that they were now being usurped by the losing party. 75% of the Protestant population agreed with them.

I feel like it would be the equivalent of say, the federal government forcing a blue state like Washington to have a GOP advisory counsel present in the legislature, in the name of bipartisanship (also, the GOP advisory council would be, I don’t know, from Northern Canada or something). Needless to say, it caused quite a bit of uproar. Several members of Thatcher’s cabinet resigned over the issue.

In 1986, the Irish Assembly dissolved in protest over the Agreement. Once again, Northern Ireland would be ruled by Westminster. One good thing did happen as a result of the Agreement, though: the Republic of Ireland and Britain were making now talking; the relationship between the two nations was improving, and the foundation was being laid for what would become the Good Friday Agreement.

At the end of 1990, Margaret Thatcher resigned.

The Troubles continued. One attack would spur a retaliation attack, in a vicious cycle. Forgive my bluntness, but during this time the provisional IRA and the UFF killed a hell of a lot of people. There was a temporary ceasefire in 1994 which didn’t quite take, but it did allow for Sinn Féin representatives to meet with British officials (prior to that, Britain had refused unless they agreed to put down their weapons).  In 1996, the IRA ended the ceasefire with an explosion in London’s Docklands.

The Good Friday Agreement was signed in 1998 as part of the Northern Irish Peace Process. It is not terribly long, but it is rather involved. Parts of the agreement that pertained to Northern Ireland needed to be signed by the parties there (and indeed, it was. Only one Unionist group did not sign), and parts of it needed to be signed by officials in Britain and Ireland (again, it was). Here is some of what the Agreement stated:

You’d think that by now everything would be fine, right?

It wasn’t. Though there was less violence now, it still continued. The failure of paramilitary groups to disarm led meant that the Northern Irish Assembly was once again suspended. Direct rule from U.K. was reinstated around the start of the new millennium. Bombings continued throughout Northern Ireland, and a series of attacks took place in London as well.

Some advances were made, though. The largely-Protestant RUC police force was now replaced with one that was half Catholic and half Protestant.

Interestingly, there is an argument to be made that the tragedies of September 11th helped to advance the peace process in Northern Ireland. One reason given was that the IRA, which had enjoyed support in the states, lost it once we had experienced terrorism on our own shores. Another was that people suddenly became acutely aware of the futility of all the fighting and put down their weapons (though this seems to be a rather idealistic viewpoint).

In 2005, the IRA put down their weapons. As did the Loyalist Volunteer force (a Unionist paramilitary group).

In 2007, the Irish Assembly was reinstated.

Now? There is a fragile peace, occasionally disrupted by riots and bombings. A militant group calling itself the Real IRA has emerged (though their agenda seems more Marxist than anything else). 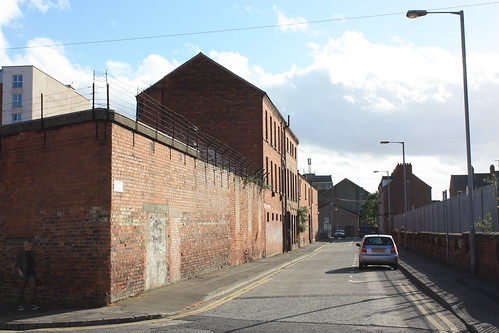 Some buildings still have barbed wire, and look like military compounds.

But you know what? We met people of different religions and political views in Ireland, and we all had a fantastic time together. And now that I’ve covered all the history and ugliness, I can’t wait to tell you about the good stuff. 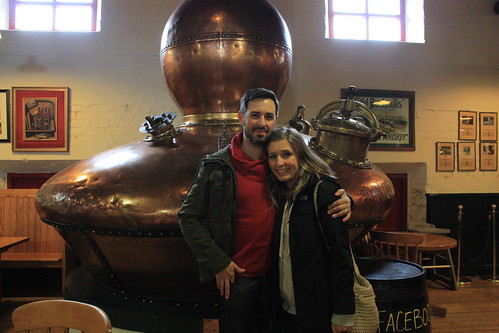 But first I need a wee break. Over the past two days I’ve done more reading, researching, and writing than I probably ever did in college. Screw whiskey. I’ve gone and earned myself a sticky toffee pudding.

And also a whiskey.