It’s November 1st, and like any forward-thinking lunatic, I’m contemplating next year’s Halloween costumes. I only have 364 days to go.

We take Halloween rather seriously in our house. My mother is to blame. I don’t quite know when she learned about the tradition of dressing up for the holiday (I seriously doubt it had been exported to Europe back in the late 70s, when my brother was wee, so it must have been after she moved to the states and I was born), but I can imagine her hearing the word “costume” and getting that charmingly crazy look on her face that I know too well.

And so, on one October that I was too small to remember, a brilliant madness began, and continued throughout my childhood. My mother would make elaborate costumes, and do my hair, and wonderful things like this would happen: 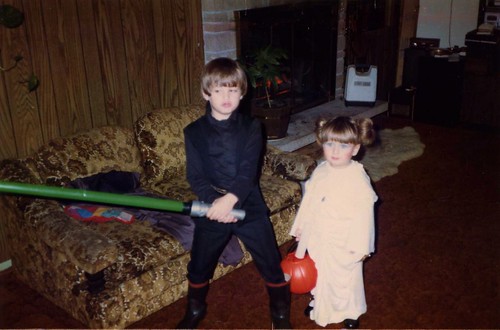 As I got older, my enthusiasm for Halloween started to wane. I briefly became one of those gals who wore tight dresses and animal ears and declared myself a cat or a bat or something else equally unimaginative. I feel shame admitting it now, though I suspect that it’s a phase we all go through: we have to tell ourselves that we are above dressing up and pretending. That we’ve somehow outgrown eating candy we pilfered from strangers.

For a while, I lost the spirit of Halloween. Which for me, a gal with a long legacy of elaborate costumes and candy-eating, was somehow far sadder than if I had lost the Christmas spirit. (I don’t know why. Perhaps it’s because candy canes never have, and never will, trump a Reese’s peanut butter cup).

Then I met Rand. And things started to change.

This was a boy who was willing to sweetly request I make him a Fred Flintstone costume, and then bravely walk to work while wearing it.

I’d spent years pretending that I was too cool for Halloween, when, really, I should have been asking: Am I cool enough for Halloween?

Was I brave enough to, as a full-grown adult, wear a ridiculous costume out in public? Did I have the strength of character to be able to wander down the street, knowing that people would stare and point and occasionally ask to take our photo? Could I handle being ugly, or scary, or strange?

Turns out that I most certainly could. In Rand’s company, I could do all of those things. And a tradition started of the two of us dressing up on October 31st.

There was one catch, though. Rand loves Halloween, and he loves costumes, but he was and is staunchly opposed to wearing makeup, masks, and wigs (I, thankfully, am not). So whatever costume I make for him must be simply that – a costume. These parameters have made things slightly more challenging, but no less fun.

Two years ago I made us Star Trek uniforms (from the original series). Rand was supposed to be Scotty, but he ended up as a red-shirted ensign (because I ran out of gold ric-rac). Fear not: he made it through the night. 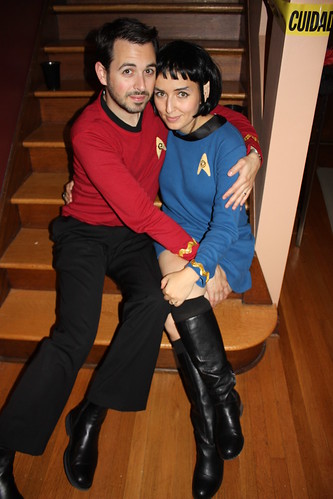 Last year, he finally went as Steve Zissou from Life Aquatic, a costume he’d been contemplating for years. Indeed, that was why he grew out a beard in the first place, on an October day many years ago. He was considering a costume; the beard stuck.

I was Margot Tenenbaum, from The Royal Tenenbaums. 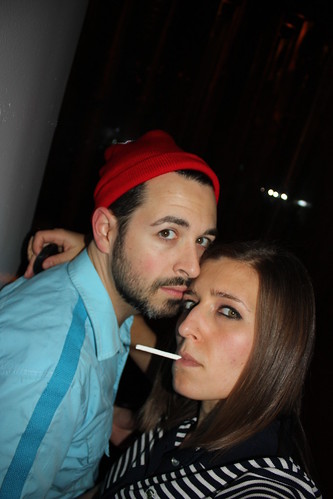 And while we hadn’t planned on paying homage to Wes Anderson on two consecutive Halloweens, after we went to Moonrise Kingdom, and saw that the main character, Sam, looked remarkably like Rand did as a little boy, we couldn’t resist. Heck, Sam even had a little brown-haired girlfriend.

Since I am unemployed and endowed with plenty of free time, I started working on Rand’s costume. My goal this year was not to dye any clothing (since I’ve stained my hands blue for two consecutive Halloweens doing just that).

I’m happy to say I succeeded. I found a shirt and shorts at the thrift store that were miraculously the same shade of olive green, and set about adding trim and merit badges to them for Rand’s costume. 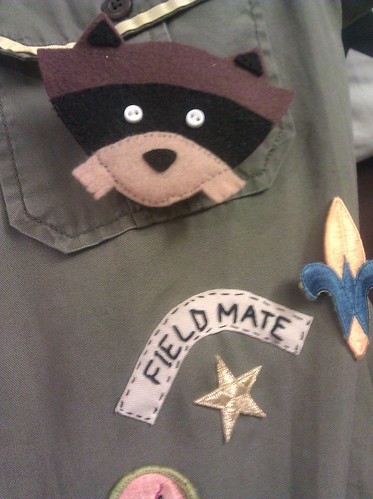 I remained faithful to the film for some of the badges … 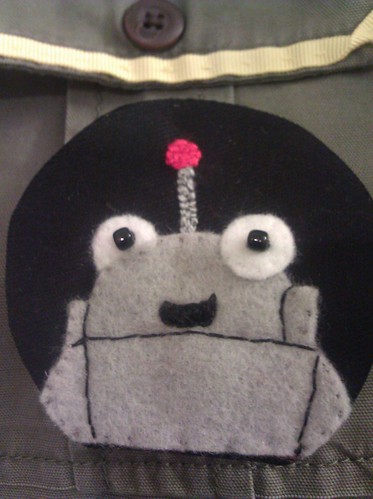 And took some artistic liberty with others. (This is Roger Mozbot, the mascot for Rand’s company.)

I bought him a raccoon tail hat, and some knee-high socks, and a canteen …

Oh yeah, and also? RAND SHAVED OFF HIS BEARD FOR THE COSTUME. 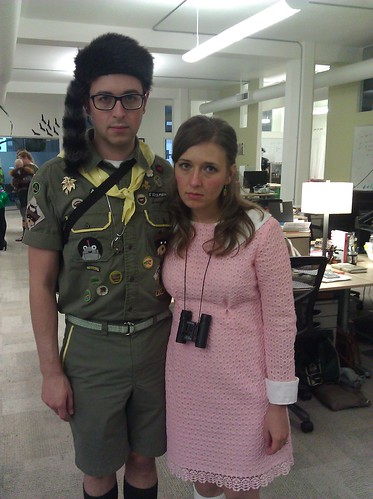 Here we are in character (i.e., overcome with ennui) as Sam and Suzy.

For only the second time in seven years, Rand is sans-beard. So now it’s basically like I’m making out with a stranger.

Which is just a weensy bit spooky. But I’m sure I’ll get over it.

Halloween, Life at Home, Moonrise Kingdom, Nothing to Do With Travel, Wes Anderson