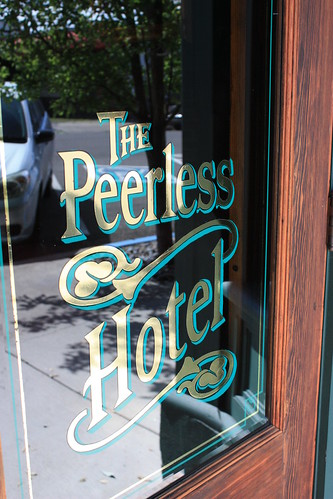 Every time that Rand and I stay in an old hotel, we have a similar exchange:

Me: This place is nice. Too bad it’s haunted.

Me: You’d like for me to think that, wouldn’t you?

Rand: Yes. Yes, I would. I would very much like for you to believe that this place isn’t haunted, because it isn’t.

Me: Whose side are you on, anyway?

Or something like that. The point is, I’m rather steadily convinced that every time we stay at an old, remodeled hotel, we’re going to be haunted right out of there, and Rand’s convinced we aren’t.

We’re like a couple at the beginning of a horror movie. Or, at least, I assume we’re like a couple in a horror movie. I actually can’t bring myself to watch any, so I wouldn’t know. But my understanding is that they all begin sort of peacefully and idyllically. There’s a couple, and one of them is a pure skeptic, and the other is more concerned about ghosts and the supernatural (because she is clearly the more intelligent of the two).

They enter an old, creepy house/hotel/ski lodge and … well, it usually goes downhill from there. But there are a few blissful minutes where everything is wonderful, and the couple is running around their spooky old lodgings and having the time of their lives, before walls start bleeding and someone’s head starts spinning around on their neck.

So when I say that the Peerless Hotel in Ashland, Oregon, is like something out of a horror movie, I’m referring to those first few wonderful minutes. Because the Peerless is lovely and idyllic and old and we had a wonderful time there. Even if it was kind of creepy, and even though we might have had four or five fights about whether or not it was haunted. 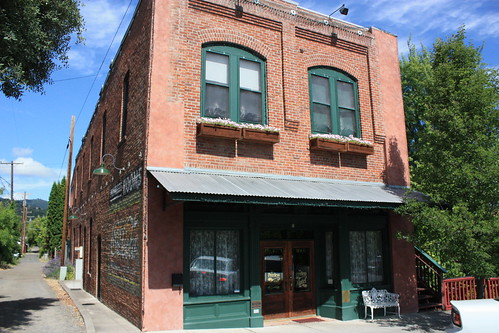 The history of the hotel is fairly innocuous. Back in the early 1900s, the railroad brought a lot of business through Ashland. The Peerless Boarding House was built so that workers on the Southern Pacific line would have an economical place to stay while they were in town. There were 14 rooms, and one shared bathroom (we will discuss the sheer terror of this momentarily). A few years later, the railroad line was rerouted to go through Klamath Falls instead, and the number of workers (and need for lodgings) in Ashland decreased dramatically. Over the better part of the next century, the Peerless felt into neglect and disrepair. When it was purchased by its current owner in the 90s, it had a few interior walls standing, and that was pretty much it.

The current owners re-configured and remodeled the 14 original rooms to include four guest rooms and two suites – the Peerless Hotel. Oh, and all the rooms now have their own bathroom. That’s a pretty nice upgrade from having to share with 13 other grizzled railroad workers. Dear god. Just imagine the cleanliness of that toilet. It could not have been good.

But here’s the thing I’ve found with old buildings: no matter how much you remodel them, they still hang on to a creepy aura. The lobby and the hallways of the Peerless were lovely and decorated in a Victorian-style fashion. But there was no way in hell I was going to get caught in either of them alone. And certainly not with a Ouija board. 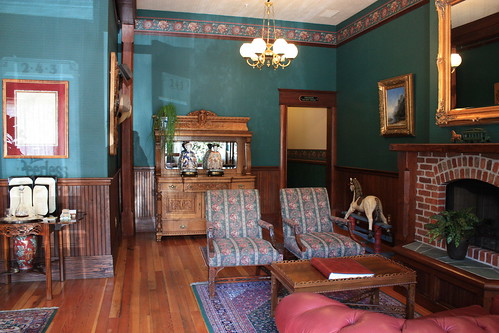 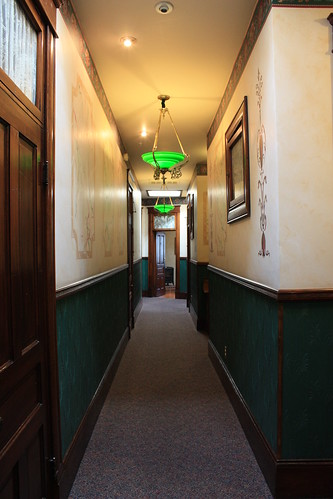 I told Rand that if we rounded a corner and saw twin little girls, a la The Shining, we were going home immediately.

Since it was our anniversary, and my husband is a wreckless and impulsive romantic, he booked us one of the suites. It was huge. Apparently three of the original rooms from the boarding house had been combined to create it. The crazy thing was that we could still see the footprints of the original rooms, including the boarded-up doorways.

Guess what? Boarded up doorways are kind of creepy. Especially when you are staring at one from your bed. 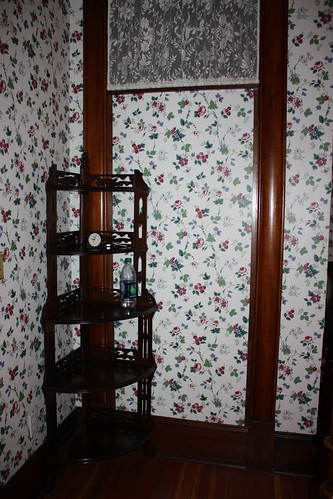 Or from the toilet. 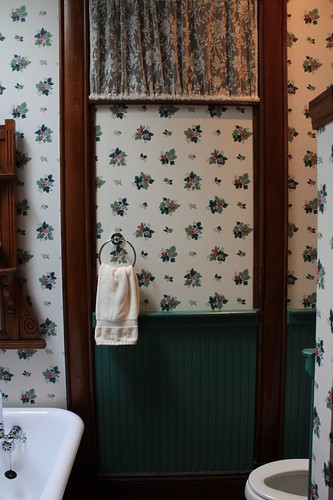 I kept expecting one of the not-doors to slowly start creaking open in the middle of the night and I’m-not-even-going-to-imagine-what was going to step through the threshold and devour us whole.

Our suite had a bedroom … 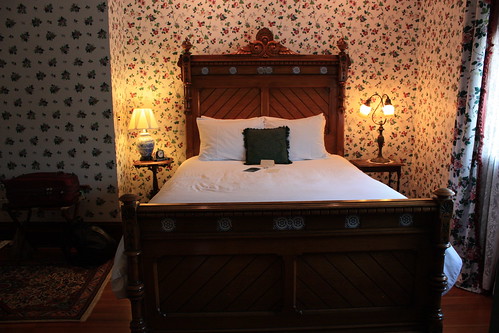 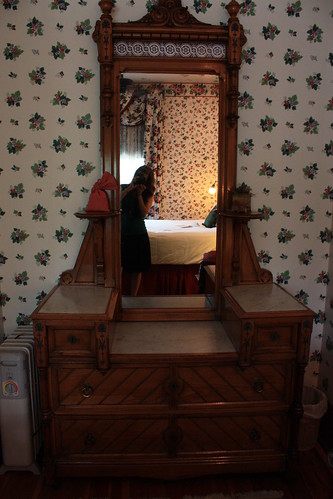 That’s me, obviously. I’m glad when I later looked at this photo I didn’t see the specter of some old guest of the hotel in the reflection, too. 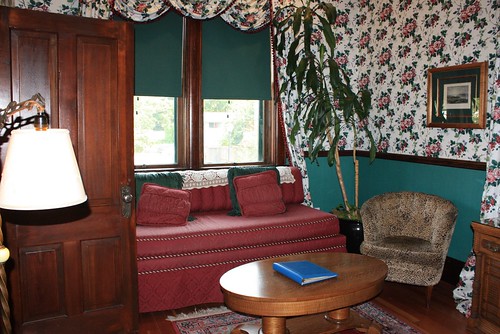 And a bathroom which rivaled my first apartment in size. It even had two – TWO – bathtubs. 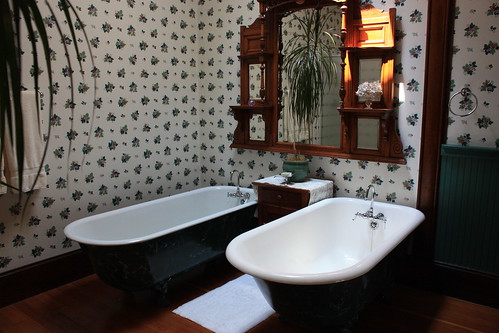 Despite my declaration of “OH HELL YES WE ARE USING THESE,” we did not.

Now, some of you may be looking at these photos and thinking, “Holy shit-crackers, that’s a lot of flowers.” And to those folks, I will say the following:

Our suite was covered in flowers. They were absolutely everywhere. It was like Mother’s Day had exploded inside of there. I found three different types of floral wallpaper in our room (two types in the bedroom alone). 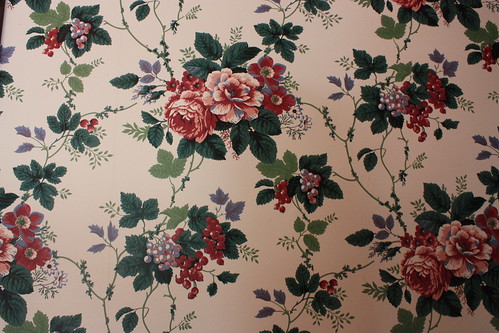 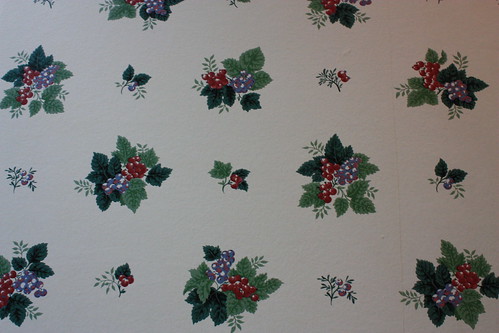 After a while, I started seeing flowers everywhere. On my clothes, on the surface of my skin. In my food. 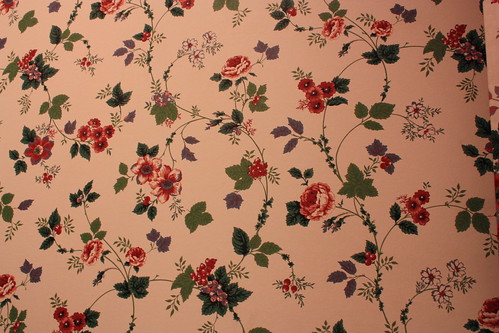 And let’s not forget the floral runner along the ceiling … 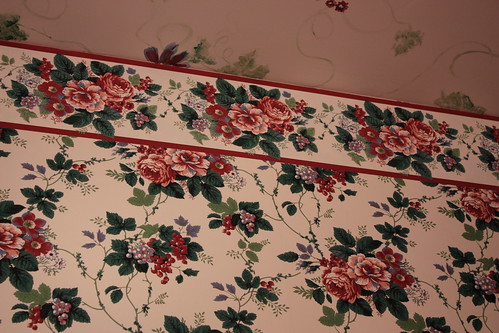 And some floral curtains, too. 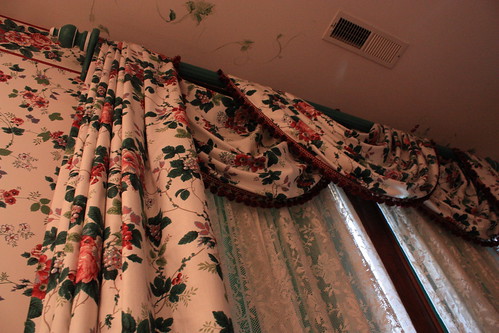 At some point, it was clear the flowers were taking over: 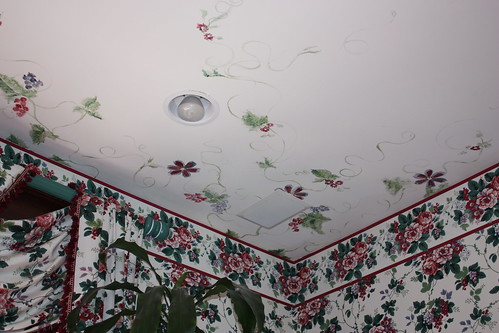 The had encroached onto the ceiling. Our souls would be next.

I found this more than a little alarming. Isn’t there an inevitable scene in most horror movies where the house starts taking over and wrapping itself around people? I’m guessing here – like I said, I only have a limited bit of knowledge on this subject, derived from the few scenes I watched, terrified, through my fingers at slumber parties. But I’m fairly sure I recall a part in Poltergeist II (I think that was the movie) where the kid’s braces start growing like mad and extending towards the electrical socket so that he’ll get electrocuted.

Okay, fine. I guess that’s more a case of dental appliances taking over, but still. You see my point. Flowers are terrifying.

And though I was expecting it each and every night, we never encountered any ghosts. The building never tried to kill us. We woke up each morning happy and refreshed, and treated to an amazing breakfast that was included with our bill.

Rand and I had eaten at the Peerless Restaurant before on previous trips down to Southern Oregon and really enjoyed it. I asked him if he thought that the breakfast included with our room would be on par with the dinners we’d had there. He said that he didn’t know how they could possibly be.

And he later admitted that he was wrong. 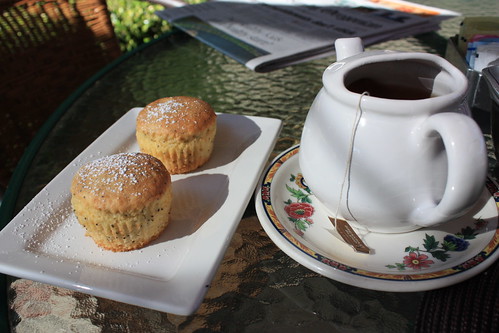 Lemon poppy seed muffins and a pot of tea. 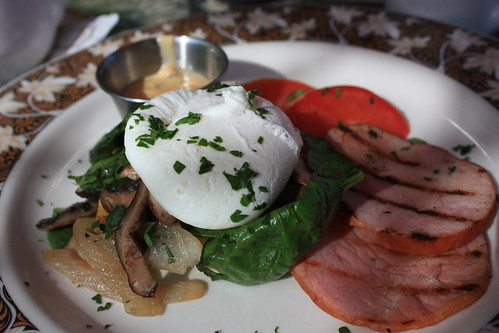 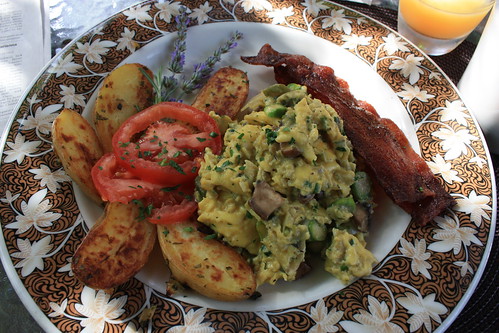 Every morning, we had an entree, juice, fruit, and some sort of baked good (guess what my favorite part was? DAMN STRAIGHT IT WAS THE BAKED GOODS). Peach french toast. Poached eggs over sauteed spinach. Lemon poppy seed waffles. Raspberry scones. Banana bread. Scrambled eggs with herbs and asparagus. I had post-surgery steroids coursing through me at the time, and I still found the portions to be generous. 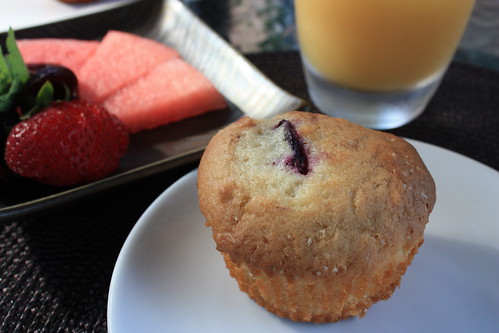 Honestly, the place could have been haunted and I wouldn’t have even minded that much, provided they kept bringing me those damn muffins.

After we got home, we received a call from one of the folks running the hotel, explaining that we had forgotten a small notebook in our room. They promptly mailed it back to us. The staff was, in every estimation, unbelievably friendly.

Our stay was idyllic. No ghosts. No creepy voices. No shadowy specters lurking in the corners. It was like something out of a horror movie. Or at least, the first ten minutes of a horror movie – when everything is happy and perfect. And a little bit spooky.