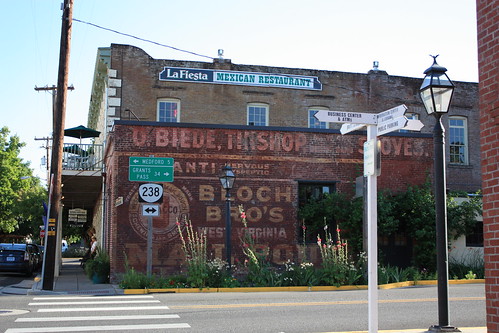 Have you ever fallen in love with a place that you’ve visited, but you can’t really figure out why? There’s just something inexplicable about it that makes you happy to be there?

And the more you try to describe your rationale for loving it, the crazier you sound? To the point where you might be clutching someone’s hand, trying to convince them of the magic of this place? And because you’re so damn passionate about it, you fail to realize that the person you’re talking to is somewhat scared for their life? And that you’re now frothing at the mouth and screaming about homemade fudge and free parking on weekends and you look positively mental? This doesn’t just happen to me, right? RIGHT?

Well, that’s kind of how I feel about Jacksonville, Oregon.

It’s a small, dusty little town not far from Ashland. It was founded during the Gold Rush, and despite falling on hard times in the early 1900s, it still managed to survive. Sometime in the 1960s, it was declared a National Historic Landmark.

That’s right: the whole town is a historic landmark. I kind of love that. I want to run around the town trying to enforce its historical landmarky-ness on people there.

“Don’t sit on that bench – President Taft once stuck a piece of gum on the underside!”

“Buy me a pound of homemade fudge, in the name of HISTORY!” (What? It might work.)

Rand and I make a point of stopping in Jacksonville every time we’re in Southern Oregon. And on each visit, I tried dissecting why I like the town so much. This trip was no exception. But I wasn’t quite successful. Even as I came up with reasons, they didn’t really capture Jacksonville’s awesomeness.

Here are some of them. But believe me when I say: they don’t do the town justice.

We saw this sign for nightcrawlers, and Rand, excitedly, asked me if we could get some.

“Um, you realize nightcrawlers are huge worms that are used for fishing, right?”

To this day, I still have no idea what he thought nightcrawlers were, but he was rather disappointed. It was adorable.

And this homemade sign is nothing short of fantastic: 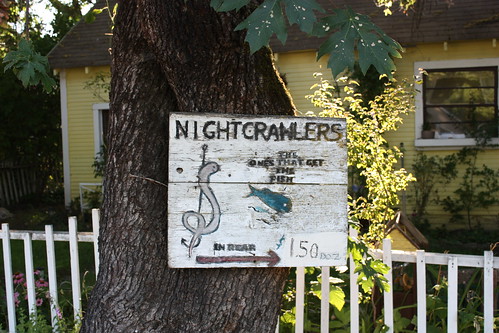 We encountered this empty phone booth downtown. For some reason, it reminds me of Woodsy the Owl, but is far more adorable (to be honest, Woodsy kind of scared me, with his self-righteousness and his giant, dead eyes). 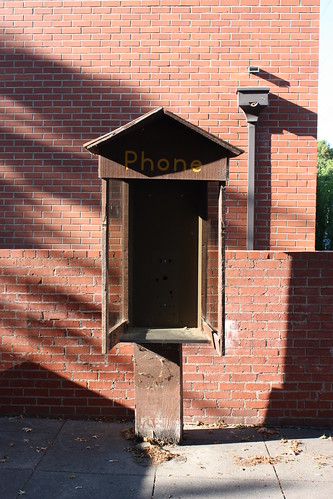 I found this piece of outdoor art particularly funny, because Jacksonville is chock-full of real deer. 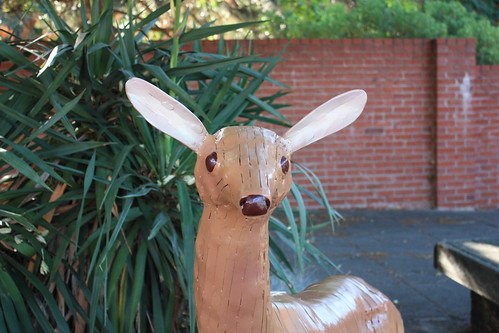 I can just imagine the city planning meeting that led to this being put up:

OF COURSE THEY DO. And frankly, doesn’t everyone?

Which really, are almost as cool as fake deer. 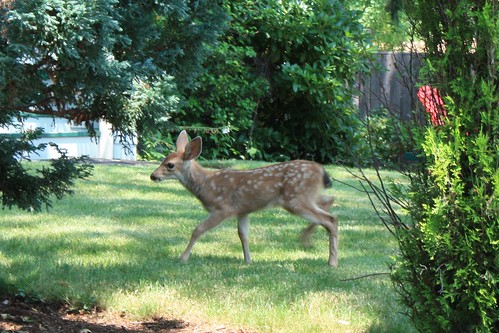 Please excuse me while I momentarily freak out over the cuteness: LOOK AT ITS ITTY BITTY LITTLE WHITE SPOTS.

(By now you are probably thinking, “Nightcrawlers, empty phone booths, and deer (both real and fake)? I should move here immediately. Hell, I should run for mayor.” And I would agree with you wholeheartedly, except that I WANT THAT JOB and I will run a smear campaign that will destroy you. You hear me? Now on to more reasons why Jacksonville is adorable.)

Over 100 buildings in Jacksonville are on the National Historic Register. It actually makes you feel kind of bad for the buildings that aren’t on it. I bet they get teased on the building playground for being new and lame. 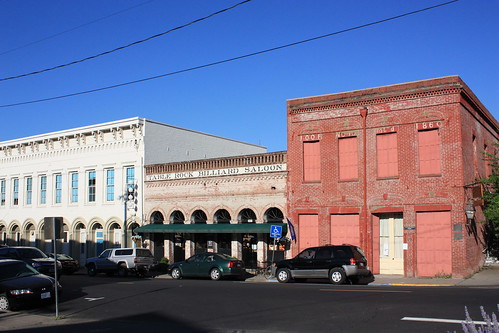 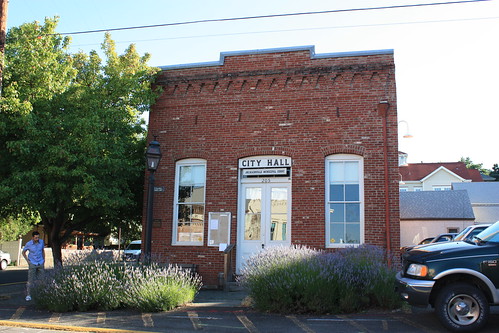 (Edit: apparently there is no such thing as a “building playground” … YET.)

Reason #6: The Touvelle House Bed and Breakfast. The rooms are nice, the food is excellent, and the whole place smells like cinnamon. 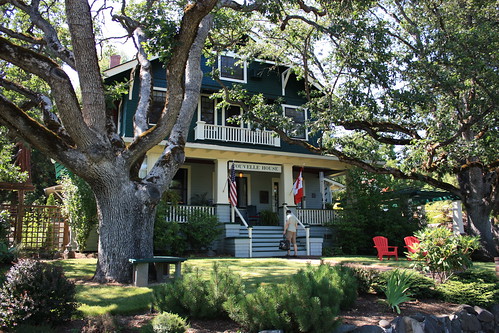 We usually head to MacLevin’s whenever we’re in town. They describe themselves as an “unconventional Jewish deli.” Yeah. A Jewish deli IN SOUTHERN OREGON. A place that I kind of thought was devoid of Jews (except for, you know, the one that I bring with me whenever I’m down there). The food is excellent (their chopped chicken livers in particular are quite tasty).

This time we decided to try some new restaurants, and were equally pleased with the results.

We went to the Mustard Seed Cafe for lunch. No pictures of that, because I scarfed down my meal too quickly. They brought us free homemade cookies along with our bill, and Rand had to tackle me before I offered to pick up everyone else’s check in a desperate plea to get more cookies (they were toffee chocolate chip, people. TOFFEE CHOCOLATE CHIP).

And then we went to the Deja Vu Bistro for dinner. We ate outside. It was downright splendid. 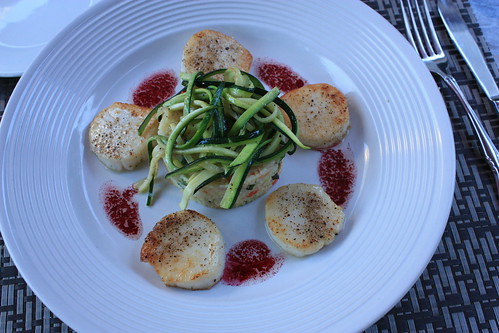 Rand got the duck breast … 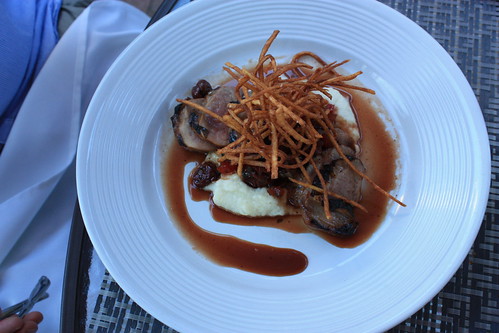 And we “split” this trio of desserts (by “split”, I mean that Rand let me eat 15/16th of it, and he snuck in a nibble of ice cream when I was looking the other way): 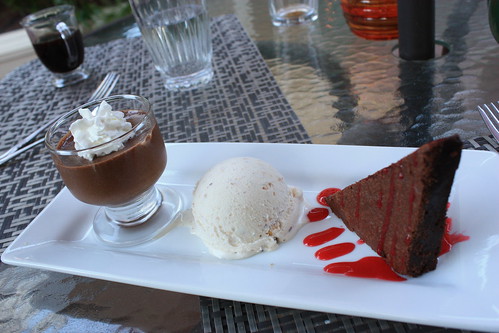 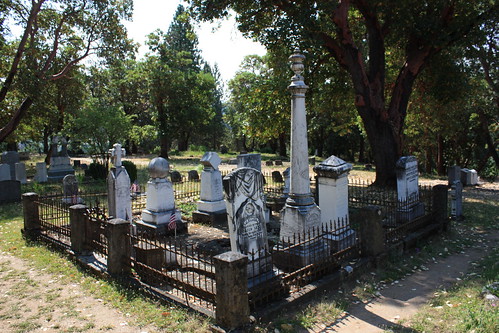 Zombie-free since … wait, what day is it?

Reason #9: The sky in summertime is so blue, it looks fake. 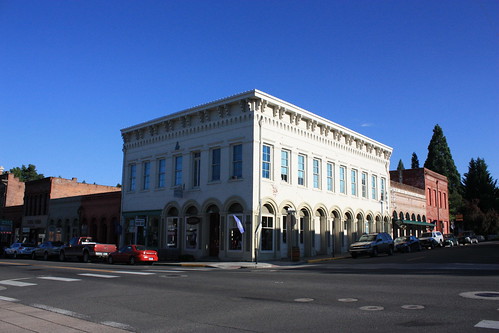 This is NOT ‘shopped. Oh, shut up. You CANNOT see the pixels, so don’t even start.

Reason #10: The Britt Festival, Jacksonville Mercantile, the shopping, all the friendly locals, that little shop that sells homemade fudge, the trolley tour that circles around town, the Jacksonville Garage Sale …

I know, I KNOW. That’s more than 10 reasons. But I’ve never been particularly good at math. Besides, if I sit here trying to enumerate everything that I like about Jacksonville, I will see my youth slip away from me even faster than it already is.

Let’s just say that I really love the place. And I can’t exactly tell you why. There’s just something about Jacksonville’s adorable weirdness that makes me smile. It seems to be a common theme in my life, actually: 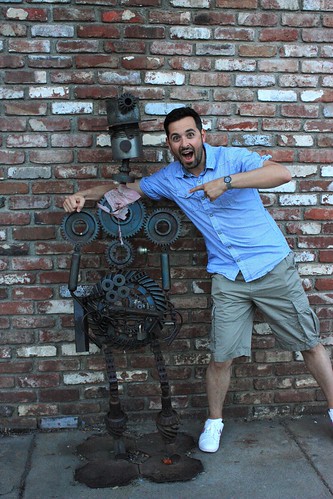 And I don’t really need to analyze it more than that.