While wandering around Palo Alto, I spotted this toy hanging from a rack at a grocery store: 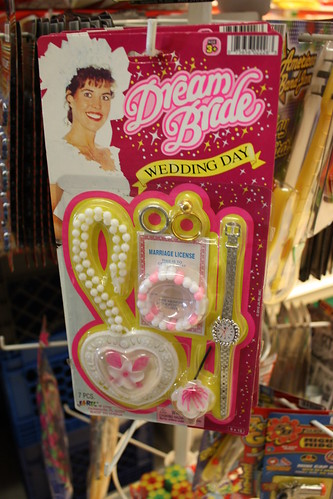 Do not stare directly into the bride’s eyes, or you will succumb to her dark power.

There are so many problems with this, I know not where to begin. I could point out the sheer sexism of this toy (“Why don’t we have Dream Groom playsets?!”), but that almost feels too obvious. Besides, I feel like to make that point, I would have to – at least, to some degree – also denounce marriage as an institution, which I can’t do because, lest you haven’t been paying attention, my husband friggin rules.

But for the record, this toy is absurdly, blatantly sexist. Let that be known. (Though I have no problem with playing dress-up. Sometimes I put on a cocktail dress and pretend I’m Jeff Goldblum’s date to a cake-tasting-party. As, I’m sure, the rest of you do, too.)

The other issue I have is the contents of this toy. Let’s take a closer peek, shall we? 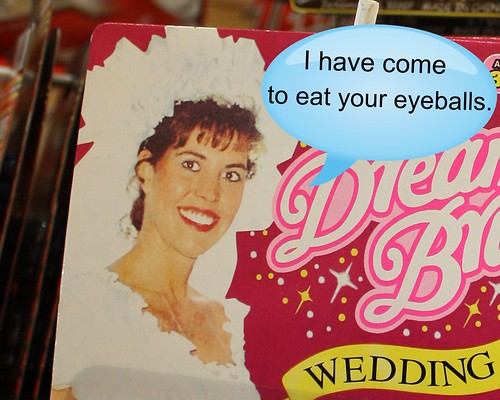 –
GAH. Okay, let’s not focus on that poor model, who I’m sure is much maligned by an over-zealous make-up artist, a bad printer, and whatever the precursor to Photoshop was. That’s not what I wanted to take a closer look at. Let’s try again: 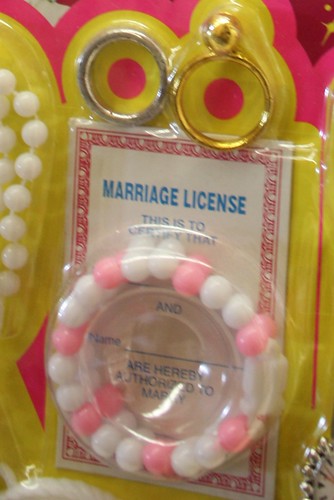 There is a toy marriage license.

I’m going to repeat that: THERE IS A TOY MARRIAGE LICENSE. Because, obviously, the most fun part of getting married is filling out the paperwork that goes along with the process. Absolutely. This was certainly the case for me. It was not that I got to wear a pretty dress and dance with my brand-new and totally awesome husband (taking breaks now and then to stuff my face with fancy cheeses). Oh, heavens no. It was the trip down to a windowless office in city hall, dimly lit from above with a buzzing neon light. There I handed over a check to a surly government employee, who, judging by her facial expression, I had cannibalized in a previous life (and she had a clear memory of it). She wordlessly shoved a packet of paper at me and Rand and wished us a swift dissolution to our marriage. Oh, heavenliest of days!

But here’s an even bigger WTF: I had this toy when I was a little girl.

I remember it distinctly. The graphic “art” on the packaging may have differed slightly (though, to be fair, the woman pictured could definitely have been there back in the mid-80s. Poofy bangs are timeless, so it’s difficult to say). But I remember tearing open the package and littering the floor of my playroom with it. Here is what I did with the contents therein:

Yeah. That’s how it went down, I’m pretty sure.

I don’t think I thought twice about that marriage license. I might have hastily scribbled Ken and Barbie’s names on it. Or perhaps my own name and Red Butler’s from Rainbow Brite (I kind of had a thing for him. Even though he was a ginger. And animated). And, as I noted above, the rest of that toy didn’t get much love from me as a child, either.

But seeing it there, in a small grocery store in Palo Alto? It was all I could do not to buy it again. To relive some of the joy of being a kid. Even if wasn’t a toy that I liked that much to begin with.