My favorite thing about travel is that you can often discover the most amazing meals in the most unexpected of places.

And I don’t mean the discovery of a candied peanut at the bottom of my bag in a hotel room in Bulgaria. (For the record, Rand wouldn’t let me eat the peanut, which I was able to trace back to an earlier trip London. I am still a bit peeved about that).

I’ve noshed on really good Bosnian food in Astoria, Oregon. Dined on excellent Caribbean cuisine north of 110th street in New York. I’ve even broken my rule about not eating sushi in a landlocked state, and had some truly decent sashimi in Colorado.

So I wasn’t all that surprised when my cousin told me that the best Thai restaurant in the U.S. is in a tiny strip mall in downtown Las Vegas, far from the casinos and bright lights of the strip. Life is full of culinary surprises.

The restaurant is called Lotus of Siam, and there is absolutely no way we’d have stumbled upon it, or thought to stop in, unless we’d been told specifically to go. We nearly drove right passed it, but thanks to GPS and some specious driving tactics, we made it there.

The restaurant is spacious, the lighting terrible, the air conditioning aggressive. We arrived a little after noon and had to wait for a short time before being seated.

The lunchtime buffet didn’t look too interesting, so we ordered three dishes off the menu instead. This was my favorite – it is called Nam-Prik-Ong, or the red chili dip. 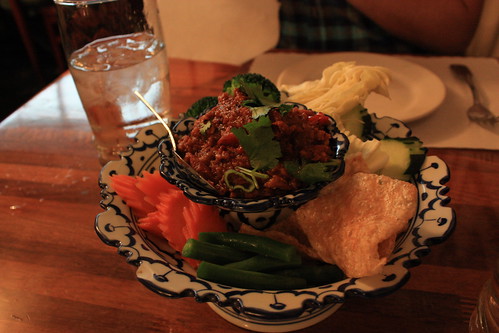 Since eating this dish, I’ve found myself craving it weekly. Consider yourself warned.

Don’t let the name mislead you: it isn’t inedibly spicy. The dip is a rich, tangy ragu of ground pork, tomatoes, and spices. It comes served with crisp vegetables and pork rinds.

The cabbage, cucumber, and the rinds were my favorites vehicles which which to deliver the dip to my mouth. And when we exhausted our supply of vegetables and other dippables? We just went in with our forks. I regret nothing. 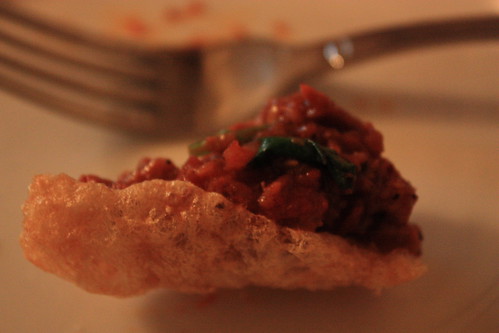 Just so we’re clear, I used a PORK RIND to deliver more PORK to my mouth. PORK PORK PORK.

The next dish to come out was beef curry with noodles. I can’t precisely find it on the menu, but if you ask, I’m sure the staff can decipher which entree you’re talking about. It has crispy and soft egg noodles, and the sauce is unctuous and rich without being too heavy or too sweet (my biggest objection to most curries). My only complaint was that it arrived at the table a little colder than I would have liked, and the staff was kind of overwhelmed, so we couldn’t snag anyone and get them to reheat it. 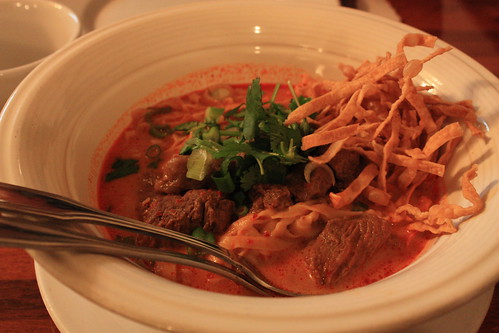 We took the waiter’s suggestion and order at Yum Kai salad for balance, and while it turned out to be my least favorite dish of the meal, it wasn’t bad. The chicken was surprisingly tender and moist, but I had hoped for something more veggie-based. 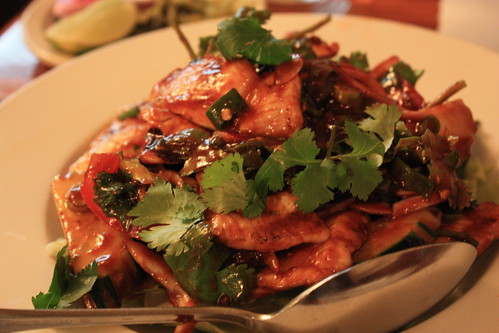 The Yum Kai felt less welcoming and more phoned-in than the other dishes.

Lotus of Siam is definitely good. I don’t know about the best Thai food in the U.S. – I haven’t eaten at every Thai restaurant in the nation (but as far as life goals go, that’s a good one), so I can’t definitively say.

And personally, I actually think that Pok Pok might be better. But the thing is, Pok Pok is in Portland – where you expect to find wonderful food. Lotus of Siam is in a frigging STRIP MALL. And save for this shining beacon of culinary excellence, there’s little else going on there. Perhaps that’s why the place is so fantastic. Because of the element of surprise. Because no one saw it coming.

OMG IT’S THE BATMAN OF RESTAURANTS. 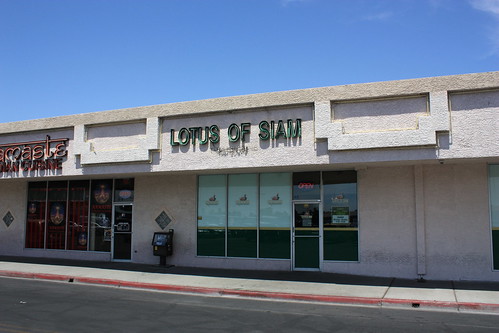 I enjoyed it for other reasons, too. The place feels so radically different from anything you’d find on the strip. It’s a little rundown and poorly lit. My menu was slightly sticky, and the dishes were mismatched. The waiter was knowledgeable and overworked and didn’t have immaculate hair.

The lack of pretension was palpable. Lotus of Siam is honest and direct, and their message is clear: This is our restaurant. This is our food. It’s really, really good, and you won’t have a minor coronary when you see the bill. 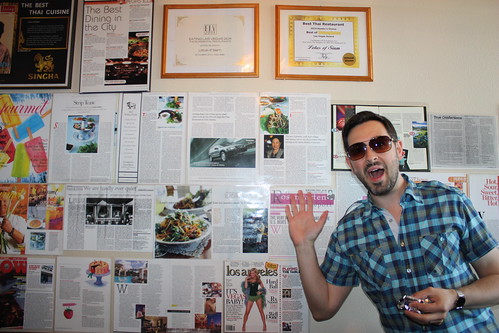 They do have an entire wall covered in awards and news coverage, but still, it feels humble. (Parenthetically, my husband is a total goober.)

Yes, it’s crowded, but most of the folks eating there are Vegas locals. Few tourists venture out that far. At tables adjacent to us we saw people on their lunch breaks, including an entire table of police officers.

Like I said, it was completely unexpected. And while it might not be the best Thai restaurant in the U.S., it could easily be the best one in Vegas. It’s certainly the most honest. And after enough time on the strip, after enough days weaving through fake tans and fake boobs and fake blue skies, a little bit of dingy sincerity is a rare and wonderful thing indeed. 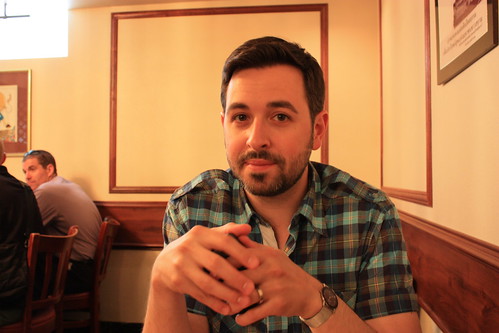 And one other thing I’ve found to be rare and wonderful.

Tips of visiting Lotus of Siam:

Reservations for dinner are highly recommended. They don’t take reservations for lunch, so you’re far more likely to get a seat, but you might have to wait a little while for it (and they don’t serve lunch on weekends). Take a cab or a rental car, and exercise a bit of caution, as the restaurant is not (according to one person we spoke to) in the best part of town. They’ve got a good selection of Northern Thai delicacies, which are far different from what you’ll find at many Thai restaurants, and definitely worth a try. The wine selection is supposedly excellent, but we didn’t partake.