I know it’s not technically Friday, but I’m hungry and thinking about food right now, so time means nothing to me. 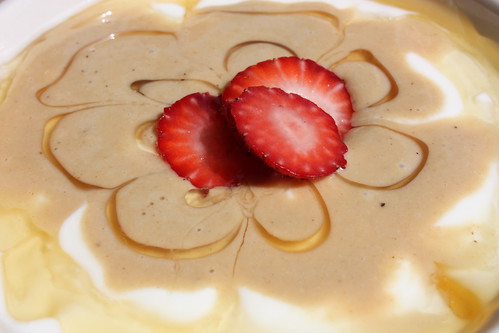 There are statements I never thought I’d say. But after enough travel, I’ve started saying them.

To a maintenance man in a New York city hotel: “Oh no, I’m happy to plunge my toilet myself.”

Or, to a girl with whom I switched airline seats, so I could be next to Rand: “Can I have your middle seat for my aisle?”

Or the phrase that escaped my lips as I sat in the Blue Scorcher Bakery and Cafe in Astoria, Oregon:

“Oh. My. God. This is the BEST yogurt EVER. Rand, try this yogurt. It’s amazing.”

I mean, seriously, who the hell could ever imagine saying something like that? It’s yogurt, people. It can only get so good. Right?

But this yogurt. YOU GUYS. THIS YOGURT. I CAN’T ACTUALLY FINISH THE SENTENCE OR USE PROPER GRAMMAR BECAUSE THIS YOGURT.

It was a chilly grey morning (which, to be fair, is the only kind of morning you can get in Astoria) when we popped into the bright, window-lined cafe for breakfast. We were heading to Portland, but once inside the Blue Scorcher, we already felt like we were there. Groups of tattooed and pierced young hipsters sat around, dressed in fleece jackets and flannel shirts (for it was May, and we live in the Northwest), many of them munching on vegan-friendly and gluten-free alternatives.

None of the serving dishes or flatware in the cafe match. They look like they were pulled out of a cabinet in someone’s college apartment. It makes you feel like you’re hanging out at the home of an incredibly organized and sanitary hippie. 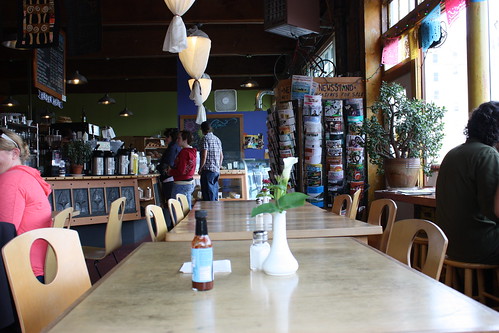 Rand got poached eggs, which came dusted with paprika and a sprinkle of parsley confetti, and a few slices of toasted homemade bread. His cappuccino came in a giant, handcrafted mug with someone’s name and the year scratched into the bottom of it. 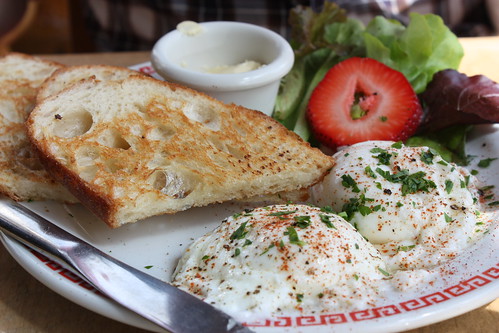 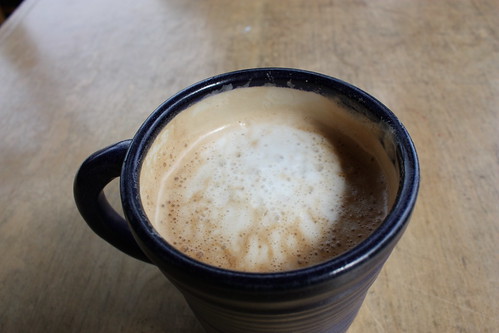 I ordered the Persian yogurt – it was topped with tahini, honey, and rosewater. 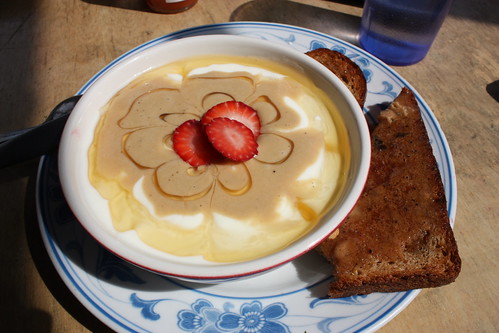 The tart yogurt cut through the cloying sweetness of the honey and tahini. It was at once dense and light and BLAH BLAH BLAH. I’m sorry – I had a whole paragraph written, and believe me when I tell you it was poetry, but I deleted it, because it didn’t get to the heart of what I wanted to say, which is this:

I could have eaten a BATHTUB of that yogurt. And a couple of loaves of the toast alongside it – some kind of grainy, hearty bread with a mixture of honey and butter on top.

I know, I know. I have no clue what’s wrong with me. I’m the sort of girl who takes her toast with a generous scoopful of nutella. When asked how I want my eggs, I tend to say, “Whisked into a crepe, then smothered in strawberries and whipped cream.” I once ordered pancakes and followed it up with another order of pancakes. I can’t be appeased by something as healthy as yogurt.

SERIOUSLY, BLUE SCORCHER CAFE – WHAT IS THIS SORCERY? WHAT HAVE YOU DONE TO ME?

And in true evidence of how good it was, as I took the first bite, the unbelievable happened: 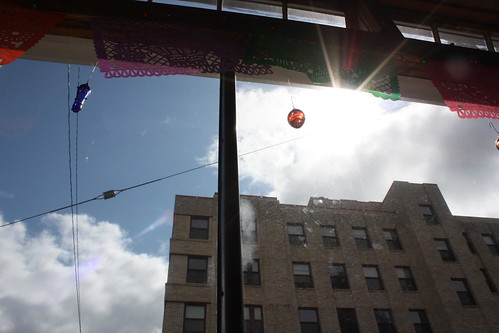 The sun came out. In Astoria.

I promptly began repenting, because clearly this was a sign of the apocalypse. Rand was not amused. 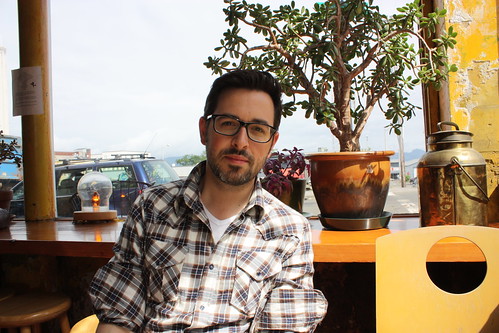 "Please stop confessing your sins at the breakfast table."

But so much strangeness was happening that morning. So many things uttered that have never been said before.

Forgive me for assuming the world was ending. But it was really that good.